Ahh Bop It, simply hearing that name brings back memories of childhood and desperately trying to twist, pull and bop my way to some far away goal. The nostalgia market is one that gets a lot of attention, and for good reason. Who doesn’t want to escape from rent and bills by remembering a simpler time when lollies were a penny and the streets were safer?

Bop It doesn’t go this far back, but it certainly does a good job of bringing back my childhood.

Adjusting from a solid, real life Bop It to a virtual one is odd, but that is to be expected, it makes it easier. Especially on an iPhone, all it takes is a small movement of one or two fingers to make a move and that makes it so much easier for when the game gets faster. However, it also loses that tactile nature and apart from being missing that cool, brightly coloured plastic underneath my hot little hands, it also means you can’t play with your eyes shut like a badass. 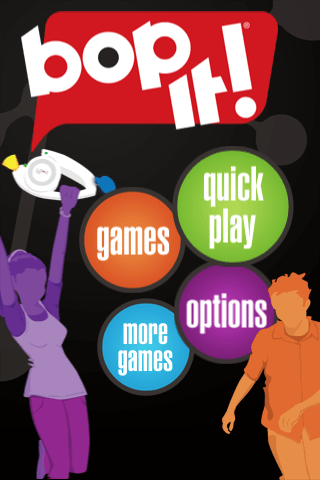 There are four different modes in Bop It in solo mode. Classic, Basic, Extreme and Blitz.

Classic Mode
Classic mode for me was one of the easier modes. It’s basically just the old Bop It, with a Bop, Twist and Pull function and you do each as quickly as you can after being ordered to do so. There are only the three Bopjects (Bop It objects for those of you who aren’t good at portmanteaus) so you won’t find yourself forgetting what each one means, and the fact that you just try and do it as quickly as possible without caring about the beat makes it pretty easy going. 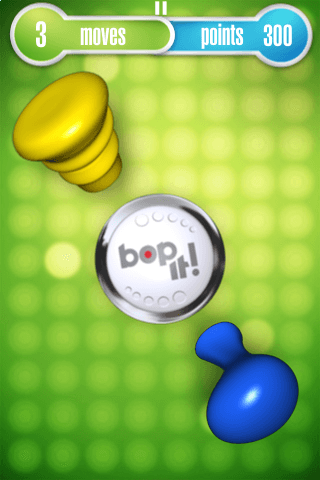 Basic Mode
Basic mode was a step up from Classic, because there are twelve Bopjects in total, some which have similar controls and some which you can get completely flustered in all that Bopping action and forget what you’re meant to do. Still, it is pretty easy since only one Bopject is on the screen at a time. It also includes a rhythm function where you get higher scores if you hit it in time with the beat. 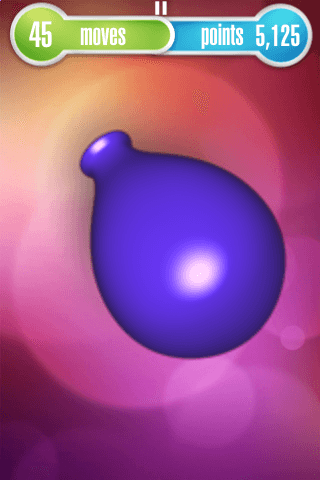 Extreme Mode
Extreme is pretty much basic but harder. Instead of showing only the Bopject that you need to activate, it shows all of them around the Bop It button and results in a stress attack as more come along and the music gets faster and you’ve forgotten what to do what with what and what now? And make sure you get it in time with the music! Although as it gets faster it tends not to matter as much because you’ve only got a limited amount of time to react anyway. I did find that it glitched sometimes, I would accidentally swipe the wrong corner but it would register as a correct move anyway, those are the kind of glitches I like. It did make me feel a little bit dirty for cheating though. 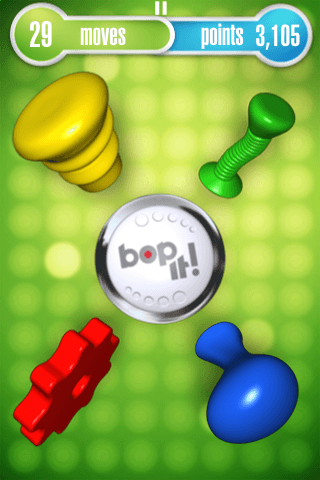 Blitz Mode
Concept wise Blitz is probably one of the easier ones, but I found it quite stressful. There is a timer going and you have to do what is ordered of you as fast as you can. The goal is to get up to 20 moves successfully completed. If you do the wrong move the screen just shakes and there is a tiny delay until you can start again. My aversion to it is a personal thing, I tend to hate any time-sensitive things when there’s a timer staring me down. 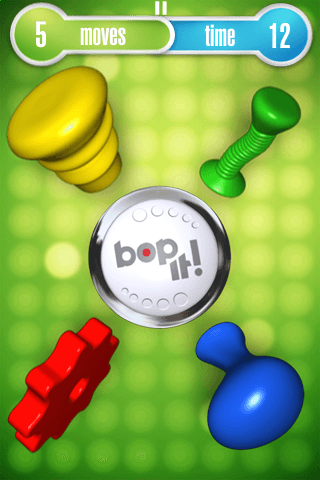 The multiplayer has games based on the same concepts, with pass and play for Basic, Extreme and Blitz. There is also Head 2 Head where each player as a side of the screen that is theirs, each with their own Bopjects, and the Bop It button in the middle is up for grabs by either side. Head 2 Head is probably best played on an iPad, since it can get a bit squishy on an iPhone and result in some finger injuries.

Each Bopject is independent of others, unlike the original game where it was one long interactive object. They are simple 3D models, that being said, nothing more is required. The style is like the original, fun, colourful and simple. Some of the new Bopjects are odd, some are inventive, and some are just weird.

The audio is a simple soundtrack with a male voice instructing you on what to do. As you get further into a level the music gets more frantic and his voice goes up in pitch until he sounds very odd and quite unmanly. You have to keep the sound on in this game, not only to know what to do, but to keep with the rhythm of the beat for Basic and Extreme modes. So if you plan to do this in an environment where you don’t want others to hear what you’re doing make sure to bring headphones.

Bop It is quite a fun game overall, it’s good for competitive people who will constantly be striving for that quicker time or better score. It doesn’t hold much of a candle to the real-life interactivity of the old game, but that’s the pitfall of nostalgia games. It does a good job of emulating it as much as it can, and this is definitely a great game for the next generation. The only thing is it’s one of those games that you kind of have to play with other people, otherwise it gets super-repetitive and apart from the trophies and unlockable Bopjects there’s not much to keep you hanging around.

I give Bop It!