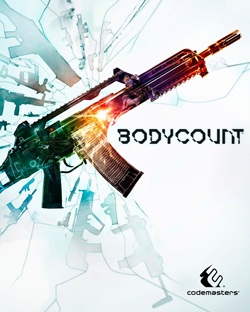 This article is coloured by the fact that only two days after I received my review copy of Bodycount the division of Codemasters that developed the game was shut down, leaving 66 people jobless. Whilst Codemasters emphasised a ‘restructuring’ to focus more on their racing titles, it’s obvious that Bodycount’s lack of commercial or critical success played a part in the closure.

The game has failed before I’ve even begun, but that’s no reason to ignore it. 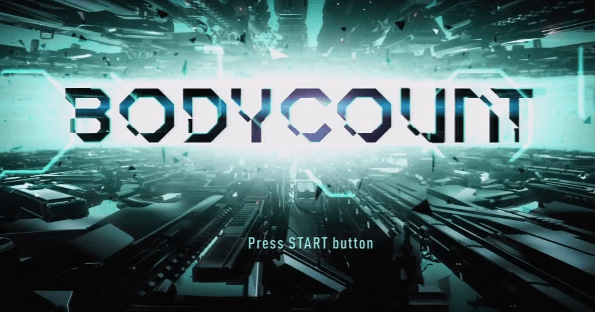 The world is a horrible, corrupt place, where dictators and criminals who commit murder and genocide are punished by pathetic trade sanctions and political cold shoulders. Governments and political bodies are useless when it comes to dealing with the problems of the world, so that’s where the Network steps in. Playing as one of the Network’s operatives, it is your duty to solve these highly complex, multifaceted issues with LOTS OF GUNS.

(I hope it’s satirical, I really do )

Initially dropped into an African nation in the midst of a civil war, it is quickly discovered that one big bad organisation is behind all the evil goings on – the Target. Also named from the ‘enemy’ page in a thesaurus is the big boss of said organisation – the Nemesis. The rest you can fill in for yourself, fight through the lower ranks, eventually take down the organisation. Boom.

A set up like this is ripe for some humour, but Bodycount never really capitalises on it. The tongue in cheek side of it should have been amplified, but the disembodied female voice that gives you all of the plot details is strictly for explanation, not entertainment. Learn from Portal – narrators can be more than that! It would have been a great selling point for Bodycount if the whole thing had been turned into a full on parody of the FPS genre.

As it is, the plot is standard stuff that never really registers. It’s clear enough to know what you’re supposed to be doing, but don’t expect to care about anything more than the next gunfight.  It is a refreshing change not to be bogged down with overly serious end of the world exposition though, so points to Bodycount for trying to keep up a lighter feel than some of its competitors. 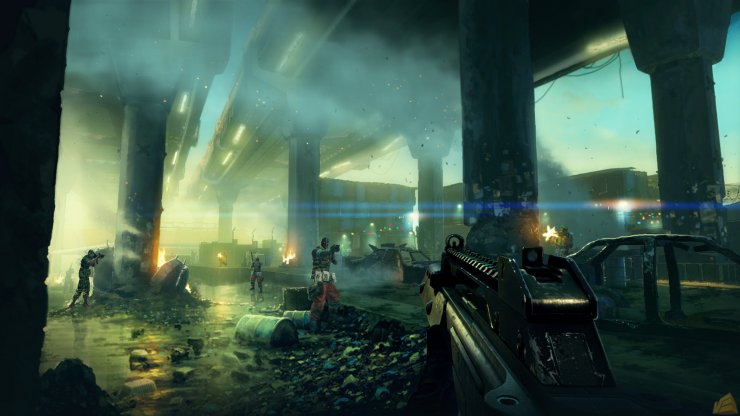 The control system definitely sends out warning signals from the off. In the PS3 version the trigger is mapped to the R2 shoulder button and grenades to R1 – the first enemy I ran into promptly had a grenade thrown into his face point blank as I wandered why the heck my gun wasn’t firing. The cover system is hampered by a drunken wobble that seems to strike whenever peeking out from behind objects that aren’t perfectly flat, and works in the clunky fashion of move to object, press crouch to hide behind object, etc. Bodycount is the first game in a while where I felt I actually had to learn the controls, to get used to them before they made sense. Sure the issues are all fairly minor and not exactly game breaking, but a little bit of counter-intuitive control goes a long way when players expect to roll smoothly into the action.

As well as the usual duck and cover, shoot it all gameplay, there are four power ups on offer. These are all linked in to the gathering of ‘intel’, the curiously named blue orbs that enemies drop when you kill them. Fill up the intel gauge and you can unleash an airstrike, an EMP, explosive rounds, or even become bulletproof. Aside from mission objectives and big health bar enemy fights (AKA boss battles) the only one I found useful was the timed invincibility.

The gunplay in Bodycount can be great fun, and is at its best when you just blast through it and let yourself react first, think later. The chaos can ratchet up as you’re caught between two sides, and I often found myself jumping into a building to recover from one onslaught only to find half a dozen of the other side’s soldiers right behind me. That’s when the special powers come in handy, triggering a brief bout of bulletproof can’t-touch-this-ness and obliterating the whole lot. Ammo and grenades are in copious supply, so you’ll never run short of ways to liven things up.If you do get caught unawares the respawning is super fast, although the enemies that got you in the first place will still be there – so try not to die in close quarters surrounded by six guys – they’ll be there when you get back!

Strangely the game’s scoring system encourages a more measured approach to combat, with better end of level grades coming from a series of skillshot kills that boost your bodycount multiplier. Skillshots are basically anything deadly that isn’t a straight bodyshot, so grenades, headshots, shots through cover and explosions are the way to go for the high scores. Headshots are generously given, but racking up the best multipliers is dependent on slowing down and neatly picking off enemies, which I found a bit at odds with the general ‘shoot everything to hell’ attitude of the game. 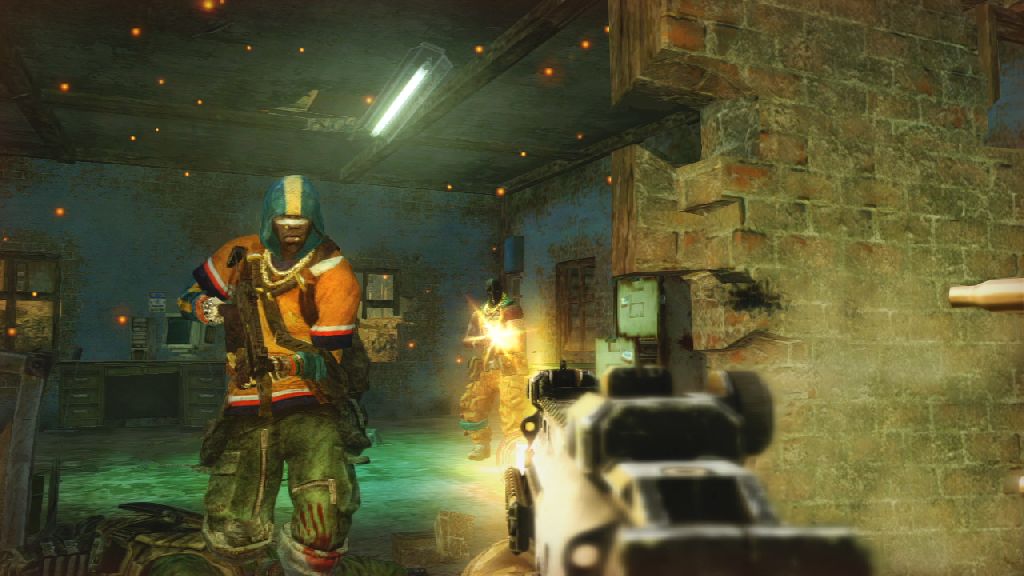 The enemy AI is at times kamikaze, at others blind. Enemies will charge at you head on through huge open areas, which makes sense for the explosive carrying mercenaries early on but not the sci-fi super soldiers. Some seem to have a hobby of squatting down in the open to reload their weapons whilst you stand there filling them with shotgun shells. It’s an odd mixture! Some levels find you up against two armies, and whilst they do fight each other, there’s a bit too much of a tendency for them to all focus on the lone guy crouching behind the crate in the corner.

Given that Bodycount’s big selling point is destruction, that crate won’t last long. Although some things are mysteriously indestructible the effects are really well done, with concrete flaking off pillars to reveal the supporting steel inside. Most of the objects I gravitated towards for cover would be quickly shredded, so you have to stay on your toes. It can get a bit frustrating when nothing seems to be able to protect you though, and the game has a habit of throwing enemies at you from every side and from every doorway.

The Africa and Asia set levels are well constructed, giving players a lot of room to manoeuvre. It’s a shame that there are no collectibles or pick ups to be found though, the space is just there to be run through. The stages set in the sci fi base force a different style of play, pinning players into smaller rooms and narrow corridors that require a bit more consideration. The destruction system comes into play here too, smashing glass panels to break into some hidden cover.

There’s little variation in the missions, and most could be described by two words, ‘shoot everything’. There are attempts to break this up, calling in airstrikes to destroy comm links, ‘hacking ‘ into computer terminals (push square and wait!), but really it’s a case of going from A to B with your finger on the trigger.

As far as the multiplayer goes I can report that running around a huge map with one other player is incredibly pointless, but that was all I could find – Bodycount’s online mode is dead in the water. 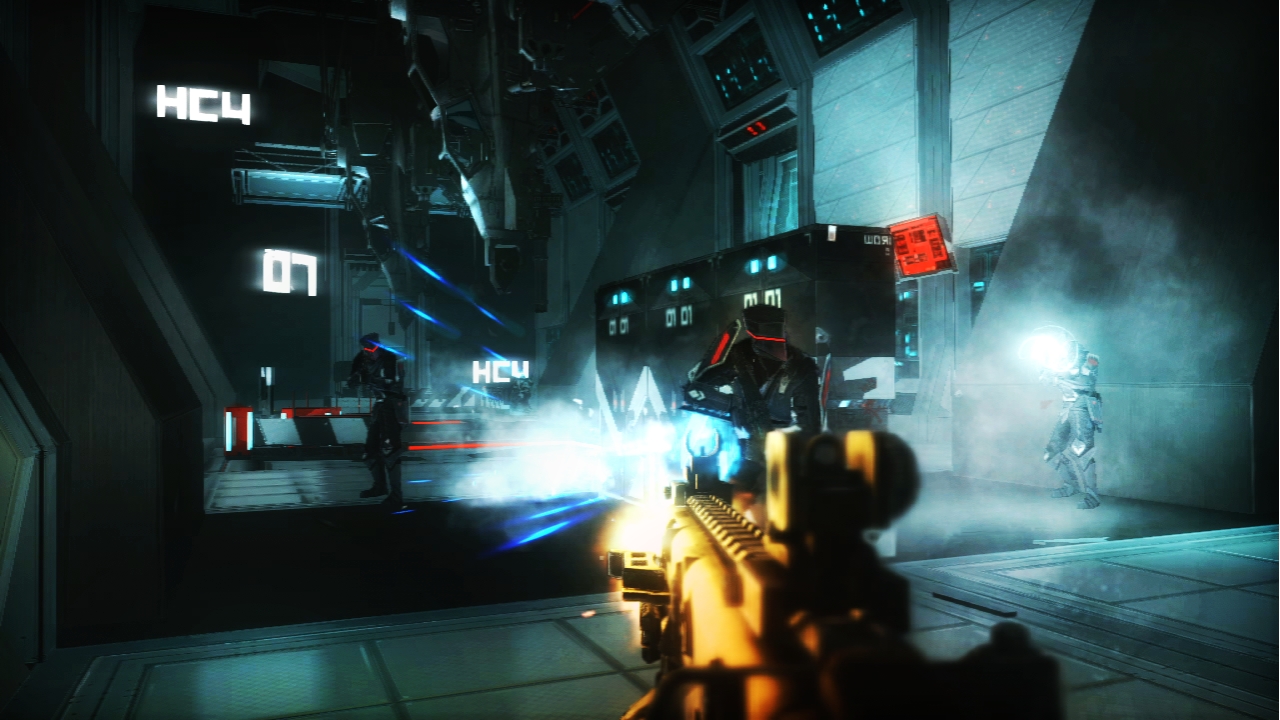 Graphically the game is fine, though it lacks the sharpness of some other titles. The Africa and Asia settings go in for a realistic style which has been seen hundreds of times before, although it does at least have more colour than it’s brown obsessed cousins. The Target base levels look like something out of Tron, all white and black and glass with neon lining. It’s completely at odds with the style of the Africa and Asia levels, and it really jars when you find a huge glowing white and red vault door in the middle of a rundown building made of splintered wood and corrugated iron. How on earth is that base supposed to be secret? It is all a bit bland after a while, and repeating the same handful of settings doesn’t help. The enemies suffer from the same problem of repetition, and in later levels can be a bit difficult to spot.

The sound is a strong point, and is just as it should be for the genre – loud. When the bullets are flying and the obligatory barrels are exploding it sounds great, and the music kicks in with some adrenaline pumping electro to let you know that what you’re doing is AWESOME. I was a bit unnerved by the constant chatter in the African levels despite the fact that nobody was around but other than that Bodycount does well for itself on the audio front.

Bodycount is by no means an awful game; the fire fights are a good dose of frantic, high energy fun, and the story is still an interesting one even if it isn’t used to its full potential. Yes it has problems, and the campaign is far too short to warrant a full price purchase,( especially with the lack of online community) but the main issue for Bodycount is the competition. What chance could it possibly stand against FPS juggernauts like Call of Duty, Gears of War, Halo, and Resistance? Some of these franchises have been running for nearly a decade, and have had all those years and numerous sequels to iron out the kinks and polish the product to perfection. Players have their own favourite franchise that they know and love, and it takes something great to pull them away – Bodycount just doesn’t have anything unique about it to do that. It’s a real shame that a genre can get to this point, but if you’re developing a new FPS there’s just no room for ‘OK’.

Bodycount bites the dust with a respectable: