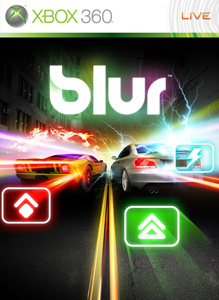 Singleplayer / story
“Blur is the ultimate racing experience, dropping you into heart-pumping, electrified in-the-pack action with 20 cars targeting the finish line and battling each other as they trade paint. Intense power-ups, including the ability to blast other cars out of the way with huge bursts of energy, as well as defensive shields, nitro speed boosts, and landmines create realistic damage and destruction. “[Via Xbox.com]

Singleplayer, on the other hand, consists of a bunch of tasks that you must get lights from. Complete in first, second, or third place for 5, 4, or 3 lights respectively. There are 2 more lights for completing the fan run in each level, and hitting a specified fan target. The only thing that ruins the singleplayer is the predictable AI. The AI isn’t as random as your average online player and this completely ruined the hectic feeling I found in multiplayer.

Mutliplayer / gameplay
Blur is all about strategy. Use powerups to attack, and save powerups to defend; all this while driving at 180+ Miles per hour. The game can also be played randomly and brutally, but you will find yourself constantly being shunted or barged.

There are a number of powerups. All of them do a specific task, but none of them a restricted to only attacking or defending. Depending on how you use the powerup and a little bit of imagination determines how far you get in a game. A shunt which can be used as a homing ball of fire to hit the opponent in front of you can also be used to counter another shunt locking onto you. Shield, which seems pretty self explanatory, can also be used to nullify the damage and slow down that occurs when you hit walls. Shield is the best tool when taking sharp turns, so you can glide on the wall rather than slowing down.

As you progress through the game you will unlock cars, mods, and game modes. There are a few problems with this unlock system; however, the problems cause the unlock system to be almost pointless. First off, multiplayer and singleplayer are governed by two different ranking systems, which means you have to unlock everything in singleplayer as well as multiplayer. You can also unlock many cars, but once you find your favorite car there won’t be much switching. Most people have one or two cars per class and that is it. There are tons of cars but only a few are actually use. It is a real shame, but it is true. Finally you can unlock more game modes as you rank up. Problem with this is as you progress higher less people are at that rank so less people play those game modes. The original 3 game modes are the most populated, and they are where most people spend all the game playing in.

Splitscreen multiplayer is awesome in this game. The developers were extremely thoughtful when they set up the options. Since you go to friends houses and bring the game with you, you don’t want to have to unlock everything at their place or bring a memory card to transfer your account and unlocks over. The developers have pretty much given you everything in splitscreen so you can cater the game the way you want it. They give you every single car, every single track and tons of options to optimize the way you play with your friends. Blur is a lot of fun with a group of friends. You’ll always remember those moments when that one girl screams in your ear as she gets shunted from behind or your friend breaks your controller in excitement as he finally beats you in a race. (Those two moments actually occurred with me) The ability to control what powerups are present is also a lot of fun, if you buy this game you should try a match with only lightning attacks.

The beauty of Blur comes out when you realize that you just made it out of a huge cluster of cars unscathed. As you swerve around a corner and then just barely avoid a mine lying right in front of you. As you swivel between 3 lightning attacks that everyone behind you just used. These hectic and crazy moments are what make Blur so much fun. Even when you have the lead, one false move or accident can cause you to lose it. Even to the last second of the race anyone can use an attack to cause you to fall behind. I’ve been victim way to many times to hitting a lightning right before crossing the finish line in first and falling back to third place.

Graphics and Technical Issues
I’ve been reading around, and people are actually complaining about the graphics in this game. Are you crazy? Seriously?! Sure, the graphics aren’t on par with some of the more “Realistic” racing games (Quotes on Realistic, because you are still playing a video game). There is a reason for these reduced graphics. The system can’t handle it. The console or computer you play on only has the specs to handle so much. Bizzare Creations reduced the overall graphics in order to support more powerups and explosions happening on screen at one time. While you may take it for granted that 15 of your opponents just blew up at the same time, there is actually a limit to how much is happening on screen at once. My friends and I put together a little experiment. We managed to set the experiment up to unleash 20 lightning at one time and a whole bunch of shunts. Once the graphical limit was hit, the shunts would fizzle out and do absolutely no damage to the other players and the lightning strikes would stop occurring.

Keep in mind that the situation above is literally impossible to manipulate in an actual game, and was only possible to acquire with only the shunt and lightning powerups turned on and having them set to permanently be up everywhere on the map. With the game set up like that, my friends and I were able to sit on the powerups and spam the button to release them. It’s nice to know that Bizzare actually foresaw a situation this hectic happen in a real game. The ability for so much to go on at one time is what makes the multiplayer Blur experience so much fun. 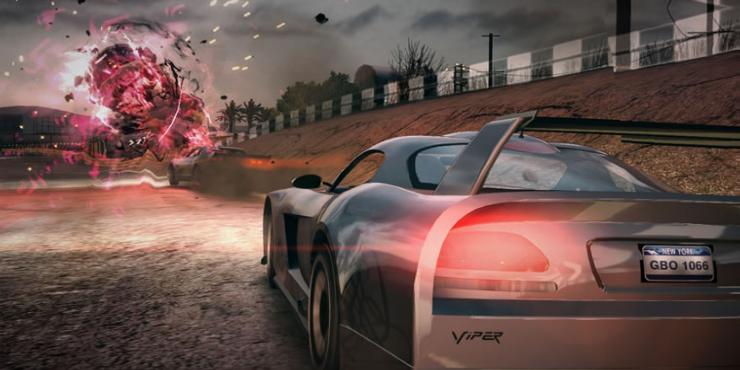 There are also 5 Avatar awards in Blur

Overview
Blur truly is Mario Kart for big boys. It takes all the fun of Mario Kart and makes it faster and more hectic. While the multiplayer is a lot of fun, the singleplayer seems tacked on and isn’t worth it. Blur is one of those games you buy solely for the multiplayer experience. Beautiful locations, fast cars, and everyone trying to kill you makes for an awesome racing experience.
I give Blur