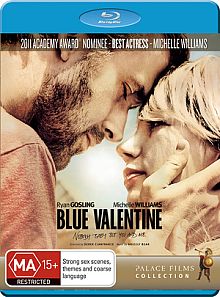 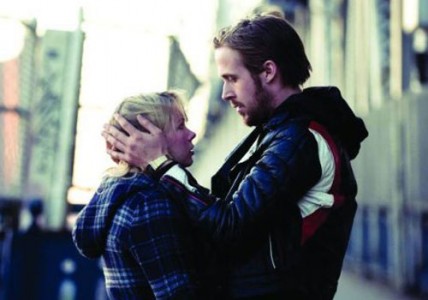 Most people think of happy, heart-warming, mushy ‘boy meets girl’ love stories when they think of the romance genre, but Blue Valentine is one of those rare films that spits in the face of the mainstream, giving us a more realistic, gritty, love story showing that love hurts and isn’t as perfect as we normally expect to see in the average hollywood film. Blue Valentine is a very complex and mature look at a failing marriage between Dean (Ryan Gosling) and Cindy (Michelle Williams) with very raw and realistic tones carried throughout, that will both warm the hearts of its audience and create feelings of discomfort. Writer/director Derek Cianfrance takes us on a complex journey of emotions, presented in a sophisticated manner that takes risks to challenge your feelings in ways you wouldn’t expect. Blue Valentine has been nominated for more than 15 awards including an oscar (Best Performance by an Actress in a Leading Role-Michelle Williams), as well as winning a bunch of other good stuff. Blue Valentine is definitely worthy of its acclaim and is a masterpiece in film making, although may not be appreciated by all audiences. Regardless, Derek Cianfrance must be commended on his work, as it is engineered to be a believable and unique look on love, and creates an effective and rare experience seen in cinematography. 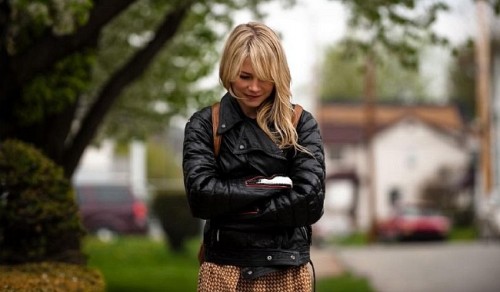 The story follows Cindy (Michelle Williams) and Dean (Ryan Gosling) who are a young, married working class couple with a daughter named Frankie of which Dean is not the father. Their marriage is falling apart and in a desperate move to revive it book a themed hotel for a night while flashing back to the days of which they first met. There is constant switching between the failing marriage filled with many depressing moments and the happier early days of the couple, and director Derek Cianfrance does a great job of balancing out the two switching between almost seamlessly while keeping it easy to follow for the audience. The story is told well with two amazing actors that fill their character’s shoes perfectly, creating believable situations and reactions that will impact its audience often it ways that will seem unexpected. As the story goes on, the way each character is presented changes, showing a vast, complex look into the personalities of each Dean and Cindy. There’s none of that cliché ‘this person is nice, this person is a bitch, good guy and bad guy’ thing, but rather more realistic and complex personalities that really will have you changing your opinions with every twist and turn. For example there’s a scene where Dean appears at Cindy’s work abusive, drunk and outraged which will make him seem like a bad person. However, in more earlier stages of the film, he is depicted as simple a nice, romantic fellow who just wants to keep his marriage happy and healthy. 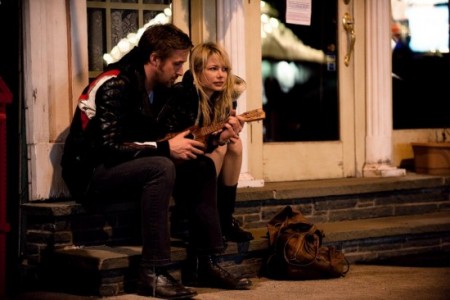 The dialogue is what really helps string the story and these characters together so well and the actors who preform it. Much of the dialogue is improvised, and on the most part works in favor of the movie. It creates this atmosphere of realism and believability making emotions fly high especially in heated arguments. In a few rare occasions where its easier to spot it doesn’t have such a strong impact, but it does work for the most part. The dialogue that does appear scripted however often can leave a lasting impact on you, with some lines that will show points of view and will make you think much like some of the more visual scenes in Blue Valentine. Take this quote for example:

I feel like men are more romantic than women. When we get married we marry, like, one girl, ’cause we’re resistant the whole way until we meet one girl and we think I’d be an idiot if I didn’t marry this girl she’s so great. But it seems like girls get to a place where they just kinda pick the best option… ‘Oh he’s got a good job.’ I mean they spend their whole life looking for Prince Charming and then they marry the guy who’s got a good job and is gonna stick around.-Dean (Ryan Gosling)

Blue Valentine contains a lot of detailed and realistic sex scenes that actually play a strong role in the film, as some of the most extreme points of plot come out here. In fact most sex scenes are not romantic or entirely sexual, but rather unenjoyable and end in arguments, somebody crying or an awkward situation. I can’t really say too much without giving away spoilers, but most of these scenes as well as a few others may disturb some viewers or make some feel uncomfortable or awkward. All I can say is that the actors make these situations pretty believable, and its often in these intimate scenes where the true colours of the characters come out and reveal sides of them you wouldn’t expect to see. While it may seem like Im criticising the film for this, my intent is to actually applaud it for these same reasons. A good film will make the audience feel something, and Blue Valentine did so effectively and strongly. Don’t think the entire movie is just a non-stop depression-fest though. The scenes of when they are younger and in love are also very heart-warming and romantic, and you do feel joy, which balances out the film as well. But these less uplifting scenes is what will impact you the most, and the contrast between the two stories of the birth and of the death of this love will leave you asking ‘what happened?’ and keep you engaged throughout film’s entirety. 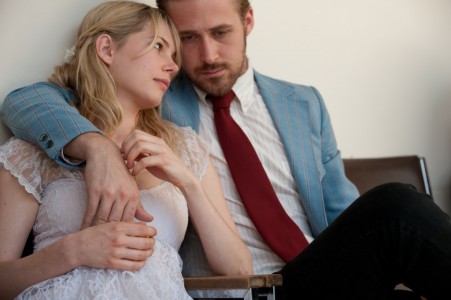 The film is scored by Brooklyn-based-based folk rock  band, Grizzly bear, and they’ve done a good job in doing so. Everything about Blue Valentine screams this underlining indie/hipster kind of feel to it, and Grizzly’s score helps to enhance that, giving it that unique, quirky and kind-of cute feeling in many scenes, in particularly the more happier ones. The couple have a personal song which stays true to the theme, a demo track by a group called Penny & The Quarters from the early 1970s. The trailer also contains an awesome romantic song sung by Ryan Gosling on a ukulele, originally by the Mills Brothers called ‘You Always Hurt The One You Love’. Check it in the trailer below!

There also tends to be more silences and less music in the more dramatic scenes, which actually places an emphasis on the acting, and you get this realistic tension between the actors you can’t really get from a soundtrack. Blue Valentine also features There is also many awkward silences placed throughout the film, and the director has chosen to keep these scenes continuing for uncomfortable amounts of time in the same camera angle rather than cutting away to another scene quickly. It really helps capture this claustrophobic atmosphere of the situations. This is just one of the examples of how Derek Cianfrance doesn’t play it safe with his directing, and how it does pay off well in the end. The film contains a variety of interesting camera angles, many of which often don’t seem to be the usual correct angle for a particular shot or scene, but it works effectively and places you in a feeling of what your not used to, but often can still appreciate. Many of the earlier happy scenes are filmed with a shakier, handheld cam feeling to it, and the failing marriage scenes being filmed with on RED and on a tripod, which helps to also capture the atmosphere, and gives it this documentary style feeling to it. Every shot seems well crafted to create this realistic feeling, but never feels crafted. Even the clothes worn by the actors seem believable. It’s not pretty, but Blue Valentine doesn’t want to be. 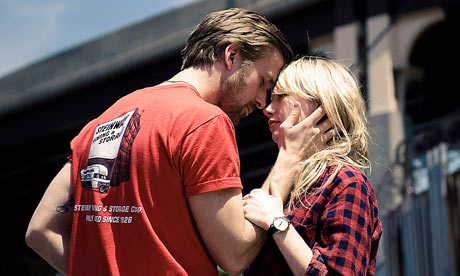 Special features includes an audio commentary, deleted scenes, home movies, a making of feature, a Question & Answer segment. The deleted scenes and the home movies are interesting to watch, but you can really see why a few if them are deleted as most don’t really add anything to the story or experience, but it does show the immense amount of work that went into filming it. What really stands out is the making of feature. They speak of how the film took about six years to make, and how Cianfrance got to know the actors personally and set up situations to make them get to know each other while in character on screen, and filmed to document them getting to know each other. After filming this, they waited six years to film the rest, and the married scenes had a shared history, as the actors had lived with each other for about a month to create the feeling of a home. Many shots were done in one take, so everything you see is quite realistic, which is why it seems so believable. Its really is an amazing watch, and if you see the film I guarantee you watch it as well, as it creates a whole new level of appreciation for Blue Valentine. There is also a very interesting Q & A which expands further upon that. 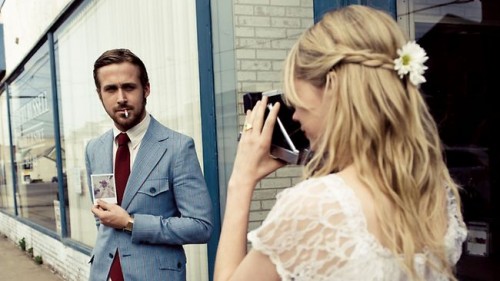 Blue Valentine is a beautifully crafted film that is unique in almost every way. It is not the feel-good movie of the summer, but rather a gritty and realistic look on the birth and the death of a love and marriage that is most likely unlike anything you’ve seen before. At times it may feel almost too real for comfort, and won’t be appreciated by all audiences, but it is truly a great film with two amazing actors led by some very impressive directing, packaged on Blu-Ray with an interesting Q & A and Making Of feature that demonstrates this well. Blue Valentine delivers experiences in unexpected ways, providing a unique experience in cinematography, that will leave a lasting impression on its audiences.