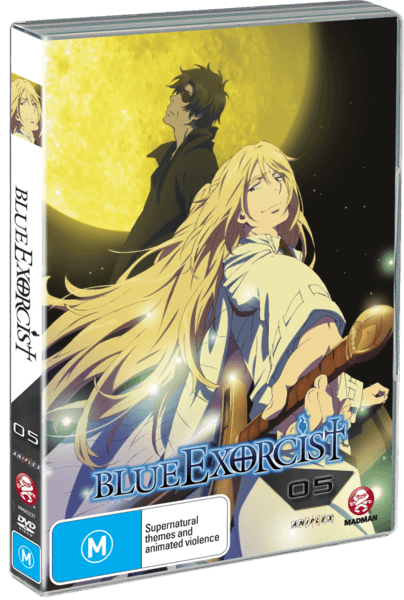 Overview
No matter what people say, they fear that which they don’t understand. And being half-human and half-demon is a pretty difficult concept to wrap your head around. Now if that causes some minor issues, like fear and caution, that’s bearable. But when fear inspires bold action, then there’s a problem. So Rin Okumura must, as always, fight to prove that his very existence is not a plague on humanity. Sounds easy enough… 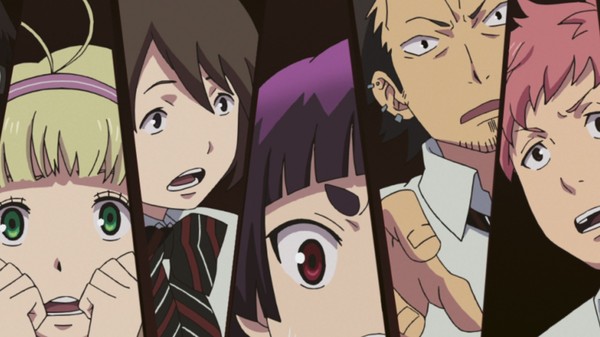 What is it this time?

Story
With Rin’s secret out in the open, the students of the Cram School continue to harbour fear and trepidation to the Satanic child. With their entire identities wrapped up in demon hunting and their hatred of the Devil, it’s a tremendous task for them overcome their own painful emotions. Konekomaru learns this the hard way when his own negative emotions threaten to damage not only himself, but each relationship he has forged at True Cross. Naturally, this serves as a source of conflict and yet another situation where Rin must do his damnedest just to prove that he isn’t a threat to his friends.

Volume 5 also contains a break episode in the form of a birthday party. Having used his “fortune-telling” abilities, Shima discovers that Kamiki’s birthday is approaching. Deciding that a party is in order, the class decides to celebrate her special day. Naturally they set out with the intention of holding a surprise party and Kamiki, being her usual paranoid self, begins to assume the worst when her friends hide their activities from her. Her suspicions begin to get the best of her and lead to some embarrassing situations and humourous misunderstandings. That being said, and this being Blue Exorcist, the episode also contains some hard hitting emotional moments that relate to the plot. It is revealed that Rin and Yukio, along with having no memory of their mother, don’t know where or when they were truly born. 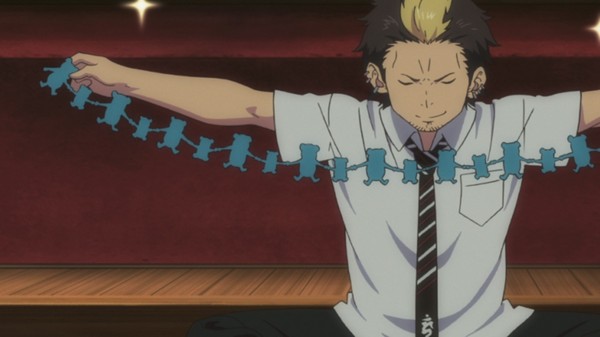 A man of many talents

As demons continue to attack, Rin and Yukio’s relationship is strained further and further as  the brothers clash. Rin’s act now, think later attitude serves as a constant source of stress for Yukio, who wants only to keep his brother alive. Yukio also begins to break under the pressure, showing anger more openly than he has before and acting less like his usual self. The by-the-books Yukio also continues to carry a secret that he hides from everyone, a secret sure to cause problems if it ever sees the light of day.

In the final episodes of the Volume, the final story begins to kick into gear. With the introduction of new characters and more screentime from the Vatican, all the pieces are set for one hell of a showdown. 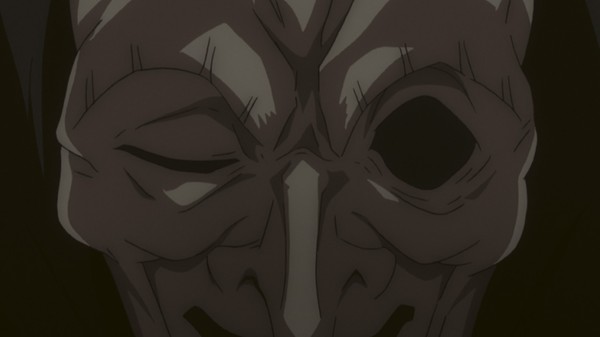 What lies under the mask?

Visuals
In contrast to Rin’s previous outbursts, his flames are quite visually different. As they always have they serve as an obvious representation of his emotional state and the chaos within him. As opposed to the raging inferno that consumed him in the forest, there’s a greater sense of control as he continues to train his abilities. As his proficiency increases they shift to a calm, haunting burn, softer than they have ever burned before.

During the numerous fights that occur during the Volume, the animation continues to exude an excellent sense of flow. Even when characters continue the tradition of mid-battle exposition the visuals remain interesting, rather than becoming stagnant. Each example of combat is also unique in their approach, with no fight being visually the same as the last, in no small part due to the diverse nature and physical form each demon takes. Rin’s combat style when dealing with said demons is also very acrobatic and involves a high degree of movement, something that requires impressive animation in order to be visually palatable. Which it is. 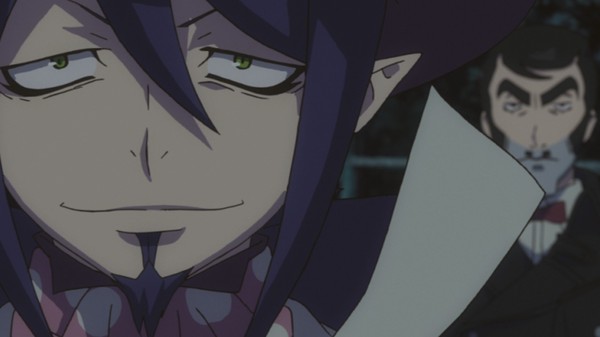 He’s right behind me isn’t he?

Audio
As always, Shira continues to be a source of inspiration and colourful language. During one of her patented pep talks to Rin, she simply asks him if he’s “Gonna let the bad guys jerk us around for ever?” Which is enough to inspire anyone into action. On the subject of voices, and harking back to some of the earlier episodes, the Guru demon Rin faces has a rather heavy voice filter. This serves to distort and garble the monster’s voice, inspiring fear when it does so much as ask a question. Nothing scarier than a giant shadow with reverb is there?

During the more intense moments of episodes, a lack of sound can prove to be just as important. By opting to not overlay a backtrack, focus is placed completely on the dialogue. It’s a little jarring, as the sudden lack of peripheral sound serves to sever the moment from the others in the episode, adding to its memorability.

Extras
Once more the extras bring an episode of Ura-Ex, everybody’s favourite glimpse into the less than dramtic daily lives of characters. This time around: Mephisto’s Dog Day. In an odd painted style, the daily canine routine of one Sir Pheles is expressed, shedding new light on not only him but also a conversation from way back in Volume 2. The alternate previews are, this time, performed by Gufu, Obarion (some kind of rock demon), Mechichi (who will “Kill you for reals”) and the masked demon. Plus your standard fare anime trailers are included as well. 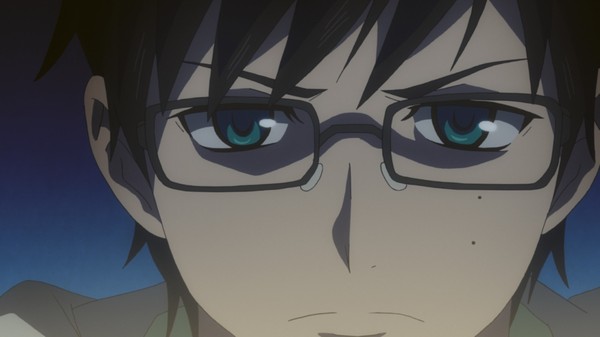 And he’s the nice one…

Overall
Blue Exorcist Volume 5 is a much more personal affair than Volume 4 was. Opting to focus more on the close relationships between characters, and putting the grand plot to the side for a moment, a lot more depth is added to the cast. Whether it be under the light of humour or tragedy, characters continue to evolve and show a greater understanding of the world in which they live. Though that knowledge might become obsolete in the coming finale. With the very foundation of society undergoing a shift, how will the world they’ve all come to accept change? When the Son of Satan holds a greater sense of compassion than the revered and sanctimonious Vatican, who knows what could happen next. A fight between good and evil? Most likely. But which is which?