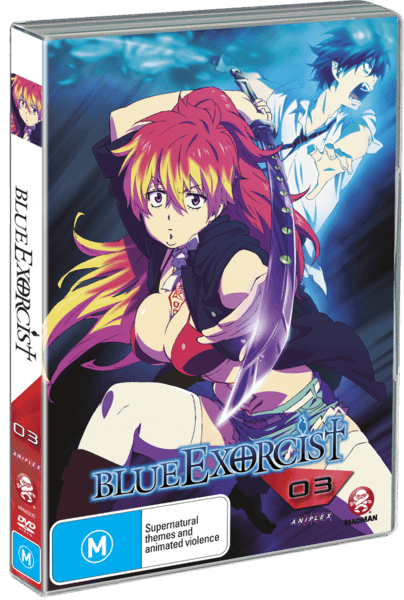 Overview
Being famous has got to be tough. Zero privacy. Someone always hounding you for something, do this, don’t do that. Tough gig. But if you think that’s bad enough, try being infamous. Same kind of problems, just with a lot more hatred and animosity. But this kind of thing is to be expected when you’re the son of Satan himself. Word gets out on that little nugget of information and there’ll be hell to pay. 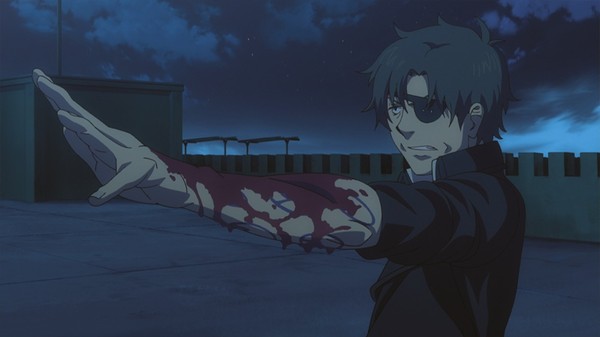 Seriously man, that does not look good

Story
With their previous battle from the finale of Volume 2 still fresh in their minds, the Okumura twins have a rather frank discussion about the nature of Rin’s power. Yukio notes how, as he lacks any form of skill or knowledge, he relies far too much on his brute force and the power of Satan. As such, he fears that Rin will lose control to his demonic heritage and his humanity will consumed by his own hellfire. Not something you can come back from.

In parallel to Rin’s own fear and uncertainty regarding his powers, a Cait Sith known as Kuro is introduced. Having lost himself to grief after discovering the death of his master, he goes on a rampage that threatens the peace of True Cross. When the Okumura sibling arrive to halt the ballistic demon, they both have different concepts of what that means. Yukio, as an Exorcist, sees that destroying it is the only way to peace. Rin on the other hand, possesses a little bit of inside knowledge. As a demon himself, it would seem that he has the ability to hear other demons telepathically. As such, he decides to save the demon from execution by calming it down. This showcases the scope Rin’s latent power as, stated by Yukio, there were no Exorcists in the vicinity who could control such a powerful demon. It also serves as a rather definitive moment for Rin as, not only does he reveal more of his demonic abilities, he uses his power indiscriminately for the purpose of good. Kuro’s fluctuating mental state, as previously seen in Ukobach, also depicts how some demons can exist in harmony with humans, with no desire to kill them to death…unless you piss them off. So don’t do that. 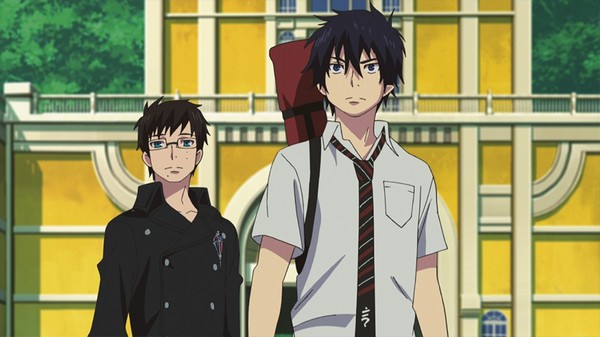 Is…is Yukio only wearing his trenchcoat?

As an anime, this series also naturally features a beach episode. No one said that fighting demons meant you couldn’t have a little R&R every now and then did they? Plus, as it features highschool students, expect some coastal shenanigans. Guys+Girls+Swimsuits=You get the picture. As Rin and Shima pine for the ocean, Kamika runs into a small boy who has bravado to spare. Anywho, the episode takes a turn for the violent when the demon of the deep rears its titanic head. Though clearly beginning as a humorous break episode, as so many series are fond of, Blue Exorcist sought to continue the story, rather than take an arbitrary divergence from the plot. The episode also serves to further the running theme that you shouldn’t judge a book by its cover, a fact which is becoming more and more important as the story develops. In that vein, more of Kamiki’s caring side is shown, going against her portrayed persona, noted rather succinctly by Shima as, “All tsun without any trace of dere.”

The final episode of the volume also brings the plot back rather forcefully, right onto Rin. In a battle of fun filled chaos (Note: The battle takes place at an amusement park…obviously) it is shown rather blatantly that there a some very powerful, and equally insane, demons out there. It would seem that Rin may have to train a little harder if he wants to stand against the elite forces of Hell. 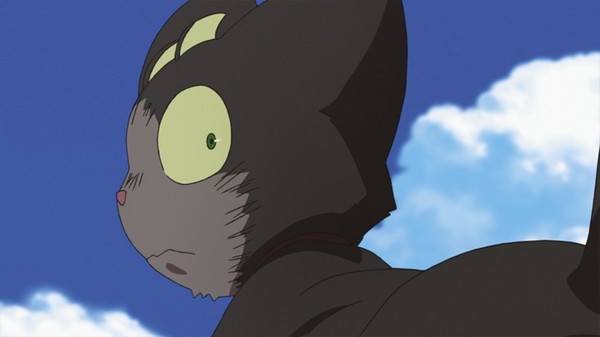 Eavesdropping can have catastrophic consequences

Visuals
As Rins powers continue to grow, the visual representation for his Satanic state begins to morph along with it. As his rage becomes more pronounced, his face becomes increasingly bestial, with his fangs lengthening considerably. The intensity of the flames he produces are also directly connected to his emotional state, ranging from a soft burning flame to a forceful blaze. On the other hand, his demonic form can also depict his more playful side, such as when he wags his tail when excited and not engaged in hellish combat. The Cat Sith Kuro also possesses an extremely emotive face, which helps immediately provide personality to the cute little demon.

CGI is also used in some episodes, though to a very minor extent. The most pronounced usage being the rides in the amusement park “Mepphy Land”. Though it does stand out against the animation, its sparse usage overall prevents it from being a major issue. 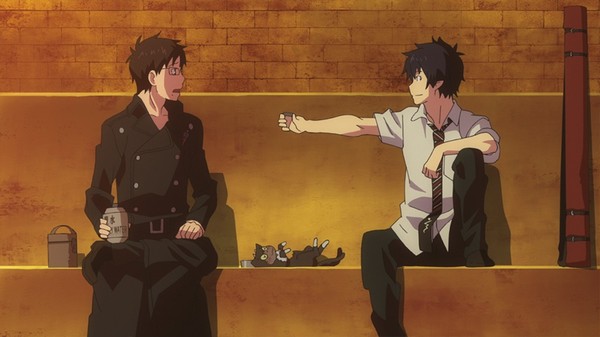 Audio
The English dub continues to be a source of enjoyment in regards to the interactions between characters. Rin especially. When forcefull tagging along on an official mission, he simply tells the reluctant Yukio “Tough shit” and refuses to leave. On the other hand, Rin is a tad more friendly to the Cait Sith Kuro and has calm telepathic conversations with him…most of the time. When speaking in such a manner, their voices are laced with a filter that adds the classic psychic echo/reverb to them, immediately identifying it as a telepathic conversation.

As some episodes also take place during the wonderful season of summer, expect to hear the classic anime representation of said time: crickets. This trademark sound, along with others throughout the episodes, serve to fill in the gaps when music is not present or simply not required.

Extras
The main bonus feature of Volume 3 comes with the inclusion of the only OVA of the series: Kuro Runs Away From Home. In this special episode, we are treated to the world of Blue Exorcist a experienced by Kuro. As the demonic fur ball explores the various locales of the anime, he runs into a number of characters seen in the series thus far. Though somewhat of a joke episode, it also possesses an underlying seriousness which definitely makes it worth watching. Also included is the now to be expected Ura-Ex short, which this time around focuses on Bon’s early morning routine. The alternate previews this time around are handled by Kuro, the Demon of the Deep, and the Ghost Boy respectively. Also your typical anime trailers are there. 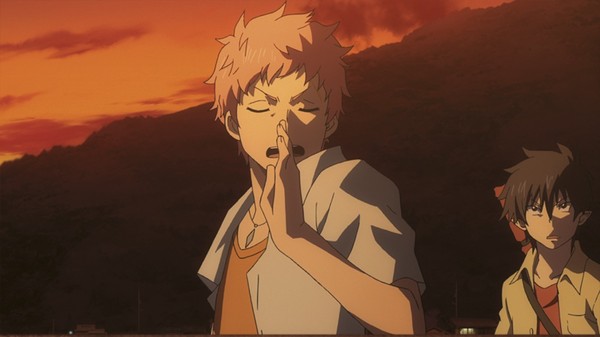 When in doubt, be devout

Overall
Blue Exorcist Volume 3 comprises itself of the more overtly comical episodes of the series thus far. But to look at them as nothing more than that would be a mistake. Rather than falling into the typical anime trope of a pointless beach episode, characters continue to develop in this most cheerful of locales. Hell, the quirky theme park they visit is the site of one of the most intense battles to date. Rin continues to learn more about his “old man” and slowly begins to accept that he may just have been cool. Which he was. Seriously, that dude was a badass. The volume finishes on a bit cliffhanger, as more of the larger plot is promised with a last minute reveal. It’s pretty…memorable. You’ll see what I mean.