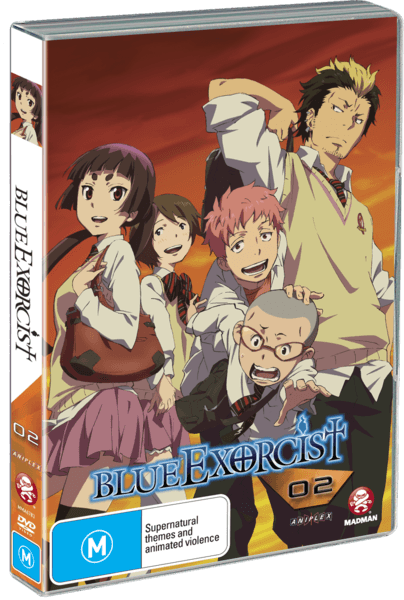 Overview
School life is tough enough as it is, everybody knows that. But what if on top of all of the studying and tests, you were forced to live in a dorm with your own twin sibling? Not only that, but you barely had enough money to feed yourself? Life sure can be tough sometimes…Oh yeah, also the school you’re attending is teaching you how to hunt down and kill the demons of hell that continually seep into the mortal world in order to inflict chaos, carnage and a little bit of old fashioned murder. Forgot to mention that part. 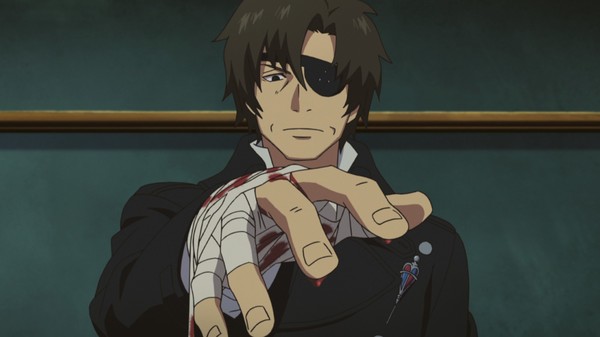 Story
As Volume 1 ended rather abruptly on what was just a regular episode, Volume 2 jumps straight back into the school life of our devilish student. As it would seem, he is adjusting to school about as well as you’d expect a slacker to…roughly. In classic anime fashion, Rin tends to wake up late, bolt for class and sleep through a majority of the important lectures. This blazay attitude toward Exorcism training serves to create a certain amount of friction between Rin and his more driven classmates. As he continues to attend classes, his obvious lack of basic Exorcist knowledge elicits some insults and questions from his fellow classmen. Though he possesses the power necessary to survive his training, his inability to use said power in public squashes any major chance he has to prove himself. In addition to placing him at odds with the more learned students, it also places Rin in situations he could easily escape from, though doing so would spread fear throughout True Cross.

As the school days march forwards, we begin to learn more about Rin’s classmates and their motivations, as well as their personalities. We have already seen that Bon, despite his outward tough guy appearance, is actually one of the smarter students in Cram School. This continues to prove true with his inate ability to memorise large quantities of information, a fact which upsets fellow student Izumo Kamiki. Dubbed “Polka Brows” by Rin, she believes her skills to be above those around her, much to the ire of the other students. We also see that shrinking violet Shiemi is trying her best to connect with others, longing for friends to call her own. It’s quite cute and also a bit sad. That being said, her desire to stand strong without intervention from Rin or Yukio shows that she does have a stronger side to her. 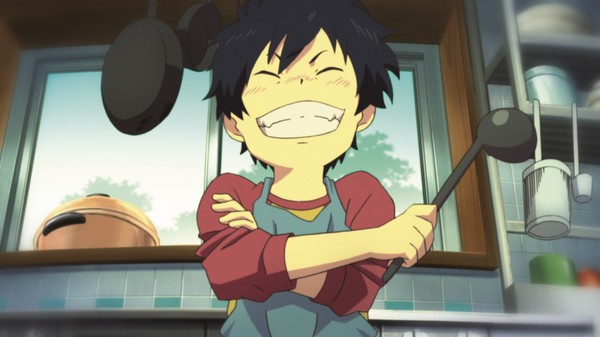 Rin is one hell of a cook

With their most basic levels of training completed, the students of Cram School learn of their next test, one that will upgrade them from the rank of Page to that of Exwire. Their preparedness for this advancement will be tested in the appropriately titled Exwire Exams. With a little help from Rin’s obliviousness and some good ol’ exposition, we learn of the various ranks one can strive for in their Exorcist studies. The branches one may venture into are: Dragoon, Aria, Doctor, Knight and Tamer. Each of these classes focus on different methods and styles of demon killing and are fairly varied. Dragoons take a more modern approach to the hunt and rely on various firearms to take down their quarry. On the other hand, knights take the classic approach and use melee and close combat weapons. Arias forgo weapons entirely and instead recite passages from the Bible to dispel foes, recquiring an impressive ability to memorise and a knowledge of each demon’s particular “Fatal Verse”. Tamers are Exorcists with the rare ability to summon and control demons, though should their willpower falter the beasts will turn on their master. Finally Doctors, though a non-combat role it is an inherently necessary role in a world where a demon’s sneeze can cause necrosis…gross. However, despite the variations in each branches’ fighting style, there is no limit to how many titles on may acquire. Yukio for example is both a Dragoon and a Doctor…overachiever.

With their futures and lives on the line, the Pages set out to Rin’s spacious and eerie dorm building for their Exwire Exam. However, when the situation spirals out of control, the students are left wondering just what to do. Luckily, due to the overarching theme of teamwork expressed in these episodes, the band of clashing students find that they can actually support each other pretty well. Meanwhile, Rin finds himself drawing more and more attention from mysterious figures who wish him harm…like, a lethal amount of harm. 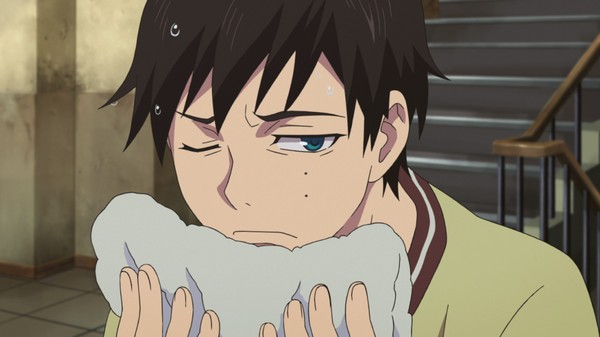 Not a morning person I take it?

Visuals
The demons are, as they have been, terrifying. That being said, those presented within the episodes are not as diverse a mix as the last volume. Each enemy fought this time around is of the ghoul class, hideous amalgams known as Naberius. Being that these creatures are the remains of multiple ghouls haphazardly sewn together, they are littered with stitch marks and possess mismatched forms. A further visual reminder that demons are gross and quite scary. However, there is some variation provided in the newfound summoning powers of certain characters. Though still demons, those summoned by the students vary greatly in appearance, not only from the Naberius, but also from each other.

Though limited in frequency, each of the fight scenes shown in this volume are animated fluidly. Combined with their fast paced nature, each moment of combat is enjoyable and interesting to watch. Moments where Rin utilises his latent demon power are also handled well from a visual standpoint. His feral face quite obviously expresses the violent nature of his abilities and the abrupt change that occurs within him. His striking blue flames also draw focus to him and serve to express his current mental state. They also keep battles well lit, which is a plus. 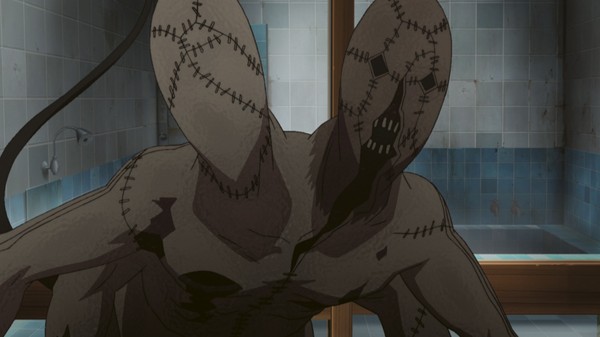 He seams to be quite terrifying

Audio
As a majority of the volume is spent in less than dire straits, the music is suitably calm and quirky. The more humorous moments are outlined by some of the more overlooked instruments. Bongos, scratching vinyl, even a cowbell, an honest to god cowbell, support the calmer visuals of the less demonically charged moments. On the other side of things, the intense combat moments again feature an operatic backtrack that is as cool as it is invocative of religious tunes…which is a lot.

The series also possesses a believable dub. Rather than simply appearing to have been transcribed, the series does an excellent job of translating dialogue into true to life English phrases and manners of speaking. Rin himself possesses the verbal acumen one would expect from a smartass slacker,  just straight up call Yukio a jackass at points. Which is awesome. This serves to better personalise each individual characters as, not only do they possesses a suitable voice, they possess a suitable vocabulary.

Extras
As with the previous volume, this release contains some of the humorous Ura-Ex shorts. This time around we witness the trouble Rin gets himself into when his tail is involved as well as just how much Mephisto enjoys Japanese pop culture. Hint: it’s a lot. Also included is an alternate preview for each episode, delivered by demons relevant to each previous episode. For example the Niberius. Finally you’ve got your standard trailers for other anime published by the same company. 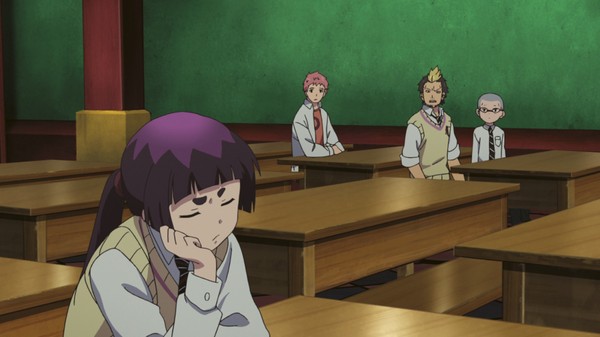 Can you guess who the mean one is?

Overall
Blue Exorcist Volume 2 sees the series break into its stride. The episodes become a little more focused with the advent of the Exwire Exams and shift the focus onto the class itself, rather than just Rin. This serves to add a little diversity to the cast as, in the previous release, we knew little about them individually. The groundwork for future friendships and confrontations is also laid down in these episodes, though it may take a while for any results to truly become apparent. Events towards the end of the volume also serve to pique interest in the larger plot that looms behind the scenes. Get ready for what’s to come…