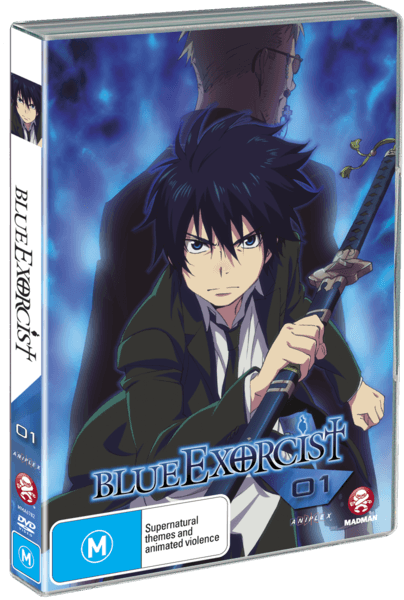 Overview
Throughout the ages people have feared the darkness, worried about what lurks out of sight. Monsters, ghosts…Demons. Most demean it as superstition…but what would happen if the creatures of myth were real? What would you do if the underworld came after you? What if there was more to you than you knew? 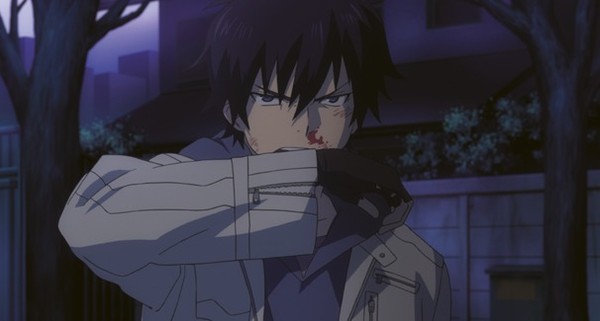 You should see the other guy…

Story
Raised in a church along with his twin brother Yukio, Rin Okumura lives a fairly normal life. Not a fan of school, he’s doing his best to find a job, to get his father off his back if nothing else. However, everything changes with a revalation, brought about by a lost scarf. Sort of, it is the first glimpse into the truth though. Helping a young girl retrieve said scarf, Rin notices an odd creature latched on to it. Though this is nothing compared to what follows. A bully whom he had dealt with the day before returns with a thirst for vengeance…an inhuman thirst. Far more twisted and sadistic than before, it all becomes clear when Rin’s father appears and performs an exorcism. Terrifying, but clear.

With demons gunning for him, Rin learns a horrifying truth: the identity of his father. Slightly more intense than an adoption, he discovers his dear old daddy is…well-known, in the worst sense of the word. Not just a demon, but the demon’s demon, the Prince of Darkness: Satan. At this revelation, Rin is understandably freaked out. After making it back to the church, naturally barricaded against the forces of the underworld, Rin’s father reveals to him a sword sealed with demonic power. His demonic power. Should he unsheath the sword, he will cease to be human, though his potential will be released. One hell of a choice. 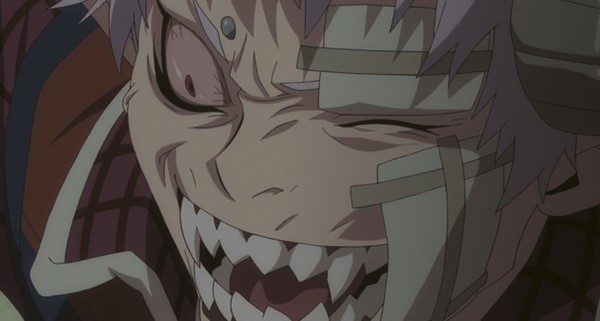 …now you should run

With his life turned upside down, Rin and his father get into a fairly intense arguement, with terrible repercussions. In an emotional turn of events, Rin’s father decides to enforce a little family reunion…by using his adoptive father as a vessel. The body count is high. It is revealed that the onslaught of demons desire to bring the newly revealed demonspawn home, to take his rightful place alongside the Devil. Quite understandably, Rin does not want to travel to the realm of demons and, with no options left unsheathes the Kurikara blade, activating his latent demon abilities.

After the life changing events of the days prior, the little heir-to-hell vows to go against the wills of his demonic father and, I quote, “Beat the shit out of Satan.” With that, the anti-christ becomes an exorcist in training. Evil did not see that one coming. Or good for that matter. With his goal set, the series begins to delve into Rin’s not so normal school life. Unable to reveal his true origins, he must prove himself worthy to the other students and his teachers. Due to his generally laid back persona, this becomes somewhat difficult. Rin also buts heads with a fellow student who has also made it his life’s goal to destroy Satan…small world. 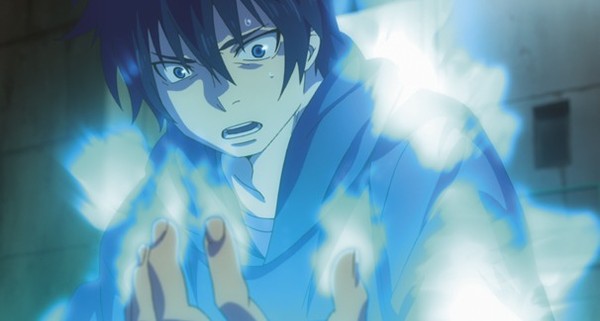 A sure fire sign that something strange is happening

Visuals
Being based in a world where demons dwell among humans, the visuals of the series can get…intense. Case in point, possessed humans. Being imbued with the horrible spirits of the underworld, possessed characters tend to have aggressive faces, constantly twisted into horrid snarls. Pronounced fangs, piercing eyes, and this is all before they transform…Oh yeah, they can transform. Being the biblical creatures they are, expect horns, claws and all of that generally evil imagery that denotes demons. Those not able to withstand said demon possession, have a much quicker demise. Insufficient vessels tend to bleed…a lot…from their face. This creates a pretty powerful visual scene, especially when the demon ignores the damage to said vessel.

Lesser demons also appear scattered across the screen, creating a mismatched force with a strong visual impact. This cacophonous grouping of creatures immediately expresses the forces of evil as a chaotic group that will literally crawl over one another to reach their prize. This is noted in the seemingly sentient demonic fungus that spreads over everything like a disease. Even mushrooms are dangerous and scary… 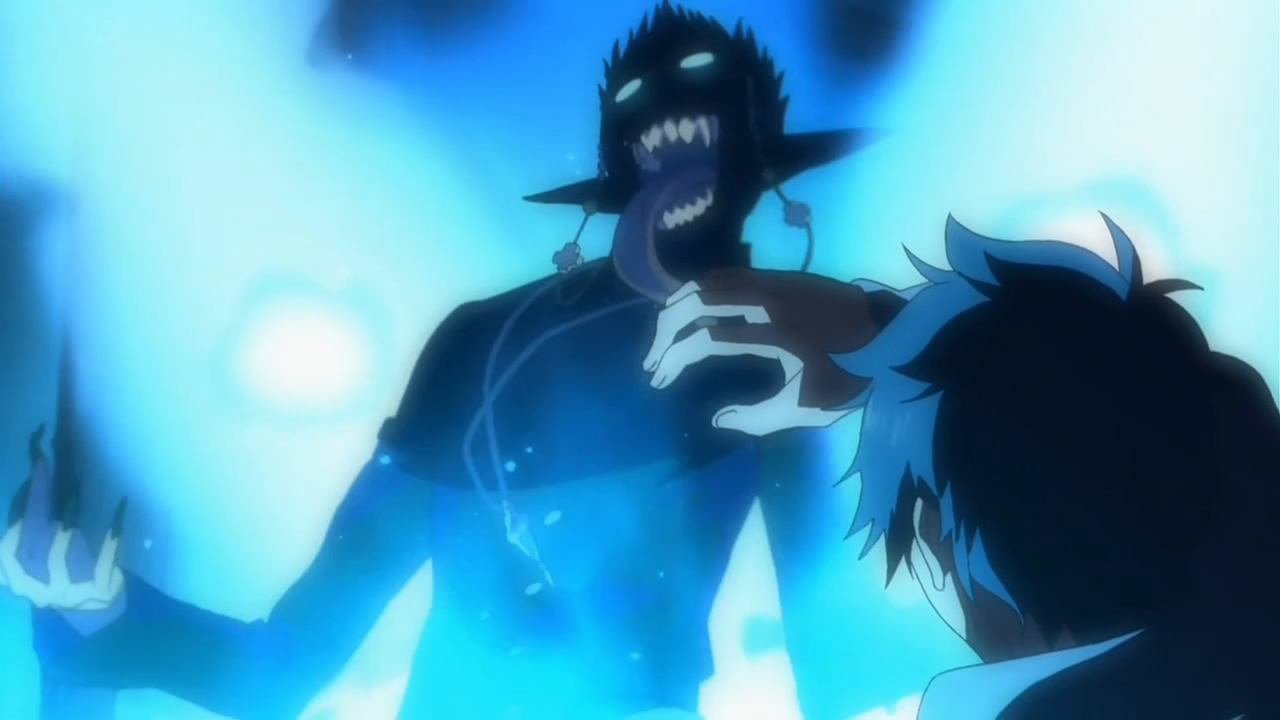 Better the devil you…no, this is bad either way

Audio
As can be assumed from a series that focuses on Biblical demons, the music behind some of the more intense scenes is notably dramatic. Certain moments are accompanied by some operatic vocalisation, immediately adding a grand sense to the scene, rightfully so when you’re dealing with demons forcing their way into the human realm.

The English dub of Blue Exorcist does an excellent job of in keeping up with the intensity of the visuals. The emotional range of the characters helps to sell the plot as a whole, creating memorable moments of dialogue and aiding in the creation of characters that occurs early in an anime series. The demons are also set apart from human characters through the use of a voice filter. This gives them an inherently dark voice, distorted from the human voices in the series. It also helps in personifying the demons

Extras
Blue Exorcist is fairly reasonable in its selection of extra features, especially for only five episodes. The most notable extra is the Ura-Ex bonus anime shorts. Running for about a minute each, these little side stories exist for their humourous look at, in this case, Yukio. Also included is previews of each episode in the volume as narrated by the monster of the week, once again a more humourous presentation than normal. The DVD also includes the Japanese trailers for the series, along with textless versions of the opening theme “Core Pride” and ending theme “Take Off”. 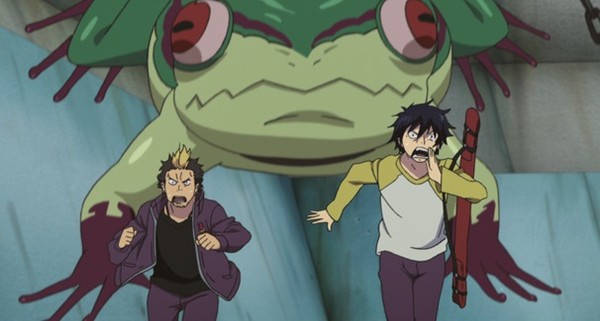 Evil comes in all shapes and sizes

Overall
Blue Exorcist kicks off fairly fast and powerfully. Within two episodes it jumps from  punk kid trying to hold down a job, to the son of the Devil enrolling in a demon hunting academy. One hell of a shift. The series itself is pretty intense in its representation of possession and varied in its notions of demons, immediately creating an abstract and interesting world. This being said, the Volume 1 collection kind of just ends. Only containing five episodes, the series pauses on a fairly regular episode. The series does subtly hint at some plot threads running in the background, though nothing revolutionary, at least not yet. All in all, Blue Exorcist Volume 1 is a great introduction into what’s looking to be an awesome series. If the main complaint is that there aren’t enough episodes, it must be doing something right. Probably the exorcists…and demons…it’s all cool really.