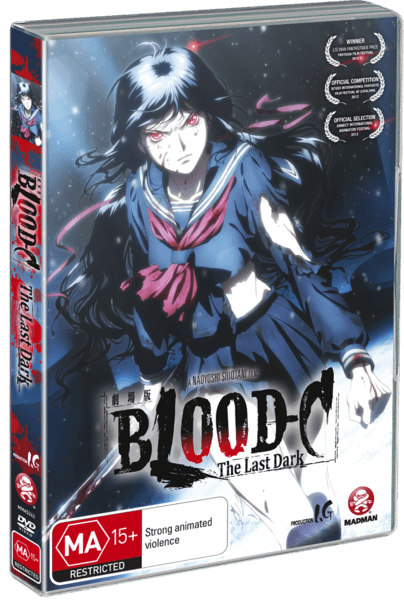 Overview
They say that revenge is a dish best served cold. They also say that hell hath no fury like a woman scorned. Saya Kisuragi proves the latter. Six months after the revelation that shattered her life, she has had sufficient time to question her existence and stew in her fury. Ready for vengeance regardless of the cost, armies, monsters and conspiracies will all fall before her blade in an explosion of violence and blood. With nothing but rage to keep her going, has Saya succumbed to her bestial qualities? Or is their still a spark of humanity buried in the chaos of her mind? 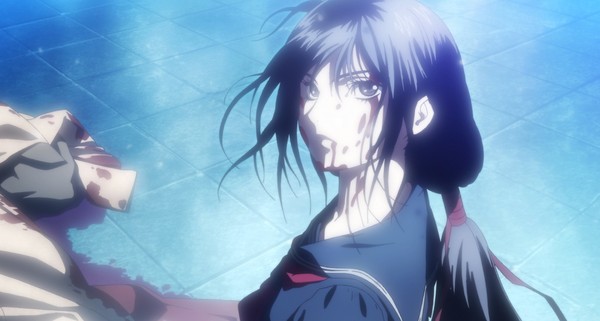 What seems to be the problem officer?

Story
Its been six month since the events of Blood-C transpired. The experiment. The massacre. Six months since Saya swore revenge on the man who played with her life: Fumito Nanahara. A man who can make a mean cup of coffee and also force you into a false reality designed to test you and keep you in check…not a nice man.

Her search for vengeance leads her to cross paths with a secret organisation known as SIRRUT. A small band of freedom and truth seekers, the group wishes to bring down the corporation Seventh Heaven, a cover identity for The Tower, which just so happens to be run by Fumito Nanahara. Having saved one of their members from an attacking Elder Bairn, Saya is accepted by the organisation, a choice which aids both. Saya uses this team up in order to get closer to her goal of revenge, ignoring SIRRUT’s other goals, such as lifting the curfews and  guidelines enforced on younger citizens. As the story progresses, both sides’ actions become bolder. SIRRUT’s attempts to hack into Tower systems increase in frequency and success, as they break into more and more secure sources. The Tower also escalates its search for Saya, controlled from the background by Fumito. This naturally leads to a system of escalating combat situations, culminating at the end of the film. 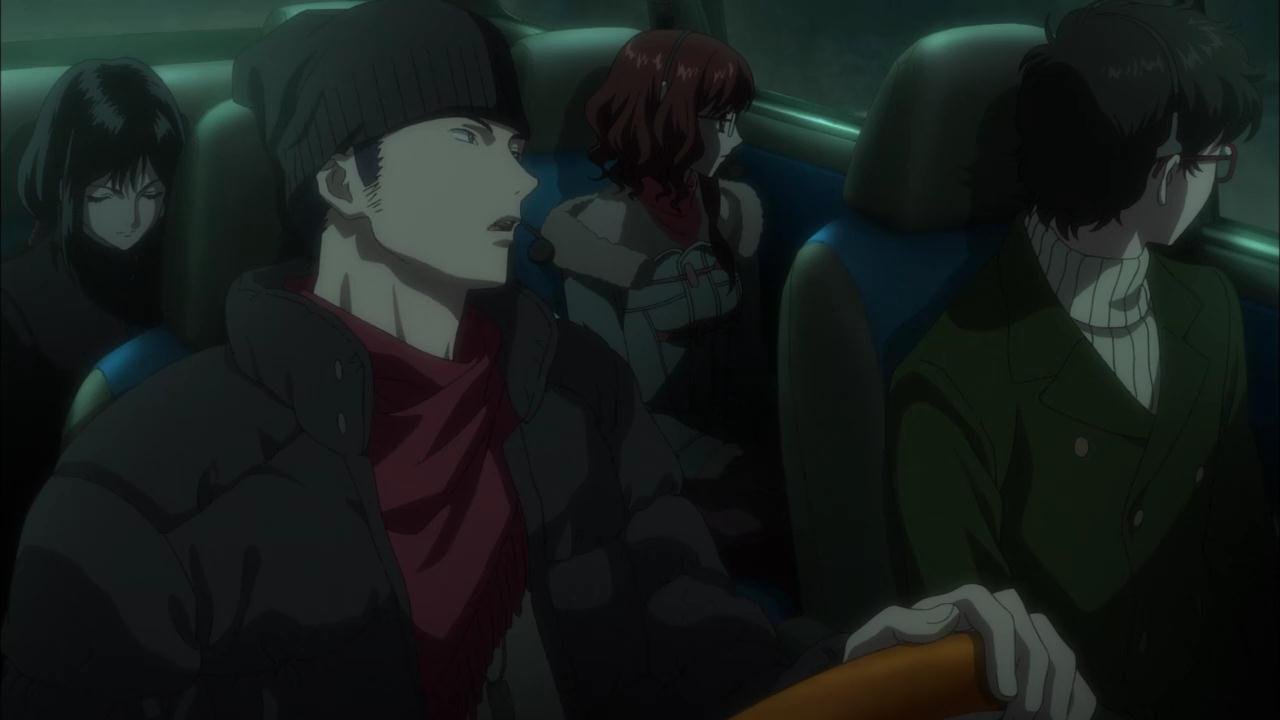 And on the left you’ll notice monsters and violence

The film also spends a great deal of time focusing on Saya as a person, as opposed to just an awesome Elder Bairn killing machine. Her relationship with Mana serves to slowly humanise her throughout the story. Coming into the story with the attitude she bore at the end of the series, Saya is still consumed by her desire for revenge and isn’t the friendliest person to be around. With the memories of her sweeter personality still in her mind, she still possesses the ability for compassion, though it’s buried deep. Ultimately, Mana serves as the foil to Saya’s gloomy personality, a role previously filled by Saya herself. Having lost her schoolgirl visage, Mana was needed to balance Saya and keep her tethered to the humans she somewhat relates to.

Though just as cryptic and unique as ever, towards the end of the film Fumito details the reasons he had for playing with Saya’s life. Even if they only really make sense to him, considering the scale of his plan, it’s interesting to see a character other than an Elder Bairn abomination causing chaos. Definitely a twisted relationship. Regardless, it’s nice to see that after all of the bloodshed and carnage, Saya receives some form of closure on one of the greatest tragedies of her life. 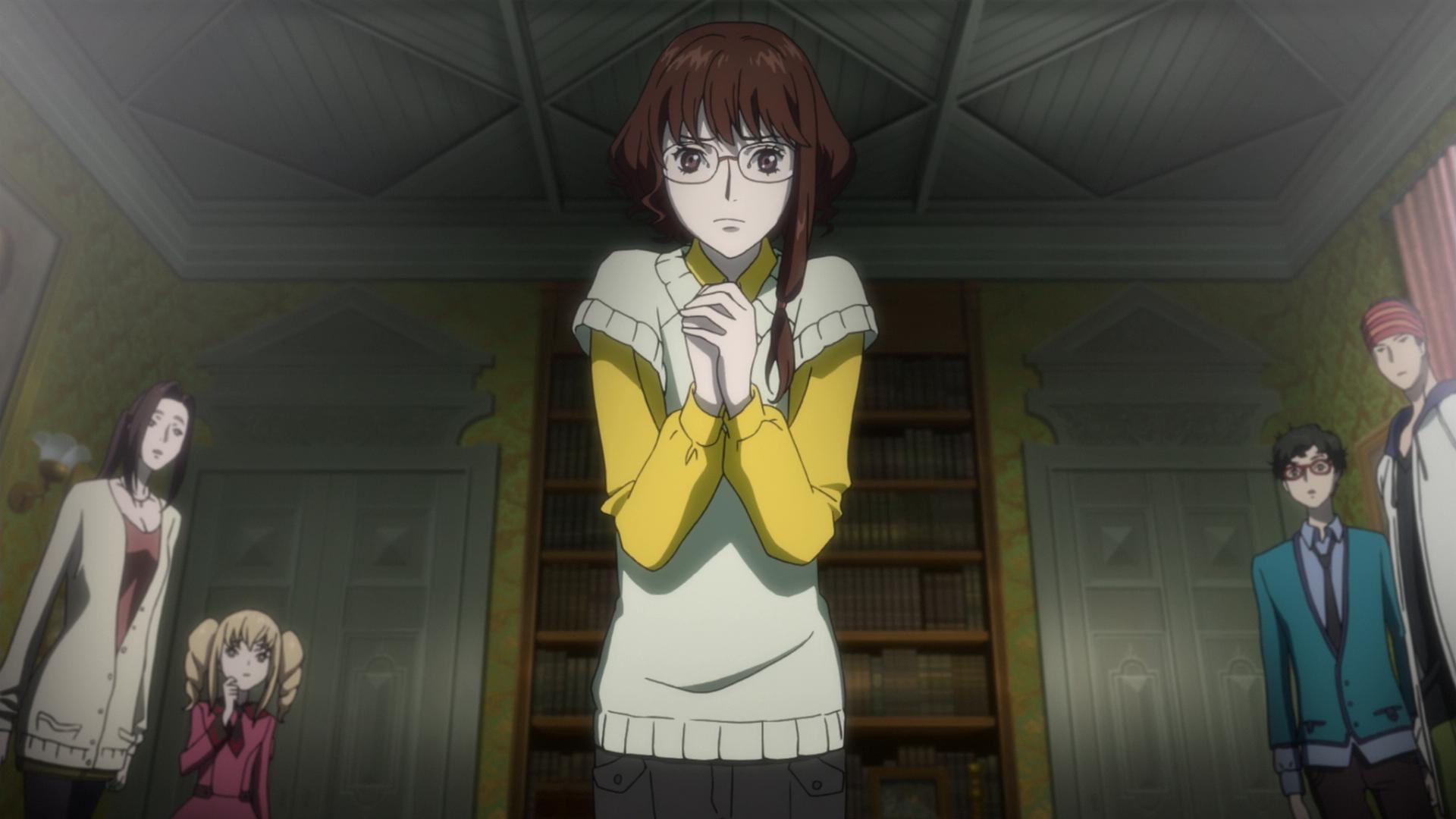 Visuals
The Last Dark utilises an interesting blend of visual elements throughout the film. The very first visuals shown in the film are in fact CGI, with the more traditional animation coming in soon after. CGI continues to play a rather large role throughout the entirety of the film. Background characters are always presented in such a fashion, whilst those central to the story or moment retain typical animation styles. Whilst this provides a clear visual contrast, it is not overly jarring. The two elements blend together fairly well and serve to give a unique texture to the film. One particular CGI elements towards the end of the film possesses much more polish than any other, serving to provide a very interesting and crisp visual. The film also utilises and manipulates light and shadow very well, adding depth and intensity to the animation.

Being the story that it is, the creatures that appear within the film are understandably horrid. The Lovercraftian creatures come a variety of horrible shapes and monstrous sizes, forcing Saya to react differently in combat. This serves to create unique fight scenes that are very visually interesting and impactful. Due to her lineage, Saya herself draws on the monster elements when she engages in combat. When rage consumes her, Saya’s eyes glow a vibrant red and her face draws into a more violent, almost bestial form. When this side of her awakens and an Elder Bairn stands before her, expect to see gratuitous quantities of blood. Entire environments transform into crimson artworks, splattered with the remains of enemies. It’s quite violent. 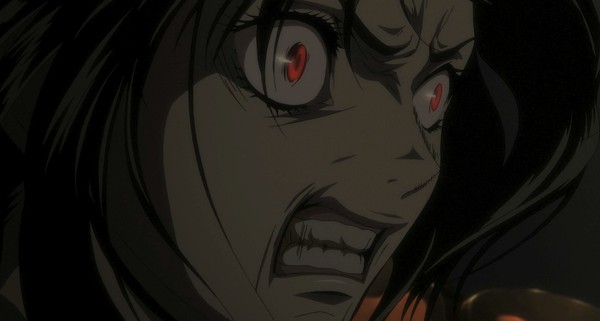 The face of pure, unbridled fury

Audio
In addition to the twisted visuals, each Elder Bairn possesses an inherently terrifying voice. Lacking any dialogue, the creatures simply growl, roar and otherwise vocalise their horrible nature. Though the visuals alone are intimidating, the almost pained screams of the Elder Bairns add a depth to the terror of each situation. When one partakes in a lively meal, intense crunching and sloshing sounds can be heard, adding and entirely new level of horror to an already vicious act.

The soundtrack itself matches the overall intensity that the film exudes. The use of instruments such as violins and trumpets, creates an orchestral element that possesses an inherently powerful emphasis behind it. The main musical piece of the film comprises of a very strong beat that hits just as hard as the visuals. Drums are also used to add a consistent tempo to the more prolonged, drawn out scenes, creating a link between differing visuals. In contrast, a complete lack of backtrack is also used to add to the dialogue. The environmental silence that arises, adds a haunting aspect to the more intense moments of the film, standing apart from the louder action sequences. 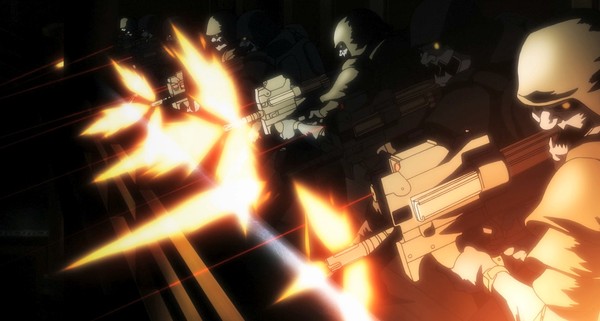 Extras
The extras included for the film are fairly consistent in their theme. A majority of them being trailers for the film itself. Included is the Japanese promotional videos and trailers for the film’s original release, along with the English trailer for the dub. Similar in form is the NoNeNoNe Theatre, a cuter look at the Blood C series. Hosted by the characters of Nono and Nene Motoe from the series, the segment explains important elements from the series, such as characters, locations and events. Also included for the sake of exposition and discussion is an Enlgish commentary track for the film. Led by the ADR Director Mike McFarland, cast and crew from the film express their own views on their characters, the story and the behind the scenes processes. 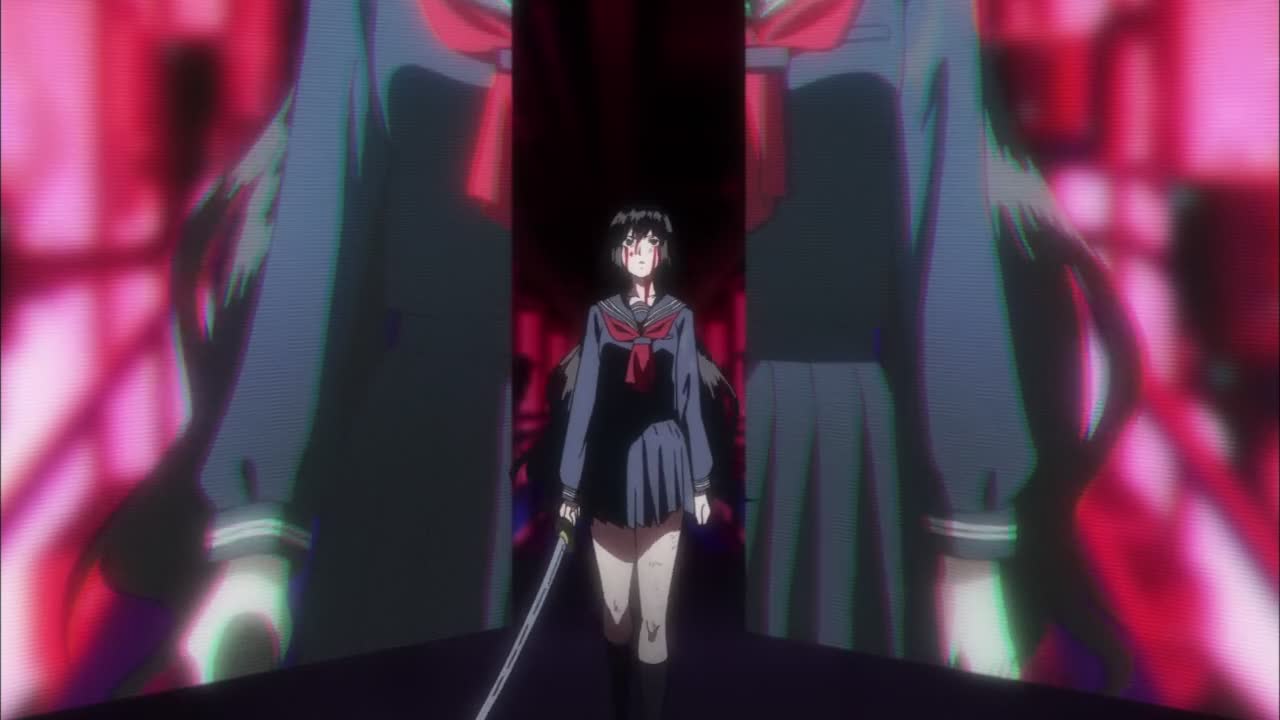 The answers are found within

Overall
Blood-C: The Last Dark is what it set out to be: a sequel to the series. A knowledge of Blood-C is required to grasp the plot, which is fairly contained and does not go out of its way to explain prior events, merely providing timely references that fans will understand. But, as the entire plot revolves around vengeance for the series, it’s to be expected The film itself is also a lot darker than the series was. Removed of her cheerful side, Saya is a much darker character, consumed by her desire for revenge. In turn, the film does not cut between light and dark elements as the series did, focusing solely on the evil of the Elder Bairn and Fumito. That being said, the overall tone of the film serves as an honest continuation of the Saya story and the evolution of her character. All in all, the film builds on the foundation of Blood-C, and much of its impact is drawn from previous material. Although the visuals stand alone in their own unique and twisted way.