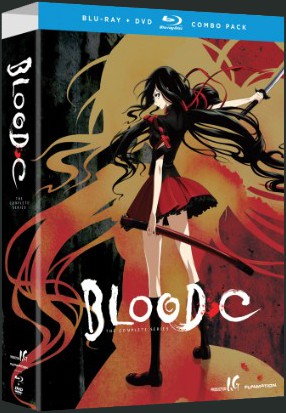 Overview:
Blood+ was a popular anime series during its run from 2005 to 2006, coming from a movie and leading to another albeit live-action movie. So, what better way to capitalize on the success of the name then to make another series, which is exactly what some might find with Blood-C, a (maybe?) sequel series to the original. Can Blood-C capture the audience like the series before it? Does it build upon the story or go in a new direction? With any luck it’s still the same old Saya we all love. 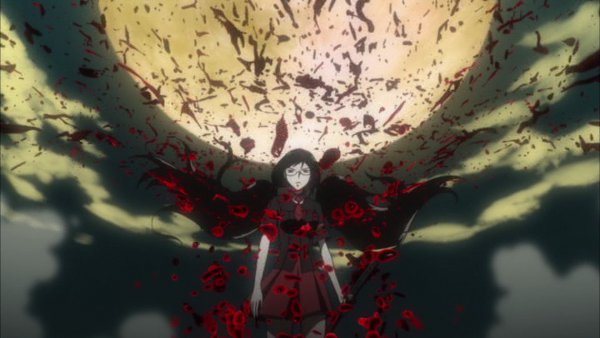 Story:
The argument of Nature vs. Nurture, being the main component of who we are as people, has been around a long time. Does who we are born as matter more than where we grow up? The story of Blood-C explores this in some ways using someone we already know, though not how we last saw her. Saya Kisaragi, a shrine maiden and high school girl, lives with her father and secretly fights Elder Bairns with the aid of the Sacred Blade whenever they appear to protect the town. Those well acquainted with the Blood series will notice that none of these things have anything to do with the Saya from Blood+. So, what’s going on here? Is this some awful trick, a bait-and-switch?

The Saya of this series is a clumsy girl that seems to truly enjoy life, singing songs as she walks to and from school and obviously catching the eye of several boys. This series starts out about as cliche as a school anime series can get with the saving grace of the Elder Bairns that Saya fights, which provide some really great battles against unique monsters. The other characters fit into the cliche shtick of straight man female friend, overly cute female friends, modest love interest, and the bad boy. All these together create a surreal feeling to the anime and may make some question where it is headed as a story. It also goes on to show off just how bad Saya is at saving people from these creatures as practically every attempt to defend or save the civilians results in failure, though props should definitely be given to the show for not being afraid to take out main characters. 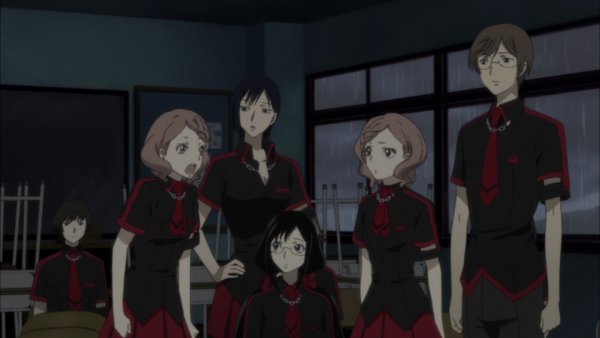 Further into the series provides a bit more information as to what is really going on in the seemingly mostly-empty town and monsters attacking it. Without giving too much away, astute viewers should be able to pick up on the fact that not everything is as it seems and becomes a game trying to piece what is really going on together. While those that haven’t seen the previous series shouldn’t have any problem with the structure of the story, those that have may become distracted by this change in character. Have no fear though, as at the wrap of the story it will make some sense as to how it relates. Though unfortunately the ending of the series itself ultimately ends with a lead into the follow up movie, so it lacks a truly satisfying closure, but that does mean more time with a really messed up main villain, just not here.

Visuals:
The series boasts some great animation, with detailed characters and backgrounds that always look fresh. Judging from the commentary the series originally featured some heavy censorship for all the gore and violence, which is completely uncensored with this release. Those liking excessive gore should be sure to check this out, as the monsters take out people left and right, devouring them and leaving only chunks behind. The final battle features one of the most blatant disregard for the random people around as the monsters have a field day in the streets. 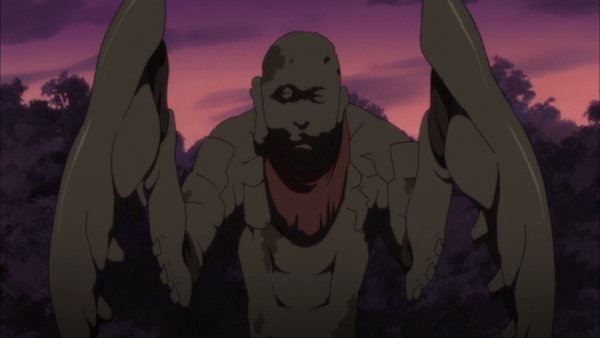 In addition to the ultra-violence, the monsters that Saya faces are all very interesting and unique. No two monsters look or even act alike, well other than monsters that are the same by design. From a stone statue, to a plant, to a wide variety of creatures even each battle plays out fairly differently. After really only seeing Saya fight Chiropteran in Blood+, it’s great to see it change up a lot more this time around.

Audio:
The voice acting of Blood-C is well done, especially dealing with the duality of some of the characters later in the show. Comparing the original Japanese to the English dub is difficult as they were both fairly equal in quality to each other, and even trying to compare Saya’s walking songs between the versions is tough as both voice actresses do a great job with the silly, overly happy tune. So, however one decides to view the series shouldn’t effect any opinions of the overall quality there. 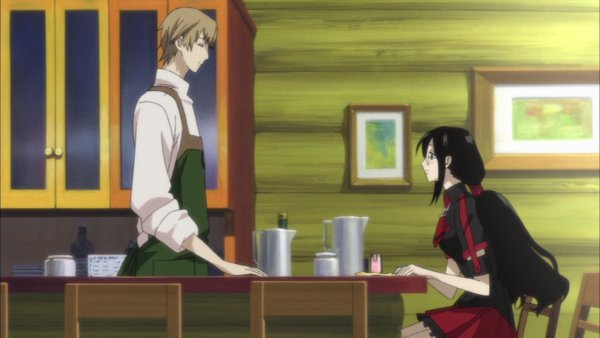 The music in the series does a good job both conveying the somewhat weird nature of the show, with strings accompaniment to the more mysterious sections and even the the more happy go lucky do a good job of filling that vibe. Though in terms of music one of the best parts is the score across the ending of the last episode, not the ending theme, but last moments of the actual show. Though on the subject of themes it is important to point out that the opening theme for the show is “Spiral” by Dustz, which follows the shows themes of aspects of past and not knowing who you are, as well as the use of French in addition with the Japanese and English makes for a fairly unique song for an anime. The ending theme on the other hand is “Junketsu Paradox” by Nana Mizuki, who also plays Saya in the series, deals with the theme of losing oneself.

Extras:
The extras on this release includes commentaries, commericials and promo videos, text-free opening and closing themes, and trailers. Though not really an extra, it is important to point out that there is no option to turn subtitles on or off, only a language selection between English and Japanese, with subtitles automatically playing for Japanese. No love for English hearing impaired this time? The commentaries are for the 6th and 12th episodes, however as they clearly state in the commentary it’s a good idea to have seen the entire series before listening to either. The commentaries themselves cover things from what it was like first time directing a series for English Dub and impressions of the different characters, as well as the amount of deaths that seemed to occur through the series and their process of getting even the briefest VOs for them. 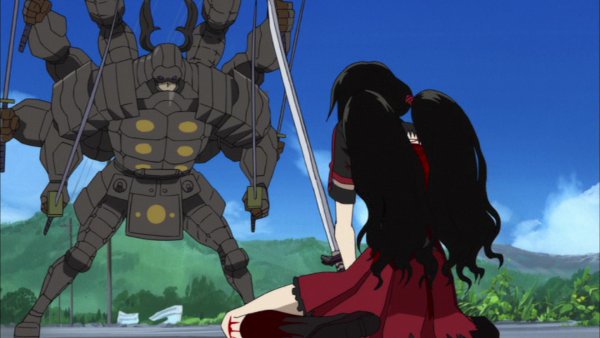 Interested viewers can check out the original Japanese commercials and promo videos and/or the U.S. trailer for FUNimation’s release. Outside the trailers for other upcoming and already released series licensed by FUNimation, the only thing really left over is the text-free themes, which there are actually 3. While only the one opening, there are in fact 2 ending themes, and while they have the same song the visuals are vastly different as the Episode 12 ending theme features the badass Saya that fans probably missed throughout the majority of the series.

Overall:
Blood-C is an interesting beast, gory and fun when it gets to there, where the only thing holding it back is the longer drawn out beginning. In some ways this entire series could have worked with any other katana wielding girl in a high school uniform, similar to looking at how they slapped Mario onto other game to make Super Mario Bros. 2 in America. Without an actual ending it is difficult to say if it’s a worthwhile addition to the Blood series as a whole, or just an interesting oneshot, which is disheartening as the monsters and villain are pretty great. If only they had had more time with the real Saya to have a deeper meaning. On the high side however, the show isn’t afraid of gore and anyone coming for that isn’t going to be disappointed.