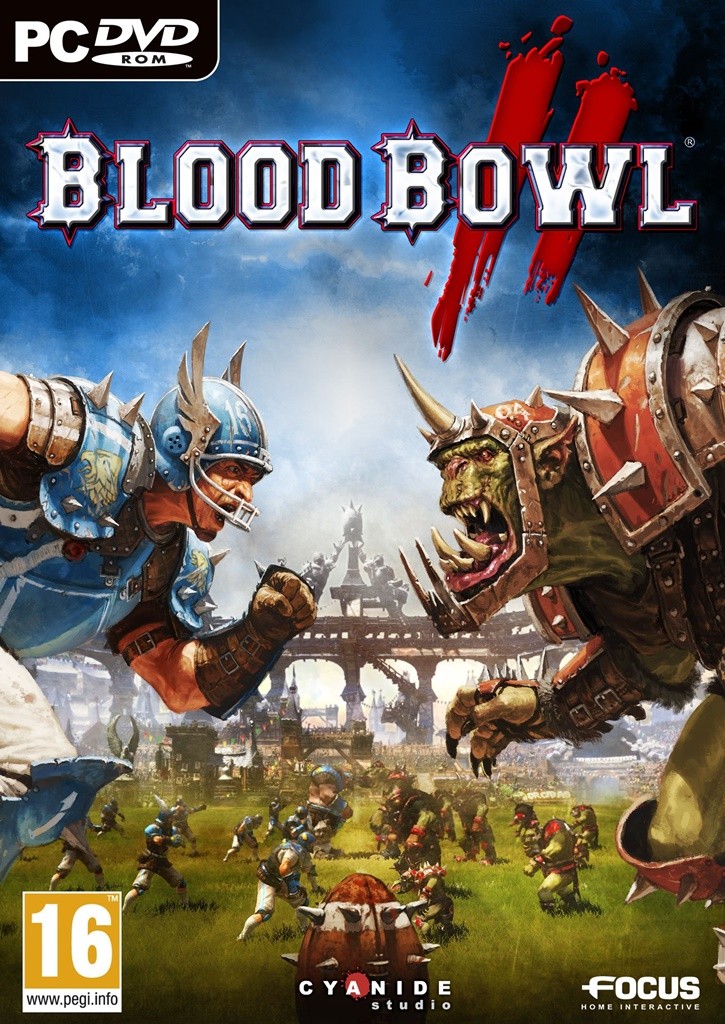 Blood Bowl 2 is the latest incarnation of the long running Blood Bowl board game from Games Workshop. The game is a parody of American Football, pitting teams composed of famous races from the Warhammer Fantasy universe in a hyper violent fight on the gridiron. The sequel introduces a new engine, persistent online modes, the Bretonnian race, and a brand new campaign mode. 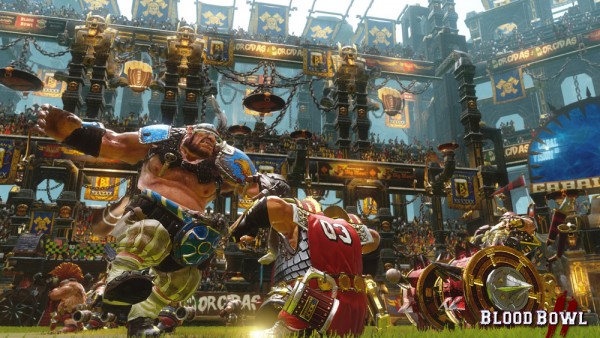 The campaign mode serves as the game’s main plot. The player takes control of the Reikland Reavers, a human team that was once the dominant force. Since then, the team is barely a shadow of its former glory and is at risk of disappearing forever. Gamers are tasked with rebuilding the team from scratch. The story serves as an enjoyable parody to the standard sports movie plot. I think the real star of Blood Bowl 2 is the flawless colour commentary provided by vampire Jim Johnson and ogre Bob Bifford. The writing is a dead on impression of standard American sports commentators, complete with Bob’s nostalgia for his old playing days. Jim and Bob serve as perfect foils for each other and their commentary is packed with pop culture references that are absolutely hilarious.

The first Blood Bowl board game was released by Games Workshop in 1986. The game and the rulebooks has been updated over the years, with some fan made changes here or there. Cyanide Studios first picked up the IP in 2009 after making a real-time game called Chaos League, a game the courts ruled was a little too much like Blood Bowl. Cyanide Studio’s first outing with Blood Bowl had both a Chaos League like real time mode and a more traditional turn based mode. Blood Bowl 2 serves as a bit of a shakeup for the series, as it dispenses with the real-time mode completely. I think it’s a good choice, as it puts greater focus on the core gameplay taken from the board games. 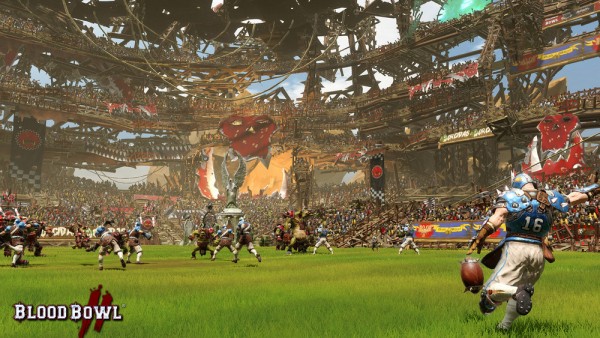 Blood Bowl 2 replaces the old career mode with a new story campaign that also doubles as a tutorial for the new players. The first couple matches are simplified by varying degrees, letting players perfect one basic part of the game before adding another element. It is an excellent, although extended, tutorial that may drag on a bit too long for experienced Blood Bowl players. The campaign matches have a scripted element to them that have in-game events based on the plot. They are a nice change from the normal modes.

The main event so to speak is Blood Bowl 2’s league modes. These are highly customizable events that can be played alone against A.I. teams and online against human ones. The league creator has quite a few options to tweak, allowing for the creation of short sudden death tournaments to complicated multi-phase leagues. To start, players need to form their own team by assembling enough players from the Player Marketplace, signing a sponsor, and customizing their team’s uniforms, race, and stadium. As money begins rolling in from matches, players are able to replace seriously injured/dead characters, upgrade their stadium, and purchase boosts. 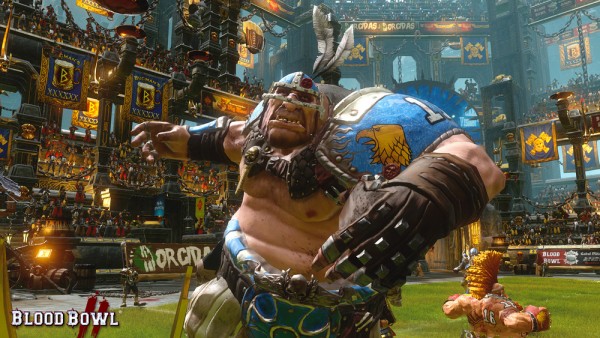 The meat and potatoes of Blood Bowl 2’s gameplay feels true to its source material. Painted figurines and a playing board is replaced with digital representations of players and fields, but the game still runs on stats and dice rolls. Each player fields a team of 11 players composed of some combination of Linesmen who will do the majority of blocking, Runners/Catchers for scoring, the self-explanatory Throwers, Blitzers who specialize in targeting ball carriers, and special Racial units. Matches are composed of two halves of eight turns each. In traditional American football style, the team that moves first is decided with a coin toss. To score a point, a team must run a player carrying the ball to the opponent’s end zone. To reach the end zone successfully, players will need to use a combination blocking maneuvers to either push opponents out of the way or knock them to the ground while driving the ball to the end zones on foot or with throws. A fumbled ball or an interception can quickly turn the game around, with the attacking team suddenly on the defense. With the many unit types and a wide variety of races to suit plenty of tactics, Blood Bowl 2 is very much a bloodier and more violent version of chess. It is reasonably easy to pick up, but mastery takes quite a bit of brains.

One of the more pleasant surprises of Blood Bowl 2 was the inclusion of Cabalvision HD. This feature allows players to watch replays of their old matches and live matches currently being played around the world. It’s a great way to spectate other players to learn some new strategies. 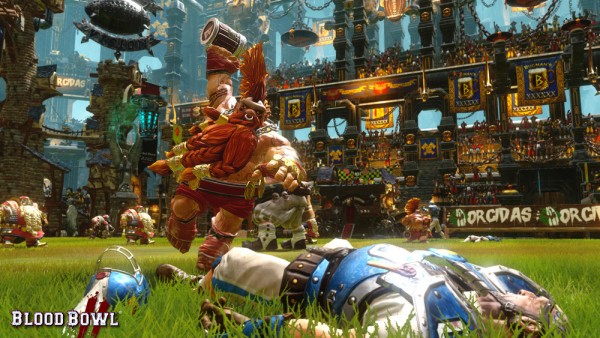 While Blood Bowl 2 is a solid game, there are some issues. There are some parts of the game where things get painfully repetitive for a variety of reasons. While the game is quite excited to show off the brand new engine with plenty of cinematics, things can get pretty boring and time consuming after a while. There are a variety of pre-set options that cut down on the number or disable cut scenes completely, but I would have preferred more granular control that allowed me to enable or disable individual cut scene types. Playing against the A.I. can be a bit of a drag as there is no way to quickly skip through the A.I.’s turns. Instead, the player is stuck waiting on each turn as if they were playing against a real human.

On the gameplay side, Blood Bowl 2 is not going to create many new turn based strategy fans. At the end of the day, there isn’t much variation to Blood Bowl 2 due to the nature of being an adaptation of a board game. While the same could be said about any sports game, Blood Bowl 2 lacks the extra game modes that long running sports game franchises have tapped into to add more variety in their games. 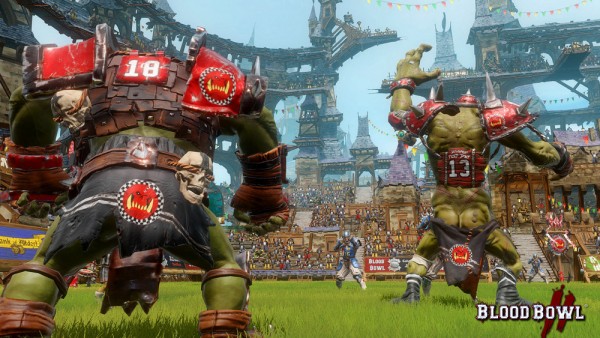 Blood Bowl 2 does suffer from a lack of polish right out of the gate. There are some odd bugs and glitches that seem to pop up rather consistently. For the most part, they are benign and can be worked around, such as movement options suddenly disappearing for a player for a few clicks. On the other hand, the single player game’s lack of a checkpoint or quick save option is rather frustrating for those suffering from less benign bugs. The only way to save progress during the campaign mode is to save and quit the game on your turn. Solo tournament play doesn’t have any save states at all, causing an unlucky crash can nuke an entire match worth of effort.

One of Blood Bowl 2’s big selling points was the brand new graphical engine. It is a very nice step up from the original Blood Bowl. The detail level has been increased significantly, as even the fans are individually rendered in the stands. The game does need more variation in its cut scenes, as the same one is often played over and over.

On the technical side for PC gamers, Blood Bowl 2 is rather sparse on the video options. Surprisingly, there is no support for true full screen mode and getting to windowed mode is vague. The visual options are pretty basic, with quality options ranging from “very low” to “very high” and the ability to disable grass and spectators. 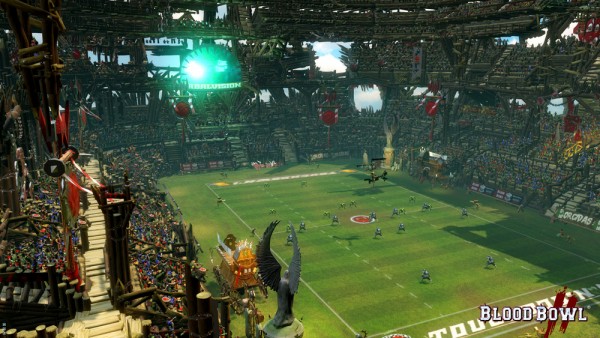 Blood Bowl 2 delivers an excellent audio experience. The sound effects are solid, with plenty of bone crushing sound effects to reflect the game’s violent nature. The soundtrack is pretty standard for a fantasy title. What pushes the game’s audio to excellence is the fantastic voice acting from the colour commentators Jim and Bob. The voice actors manage to replicate American sports commentary perfectly, while giving it a unique fantasy twist. 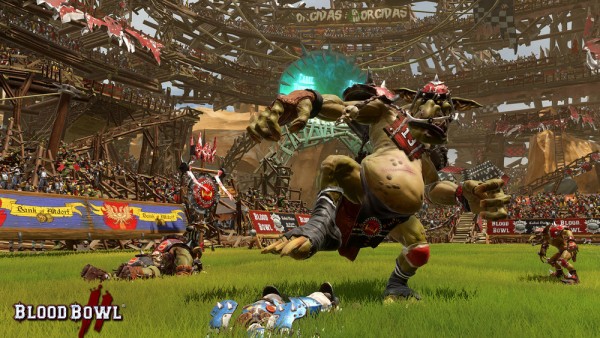 Blood Bowl 2 is an excellent sequel to the 2009 game. Cyanide Studios have made the right choices in focusing on the game’s board game roots. It’s a rewarding challenge that is easy to learn, but difficult to master. The shiny new coat of paint from the new graphic engine and Cabalvision HD’s colour commentary is much appreciated. On the other hand, Blood Bowl 2’s isn’t going to suddenly convert people not already interested in the genre as the game is just inherently repetitive and lacks polish.