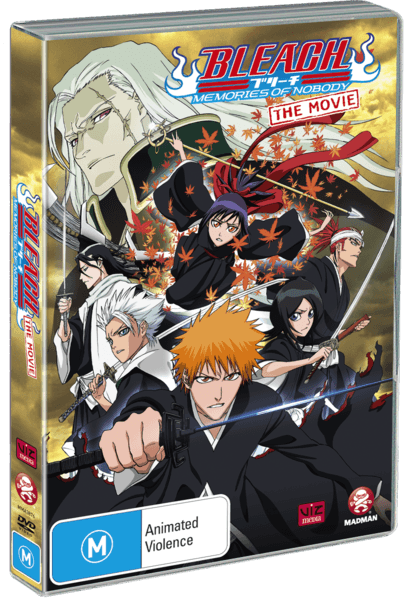 Overview:
That’s right folks, the fate of two worlds is on the line again, as often is the case in stories involving two worlds. But this is the first true time for Bleach that the fate of both the Human world and the Soul Society have been simultaneously threatened with destruction (oh no! Won’t somebody please think of the children!) .

Bleach is a series of little subtlety and in it’s first silver screen outing, let’s just say I had prepared for the worst, with memories of other shonen anime movie adaptations slowly but surely becoming a tumour on my cerebellum (why can’t I forget Naruto: Ninja Clash in the Land of Snow!?). But hey, I went in with low expectations and was pleasantly surprised to see that it in fact; didn’t suck. 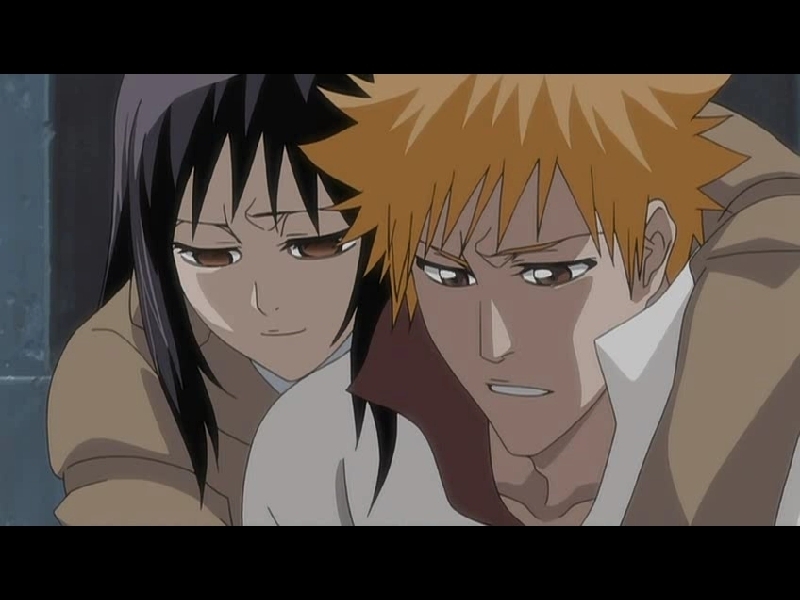 Bleach the Movie: Memories of Nobody is a rather sound first feature length outing for Ichigo Kurosaki and friends. With a concise plot that would put some story arcs from the series to shame and some battles on par with the best fights of the series, the movie was a pleasant surprise. But is it without it’s pitfalls?

Story:
The movie should be treated as a side-story as it does not particularly have a canonical fit into the anime or manga. But, if you are going to watch it, the perfect time would probably be right after the Soul Society arc. Though, it could essentially be watched at any time, it does have the problem of relying on the viewers knowledge of Bleach as it doesn’t reintroduce characters for the new viewers. It simply tells a story aimed towards people in the know with Bleach. Just a word of advice to those who haven’t watched anything to do with Bleach, this series has several truck-loads of characters and most of them appear in this movie.  Sadly, most of them play little role in the actual story and instead just play part in a battle or two or watch on helplessly whilst shouting out Ichigo’s name.

But, as to the nature of the story, it details the appearance of a mysterious girl named Senna who appears to be a Soul Reaper, but she is generally just a very confused girl who needs Ichigo’s help. Long story short, a league of villains appear revealing a plot to destroy the human world and the soul society and as you’d expect, the Captains and Ichigo defeat them all and save the day. This is a cause of irritation and definitely a pitfall of the film, though it is later redeemed by the time the credits roll. 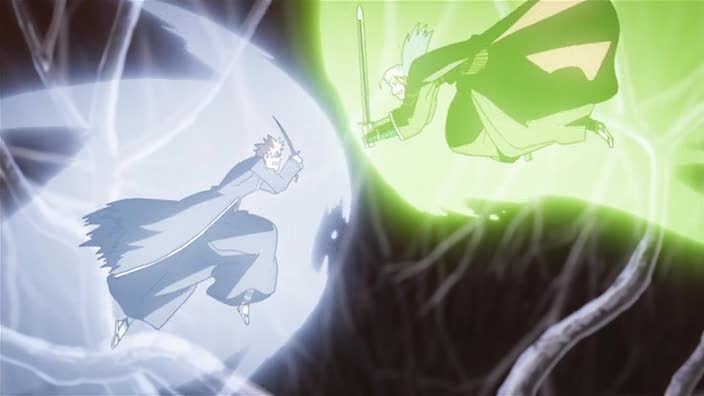 Thankfully there is more heart underneath all this predictability and even a little unexpectedly bitter sweet. The film has a warmth to it that is not as easily found in the series, which tends to shoot more for badass bravado. The gooey center of this warmth is Senna, the mysterious girl, but to say any more would spoil things (lets just say the title is a hint of what to expect). The film left me feeling both melancholy and happiness, something I never thought anything Bleach related was capable of. Perhaps it’s because Kubo had nothing to do with writing it.

Artwork:
As you’d expect from a film’s budget, the artwork and animation is of a much higher quality then it’s source material could be, and rightly so. With bright visuals, crisp character designs and a vivid scenery; it provides a stark contrast to the series and even more so to the manga (famous for minimal backgrounds). It certainly creates the big screen feel that other anime movies fail to achieve. The fight scenes are animated spectacularly and the characters move more gracefully than ever before,  it all makes this film feel large (that’s a good thing trust me). 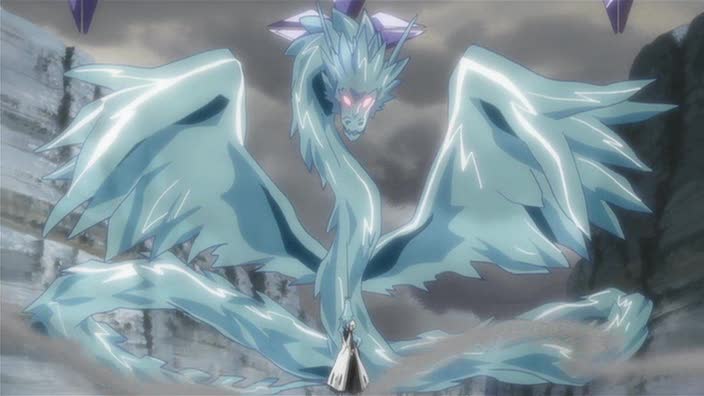 There isn’t much to say really, the visuals were very impressive and made everything feel so much bigger than in the series. In film adaptations of anime, if they can achieve this, they at least got something right.

Audio:
I have to say, I love the soundtrack of the Bleach series and thank god they kept some pieces for the film. To me personally it would not have felt like Bleach without the classic “if you want to see some action..” roaring over the battles like rolling thunder. It is both my favourite musical piece of the series and also of the film.

Though I have to give kudos (no not Kubos!) to the film’s original pieces such as the theme for Senna which was beautifully used when she parts ways with Ichigo and in her past revelations scene.

Characters:
Ah the biggest and most glaringly obvious pitfall of them all, the characters. Not that there is anything particularly or fundamentally wrong with them (mostly), it’s just that there is far too many of them. Surely not all of them needed to be in the film. I mean come on, side lining some of the most developed characters in place of under-developed ones such as most of the captains and introducing villains and then not bothering to expand on them at all? 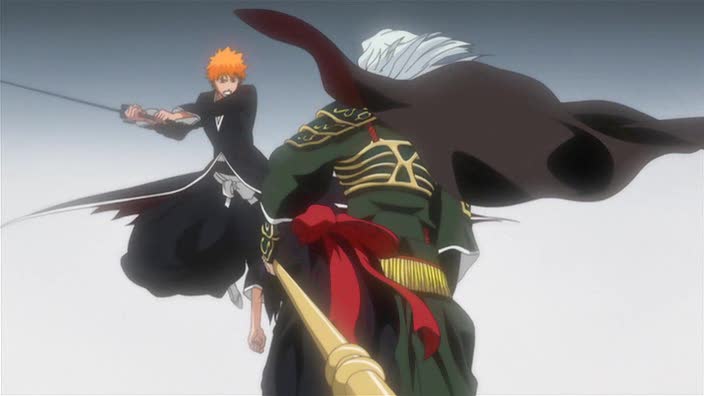 I know this is more of Tite Kubo’s fault for introducing so many characters in the manga (and thus the anime), but surely it wasn’t necessary to include so many of them. Especially when the majority served little to no purpose beyond killing the baddies in the end.

Fortunately there was one saving grace in this department, the introduction of Senna (and unfortunately farewell as she isn’t a canon character). She is expanded upon so greatly that you would think that she was actually a character in the series. Her story is more heartfelt and painful than any other characters, besides Ichigo of course (the hero must always be the most emotionally wounded, just letting you know).

Her entire character, in tandem with Ichigo, is what holds the movie together and is what actually makes the movie, you know… good. For me personally, seeing her journey was the true story of this movie, I was more concerned with whether she survives, rather than whether the two worlds are destroyed – which says something. 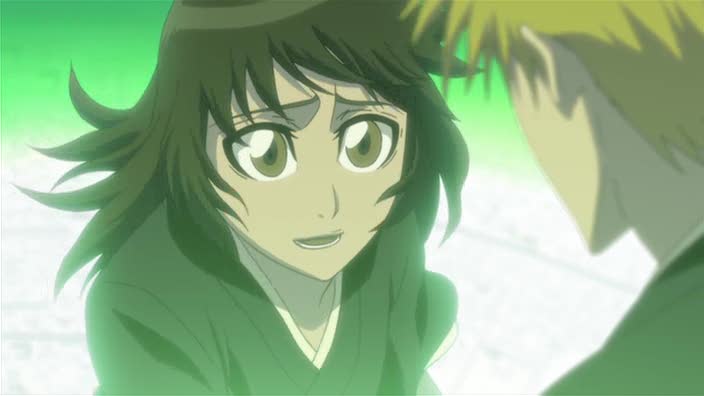 Special Features:
Madman has really done a great job with this release, which includes a special movie booklet which features character bios and information on the film and we also are given a reversible DVD cover (which isn’t half bad). The discs special features section includes an inside look at Viz Media’s work on the dubbing of Bleach the series and particularly this movie. We also get some interviews with the japanese creators (no Kubo trolling unfortunately), some trailers and the good old line art that Viz loves to put in the majority of their releases.

This movie certainly surprised me, I didn’t expect it to be this good, that’s not to say there wasn’t the expected down-sides. But overall it was a great film that puts a lot of it’s source material to shame. And isn’t that what a film based on a series is supposed to do? It is supposed to be bigger than the series and justify itself being a film. Fortunately Bleach the Movie: Memories of Nobody does all this and more. 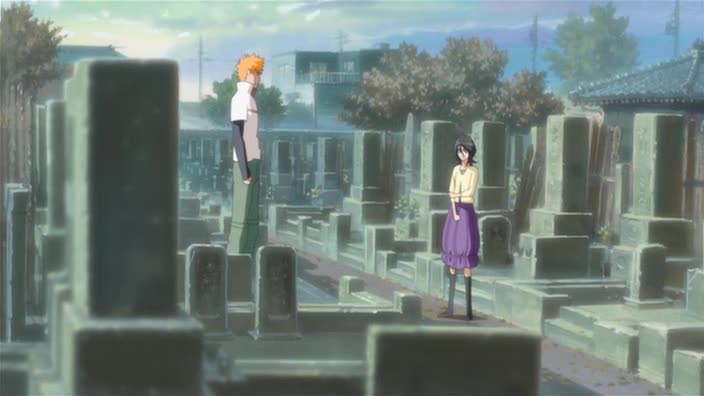 I give Bleach the Movie: Memories of Nobody: