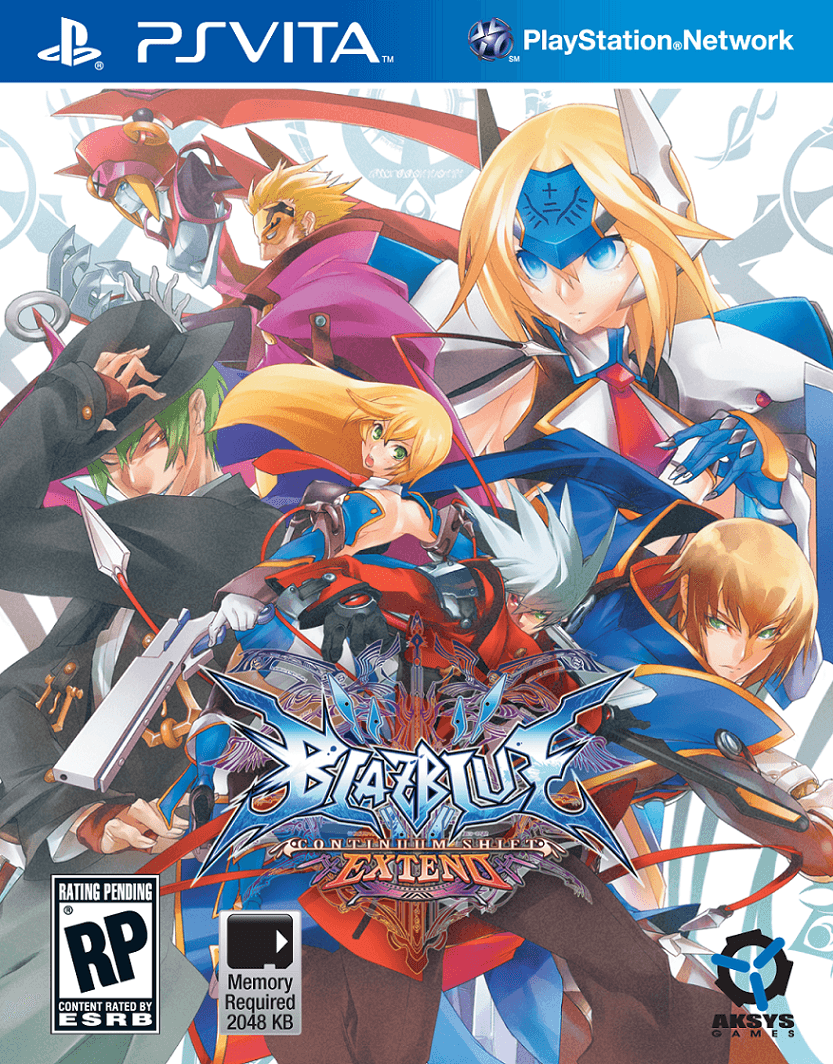 Overview:
While many series in the fighting genre can go years without seeing more than two titles released. However there are a few series that have popped up again and again with not only more content each time but plenty of adjustments and balancing to create the best experience possible for fans of the series. Such is the case with BlazBlue: Continuum Shift Extend which is a sequel to BlazBlue: Calamity Trigger at heart, as well as the twice expanded version of the original Continnum Shift. However this time around it has been brought to the new portable gaming powerhouse from Sony, the PlayStation Vita. Has the series shifted flawlessly to the new Vita or have there been some bumps along the way? 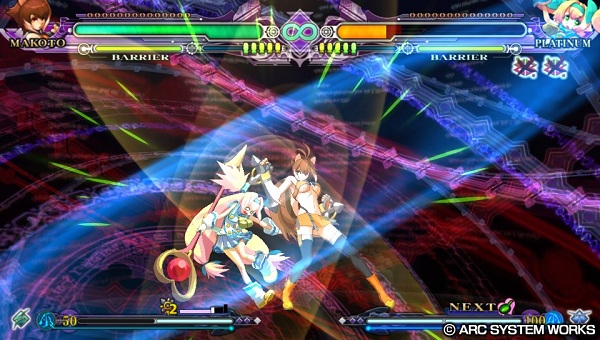 The presentation of the story for BlazBlue: Continuum Shift Extend remains unchanged, following a visual novel style presentation where the characters present and talking are provided with partially animated characters that talk to one another. Each character has their own separate storylines, with some locked until the player finishes certain character’s storylines first. However finishing a story may not be quite so easy, as there are various branching paths and choices for each character with a wrong choice leading to an alternate ending.

One of the biggest inclusions to the already impressive in length Story Mode is the fact that all of the characters which have been added into the game: Makoto Nanaya, Valkenhayn R. Hellsing, Platinum the Trinity and the brand new Relius Clover have a story mode of their very own, which not only provides further backstory for their characters but more presentation for other characters as well as they interact with the newly added cast of characters.

Another brand new addition is actually a bit of old content that should please those who have never played the first BlazBlue title, Calamity Trigger. Included with Extend is a re-mastered version of the Calamity Trigger storyline where players are presented the canon only storyline that contains all of the important events that occurred in the first game, making sure that no one is left in the dark. 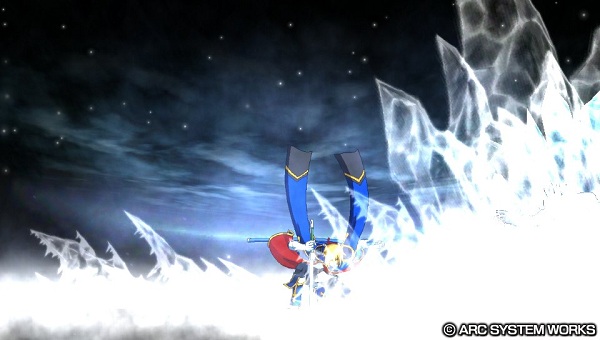 And believe me; it is quite possible to be left in the dark with BlazBlue’s storyline. Under the best conditions, BlazBlue: Continuum Shift Extend’s storyline can be very convoluted and confusing, especially when certain characters have endings that are very different from one another. However it is thanks to the amazing presentation, in-depth story telling that, although confusing, still presents an entertaining journey and the extremely likable and expansive cast of characters that the game’s storyline is more than worth the price of entry.

Visuals:
While past versions of the BlazBlue series on portables have taken an impact as far as the quality of the graphics are concerned, none of those devices contain the capability of the PlayStation Vita. After playing multiple versions of BlazBlue over the years, it comes as a huge surprise that the Vita’s OLED screen presents some of the best possible graphics you could ever ask for.

The quality of the visuals presented at any given time are absolutely amazing and are easily on par with what can be found on the console versions of the same game. This is demonstrated perfectly when the opening animation plays and you are treated to a glorious animation featuring all of the characters present in the game itself. However the quality doesn’t stop there. 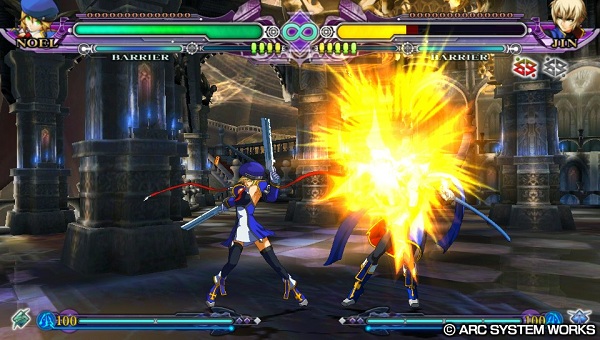 One thing that has always been pleasant about the BlazBlue series is how alive each stage felt as you battled on it, with something always moving in some backgrounds or just a high level of quality others. There is also absolutely no slowdown despite how hectic a battle can get at any given time and the high quality representations of the characters in battle. It is worth noting that nearly all of the returning characters still have the same experience and color options, though a few extra color options can be unlocked in the game’s Gallery Mode.

Audio:
As with past versions of BlazBlue, BlazBlue: Continuum Shift Extend has an extensive story mode with hours of content, and every element of this story is given fully voiced dialogue with voice actors returning to reprise their once again, with newer characters finally given extended dialogues with their own storylines that have been added into the game. The voice actors provide a great job with their characters, and those who would rather hear the Japanese voice actors will be glad to hear that the entire game can also be played with the Japanese voice actors as well.

Besides the voice work for each character, the game still retains most of the same music which we have heard before from past BlazBlue games, which is great for fans but does feel a bit too recycled at this point in time. However the opening song that accompanies the opening animation is absolutely wonderful and something actually worth listening to each time the game begins.

Gameplay:
At its heart, BlazBlue: Continuum Shift Extend is a very fast paced 2D fighting game. However beyond that lies a very in-depth and complicated controls system that can thankfully be dumbed down a bit for more accessible play. Now while other fighting games can be picked up and players can learn to play each fighter rather simply, BlazBlue offers a much different experience. First of which involves the large amount of characters included for this version of BlazBlue, with a total of 19 characters overall, the most that has ever been available for the series. 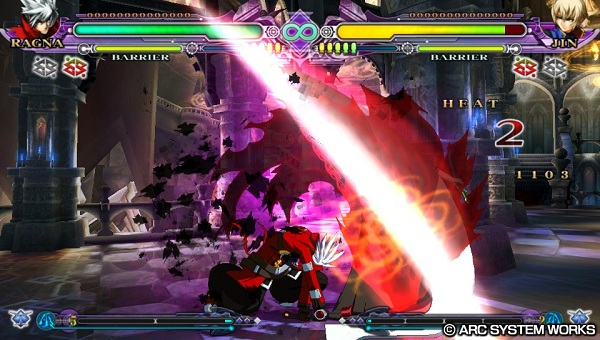 It is highly recommended that new players spend time trying out the tutorial, practice and challenge modes as these modes are the best way to hone your skills and take a chance at learning all of the characters different abilities or finding the character you like the best. The level of difficulty is compounded further by the fact that each character has special Drive attacks which are only used for that character alone, providing a new experience for each character on the roster.  Finally, the game also contains very extensive combo attacks that can be very difficult to pull off for the untrained.

However there is a way to avoid this complicated control scheme and that is through the thankfully included Stylish mode, which will make performing special attacks, combos and even the devastating Distortion Drives can be performed without too much effort. Now while this does make things easier for new players, it also limits them to only a few specific attacks and doesn’t unlock the full potential for the character, providing a good balance between veterans and new players. 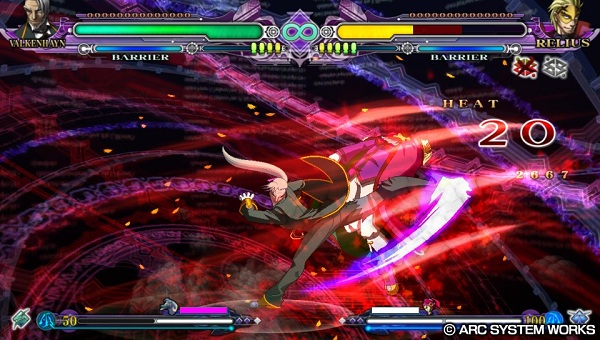 One of the most noticeable things about BlazBlue: Continuum Shift Extend when you start it up is the sheer amount of content that you are provided with upon start up. Now most of the modes included are those that have been included with past versions of the game, such as Story Mode, Score Attack Mode, Arcade Mode, Challenge Mode, and Abyss Mode, however there  is a brand new mode as well, which will give you a great challenge. This mode is called Unlimited Mars mode and will put your skills to the test and your Vita’s durability for anger as you face off against extremely strong and smart AI opponents ready to beat you down for even entering such a mode.

Besides the wealth of single player modes available, BlazBlue: Continuum Shift Extend on the PlayStation not only offers ad-hoc play for facing off against friends locally in lag-free combat but also an online versus mode as well. Players should find this mode well populated with plenty of other players to face off against in a nearly lag-free battle that will extend this game’s longevity far past anything the single player modes could provide.

Now you may notice that there has been little to no mention of the PlayStation Vita’s special capabilities during this review, and that is due to the fact that there are barely any for this title. Players can use the touchscreen to view artwork and images in the Gallery Mode easier, however the main use of the Vita’s capabilities come from the option to use the rear touch pad as an extended controller. 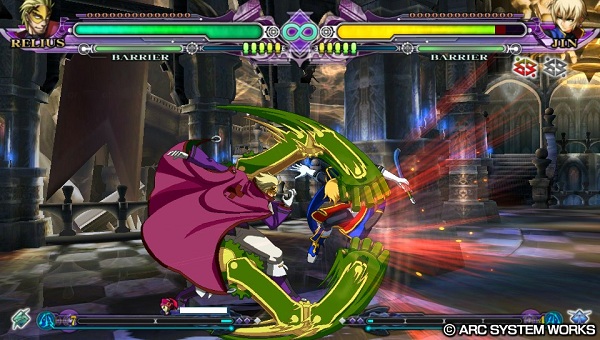 If the player wishes, they can activate the rear touch pad of the Vita and map certain buttons to each section of the Vita’s touch pad. However this is a far from accurate gameplay choice as using the rear touch pad can be extremely inaccurate, especially in a game as fast paced as BlazBlue. Plus it is extremely easy to simply activate an unwanted attack simply by brushing one of the spots on the back of the Vita on accident, something likely to happen on more than one occasion.