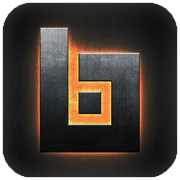 BlastPoints is a space-warfare dog-fight shooter for iOS and Android, made by Australian indie developer Pub Games, and funded by Film Victoria. Promising over half a million customisation combinations for your ship, and 9 different play types, BlastPoints sounds as deep as space is vast. So, will BlastPoints blow (blast?) you away or leave you stranded in the far reaches of space, where no one can hear you scream of frustrations? Read on to find out.

To control your ship in Blastpoints, you must use a virtual joystick on the bottom left of the screen. In the options sub-menu – which can be accessed in-game after pressing the pause button at the top right – you are able to lock the joystick at it’s default position or enable it to manifest wherever you touch on screen, as long as it’s within that bottom left quadrant. I chose to “unpin” the joystick, but every now and then when I would press and hold or just move left/right, my ship would do a barrel roll or 180 flip. This was completely unintentional. There is a brief playable tutorial that gives you the basics, but it never mentioned these manoeuvres. I eventually found that swiping in the appropriate direction from the middle of the screen would initiate these moves, so I got quite annoyed when they would inexplicably occur when I was using the joystick. There were also moments when the joystick wouldn’t move to the position of my finger and was stuck even without the locked setting on. 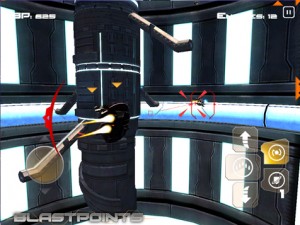 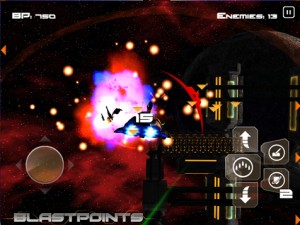 The weapons and boost/brake buttons are in the bottom right quadrant of the screen. Outside of the inadvertent usage of a special or secondary weapon, everything works just fine. There are 5 environments and 9 different game types – although a few of them are just rehashed, souped-up versions of others. The main ones are: Deathmatch, Time Attack, Survival, Waves and Assassination. Now, at any given point, four matches are available, which is potentially discouraging if you’re in the mood for a game type that is not listed at the time. As you beat each one, a new one will take it’s place…which one that is, however, is seemingly random. They all have a certain difficulty level attached to them, ranging from easy to medium to hard. There are special challenges that appear (reference “souped-up” versions) that may be tougher, but allow you the opportunity to attain more BPs than usual.

The five environments are called Squid, Pipe, Refinery, Gyroscope and Cage (basic, right?). Each map has an invisible barrier that the playable will be warned to turn back from once they get close enough. They each also have particular moving parts in them that will force you to dodge and time your path around them as they will do damage if you collide with them (be it a man-made structure or travelling asteroid). As enemy ships enter your shooting range, they develop a red reticule around themselves. There are multiple types of enemies that have their own unique secondary weapons, such as one that sucks your energy away. Whenever you destroy an enemy ship, they will leave behind either battlepoints or special drops. These vary from shields to extra damage bonuses. 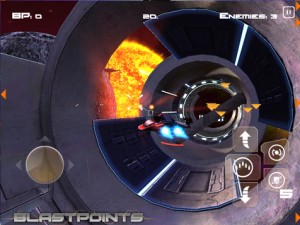 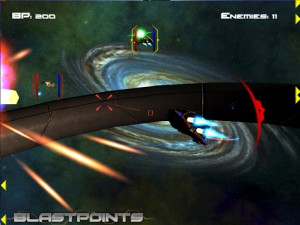 From the main menu, you can access the garage. The garage is where you can buy all sorts of upgrades using, you guessed it, battlepoints. These upgrades apply to your weaponry and ship, even allowing you to buy new ships all together. Primary weapons up for sale range from Machine Guns to Rail Guns to Burst Lasers. I actually went back to the game today and found that my Machine Guns, which I used 5,500 BPs for, had re-locked themselves. Very annoying, and hopefully not a common sight for players. Secondary weapons includes Lightning Beams, Proximity Mines and Cluster Missiles amongst others. Special abilities can also be bought, although they will run out and you will have to pay to restock them if you are particularly fond of them. Faster engines with better braking capacity can be purchased too, and if you run out of BPs, you can buy more with in-App purchases. Now, I never buy resources in a game when I can earn them by playing it instead, but I must say that certain parts/upgrades can be quite expensive and it takes too long, in my opinion, to earn the amount of BPs needed sometimes.

For a mobile platform game, BlastPoints looks fantastic. It utilises Unreal Engine 3, which can scale very well to iOS and Android, and so graphically it can provide like few other engines for these platforms. The presentation is very nice; there’s a great consistency in colour and theme across the board, and the menus are simple. An odd choice is having the images used during the very short loading screens centered in a 4:3 aspect ratio, while the overlay that says “Tap To Begin”, once the game has loaded, is not and extends beyond the borders of the image. It’s not hard to fit an image to a certain aspect ratio, so I believe it would have been a conscious decision, although I don’t know why. 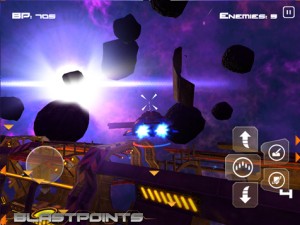 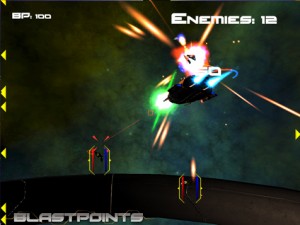 The ship models are well defined, as are the environments. Although, some are very basic, such as the ‘Cage’ level, which basically features the shell of a ship with some rubble floating throughout the area. There’s a good amount of visual differentiation between all of the weaponry, with flashes of green, blue, yellow, red and every colour in between. The same can be said for the environments themselves, with each one made to look more unique through their individual colour schemes. The screen never feels too busy, and the action reads quite well.

The music is appropriately science-fiction based, with electronic tones used throughout. And that’s just in the menus. The action tracks maintain those same qualities, with much faster, energetic beats and a larger emphasis on the pounding of drum sets. I only came across two unique tracks during actual gameplay and they didn’t seem to have designated environments, play-types or difficulties that they would play on. The sound effects include your typical phasers, “pew-pews” and such for it’s more high-tech laser/energy-based weaponry. All in all, very much in keeping with the genre and elements on screen. 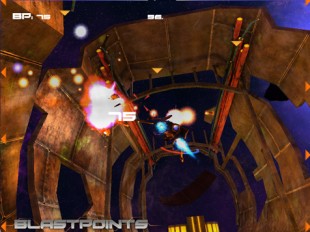 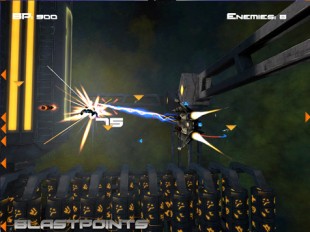 BlastPoints’ presentation is great, however issues with the controls hurt its score. One of the most frustrating, and damaging occurrences in a video game is inadvertent actions that are not at the fault of the player. They’re rage-quit inducing moments, and unfortunately, with the sensitivity of a touch screen, they were present for me in BlastPoints. Other frustrating issues like miraculously re-locked weapons and restrictions of which game-types you can play at any given point disappoint me, but it’s still a fun game. Once it gets patched re-locking will hopefully, at the very least, be fixed. Regardless, give it a shot, and maybe it’ll win earn some points with you.