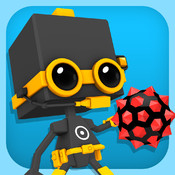 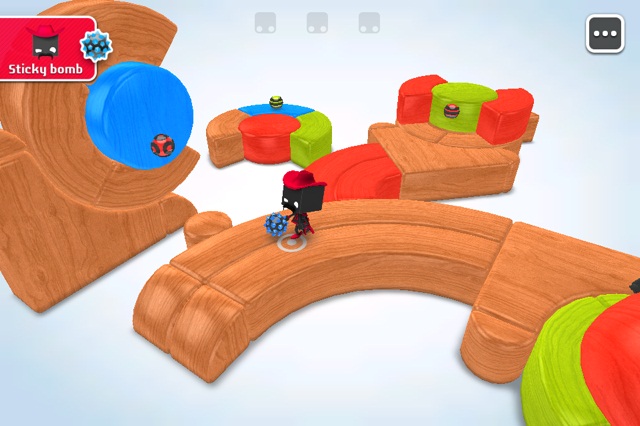 Gameplay
Players navigate little robots through brightly-coloured, tightly-designed levels, in search of “Boxies” – littler robots – on the way to the exit. Doing so involves the use of ball-shaped, colour-coded bombs, teleports, “rebuilders” and the like, while geometric shapes in the environment are coloured to indicate which balls can interact with them. Blue cube in your way? A blue bomb will take care of that. Need to get over to that red platform? Use a red teleport.

From this basic framework, clever design allows interesting puzzles to emerge. You may need to change the colour of elements, swap between two characters, or rebuild something you had to destroy earlier. Each level is presented cleanly, leaving the challenge to arise in determining the best order to undertake actions.

That said, you shouldn’t ever find yourself hopelessly unable to reach the end. Give it a few minutes of braining and old fashioned trial-and-error, and the answer will usually present itself quickly. It mightn’t entirely satisfy hardcore puzzlers, but it’s a wise feature of a game on a platform designed for short-burst sessions.

As per standard procedure, grabbing the optional collectables – in this case the Boxies – is where you can sink larger amounts of time. Sometimes you’ll net all three Boxies out of necessity on your way to the exit, while others require extra steps in the action chain. 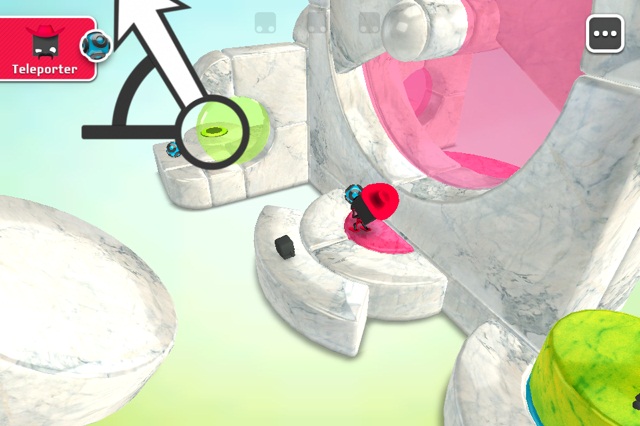 Unfortunately, navigating levels can be a problem, especially at first. Traversing the three-dimensional environments requires turning and panning the camera, and the distinction between the two is rather fiddly. Sliding your finger across the terrain will pan the camera left, right, forward or backward, while to turn you perform the same motions, holding your finger in the white void around each level.

You’ll get used to it, but it might put off some people before they reach the point of acceptance. I can’t help but feel that the game would be better suited to PC and/or consoles, via Steam, Desura, XBLA or PSN. Controlling the camera with a mouse, and the character with the keyboard seems more intuitive. Although to be fair, drawing a path for the character with your finger is very satisfying, a movement I’m surprised we don’t see more often.

Visuals & Audio
As mentioned, each level is surrounded by empty white space, which makes a clear distinction between level and void. It may sound bland, but what it loses in perceived prettiness is regained in efficiency: you’ll know instantly what you can and can’t play with, and won’t be distracted by unnecessary background dressings.

And besides, the team have obviously dedicated their visual attention to the important bits – the levels themselves. Each “world” of sixteen levels is composed of a different material: wood, metal, fabric, stone and plastic. It means little in gameplay terms, but it gives each setting its own feel. 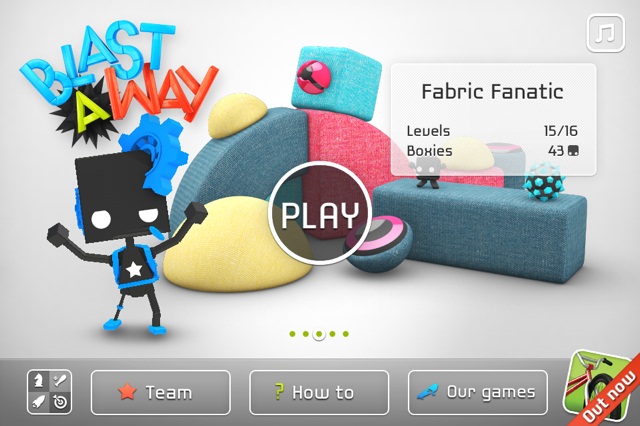 That kind of differentiation should have been given to the balls you use to get around. The pattern on them tells you if it’s an impact bomb, a sticky bomb, a sponge bomb, a teleport, etc, but the designs aren’t obvious enough. Picking them up becomes the best way to figure out what each one is, but you can’t always do that.

The environments are little more than textured building blocks, so you’d expect the characters to step in to fill the game’s personality quota. Despite being robots that wear cowboy hats, mustaches, sunglasses, or have cogs lodged in their heads, the player characters don’t contribute much. The stars of the show are those little Boxies – damn they’re cute! They’re basically just cubes with legs, but I think it’s their tiny voices that get me. calling for the player’s attention or thanking you for saving them, they remind me of the classic Worms voice.

Accompanied by a soundtrack of cheery tunes, the game is nicely presented, all up. 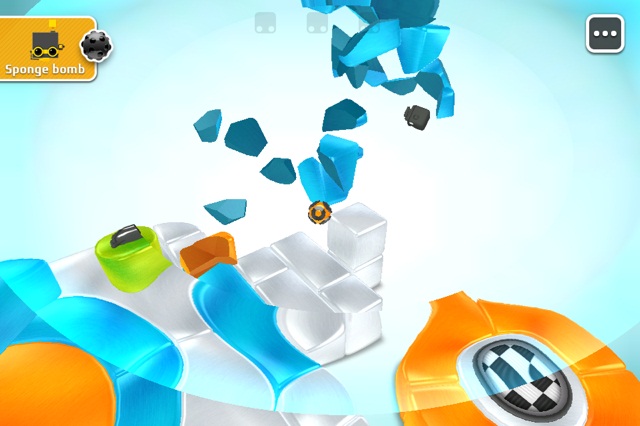 Overall
Blast A-Way followed the recipe closely, putting its own spin on things when required, but the final product tastes a little… bland. It’s technical, clever and cute, but lacks a true spark.

Were it priced as an ordinary iOS game, it would be easier to recommend, but the premium tag might make some hesitate. Again, that’s a sign of an ill fit for the iOS platform: five bucks would seem a steal for the game, were it on Steam.