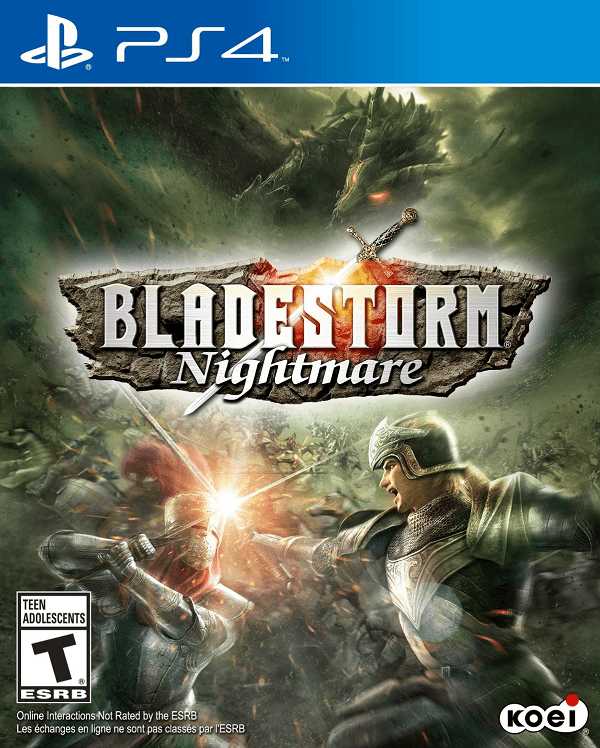 Overview
The Warriors games from Omega Force have been a yearly staple for Koei Tecmo over the years and while recent years have saw the company create various Warriors titles that tied into other franchises, many of these games still feel quite similar to one another. However all the way back in 2007 the company released a different type of game called Bladestorm: The Hundred Years’ War. Featuring a setting far different than fans were used to and a number of gameplay changes, Koei Tecmo has now re-released the title eight years later with a number of improvements under the name Bladestorm: Nightmare. The question is, have these improvements made Bladestorm: Nightmare a title worthy of purchasing?

Story
Set during The Hundred Years’ War that was waged between France and England throughout the 14th and 15th centuries, players step into the role of a player-created mercenary looking to make a name for themselves on the battlefield. Rather than fighting for glory or to try and prove that one side is correct in their thinking, you are out to make money as well as become as famous as possible and this means that your loyalty is easily bought as players will regularly be able to choose between which side they want to fight on in major battles. 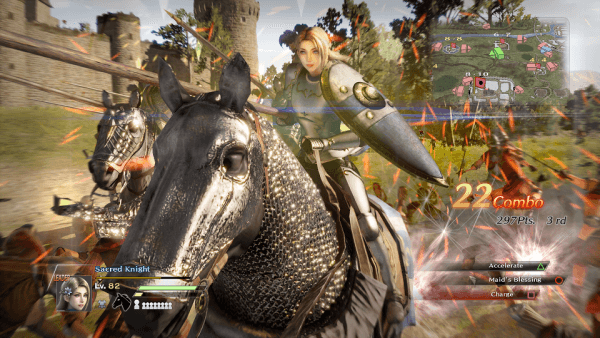 This means that one fight could see the player taking on the French while the next time around they are facing off against their previous English allies without a second thought. While most of the story is delivered through simple text briefings around the battles and in conversations held between characters in the tavern, there are CG cutscenes scattered throughout the campaign and players will see a lot of historical and original characters not only fighting against one another but interacting in these scenes.

Joan of Arc, John Talbot, and Edward the Black Prince are just a few of the historical figures that are weaved into the story and players will fight alongside them throughout the game even though most of the battles that give you an option on whom to fight for do not matter in the long run, there are pivotal skirmishes that do determine who will win the war so be prepared for that. This standard scenario is the same as the original release and is rather refreshing as it not only gives players a fresh untapped piece of history to explore but a feeling that their character actually has a chance to change things. 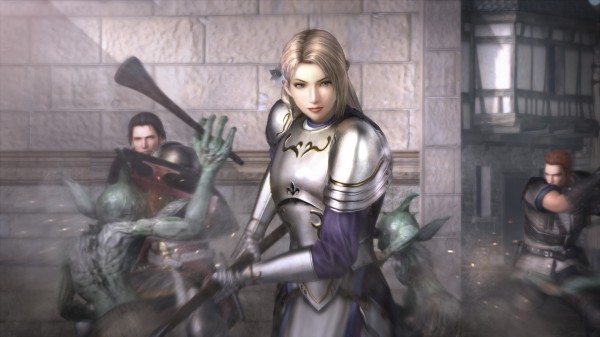 Moving away from the standard story, there is also a brand new Nightmare scenario. As the English and French are battling against one another, an army of demons appear from nowhere and begin laying waste to both armies. With creatures such as dragons, griffins, large Cyclopes, and more trying to eliminate humanity while also turning a major historical figure evil, the sides must band together to fight this new foe and players are right in the middle of it.

Unlike the more open feeling main storyline, Nightmare offers a more focused storyline that not only fleshes out the characters better but also features a number of interesting twists in what becomes a lengthy campaign to accompany the already very lengthy main storyline.

Gameplay
There is a reason that I mentioned the Warriors games at the start of this review and that is because while many fans may be entering Bladestorm: Nightmare expecting the same type of gameplay, they’ll instead be treated to something that feels like more of a combination of simple Kessen tactics mixed in with basic Warriors combat. The reason for that is that while players do have their own character to control and fight with, they are always accompanied by a small squad of soldiers that follow the basic commands the player can issue. 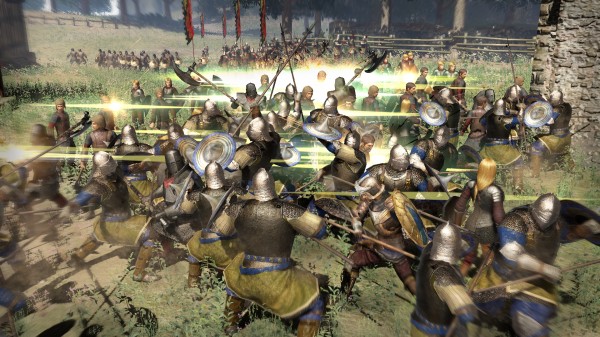 As you enter a battle players can choose what type of squad they want to initially lead, such as a squad of swordsmen, archers, cavalry, pikemen, and more (including some of the fantasy creatures from the Nightmare scenario eventually). Each of these squads comes with three commands that serve as special attacks with all three featuring cooldown times and they all follow the player’s wishes, meaning that whenever you wade into battle and start swinging they’ll be right there with you.

As you fight in the fields you will come across other squads of different types and you can change to being in command of that unit, leaving our previous one to defend the area. This allows players to change their weapons on the fly which is incredibly useful as all troop varieties have their strengths and weaknesses against other squad types. It is worth noting though that players must be trained in certain squads first in order to take command of them which requires items as well as some rather in-depth customization between fights as you adjust your player’s equipment and weaponry, train your squads and more. 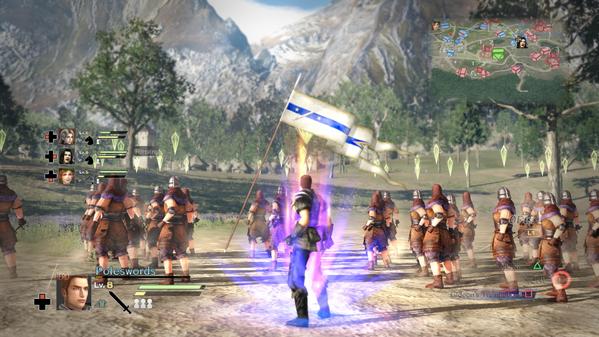 That being said, the actual combat options are quite limited as there really is very little variation to the moves players can use. Each squad features different movesets which is nice, but for the most part players will simply be holding down one button to command their soldiers to perform standard attacks at will until the enemies fall down with the only change up being the occasional use of a special attack whenever the cooldown timer finishes or triggering a ‘Bladestorm’ special attack when your morale meter is full.

This becomes an even bigger problem when you consider the massive size that many of these battlefields feature. While it does make for intense looking sequences on the battlefield as you lead a battalion of over a hundred soldiers, featuring different unit types that can eventually be combined into a large force, into battle against a base filled with enemies, the time it takes to travel between most destinations is often a simple straight jog (or ride if you happen to be a mounted squad at the time) where you’ll encounter very few enemies outside of the occasional lone squad. 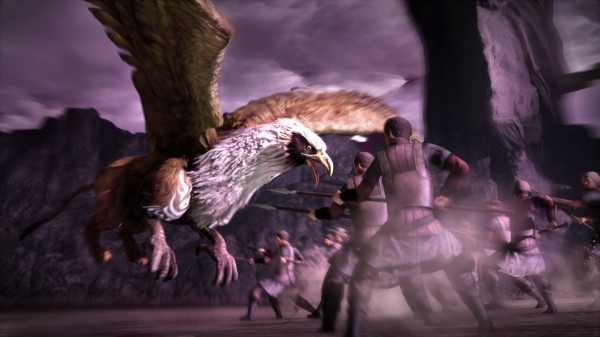 It doesn’t help that the AI is mediocre at best. The enemy AI is rather suicidal at times and almost always reacts late to any attacks you initiate, even if you are charging straight into them. Allied AI isn’t much better as it generally falls on the player to make actual changes on the battlefield but they do a somewhat decent job at least protecting areas you’ve already came through.

Visuals & Audio
Even though the base game was made over eight years ago at this point, it is easy to tell that Bladestorm: Nightmare has made quite a number of improvements to the graphics of the original game but unfortunately they still fall short in a large number of areas. There are numerous issues with textures, stiff animations, and terrible pop-in rates but I must say that the fact that there is no slowdown despite having upwards of three-hundred soldiers fighting at one time makes for an amazing visual experience, even if it doesn’t look that great up close. 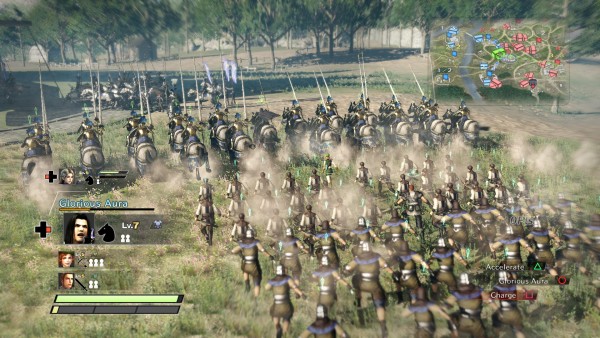 The same can be said in regards to the title’s voice work. While some characters feature fitting voice work that match the time period, there are others that sound extremely stilted, like they were phoning it in. Thankfully the actual soundtrack is fantastic as there are countless orchestral themes fitting the time period of The Hundred Years’ War and these songs are a real treat and offer a different feeling from what fans are generally used to.

Overall
Due to the limitations of the combat system and poor enemy AI often creating bland fights Bladestorm: Nightmare there is a fairly repetitive feeling to the title despite the unique ideas it introduces but those who can embrace the squad combat mechanics will be in for quite a treat as Bladestorm: Nightmare offers two very lengthy campaigns, with the newer of the two being far more engrossing and exciting, while treating players to a fresh setting and unique gameplay experience with armies battling one another on a large enough scale that players can invade enemy strongholds with an impressive army riding at their command.