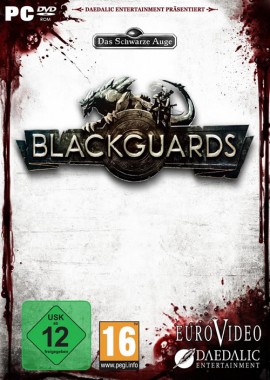 Blackguards is the latest addition to The Dark Eye series. Originally a pen and paper RPG system, The Dark Eye has grown to include several video games. Blackguards is a mature tale about a group of convicted criminals running from the law while looking to save the world. The game features turn based strategic RPG battles using The Dark Eye’s rule system.

Blackguards looks to shake up the classic hero saves the world trope by thrusting convicted criminals into the role of heroes of the world. Although I found the game had some very mature moments involving drugs, prostitution, torture, and murder, the overall plot was not nearly as dark as the description would suggest. There are definitely much darker and mature games out there in the market, but Blackguards chooses the slightly safer route of being just dark enough to easily earn itself a mature rating without being provocative or controversial. 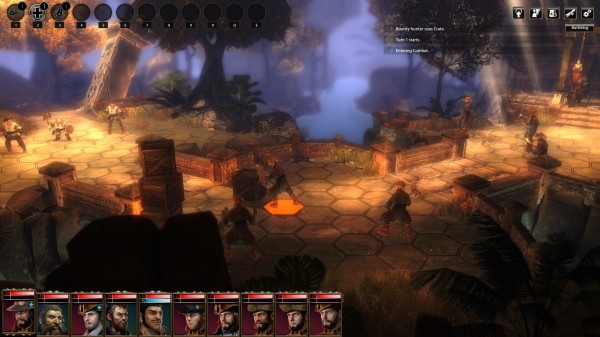 The writing in Blackguards is a bit of a mixed bag. I found the beginning of the game to be a little silly, but the game manages to have some great moments. The writing improves as it goes, and is generally solid with a great cast of characters. Unfortunately, the more mundane writing of combat dialogue was overlooked. Each character has only a very small handful of sayings they will utter through the course of combat, which becomes very repetitive.

Blackguards will be instantly familiar to anyone who has played table top RPGs as the rule set is similar to classics like Dungeons & Dragons. There are two difficulty settings for Blackguards, one designed for veterans familiar with The Dark Eye’s rules and one for those new to the series that will automatically assign skill points based on a simplified version of the rule set. The game uses hex based combat maps and adventure style point and click gameplay for the story. Daedalic Entertainment is also behind the adventure game Chains of Satinav in The Dark Eye universe, which explains the setup. The point and click adventure mechanics are standard fare, with nothing to complain about. 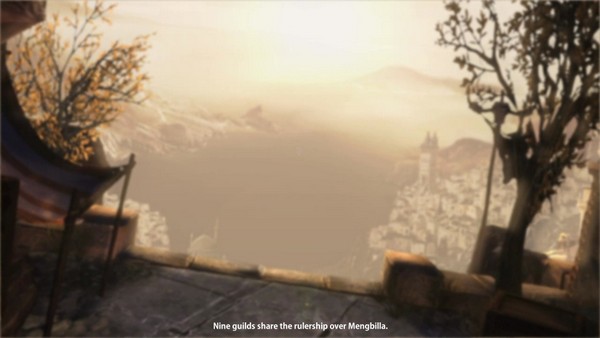 The real star of the show is Blackguard’s combat system. Because the game uses The Dark Eye’s rule system, combat works smoothly and in a predictable manner. Roll for initiative, action phase, rinse, wash, repeat. Although Blackguards does a great job of reminding players that they are playing a video game version of a table top RPG, Daedalic Entertainment doesn’t go all the way. I would have really liked to see the results of rolls in the combat history. There are over 120 combat maps to play through. Many are littered with line of sight obstacles, traps, and interactive objects, encouraging strategic thinking. There is a spectacular variety of scenarios, which does keep the fights interesting. 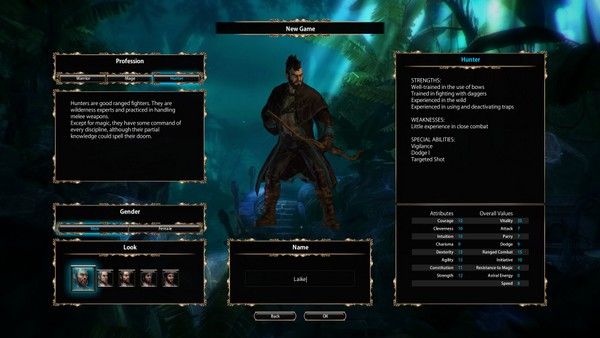 Players can hover over their enemy with the mouse cursor to get the probability of success based on their stats. Unfortunately, the game does not show when 100% probability is possible or when 0% probability is possible, which is annoying. The UI is based around right clicking enemies to bring up a ring of icons with possible skills. Commonly used skills can be dragged to a hotbar bound from 1-0. I found this system works well for characters based on physical damage, but magic users have to contend with some extra frustration. Each spell circle is broken down to four quarters, each representing a spell level. The size makes things rather difficult to click, and using characters with large spell repertoires becomes annoying.

The hex map takes a little practice to get used to. For the most part, right clicking on a hex will allow the character to interact with that hex and anybody occupying the hex. However, there are times where clicking on the hex will have no effect. I have narrowed down these troublesome hexes down to ones with some sort of object in them, such as flowing water. To deal with these hexes, I found myself having to click near the edge of the border to move my character onto the hex, or right clicking the enemy directly to attack. 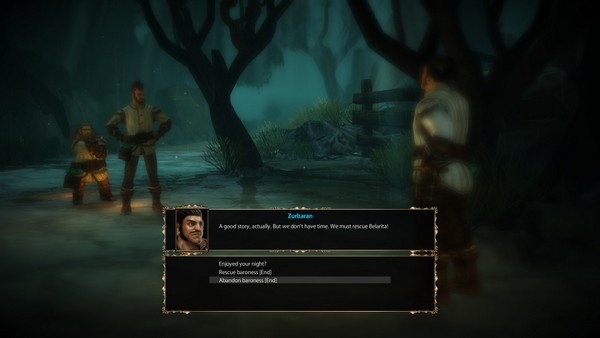 The game’s AI provides a good challenge, even at normal difficulties. However, I wish the pathing was smarter. The game will walk characters through visible traps and natural hazards, even though there is a safer path of equal distance available. I found myself moving characters one hex at a time on maps with traps and hazards, instead of contending with the poor pathing.

The items in Blackguards could use a little work. Though there is better armour to discover has the game progresses, there is very little improvement on melee weapons. While spellcasters see a consistent growth in their spells and ranged fighters gain access to new arrows and bolts, there is very little upwards progression on melee weapons. Of course, players could always choose to equip their character with three different types of melee weapons, but that would also require spending precious AP points on improving skills with other weapons versus dumping them in statistical improvements. 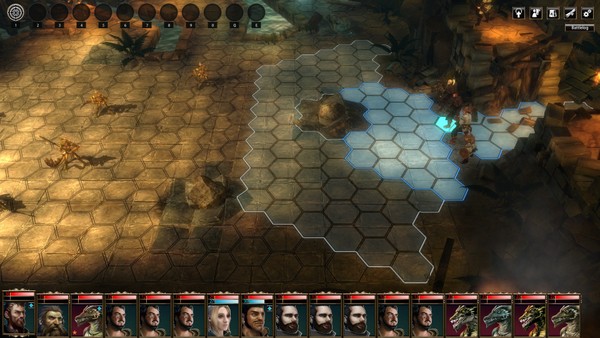 Blackguards is an excellent looking game. The backdrops are hand drawn and they look fantastic. The UI is simple and very fitting for a fantasy RPG. The hex map is drawn in on all the battle maps, evoking the feel of the battle maps found on table top games with miniatures. The character models and animations are well done. The loading screens are full of character concept art, which help make the transition between combat to the adventure portions of the game. I do wish there was more variety in the character portraits. Although this is a small complaint, often time players will be faced with battles with 6 portraits of the same characters, which makes telling apart enemies a challenge.  The camera angles move from an overhead view to a side view. It works great for the most part, but there are a few objects in the game that will be practically impossible to maneuver around due to the camera angle. There is a small icon error that needs to be patched in the character equipment screen. The boots and headwear icon are clearly swapped. It was a little confusing at first when trying to equip a Tricorn hat in the icon marked with a hat and getting no result. 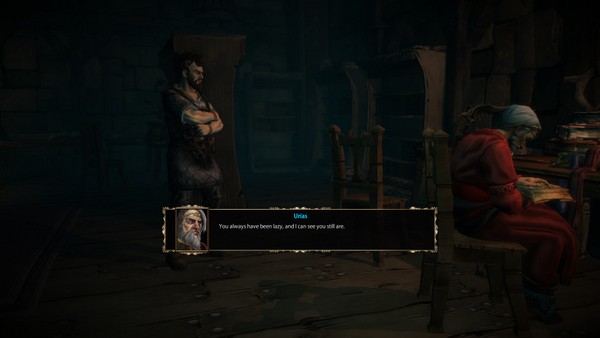 Daedalic Entertainment does a great job with Blackguard’s sounds. The music suits each of the game’s settings well. The game’s script has full voice acting, done by some very good voice actors. The sound effects are great, there are not many games in recent memory that actually evoked a vocal reaction from me. I couldn’t help but utter “gross…” out loud after listening to the Morfu slugs slither their way across the map. The only weakness is the repetitive nature of the lines characters will say while in combat. The triggering system can be a little repetitive, with some characters repeating the same line twice in a row without a break at times. 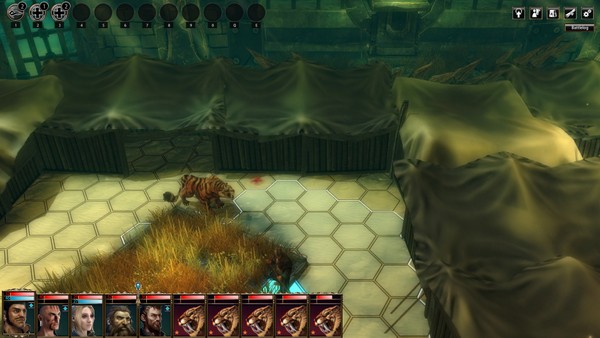 Blackguards is a solid game for RPG fans looking to check out a new system. The Dark Eye is one of the most popular systems in Europe and hopefully Blackguards will bring some attention from players around the world. Although the game provides a strong audio/visual experience and a good, but tame, story, there are some problems with the combat system that may scare off non-hardcore RPG fans. There is a ton of content for $39.99, with more than 40 hours of adventuring.  It’s a shame that Blackguards needs some tweaking before it’s ready to break into the mainstream; however, Daedalic Entertainment has made a great step towards that goal with the game.