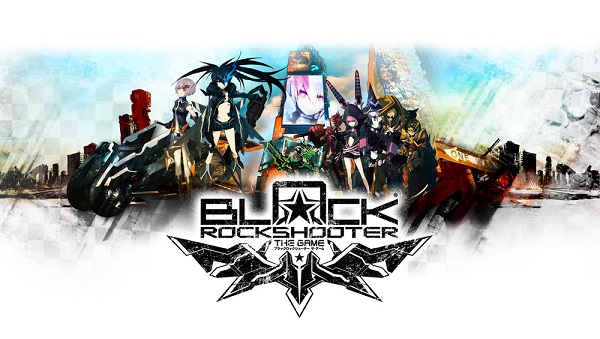 Story:
It is interesting to note that anyone who may be familiar with the various Black Rock Shooter anime or manga releases likely will know that pretty much every release containing the titular character is more or less a self-contained story that features BRS coming from a number of different origins and battling against various foes. 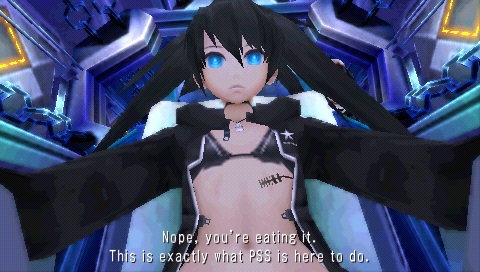 In Black Rock Shooter: The Game, players are introduced to a post-apocalyptic world where an alien invasion has wiped out almost every human on the planet. In fact there are roughly a dozen humans still alive battling against the invasion and as these last survivors begin to fall, they must use their last trump card, Black Rock Shooter. BRS is introduced as something of a human clone with abilities far surpassing anything a human could ever wish to accomplish and she will need to use all of her abilities to annihilate the aliens and various other enemies which will stand in her way.

As far as story length goes, Black Rock Shooter: The Game actually can take around thirteen to seventeen hours to complete, however the length of a story doesn’t always equal quality. In fact in BRS:TG’s case, the story can be very painful at times thanks to the fact that almost every character you come across will fit into an archetype we have seen a million times before. 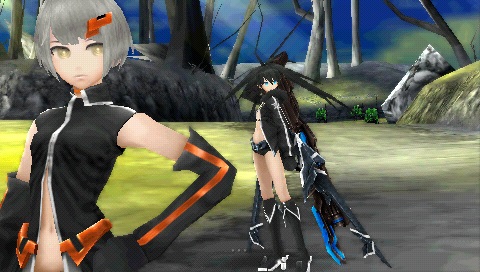 While BRS herself is developed nicely as she grows to be more familiar with the world and being able to interact with those around her, the rest of the characters are terribly generic. Because of this, many may feel disenchanted with the experience despite a few unique plot points and nicely handled main character.

Visuals & Audio:
Now before we go into the graphics of BRS:TG, it is worth noting that the title was originally created back in 2011 and is at its core, a PSP game (though it is playable on the PS Vita.) However despite its age and the aging system it was developed for, this title is actually surprisingly decent looking. Black Rock Shooter retains her signature look and wields some nicely detailed weaponry and the various characters and bosses that she comes across compliment the art style well.

Even the environments in the game are nicely varied and given a decent amount of detail. While the setting may be a post-apocalyptic world there are a number of interesting twists that place players in unique landscapes to fight against the enemies they come across. Now unfortunately when it comes to basic enemies, not only are they poorly designed but the game suffers from the age old trick of palette swapping enemies later in the game, causing basic fights to become even more repetitive. 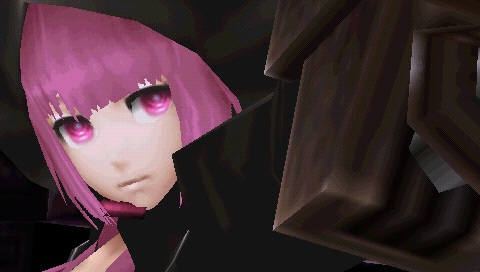 However one thing that does make up for the repetitive basic combat is the fact that BRS:TG sports an excellent in-game soundtrack which does a great job enhancing the action. It is worth noting though that NIS America did not provide any English dub for BRS:TG, so the only audio option is the original Japanese voice track with English subtitles. This isn’t too much of a loss however thanks to the fact that the original cast did a great job with the characters, but there are a few lines of dialogue which go without translation during some of the game’s boss battles.

Gameplay:
With a title such as Black Rock “Shooter,” many gamers will be expecting BRS:TG to be a game involving plenty of shooting and while they certainly aren’t wrong, the developers behind the title have actually created an engaging and somewhat brilliant battle system. While a bit off-putting at first, the combat system actually manages to bring the game to a new level by offering fresh combat mechanics designed around an old principle. 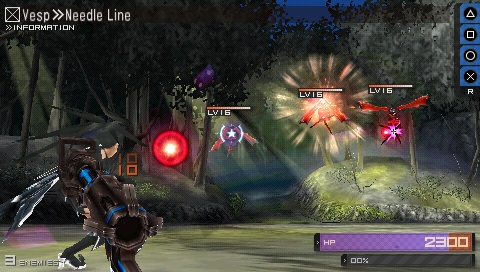 You see, whenever players run into enemies as they are exploring an area, they are placed in a battlefield where they will have to aim and shoot at the enemies to defeat them from a third person, over the shoulder, perspective. However BRS is not able to move on the battlefield freely and is locked into a “on-rails shooter” style system. Players are given the basic options of shooting enemies, blocking incoming attacks or dodging out of the way of attacks. The only direct control the player has over BRS is her aiming reticule to shoot at the various enemies on the battlefield.

To make things even more interesting, Black Rock Shooter: The Game also features a sort of turn based mechanic where every action the player does, short of blocking, fills up a “heat” gauge which will stun-lock the player for a short period of time if it fills up fully, leaving her at the mercy of the enemies’ attacks for a dangerous period of time. 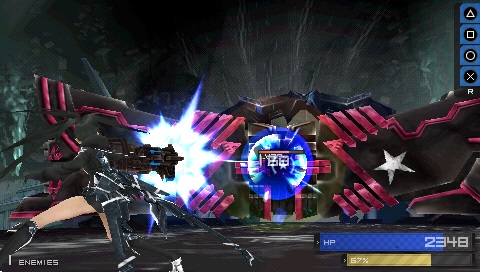 There are numerous RPG aspects to the title as well and these are worked into the game via a leveling system where BRS gains experience points after each battle and levels up with automatic stat distribution.  By leveling up players also have a chance to unlock a skill which can be used in battle. These skills are called “active abilities” and each of them has a special trait to them, either damaging all enemies on the field, delivering destruction to one opponent via free-aiming or lock on and more. There are even buff type abilities which allow BRS to use her various attacks and dodges to an increased effect without worrying too much about the heat meter.

As it stands, this combat system is what makes BRS:TG a great title and although it may not be the most challenging game, being successful at reading enemy attacks and aiming to take down foes is essential to surviving some of the more challenging opponents you will face off against. Things can be made a bit easier thanks to various passive abilities that can be unlocked, of which players can equip as many as they wish. These passive abilities usually boost the player’s stats or offering special status effect boosts to their normal shots. 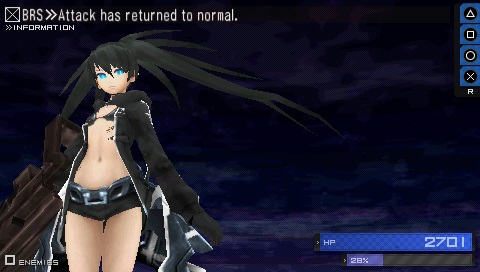 Once the player has finished the title, it is interesting to note that there is a decent amount of replayability found within the game. Players have the option to replay levels or tackle challenges to unlock extra skills, pieces of concept art, new cutscenes and even some extra costumes for the main character. This not only helps expand the title’s length but also gives completionists something to aim for.

Overall:
Black Rock Shooter: The Game starts off relatively weak thanks to some very poor writing and character development, but an amazingly enjoyable combat system helps make up for the title’s lack of imagination. Put that together with a great soundtrack and some nice visuals for a PSP title and BRS:TG is a great experience that is unfortunately bogged down by repetitive enemies and it’s unimaginative storyline.