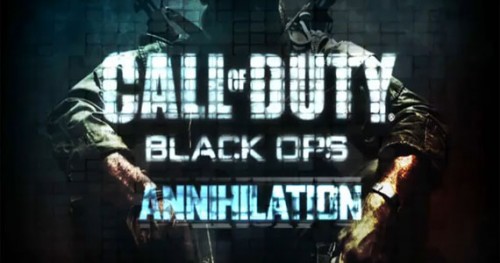 Overview:
Call of Duty: Black Ops has reached its third DLC map pack in the form of the Annihilation package. With two map packs already under the game’s belt, new maps are always welcome especially by those who play Black Ops online continuously despite other newer titles being released in the half a year since Black Ops’ release.

Previously we saw the Escalation map pack which took Black Ops’ zombie mode to an entirely new level with Call of the Dead. Does Annihilation’s Shangri-La do a decent enough job of following this masterpiece as a zombie mode and how do the four new multiplayer maps: Silo, Hazard, Hanger-18 and Drive in fair in this new package?

Shangri-La:
Now I won’t beat around the bush, a lot of the people who will be buying this DLC will be looking for a new zombie experience after killing George A. Romero plenty of times and shooting frozen zombies in the Call of the Dead. Now, if you ever looked further into the achievements for Escalation you may notice that one of them was to send a team to Paradise…. well paradise certainly isn’t all that it is cracked up to be.

The reason I mentioned Call of the Dead is because you will be taking on the familiar rolls of Dempsey, Takeo, Nikolai and Richtofen and it is obvious that the team has just arrived in their so called “paradise” thanks to the golden rod still existing in the player playing as Richtofen’s inventory. But enough about the characters and the set-up, how about the map itself?

Now while Call of the Dead was rather spacious and sprawling in the terms of its map size, Shangri-La is a bit more constricting but still just as large. There are a number of ways to get around the map, including a water slide, a mine cart and even a pressurized spout of water that will launch your character to the ground above.

Besides the undead there are plenty of traps to worry about that could easily down your character as well as a few hits from a zombie will. But these zombies aren’t your standard affair either, there are a number of female zombies that will attack you alongside male zombies, though these are mostly cosmetic. 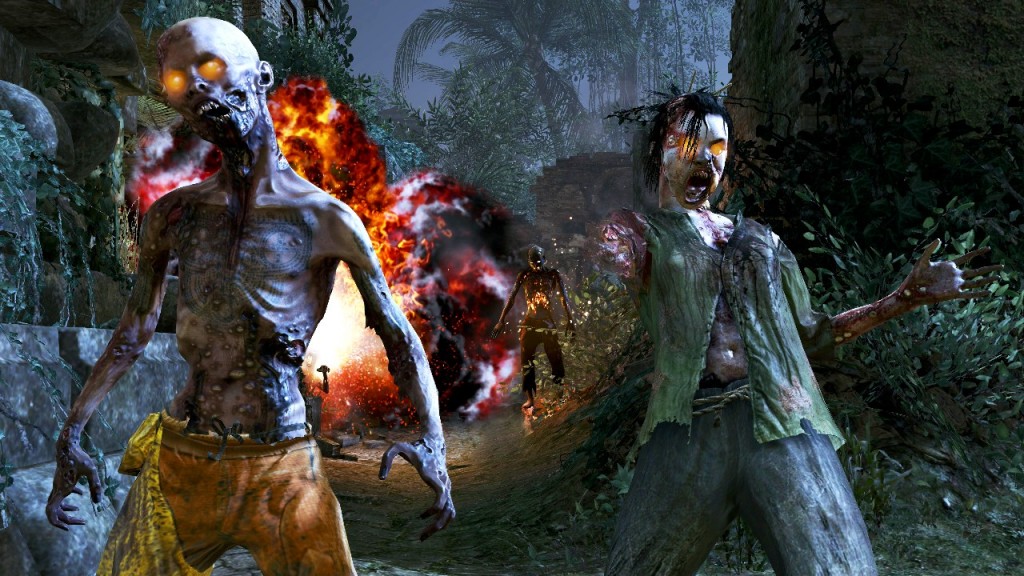 What is new here is the napalm zombies which appear occasionally. They take much more damage than a normal zombie does which makes them harder to kill and they also explode when they die, causing damaging flames to be left on the ground and any players nearby the explosion hurting and on fire.

Shangri-La is home to plenty of new content, whether it be zombie monkeys running around, environmental traps ready to pierce through your character, new weaponry (including a shrinking gun called 31-79 JGb215), new zombies and plenty of Easter Egg and hidden content. The amount of secrets in Shangri-La certainly rival that of Call of the Dead, so many that you will be spending hours of time searching through the level, all the while fighting off the undead and trying to discover the way to find the focusing stone.

Hazard:
One of the more interesting maps in this package is the Hazard map. The map itself is based around a golf course and therefore contains plenty of open spaces. The map itself is well done and is perhaps the prettiest looking map pack of all, with bright colors and the unique setting itself some may find Hazard to be their favorite map. 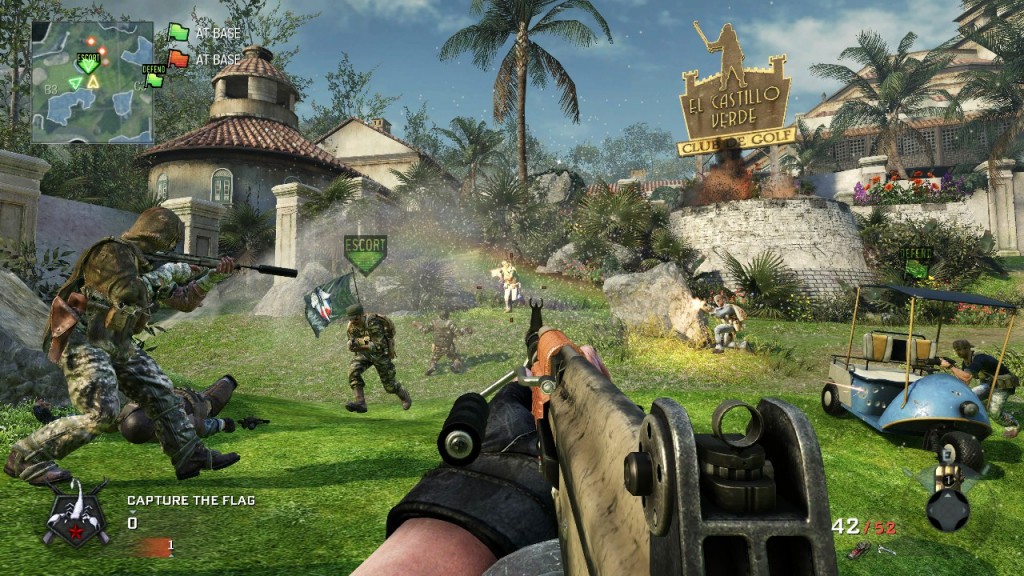 On the other hand, because of the wide open spaces the map is very much a sniper’s paradise. If you do not like to play as a sniper then this map may become one of your least favorite simply because lots of players simply sit and camp in sniping positions, though well rounded players should still be able to run and gun and pick off enemies. Hazard is perhaps the best map for any of the objective based battles simply because it forces players to actually do something besides hide and snipe.

Drive-In:
Perhaps the most interesting map of the package, Drive-In, also known as the Galactic Drive-In is the best map of the entire package. There is a good mixture of close quarter combat areas as well as sniping areas that will let everyone get a taste of what they enjoy. There is plenty of cover to be hand and your trigger fingers will be twitching often as you see an enemy disappear around a corner. 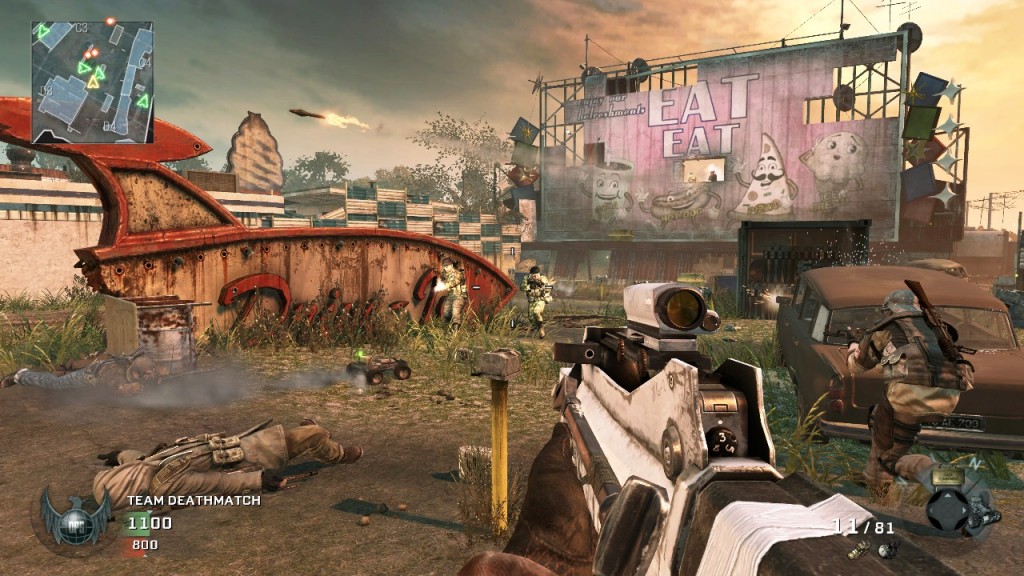 Because of the close quarters design of Drive-In it is a very good map for Team Deathmatch and can provide lots of fast paced fun. As far as objective modes go, it is rather interesting at times with heavy fighting to complete the objective and lots and lots of kills all around. Just like Hazard, Drive-In is also a pleasure to play on simply because the map is designed very well and looks great. Not a lot of people will find themselves stopping to look around, but those that do will be treated to a great looking level, perhaps the best out of every map in Black Ops.

Hangar 18:
There is a reason this level is called a Hangar, and the main area of this level is centered right around it. That being a SR-71 Blackbird that players can climb on and use to their advantage to shoot enemies below. The plane sits center in the level and is often where you will find a lot of combat occurring at times. Of course fighting atop of the plane has its own risks as well, because snipers can pick you off easily and others can try to sneak behind you. The level is rather good for Team Deathmatch and average for objective gameplay. It feels unique only for the fact that there is a Blackbird in the middle, but besides that you will find it’s gray overtones to be a bit too familiar. 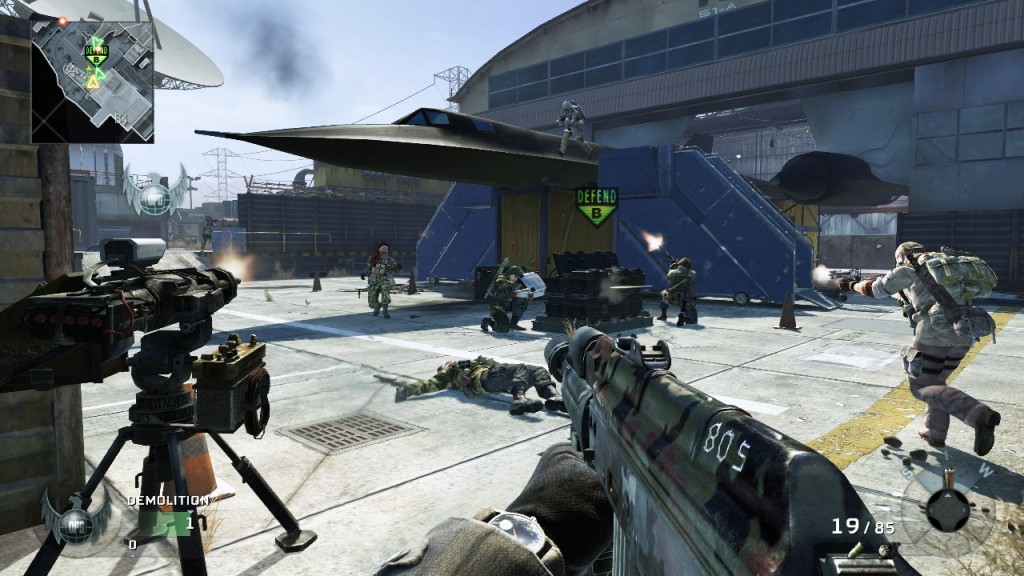 Silo:
The second largest map of the entire package is Silo. However this isn’t to its advantage, because Silo is too large for its own good and a lot of the combat often focuses around the edges of the battlefield, meaning a fight on Silo is usually going to be a very slow battle or ending with time running out. Unlike Hazard, the largest level of the package, Silo is more broken up with various buildings which breaks up combat and usually involves chasing enemies, or being chased yourself. The level has a nice touch of missiles shooting in the background which helps provide some good atmosphere but otherwise Silo is a rather unimpressive map that is going to feel very familiar to other maps already provided with Black Ops. 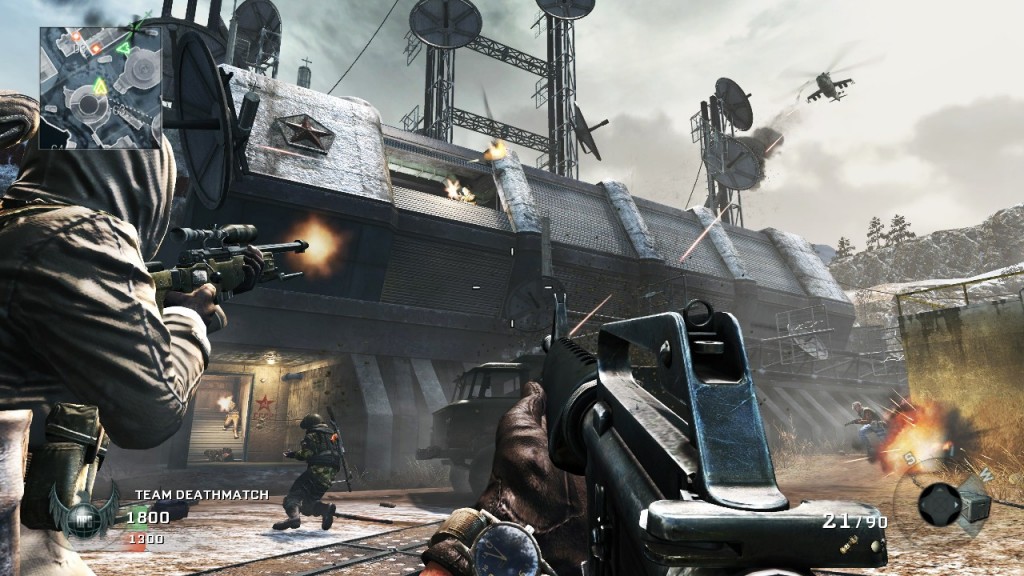 Overall:
A lot can be said about how, three map packs in, Treyarch can still manage to provide at least a few unique maps to help heighten the online experience. While Silo and Hangar 18 may appear rather bland in appearance and similar to things we’ve seen before, Drive-In and Hazard will provide the much needed breath of fresh air to the multiplayer map choices. There is a good balance here between objective and team deathmatch styled maps and most maps, minus Hazard, allow any sort of playstyle to be enjoyed. Shangri-La is a fun experience with plenty of new things to see and do, but it is difficult not to compare the experience to the much more interesting and enjoyable Call of the Dead. In the end you will find yourself enjoying most of these maps and blowing up zombies with a bamboo spike claymore is always fun.

I give Call of Duty: Black Ops Annihilation DLC: