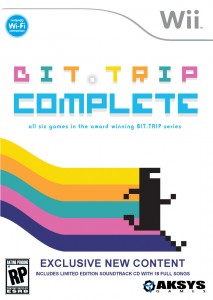 Overview
I have to admit I had my reservations about trying a new retro game. However, BIT.TRIP COMPLETE encompasses six differently mastered games that incorporate individualized gameplay. BIT.TRIP COMPLETE consists of Beat, Core, Void, Runner, Fate, and Flux. Taking traditional values and adding exciting gameplay is what BIT.TRIP COMPLETE has to offer. Let’s delve into the true reasons of its success.

Gameplay
With six different types of games there are six distinct versions of playability. Each can be easily identified as a classic arcade game and provides challenges to make the player want more. Every version contains modes that can be achieved during gameplay. The modes address the current progress you are making. Performing well gains you modes such as Mega, Super, Extra, and Giga increasing bonuses to your score. However, doing poor causes a decrease in rank from your current state to a lower one. From Hyper you can be reduced to Nether which is the lowest and most colorless state. Miss enough times in this mode causes you to lose the game. In order to make the critique accurate, I will discuss each game individually and conclude with a lasting impression.

Holding the Wii Remote horizontally you can navigate through the Beat menu by tilting the controller forward and backward. This motion moves your pong bar up and down along the screen. The objective for this portion is to accurately hit each “beat” in order to create a musical tone. The longer you avoid missing the beats the better your overall score will be. By continually hitting the beats, you advance in mode which offers even more bonuses and spits out a lot more color. 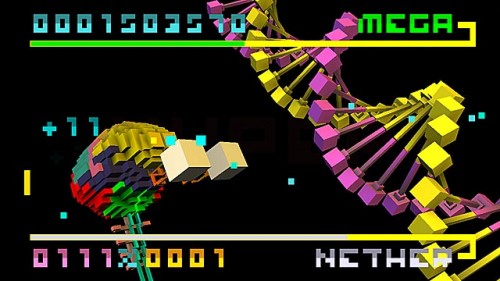 The difficulty can change slightly due to the speed of the beats. With easy selected, missing beats isn’t as painful to your mode progression. Normal and hard provide harsher punishments to your bonuses. But the real challenge is in identifying patterns and learning from past mistakes. By doing this you can ultimately memorize the where the beats are – similar to Guitar Hero. A friend observing told me, “This is mesmerizing!” I couldn’t disagree.

Have a total of four players join in on the fun collectively attaining a high score. Each player is shown in different colors to slightly decrease the confusion of spasmodic color that is seen alone in single player.

While still in the horizontal position, Core is a directional shooter that is similar to Beat. Utilizing the +Control Pad, you are able to shoot a laser with button (2) out of the center in four directions: up, down, left, and right. The objective is to hit the squares before they pass by in each direction. Understanding patterns is extremely important and throws me out of whack every time. At least in Beat the squares only appeared in one direction, but Core definitely brings a hardcore challenge. To be successful you need to have fast reaction, good timing, and pure luck. 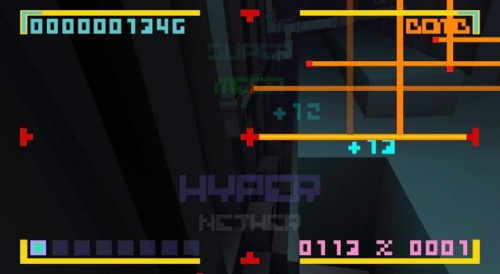 Additionally, you can use a bomb to remove the screen of all squares. So if you are having a tough time in a certain section, hit button (1) to release the bomb. I wish there were an endless supply of them…

This mode would only make sense to add an additional player, and you can readily do so. By having a friend play, you can separate into two separate quadrants and beat down this challenging foe. 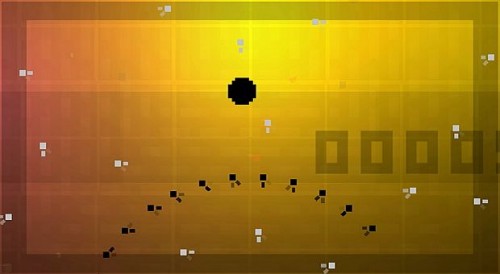 One major problem that I have noticed in this version is the continue option after death. Granted if you die in the first level, you might as well skip the continue and just start over. However, the main problem is after attaining a checkpoint such as 1-2 or 1-3. By completing the level to the checkpoints, you should be able to use a continue after death to come back to the checkpoint. After dying in 1-3, I used a continue and end up restarting in 1-1. This was an upsetting find and made me wonder if there were other instances like this throughout the rest of the collection.

None-the-less this version can also be played with four total players. With all the white squares floating around you might be better off with a single player, but at least you could make a nice blame game out of it.

By far one of the most enjoyable games, Runner offers a cute recognizable version of Pitfall. In Pitfall you are able to control the movement of the character, but Runner has continuous movement where the player can only control actions of the running CommanderVideo – pixilated humanoid. Using the +Control Pad, CommanderVideo can perform neat tricks such as sliding, vaulting, kicking, and blocking. Otherwise the player can only perform jumps using button (2). 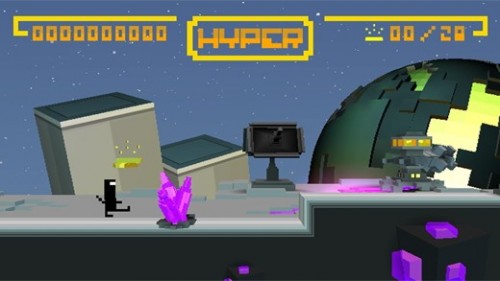 Each level contains gold bars that can be collected for more points. By collecting all of the available bars in each level, you can access a bonus stage. The bonus stage resembles Pitfall almost too well. Unlike the arcade classic, you do not get to swing over crocodiles. But you do get to jump over fire and collect gold. Grab as many gold bars to achieve the highest score in bonus mode.

It’s time to grab that nunchuck or classic controller again. Fate offers a unique ride by providing a side-scrolling shooter. By holding down the (A) or (B) button, CommandoVideo dishes out a series of bullets. Use his weaponry for acquiring + symbols which are key to attaining high points. As you dodge incoming attacks and grab +’s, your mode increases. Expect a lot of bullets flying in your direction. Don’t worry if the bullets pass through CommanderVideo because it only hurts him if he is directly hit on the lifeline he is bound to. 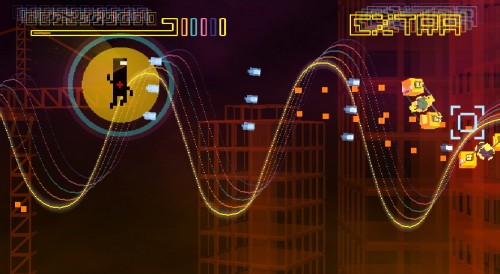 Boss battles in this mode are wicked. You need to continuously move along the lifeline in order to avoid a constant spray of bullets. Only by dealing direct damage can you defeat these hardened battles.

Did I mention you could also choose to play this mode with another player? By tuning in another Wii Remote, you can cooperatively play as CommandoVideo. With one player controlling movement, the other player can actively shoot opponents. Make sure each person gets credit in the high score ranking – don’t be selfish!

How do we explain this one…? Perhaps being the directional opposite of Beat would suffice. Instead of being on the left side of the screen, you are placed on the right. However, this is not the only difference that separates the two. Flux takes the pong attribute even further by implementing circles. While trying to hit every beat, you must also avoid the circles to gain points. Hitting a circle causes your mode meter to go down. 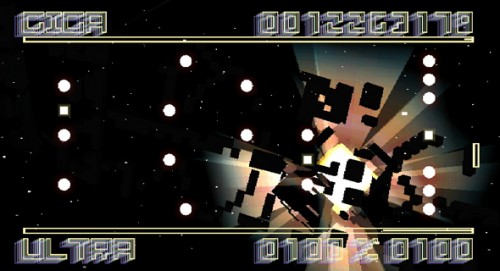 Slightly more complicated than Beat, Flux only allows two players to play simultaneously. Since there is more than one objective, this version would prove too difficult for four players.

Graphics/Audio
Retro in nature the graphic foundation reminds gamers of an 8-bit pong or classic arcade shooter. But the distinction that is clear is that the 8-bit graphics are brought to life with modern engineering that creates a RAVE party in the immediate vicinity. As you progress in any six games, the colors changes according to the mode you have reached. Higher modes dish out vibrant colors that have you second guessing your movements.

With retro graphics you also encounter old fashioned beats. The most impressive aspect of singular interlocked beats is an entire soundtrack dedicated to the in-game music. By purchasing BIT.TRIP COMPLETE, you not only receive six games but also a separate soundtrack disc. All I can say is, “Gaijin Games, thank you!”

The in-game audio is fun in its own right. Readily, I found my friends adding to the tunes while I was fully engaged. However, the mood gets pretty depressing if you stay in Nether mode.

Overall
BIT.TRIP COMPLETE gives “tripping” a whole new meaning. Mastering old concepts and adding modern mechanics makes BIT.TRIP COMPLETE an adventure every time you turn on the Wii. If your eyes start to water, the game is working its magic.

Six games offering different playability makes the collection unique. While Runner may only be single player, Beat and Void offer up to four potential players. Play alone or amongst friends and be prepared for quite a “trip”.

BIT.TRIP COMPLETE dishes out a stunning epileptic shock for