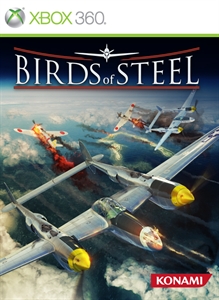 Overview
While not being a flight simulation junkie, I have learned to step out of my role-playing box to attempt the flying genre. From what I can tell about my previous flight games, there is a bit of a learning curve to master the controls. Too many buttons or movements can make or break a title in this genre, but thankfully Birds of Steel addresses my lack of aerodynamics know-how. Edging on crash-n-burn status, I urge both aviator elites and premature pilots to read on for my overall rating.

Story
353 Japanese fighters began reigning down upon the unsuspecting naval base of Pearl Harbor on December 7, 1941. Sounds of bombs blasting rang through the halls of the battleships awakening the crews to something more than just a drill. On this day, the Empire of Japan had ended their negotiations with the United States and in turn declared immediate war. No longer were Americans the diplomatic outsiders; the war was brought to American soil, and the conflicting emotions of this day could never be shaken. 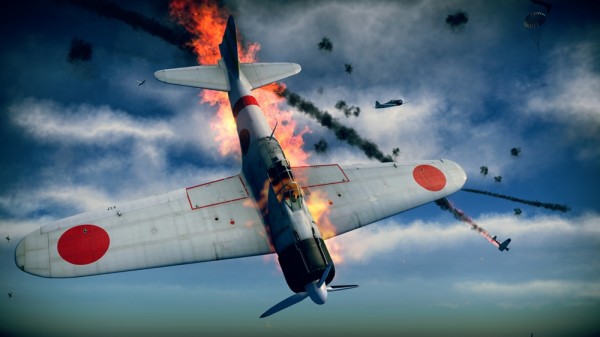 Birds of Steel encapsulates the very essence of World War II by utilizing actual war footage and recreating moments of history during gameplay. Even though the story goes way beyond the “Attack of Pearl Harbor”, the event is one of the beginning missions and pulls you into the very history and emotions that occurred that day. Commanding one of the salvageable aircraft, you are able to defend against the onslaught of Japanese fighter planes and bombers. Mission length shortens the intensity of the battle, yet the resonating emotions from prior history lessons provides me with a legit visualization of the event. Previous knowledge of the war is not necessary to understand; however, it enhances the visuals that compel you to play further through the story.

Gameplay
Learning the controls to a flying simulator generally takes time and effort to master. Gaijin Entertainment did well to address this issue by incorporating separate difficulty levels for beginner (simplified), intermediate (realistic), and advanced (simulation) users. Being one of the first options a player decides for type of gameplay, it is important to first operate your aircraft in tutorial missions to grasp the vast differences of each difficulty level.

While teetering on crash-n-burn status, simplified difficulty is my comfort zone. In this mode any airplane is slightly more manageable and not necessarily always the main focus of enemy fire. Movement becomes a major issue as the game progresses because your plane will encounter weaponry like flak jackets and machine turrets. There is a noticeable difference when flying through a flak jacket in simplified versus other modes. Players will be able to maintain velocity in the default mode yet will be overwhelmed in higher difficulties with sudden changes of flight direction and plane durability. Realistic mode slightly differs in simulation by allowing enemy markers on the battlefield deciphering axis and allied units. Simulation offers a hardcore type of environment where players must identify there opponents strictly by sight and knowledge of the battlegrounds. I hope my CPU teammates appreciate friendly-fire. Beyond choosing the difficulty, players may also endanger themselves further by limiting ammo, fuel, or both during any mission. This aspect is to make a mission even more challenging, but I would rather keep my unlimited fuel and ammo just in case. 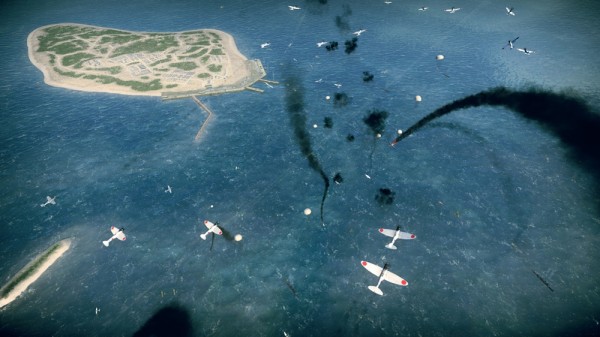 An interesting concept thrown into a flight simulation is aviator level. Completing and even failing missions or battles will accrue experience for your pilot and in turn add currency to your bank. Conjointly gaining experience and currency will allow players the chance to purchase new planes in their hanger. The ability to purchase new aircraft allows for further customization and individualized gameplay. Advanced aircraft can only be purchased by having bought the preceding aircraft and gained the appropriate level. Each aircraft has a different set of available weaponry, so advancing to newer models can only be beneficial.

Leaving your own insignia on an object helps personalize the experience whether you are wearing a guild tabard or having a half naked lady on an airplane’s wing. While in the hanger, you are able to choose a purchased aircraft and customize it with interesting decals. Even though this may cost you a small amount of your fortune, delivering a personalized touch will help identify yourself on the domination battlegrounds.

As the campaign is based around the central story of World War II, versus mode is strictly an open battlefield destined for a murderous rampage. Let’s first establish that I have a few concerns about the effectiveness of the multiplayer mode of “Domination”. In this one mode of battle, combatants form into teams of Axis Vs. Allies and must vie for control over changing points on the map. Thus far the match is set up as a king of the hill – well skies – and requires a plane to last a long period of time in a zone to decrease opponent control. Once an team reduces their opponent to “0” dominance, a victory will occur. The main concern is with respawn locations and length of time to reach the action. Once you have died in battle, you are put into a respawn queue that lasts roughly 20-60 or more seconds depending on how many deaths you have accrued. Respawning at your starting location sets you further away from the rest of fight and feels time consuming just to get back into the fray – that is if the fight isn’t over.

One of the major selling points of Birds of Steel can be seen in the title’s dynamic missions. Similar to the maps used in the campaign, dynamic missions allow players to choose either side of the war and compete against AI through a course of several playable events. Other players online can join in your already created mission and help defeat your opposing forces. You might be wondering why dynamic missions are so special. Well, in dynamic missions you have the chance to be the Empire of Japan and defeat Allied forces to essentially rewrite history. Think about that for a minute and get back to me.

Visual/Audio
Going back to our hanger, the ability to customize the decals on the airplane does not seem like a big deal at first glance. However, having this option allows you to spend more time in the game by developing a persona into the aircraft. Not too mention you are also able to test drive your newly designed plane without needing to perform a mission or online battle. 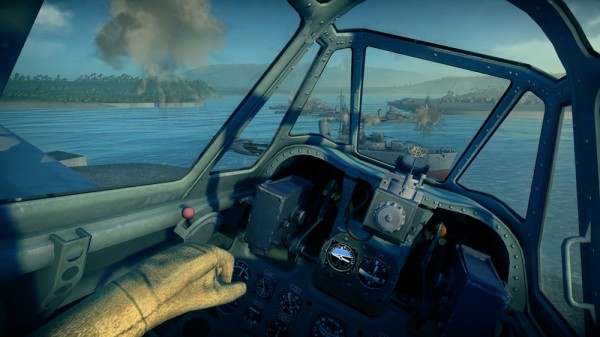 Visuals concerning the combat views change depending on the model of plane. There are several different points of view ranging from outside, cockpit, and even first person gunner. Depending on personal preference and how well you manage your plane’s controls, each view can help your performance. Normally, I find myself in the first person gunner seat, so I can administer my best shots possible. I hardly ever use the cockpit view due to the lack of visibility on the screen.

One of the better sound effects of the game is the impact of a crashing plane. While an explosion may not occur in reality, I can appreciate a good explosion when I fail to lift off the ground properly or crash into the ocean due to a poorly executed barrel roll. Other than explosions the sky is usually filled with sounds of overheated engines and machine gun fire. If you can’t kill a plane with the turret, ram ’em for a good explosion! 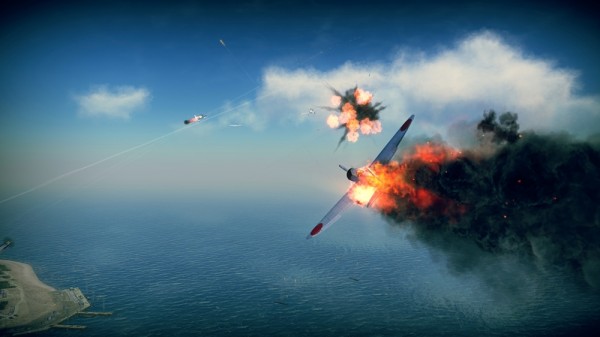 Adding to the effectiveness of the World War II history in the campaign, vocals were used to narrate the background story as well as define key mission objectives. For several moments I thought I was watching the History Channel on my Xbox 360. Video clips contained valuable information about the previous and immediate battlegrounds. I felt myself developing a purpose as I continued through the missions and watched the information cut scenes.

Overall
While I may not have a defined background in the flight simulation genre, I do believe that Birds of Steel excelled in many places that previous titles have not. The story followed through the history of World War II delivering a strong emotional experience tied with the “Attack on Pearl Harbor” and the “Battle of Midway” as well as other important battles of the war.

Difficulty is based on the stipulations that you as the player set. Simplified mode with infinite ammo/fuel can even pose challenges to inexperienced players. As you develop your skills in maintaining control of an aircraft, realistic and simulation modes will provide further tests just to keep your airplane in the air. Expert flight enthusiasts should enjoy the challenges of having limited ammo and fuel.

The major downfalls of Blades of Steel lie in the multiplayer spawning points and idling moments during missions. I will reiterate that the spawning zones are set too far from battle even if you are overheating your engine to get back faster. Also there are times when a mission calls for you to rely back to a checkpoint across the map. You could easily set the control down to act as an auto-pilot without needing further assistance. Go brush your teeth or do some crunches while you wait…

With some negative aspects, Birds of Steel provides an excellent campaign that covers an important history lesson. Allowing a child to play this title while learning about World War II would be conjunctive with homework and would prepare him/her for a test following the completion of the storyline. Bring on educational gaming!