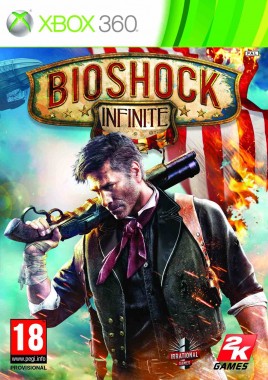 The thing about infinity is it’s infinite. It knows no bounds, goes on forever. The thing about Bioshock Infinite is it does have bounds; as a game it’s limited by what the hardware it is running on is capable of, and by the pre-defined ideas of what makes a game a game.

Bioshock Infinite is a first-person shooter but the shooting isn’t what you remember about it. Irrational Games has created such a rich world that the exploration, the adventure and the story are the best bits. Conversely, the shooting feels like a needless folly included so it slots easily into a genre and to help it sell. In my opinion the drama would be heightened not diminished if you knew you couldn’t shoot your way out of any situation. 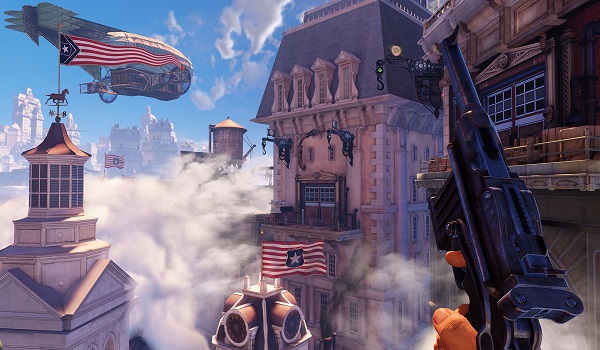 You play as Booker DeWitt as he crosses over to the strange world of Colombia in search of Elizabeth, a mysterious girl who you find locked away from the rest of the world in a tower. It has been that way since she was little, and with her help you uncover the dark underbelly of this city in the sky.

Bioshock Infinite is one of those games that becomes a real talking point for players. A story featuring alternate realities is bound to cause some confusion, so discussing your personal interpretation of the ending and significant events in the game, and arguing your reasoning behind your conclusions, becomes a popular past-time among gamers. 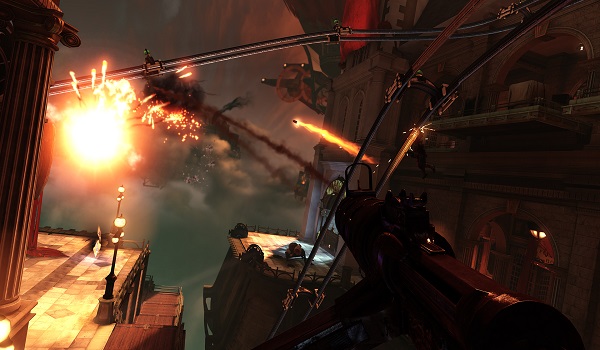 The story uses techniques like flashbacks, déjà vu and circular dialogue to reinforce its meaning, and the fact that it gives the player a lot to think about shows how well it resonates with the player. The developers give the illusion of choice with two approaches for going about one situation, one on LT, the other on RT. But for the most part it doesn’t bother with the whole morality complex where your actions affect the outcome at the end of the game, because Irrational Games recognises that a limited selection of alternative endings leads to players being placed into one version of the ending irrespective of all their actions in the game. In Bioshock Infinite, ultimately everything boils down to one definitive ending, regardless of how you played the game. 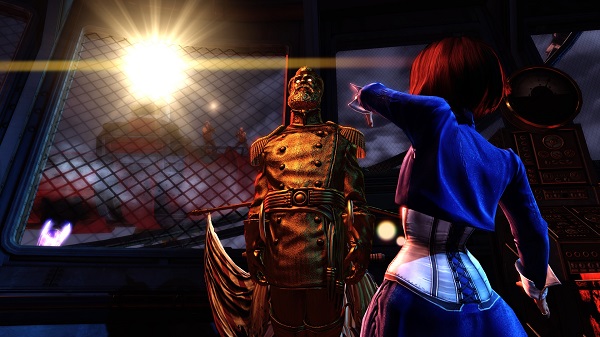 Irrational Games has clearly learnt from the mistakes of others before it that no one likes an escort mission. Although Elizabeth accompanies you the whole time, she’s not the helpless damsel in distress many games depict female companions as. Although for once it would make sense for her to need protection as someone coming into the real world from a life of isolation would probably be very vulnerable and have a lot to learn, the developers have acknowledged this wouldn’t be fun so said Elizabeth can look after herself. 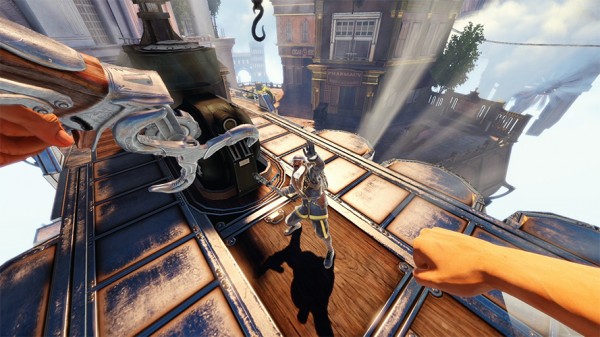 As it’s set in 1912, your arsenal includes weapons from that era as well as fictitious contraptions from Colombia with a distinct steam punk/industrial revolution vibe. It’s a weird place; the weapons are crude, cruel and unsettling. But nothing reinforces this more than the weird enemies you encounter. There are men, but it’s the strange machines and mindless drones which pursue you, twisted inventions from the minds at Irrational Games, that really make you feel out of your element. Irrational Games’ artist’s creative juices didn’t stop with Big Daddy – some of your foes in Bioshock Infinite really are quite disturbing. 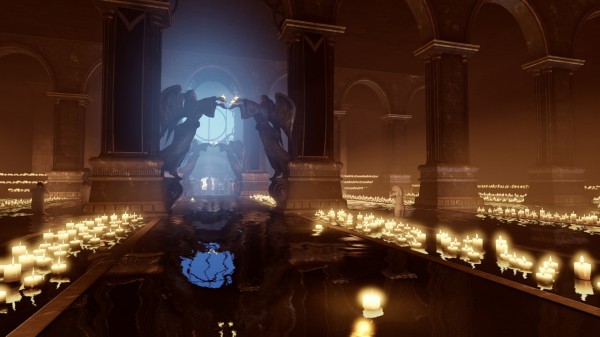 Through the sights and sounds of the city, Irrational Games has managed to fabricate a history for the city of Colombia out of nothing. It’s the developer’s attention to detail that makes Colombia capture your imagination. It’s an intelligent game; and there’s always something to read or examine – a piece of Colombia propaganda here or a curious piece of engineering there.

The game uses a much lighter colour palette than the previous Bioshock games while still retaining a sinister undertone. If you like stumbling around in the dark and struggling to find your way, never fear, as there’s plenty of levels that will have you reaching for the brightness settings on your TV too. 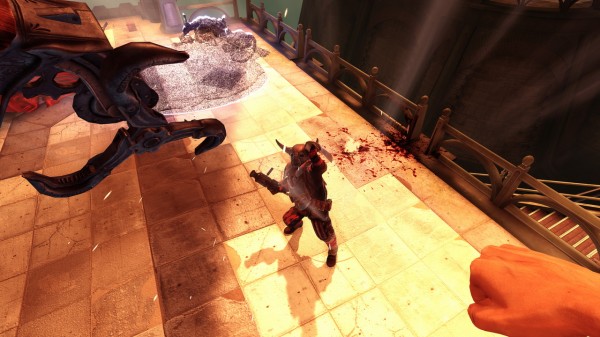 The graphics look good, the one exception being the lip syncing. The voice acting is superb but the character models don’t line up to it. The facial animations are off, meaning they look like ventriloquist’s dummies – making them, conveniently for the sake of the uneasy atmosphere, far creepier than intended.

The unnerving atmosphere would be nowhere without the music though. A shift in the music can completely change the mood, for which the sound and music guys at Irrational Games should be commended. It’s surprising how much a distorted sound quality as if playing out an old fashioned radio can transport you to a different era, an era you weren’t even alive for. The instruments used, the voiceovers all hint at a squeaky clean society but one closely controlled and where something’s amiss. 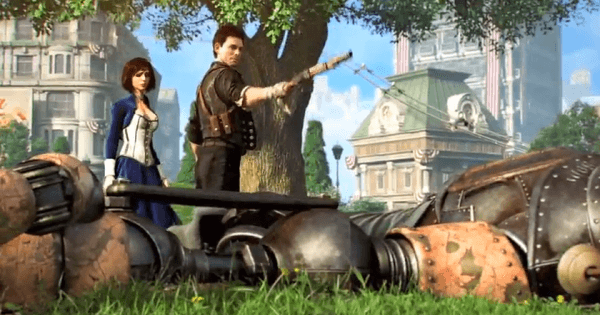 In the end Bioshock Infinite could have been ground-breaking but instead it settles for greatness. I don’t blame it, as in terms of its wider appeal it needs the first-person shooting aspect of it to sell. But in contrast to other games where you get through the boring bits to get to the shooting part, in Bioshock Infinite it’s the shooting that’s the boring bit you have to get through to get to the interesting part. I suppose it shows how intriguing and ambitious a world Irrational Games has created, as it’s more of a comment on the rest of the game than the shooting sections. 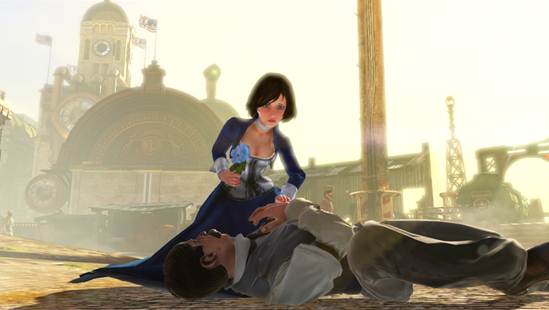 There are bound to be inconsistencies in a plot with alternative dimensions such as Colombia, but it pulls it off in a real head-scratcher which covers some complicated themes. It will be the next big thing for gamers to talk about until the next topic of discussion comes around, whatever that may be. At the moment though, I expect Bioshock Infinite will cause such a storm that it will be the only thing gamers talk about for the next couple of months.