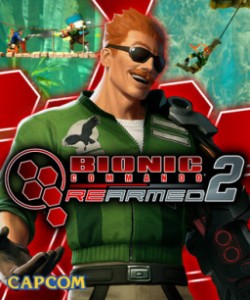 Bionic Commando Rearmed 2 (not to be confused with Bionic Commando 2, the failed franchise reboot that released in 2009) is a sequel to the retro remake of the original Bionic Commando that was released on the NES.  Keeping in line with Capcoms “living in the past” attitude, the game is made to mimic the restricted development of titles from the 90’s, much like its predecessor.  However, in this latest installment the developers decided to be a little risky and add in the ability to jump (gasp!).  Let’s see if this modern addition, among a few others, is enough to ruin the game or help

Alright, I’m just going to say this now, there isn’t much story.  You are 90’s era badass Nathan Spencer sporting the good ol’e spiky hair and manly mustache he was known for (also his big, bionic arm).  You are part of a special team of bionic commandos (hey!  That’s the title!) on a mission to rescue your former captain and confront Fidel Castro…errr…I mean General Vicente Sabio, dictator of the “Papagayan Islands” (totally not Cuba, nope) 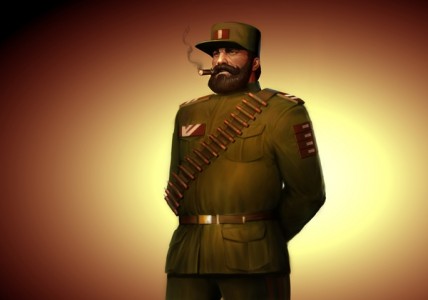 The story is little more than an explanation as to why you are doing the things you are doing.  You can get through the game without ever paying attention to the story and nothing will be different.  A handful of cutscenes or dialogue contain tongue-firmly-planted-in-cheek jokes and one-liners that would only make your grandma laugh.  The name of the game here is corny, pure 90’s style.

So this is where I’m going to do the most talking since much needs to be explained.  I preface this section with the sentence, “Remember this is a RETRO game.”.  However, just because it is made to feel like it was made in the 90’s does not mean it WAS made in the 90’s.  Technology has allowed us to make a FEW improvements in the creation and development of games and so you should keep that in mind throughout this review.

First and foremost, the grapple.  The grapple is essentially what made this franchise initially successful, without it it was just another piece of shovelware at the time.  You use your grapple to deflect attacks, grab objects and latch onto ceilings and overhangs to traverse the level.  Traditionally this was the ONLY way you were able to get airborne, even in the first remake, Bionic Commando Rearmed (1).  In Rearmed 2, thankfully (and much to the chagrin of the hardcore retro fanatic) there is a jump button.  The jump isn’t like Masterchief’s or Samus’s moon jump, but it will at least aid in your travels.  For all of you diehard Bionic Commando fans (if these even exist), the game rewards you with an achievement/trophy for never jumping, so at least you have that to look forward to since each and every level has been designed to be beaten WITHOUT the use of jumping, jumping just helps (a lot).

Second is the difficulty, which is to say moderate.  This isn’t Mega Man challenging, but to the average gamer it will provide a challenge.  On the “normal” difficulty setting you lose about 1/3 to 1/4 of your health from taking a bullet from an enemy.  Luckily, enemies only shoot one bullet every 5 or 10 seconds (even though they have a machine gun, more retro inspired backpeddling).  They also take about 10 shots to die, but you can mash the shoot button to dole out the damage relatively quickly, not to mention you get a handful of weapons that prove much more efficient.

Lumped into this difficulty is also the controls.  Much of the game surrounds the use of the bionic arm (grapple).  You use it to pick up barrels, flip switches and swing around, swinging being it’s most needed function.  As you progress the game will require you to make more and more precise maneuvers with the grapple while swinging, which to some will seem downright impossible if not only because of the way the grapple is implemented.  You can only shoot the grapple in 3 directions, Up, Diagonal Up and to the side.  When I say 3 I MEAN only three, none of this “wherever the analog stick is pointing” nonsense like gamers have come to expect.  This becomes an issue when pressing the grapple button will have it shoot diagonally by default unless you are holding up for up (duh) or…get this, down for to the side.  I really can’t explain to you how frustrating it is to try and manage with that while swinging around trying to grapple JUST the right spot to make up into a secret area.  Having “shoot to the side” mapped to down is completely counterintuitive and will likely serve as nothing more than a thorn in the players side.

Movement is very “clunky” (again made to feel like a retro title, not an improvement).  While the game does look very good, graphically, it’s better to just imagine it as an assortment of blocks.  By that I mean don’t think you can “cheat” the game by timing a jump just right and managing to get to an area that would have required more work.  The jump is only one “block” (or half-block, it seems) high and only 1 block long, so it won’t get you very far.  Due to your grapples poorly developed directional issues, if you make a wrong jump or grapple and find yourself quickly falling into a pit, there isn’t much you can do.  You can ONLY latch onto ceilings and overhangs, not walls so you will need to hope there is an overhang on your way down or you aren’t making it back alive.

Enough complaining, I’ll explain a typical level.  You mainly go from point A to point B, left to right (with some vertical travel thrown in) while taking down a few guards along the way.  As you progress you find new items and abilities such as a grenade, health regen (never use anything else but this) electric arm, etc..  These are all used to get through the level in a sort of metroidvania fashion.  I mention metroidvania because you will come across obstacles or secrets that you can’t access until you have an ability or item that you find later in the game, requiring some backtracking.  Some don’t like that, but honestly I love that mechanic, it rewards exploration and experimentation, two things that video games are based on so kudos to you Rearmed 2.  At several points you are told to hold the right trigger to enter “biovision” to essentially pause the game and began scanning the screen for marked set pieces and objects.  Once found, hover over them and press a button to find out more info, be it tips on how to play, what to do or what an enemies weak spot is.  Toted as a new and innovative feature, it’s pretty forgettable.  Useful for when you are just starting out and finding out what a bosses weak spot is but it is by no means a core mechanic that will change the way you play.  At the end of some levels are “bosses”.  I use quotes because at the start these are nothing, one is a soldier with a helmet that you need to grapple to weaken, another is a tiny R2D2-like robot that you need to grapple to weaken, etc..  They generally don’t pose much of a threat, though later on you fight some pretty monstrous bosses like a giant robotic monkey.  Nice sense of progression, but the beginning is a bit too rinky-dinky if you ask me. 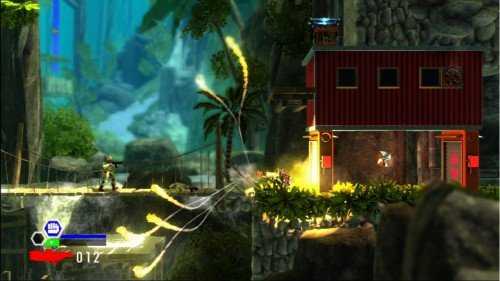 Aside from the poor, retro mechanics that plague the title, the game actually looks quite good.  Sporting that pseudo 2d-3d style that is gaining popularity (much to the thanks of Shadow Complex), graphically the game hits the mark.  Unlike Shadow Complex, however, Rearmed 2 doesn’t make much use of the background or foreground.  It’s more just a visual style than it is part of the experience.  Basically what I’m saying is, they could have done without it and the game would be no different, it just looks nice.  Upgrades and collectables visually appear and change on Nathan which is a nice touch as some games simply refuse to do that (cough cough FINAL FANTASY cough cough).  Animations look smooth even if they act clunky, set pieces are somewhat interactable at times such as a truck backing into playable space to unload a soldier, pulling on a support beam to cause a ceiling to collapse, etc..  The audio is VERY retro, which some may like.  It’s not my cup of tea but that is a matter of preference, so to each his own.  One thing I will say, however, is that in a handful of the levels, part of the music involves a repetitive chime or jingle which might trick you into thinking something you are doing is affecting the game.  It’s just part of the music so don’t panic.  Also to be noted is the game’s length, which is actually pretty substantial.  The game will take you 10-15 hours to beat and collect everything which honestly is pretty good for a digital game.  Some full-priced retail games last shorter than that.

Bionic Commando Rearmed 2 isn’t bad (you know a game is great when the reviewer needs to emphasize that) but it isn’t great.  If you are REALLY itching for some hardcore retro action with an updated look, I would suggest you look for something else like the Mega Man games, Castlevania or Shadow Complex.  Heck even Metroid Other M might work.  But with a $15 price tag and restrictive DRM (it REQUIRES that you be online while you play, if you aren’t online then you CANNOT play it) I really can’t recommend this game to anybody with all honesty.  If there is ever a sale that brings it down to $10 (preferable 7 or 8, half of the original price) or a change of heart from Capcom with the ridiculous DRM then I would feel better recommending this, but at the current price point with it’s restrictive DRM and handful of problems this title really isn’t worth picking up.

As it currently stands, Bionic Commando Rearmed 2 gets…