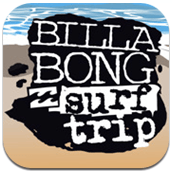 Story
As you can imagine, there can only be so much story behind a surf game, or for that matter any sports game or extreme sports game. After all, if there was any hint of a serious plot, players would complain in their masses as generally speaking, people want to jump straight into the action, whether that be running out onto the field, kitting up and charging into the fray, or in this case, grabbing your board and paddling out to sea to ride the next wave.

As a result, the game is lacking when it comes to story, which is in no way a bad thing. It’s just your typical underdog story of a surfer working his way up the surfing scene, travelling the world and pulling some ‘gnarly’ moves out on the waves. Sound and Graphics
The sound and graphics of Billabong Surf Trip by no means excell your expections after you’ve seen the screens; the grainy visuals are ambitious to put it nicely, and while the game wouldn’t work without the three-dimensional game world, you can’t help but wonder whether the developers could have put the technology to better use, rather than creating an experience a little rough on the eyes. It’s by no means a problem, and considering it’s on the iPhone, the graphics aren’t bad, although there are times when the camera goes funny and you can see through certain textures.

Then there’s the sound, which is good music wise. It’s got a small but quality playlist of surfer tracks that play in the background as you navigate the various menus. On the other hand the sound effects aren’t quite up to this standard. Lets just say you’d be surprised how irritating the sound of splashing water gets as you paddle through the ocean. Consequently, most will prefer down during actual gameplay.

Gameplay and Controls
In Billabong Surf Trip, you are quite literally dropped in at the deep end. Some things are touched on briefly, although for the most part you are left to figure the controls out for yourself. Adding to the discomfort when starting out, a lot of the characters offering guidance will often use surf-speak, especially when referring to tricks, which can leave those not down with the lingo feeling swept away. You control your surfer using two analog sticks placed on the touch screen, and while the learning curve is steep, moves are laid out logically in general. For example, in order to perform a 360 spin, simply rotate the stick in a circular motion. If you’re preared to put in the time to learn the controls, and then in turn, master them, it’s a rewarding experience, but it will take a long time, with lots of frustration-inducing practice involved. But if you are willing to figure everything out, there’s a god deal of fun to be had.

Conclusion
There are a number of benefits of being associated with one of the biggest Surf distributors, which the game takes advantage of in the form of customization options. The ability to shop around and equip your character with a selection of billibong surfboards and surf-wear gives the game an authentic feel, which is topped off by real-life surfers making an appearance as your mentors. The set of 11 famous real-world surf locations further contributes to this realism. However, in search of a true surf experience, I fear the developers may have left non-surfers behind. Much like real surfing, it’s hard to learn, takes a lot of practice and you mainly have to figure out the appropriate techniques for yourself. As a result, the inaccessibility of the controls and gameplay may deter some people, which is a shame as it’s a decent handheld extreme sports game when it gets going. Also  washed-up visuals -I’m just on fire with the puns- and repetitive sound effects, while minor, hardly help the games case. But,with all this taken into account, I can still say that it’s worth a blast, with a reasonable price tag with all the content on offer. Some may hate it, finding it overly challenging, whereas some may just love it if the controls happen to just click.