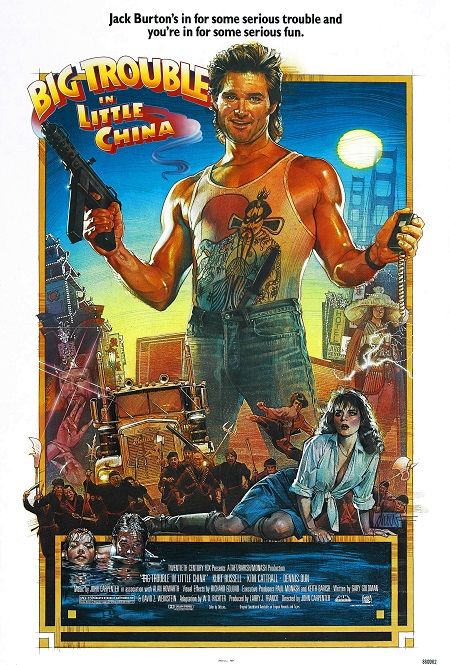 Although it is not entirely clear how or why a film develops a cult following, the works of director John Carpenter (more often than not) appear to have the unique quality required to do so. His body of work includes cult classics like Escape From New York, The Thing, Assault on Precinct 13, and Big Trouble in Little China. Being the cinephile that I am, I was excited at the prospect of seeing Big Trouble upon the big screen as any 80s action comedy involving highly choreographed martial arts really should be consumed. I flying kicked my way down to George St cinemas to check out the In The House screening of the classic martial arts comedy.

Jason ‘Jabba’ Davis and David ‘Quinny’ Quinn played host before the film started and warmed the audience up. As well as running a vigorous game of ‘rock, paper, scissors’ with members of the audience to give prizes away, they spoke a bit about various trivia tid bits regarding the film and its production. Of particular interest to me was Quinny’s comparison of this film to the first Mortal Kombat movie and how similar the visual designs of various characters were. A highlight for me, of this pre-screening entertainment, was when they asked a particularly proficient Jack Burton cosplayer to come up to the front and show off his rouge… watch the film and you’ll get what I mean. After they had finished warming up the audience, the screening proper started.

The film very quickly introduces us to its notional protagonist: a loud mouthed truck driver with more bravado than brains called Jack Burton (Kurt Russell) who is visiting his friend Wang Chi (Dennis Dun) in San Francisco. While the two wait at the airport; Wang’s fiancé, Miao Yin (Suzee Pai), gets kidnapped by a Chinese street gang. The gang were actually attempting to kidnap another woman but after Jack intervenes grab Miao instead. After foraying into the alleyways and of Chinatown and losing Jack’s truck trying to find Miao, Jack and Wang encounter strange supernatural forces at play in a battle far larger than they realise. They both have to team up with a strong-willed lawyer named Gracie Law (Kim Cattral) and a magic using tour bus driver named Egg Shen (Victor Wong) in order to rescue Miao and put a stop to an evil sorcerer, Lo Pan (James Hong), lurking in Chinatown.

The first thing you’ll notice with the writing is how hammy it is with lots of melodramatic and stilted dialogue. A lot of the dialogue of the Asian characters is nothing but quasi-spiritual exposition… like they’ve all spent time learning ancient wisdom in temples located on mountainsides. In juxtaposition, Jack’s dialogue is decidedly more lowbrow and shallow with Russell delivering the lines with an almost drunken drawl. Hong as Lo Pan brings a bit more nuance to his character by oscillating between stoic mystic and petulant child… so if you’ve ever wanted to see a millennia old demonic sorcerer curse like a spoilt pre-teen then this film is for you. The performances from the ensemble cast do an excellent job of delivering the over-the-top lines to make the, actually quite simple, narrative work with plenty of ham. If this film was a dish, it wouldn’t be kosher but the ample presence of ham are what make it oh-so-good.

Another thing you’ll notice is the fact that although Jack Burton is the main focus of the film’s narrative, he’s certainly not the protagonist as they bumble their way through complication after complication. Despite Russell’s bluster and bravado, the story is very much more Wang’s adventure as he works to defeat the villain and rescue his fiancé. A close comparison I could make would be with the most recent Mad Max film except where Max was a cool side-character, Jack is more of a loud-mouthed comic relief sidekick. It works exceptionally well in conjunction with the story’s overall parodic intent to spoof shlocky martial arts films of its’ time and ultimately makes this film have a greater depth to it which has given it the status of a classic. So although Wang may save the day, it’s Jack and his incompetence that makes this movie worth watching.

At this point I feel I should address the elephant in the room and talk about the film’s representation of women characters and the problems it displays. Pretty much every female character in this film gets kidnapped and needs to be rescued by the Wang and Jack. Although the character of Gracie certain has a lot of agency in how she develops the plot and is shown to be a capable protagonist in the story but by the end she largely becomes a damsel-in-distress. On the other hand; I believe the film does really well with its representation of individuals of Asian descent as although it does play with stereotypes of Asian characters in martial arts films as it does so with a fair amount of tongue-in-cheek self-awareness. I enjoyed the film but I do have to admit that these are issues which may upset some individuals.

The visual style of the film has a distinctly kitsch and over-the-top visual style to its direction. The action sequences are especially good examples with characters flying through the air swinging swords at each other or performing (somewhat dubious) martial arts moves with an equally exaggerated yell or grunt. Some of the costumes are also quite extravagant with Cattral’s, Pai’s, and Hong’s wardrobes especially earning a special mention. It all works in coming together to create a faithful spoof of 80s martial arts films which were popular at Big Trouble’s release and, for those who care to find them, the film is littered with homages to the body of work which inspires it.

The special effects which the film makes use of are a mixed bag but largely all in keeping with the film’s camp visual aesthetic. Largely I felt that the practical effects which the film employs for the various monstrous entities of Lo Pan’s lair were quite good with the floating eyeball monster being a particular stand out. The film special effects in regards to CGI were not nearly as impressive with fireballs and lightning leaping and arcing around the screen. It adds to the overall kitsch charm of the film but ultimately isn’t too impressive visually and I doubt any modern day movie goers are going to be in awe.

The audio is an interesting mix of 80s synth tones, which are Carpenter’s trademark sound, with a strong Asian influence. The soundtrack was produced by Carpenter and certainly works to create a unique background for the film’s soundscape. Although I understand that Carpenter’s musical work can vary in quality, in this film it does the job it needs to of reinforcing the action and plot beats. It generally maintained a fast tempo to help keep the film engaging and give a sense of speed and brevity to the action unfolding onscreen. It’s competent work but it didn’t quite leave me with a memorable impression either way.

I very much enjoyed this foray into the depths of San Francisco’s Chinatown with it’s eclectic cast and kitschy charm. The story was engaging and funny as the characters worked their way through the plot with their over-the-top, hammy writing. The visual direction was pretty awesome too, although a lot of the visual effects are quite dated by today’s standards. The soundtrack is solid but not something I would consider spectacular. Overall, it was a very enjoyable action comedy which was able to brighten the mood of even the grouchiest millennia-old, cursed sorcerer. An excellent start to the new season of In the House, kudos!

Big Trouble in Little China is a hilarious action comedy with great writing and performances alongside plenty of kitsch charm.
9