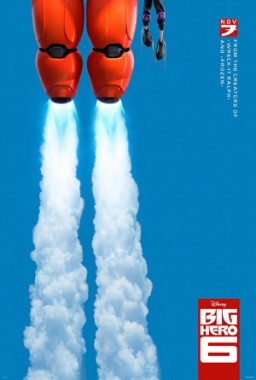 When Disney announced that they were making Big Hero 6 I’m sure I’m not the only one who was a little bit surprised. Big Hero 6 is one of Marvel Comics most obscure and out-there properties, so choosing to adapt it into a full-fledged animated movie was unexpected. Now we have Big Hero 6 the movie and while it strays away from the source material, the end result is a charming movie that has the perfect Disney mix or charm, humor, likeable characters and enough emotional impact to soften even the coldest of hearts.

Big Hero 6 follows a child engineering prodigy – Hiro Hamada, who despite his intelligence has no drive or passion in his life. Worried that Hiro is squandering his talent and is at risk of ruining his life, his older brother Tadashi takes him to San Fransokyo Tech to introduce him to the robotics department, its students and their legendary professor Robert Callaghan. With a newly recharged passion, Hiro decides that he absolutely needs to be a student at the school.

After creating an amazing series of “microbots,” (think sci-fi nanobots but a little bigger) as part of his showcase entry to gain admission into the school, a fire rocks the auditorium that the showcase is being held in, and Tadashi rushes inside to save his professor. The fire engulfs the entire building and both Tadashi and Calaghan are caught in it. Hiro falls into a deep depression following the loss of his brother, and sensing his distress, he is aided by his brother’s work in progress medical aid robot – Baymax.

Hiro discovers that his robots that were initially on display at the university were stolen instead of destroyed in the fire, so he sets off on an adventure that has him crossing paths with a myserious villain. Baymax is always following alongside, keeing Hiro safe from harm and trying his best to aid his new friend. Hiro and Baymax are later joined by some of Tadashi’s classmates as they form a super team to uncover the truth behind the fire, the stolen robots and a whole lot more.

Big Hero 6 is a super hero origin movie but more than that it is about a boy who has suffered a great tragedy and his new friend. Hiro and Baymax are without a doubt the focus of the movie here (often to the detriment of the other characters, who at times feel like they are nothing more than screen filler). Baymax is everything you would expect from a Disney side-kick; loving, caring and more than a little bumbling. His actions all feel kind, calm and hilarious which is made all the more impressive considering his face is made out of two circles and a line joining them.

One of the pivotal moments in the story involves Hiro and Baymax in what I will call a “Superman 2” moment. Without giving too much away, Hiro makes a decision that impacts not only himself, but Baymax and the entire team in a very negative way. However, when he is at his lowest point they are open to the greatest change and after seeing a series of video recordings of his brother, Hiro begins to understand what it takes to not only get over his brother’s death, but how to keep his spirit alive.

Big Hero 6’s story is a little cliché in this day and age, but there is enough to it to keep you enthralled and emotionally invested from beginning to end. The characters all get their time in the sun, and the film’s not to subtle message that relying on your friends during times of trouble is ok, is a brilliant one to teach children.

Visually, Big Hero 6 is a sight to behold. Disney have developed more than a few new tricks that they implement here that really make this film come to life more than anything else before it. The film uses a very similar 3d animation style to last year’s Frozen but takes the look and feel so much further.

The fictional San Fransokyo manages to capture the look and feel of both its very different muse-cities (Tokyo Japan, and San Francisco USA) while merging them into a cohesive whole. Not only that, but San Fransokyo is absolutely bustling with life. There may be more characters on screen than any movie I’ve ever seen before and at no point in the movie did I notice any two background characters that looked alike. The massive, unique background cast really helps this city feel alive and real.

Characters are all brightly coloured and have that signature look that makes Disney characters iconic for generations. The sci-fi/futuresque technological marvels that are present in the movie really help it stand out from other Disney properties and give it a life of its own.

The most impressive part of the animation however is the fact that audiences will fall in love with Baymax, despite the fact that he is nothing more than a giant marshmallow with two black dots for eyes. Although this is a joint success between the visuals, the story and the voice work.

The voice work in Big Hero 6 is really stellar and unlike many recent Disney Animation Studios pictures, isn’t filled with massive a-list celebrities. The fact that (aside from a couple characters) I was unable to pick where I had heard a voice before really helped me get absorbed into the experience all the more. Hiro and Baymax are voiced expertly by the dynamic duo of Ryan Potter and Scott Adsit, and together their friendly chemistry is outstanding. The most notable voice in the film is probably T. J Miller (famous for his appearance in Transformers: Age of Extinction, and Silicon Valley) who voices the comic-book loving Fred. Miller’s performance almost outshines the rest of the cast, and he sounds as thrilled to be a part of the team as his character is.

Big Hero 6 it the start of something really special for Disney. Not only does it show that they can adapt really obscure source material, but they have created a brand new world filled with colourful characters that will surely lighten our eyes for many years to come. The visual techniques used to bring Hiro, Baymax and the rest of the group of San Fransokyo to life are absolutely astounding and the emotional connection that they were able to create is nothing to scoff at. Although we are still about 6 weeks from getting this movie down under, it is one that you really need to have on your radar.