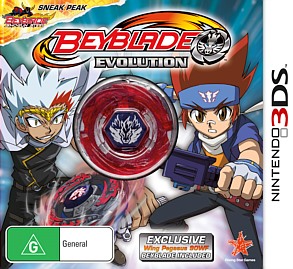 Overview
It’s time to fight an epic battle. To face off and spin the metal. Get ready to be thrown into the world of Beyblades. Start as an unknown and work your way up through the ranks, not stopping until you are the World Champion…or mess around and play some mini games…or both. Your call. Either way, it’s time to get a grip. Let it rip! 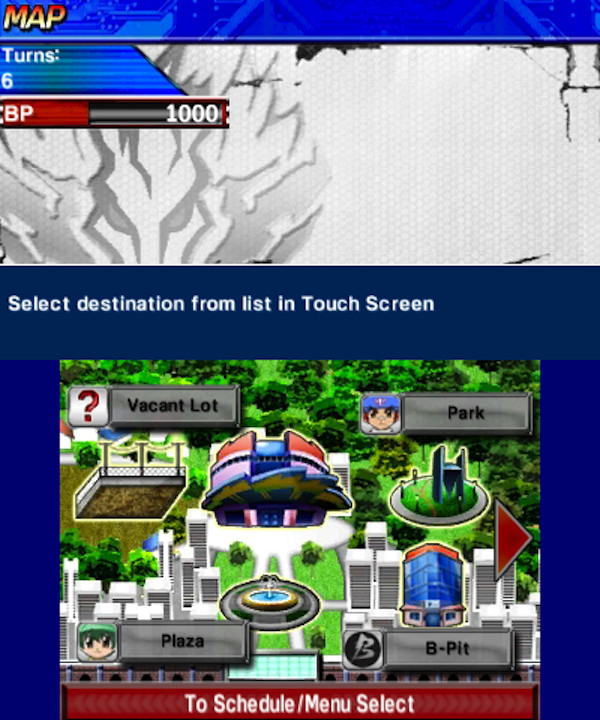 So much to do, so little time

Story
You are the player. An up and comer in the Beyblade world, you have dreams of victory and fame…I guess, it’s what the game is about at least.

As the game begins you are greeted by  series mainstay and announcer extraodinaire Blader DJ. Being the helpful guy he is, DJ explains to you how the Bey Tournaments work, along with how to unlock the option of participation. He urges you to meet new people and have fun in battles and minigames, hinting to you that the Park might be a good place to start.

Stumbling upon a fellow Bey enthusiast, you decide to test your metal in a good ‘ol fashioned Bey Battle. Win or lose, your new friends explain to you the basics of the Bey world, such as noting the various types of Bey and the best strategies for using them. After spending a short time learning the way of the Bey, you’ll notice that the Bey Stadium is open for business. Your first chance at a title. Taking whatever Bey you happen to have, you engage in a one-on-one style battle. Doing your best, you will either win or lose the tournament. Winning will net you some precious Bey Points (BP) to spend on some shiny new parts to add to your arsenal. Losing on the other hand will net you a pat on the back and some kind words…yippee. 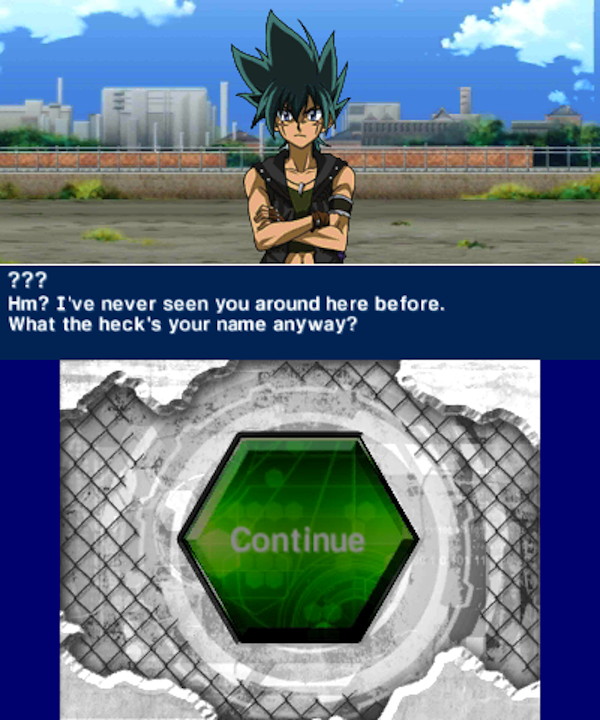 Herein lies the entirety of the Evolution story. Making your way through the side battles and minigames, you’ll progress to the point where you gain a chance at various titles of increasing importance. That being said, the game has no compunctions about eliminating you immediately. No try again, no game over, you simply lose and move on. Whilst the principle behind this is true to the series, you may find yourself five tournaments in before you manage to accrue enough points to build a good Bey…or one if you manage to win. So in the end, your Blading career will turn out as good as you can make it.

The Bey Story mode does however, provide you with a plethora of familiar faces. Rather than creating a cast of game only characters, every single opponent you face is taken straight out of the anime. In fact, your first opponent is none other than protagonist Gingka Hagane and his trademark Pegasus Bey. Being that the player was the only new addition, entering an already established world of characters, made the game feel like a piece of the series rather than an irrelevant side story. An additional Bey story, known as Zero-G Mode, adds characters from the new Shogun Steel series into the fray, throwing you into two different worlds. Oh the choices. 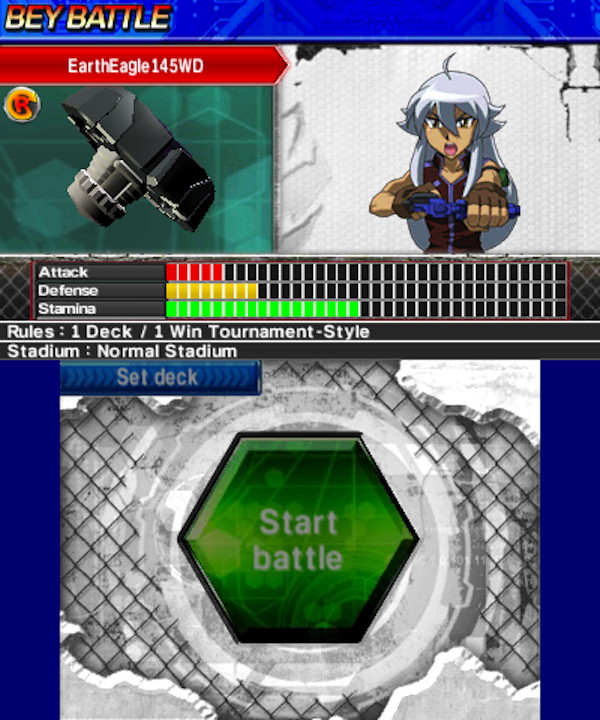 Gameplay
The name of the game is Beyblade. Ergo, you must prepare to spin. Let it rip as it were. Following the example of the actual, physical product you must launch your Bey by pulling back on your 3DS system just like you would a Launcher. Presented a view of the arena, you are also able to aim where you wish to fire your Bey. As explained early in the game, various types of Bey are best suited for different areas. Attack types should aim for the outer rim, Defence and Stamina types do best in the centre zone and Balance Beys belong somewhere in between.

During the heat of battle, you are able to imbue you Bey with a little extra fighting spirit. A gauge on the lower screen will express how much spirit you currently have stored, ranging from Level 1 to Level 3. Each level provides your Bey with a larger boost in Stamina, though you can choose whether to wait for a maxed out gauge or stagger the power over a number of shots. During some of the longer fights, imbuing additional spirit into your Bey becomes pretty useful, sometimes allowing you to scrape in a narrow victory. Aiming is based on timing as it is quite easy to miss your Bey and accidentally empower the enemy. Also, for some reason, the game doesn’t allow you to aim up or down during a fight, forcing you to wait for your Bey to make a circuit of the arena. 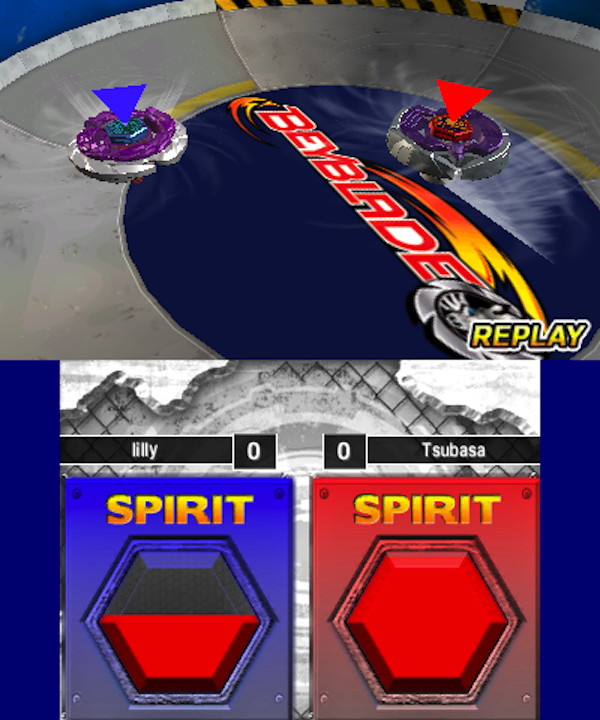 As you proceed, and win, you will acquire the currency of the land, dubbed BP points. These points allow you to visit the two stores of the game and purchase parts to upgrade your Bey, or create a new one entirely. This becomes more and more necessary as you progress and enemies become stronger. Certain tournaments also require you to enter three Beys, so money is very important…you know, like in the real world. Each individual part comes with its own values, lending more to one type of Bey, be it Attack, Defence or Stamina. It is up to you to chose the parts most useful to your style of play and combine them into a force to be reckoned with. You should also note that some pieces are incompatible with others, limiting your options somewhat.

In between your more traditional battles, you’ll find yourself with the option to partake in some Beyblade themed mini games. Though obviously revolving around a central theme, these games are actually pretty varied. One particular game has you launch a never ending supply of Beys at a series of rising balloons, the goal being to pop as many as you can. Also included is a parts quiz, a ring challenge and a maze to navigate. Each game can be played in Easy, Medium or Hard, so feel free to go at it at your own pace. 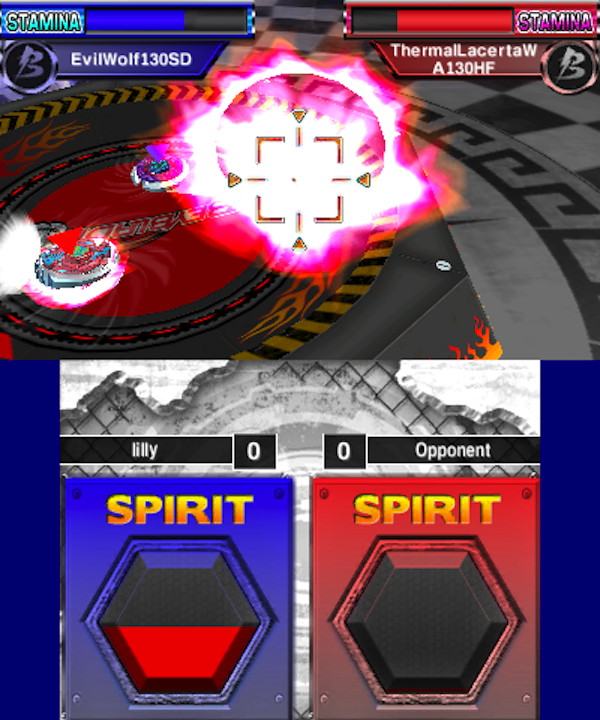 Visuals
Due to the fact that Battles occur between two Beys at a time, the visuals remain fairly simple during combat. The battles also receive quite a boost from the 3D function, adding a great deal of depth to the arena and improving the visuals overall. However, due to the control scheme of the game, you’ll often find yourself tilting the system and ruining the viewing angle…along with your eyes. The workaround for this would be to keep your head in line with the system’s movements, or forgo the feature entirely.

When in the overworld, each character is presented by a select few illustrations which depict them in various poses. Characters each posess their own launch image, letting you know they’re ready to fight, as well as a happy or sad picture depending on the outcome of the battle. 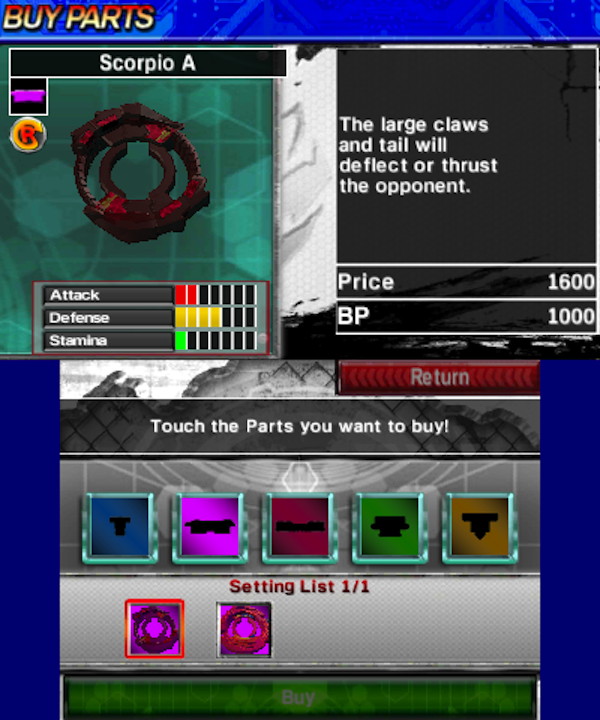 Audio
The soundtrack for Evolution features a fair deal of keyboard and guitar. You know, to set the mood. Overall, it has the qualities of some older DS audio, though not in a bad way. Regardless, it still sounds pretty funky and adds a nice touch to the battles.

Amidst the soundtrack, you can also hear the tremendous sound of two Beys as they clash on the battlefield…ok, so maybe it’s not as dramatic as all that. For some reason, the game goes for the more realistic approach and provides you with a fairly unsatisfying ‘click’ sound when two Beys collide. It’s just like real life. 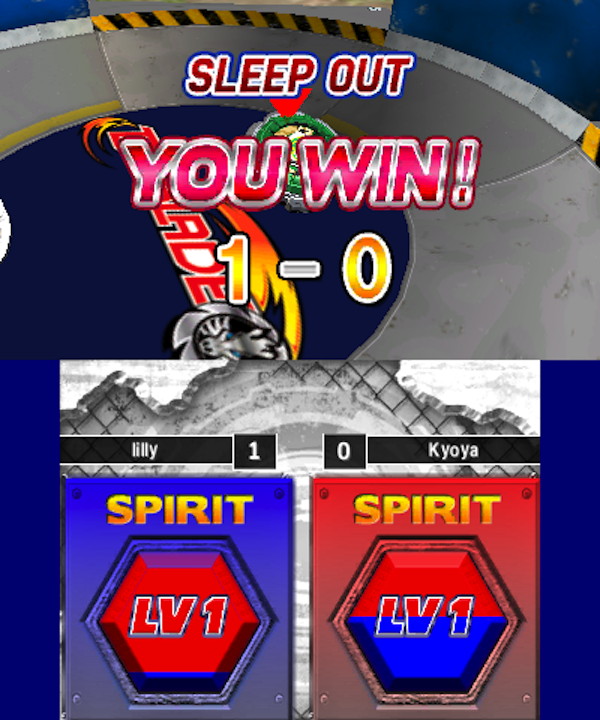 The aim of the game

Overall
Beyblade: Evolution is an alright game. It’s not particularly bad, it’s not particularly good. Being able to create your own Bey is pretty cool and there are definitely a large number of parts to choose from. That being said, the battles in which you use them are fairly luck based. Sometimes your strongest Bey will get thrown out of the ring immediately and other times your average Bey will cinch the victory. There is also no precedent for a tie, which occurs fairly frequently, resulting in random decisions should one come up. In the end, it’s definitely a game aimed at a younger audience, who I’m sure will enjoy it. Plus you also get a real life Bey of your own with the game, which is pretty cool…just have to find a Launcher for it.