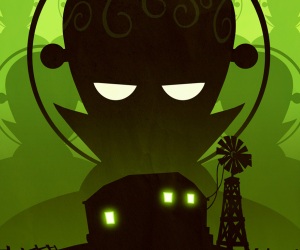 Another day in the gaming world of PCs, another tower defence game. Yes, the ever popular genre initiated mainly through Warcraft III mods, tower defence, has exploded into a fad that there’s just a bit too much of in the lives of us all, whether it’s on iPhone, PC, or even XBLA. Beware Planet Earth! seeks to charm its way into the hearts and minds of the cynical masses with a combination of the best features and mechanics to have hit the tower defence scene over the past decade and the never-ending charm of cartoon enemies. Is this an invasion worth resisting, or was the battle lost before it even began?

Aliens are invading!! Yes, they’re back, and they’re attacking the rural countryside. Naturally, to deprive our great countries of sustenance, they’re going after our cows, and it’s up to you and a cowardly mechanic to stop them. 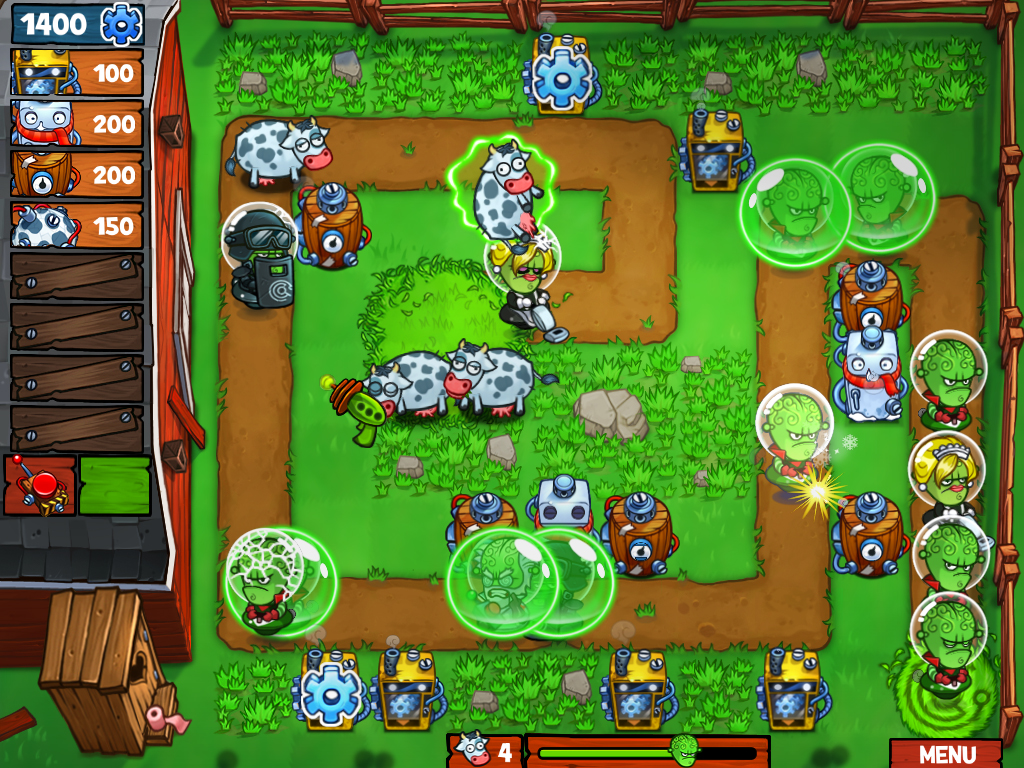 Beware Planet Earth! operates in much the same way as many traditional tower defence games: enemies spawn at a given location and follow a marked path to their destination, you must build towers to kill them before they get there. Where the game differs is that when the aliens get to the cow pen where their prey awaits they have to carry them back to their starting location.

Beware Planet Earth! also riffs several features rather shamelessly from Popcap’s Plants vs. Zombies. You’ll put down machines that generate cogs that you must click to collect and spend (much like the sunflowers in its zombie defence inspiration), you’ll have a wide arsenal of towers but be limited as to how many you can use per level, and there’s a crazy sidekick mechanic-guy who hides in an outhouse, providing you with upgrades and new towers, while also being the main way information about an upcoming challenge is presented to you. 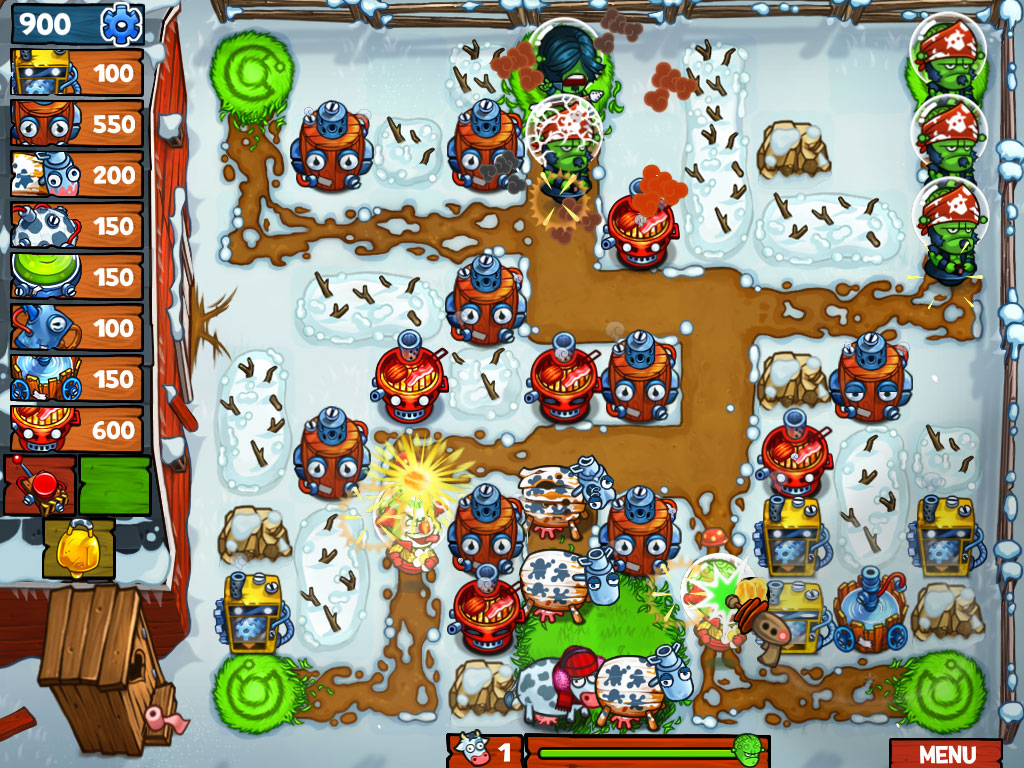 The variety of towers veterans have come to expect are all present and accounted for here: fridges will slow down opponents, bombs will instantly kill a cluster of aliens, and so on. The enemy types are where the game actually gets quite creative. There’s your typical fast and weak enemy type and there’s your slow but strong alien variety, but there’s also spy aliens that you have to actively “undisguise” so that your towers will shoot them, and scientist aliens who provide a forcefield to all those around them. The only way to counteract those enemies is to shoot at them with a ray gun that you acquire early on; the kicker is that if you spam the ability, the gun will overheat and you’ll have to wait for it to cooldown before you can use it again. 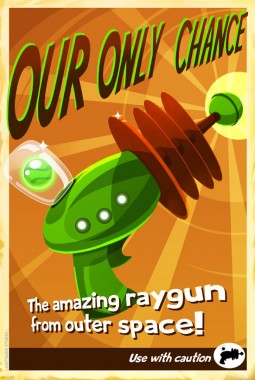 Despite the creativity put into the enemy types, Beware Planet Earth! quickly becomes repetitive. This isn’t due to a lack of new things to do, but rather the fact that despite the new challenges the game remains ridiculously easy. I very rarely had an alien even get to the cowpen, much less carry one of my bovine companions back to the starting point. That the aliens have to return the cows to the start was an odd decision in the first place, but it single-handedly manages to drag the game down from something that was potentially great.

Visually, the game looks very good. Its cartoon style once again seeks to emulate that of Plants vs. Zombies, and for the most part it succeeds. Your machines are all sentient and have eyeballs (god knows why), and the enemy aliens look like they’d belong on a cutesy for-two-year-olds horror toon. That said it does feel like there is something missing. Maybe it’s the lack of audio on the aliens (the groans on the zombies in PvZ as they fell to your plants always let you know you were doing well), or maybe it’s the fact that the aliens aren’t really well animated: they just kind of glide along the path with very little other than the glass on their helmets cracking to show you that they’re taking damage. 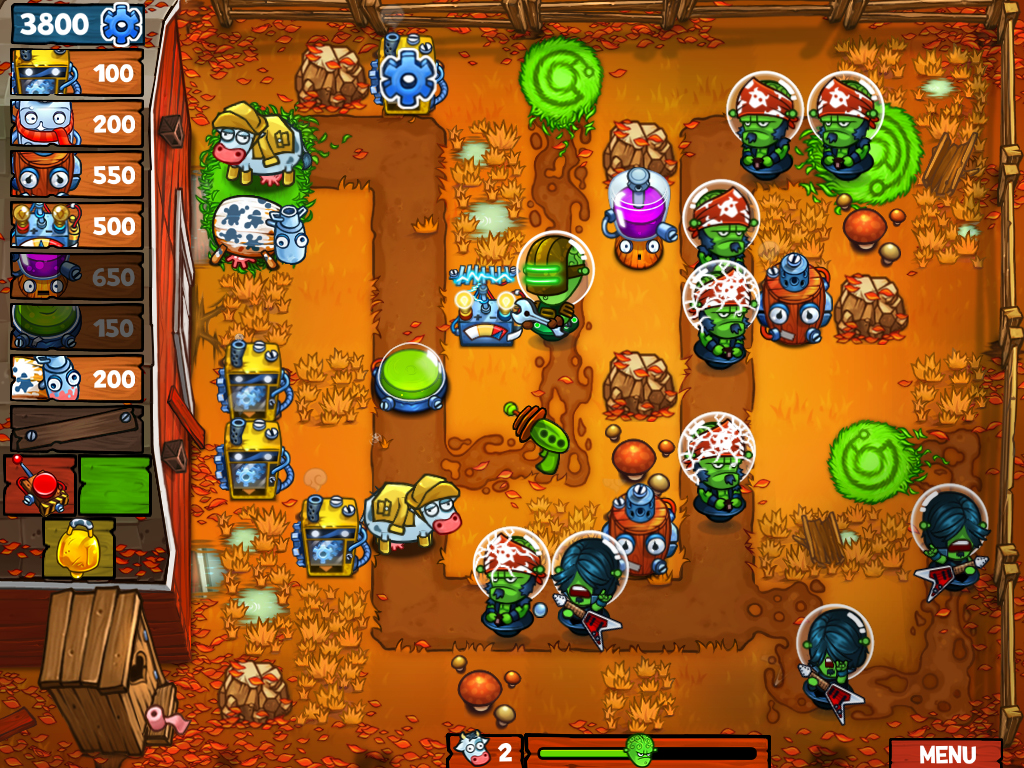 The audio fares better; not that it’s in any way spectacular, but it does the job well and the cheery music that plays when you finish a level (complete with a head-bobbing, winking cow) is definitely a little sound-enhanced pat on the back. The plops and clacks of your various machines attacking the aliens lack a little oompf, but you’ll probably stop noticing when your towers join together in a crescendo of pleepclackploop as a wave of aliens tries to get by.

Beware Planet Earth! is a game that on paper should be excellent. It features the best compilation of tower defence mechanics from the TD hits of the last ten years, but even though it ticks all the boxes on the list, a couple of missteps hold it back from true greatness. The ease with which waves of aliens are dispatched can make the game a droll affair, more about watching than playing. On top of that, there’s just a little polish missing in the overall presentation of the game. What should be a great tower defence game with a lot of character is bogged down by those flaws, making Beware Planet Earth a good game that will keep you interested, but not an amazing one that you’ll be talking about a couple of months from now.