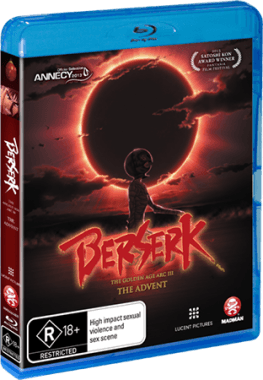 Overview
Berserk has long been considered a classic amongst old-timers in the anime sphere. Its hyper violent, no-holds barred approach to a European medieval setting made up for an anime which many fans claimed did not do justice to the source manga, a series that is still ongoing since 1990.

The Berserk Golden Age Arc trilogy has adapted one small portion of the manga and while the effort and cinematography was top notch for the first two films, poor pacing undermined what were otherwise great anime films in their own right. The Advent concludes this chapter of Berserk and it promises to be the most horrific anime film you will see this year. Well, I can confidently say it’s the most brilliantly horrific anime film we’ve seen in years. 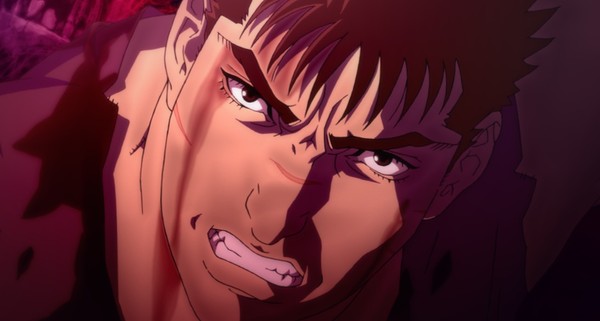 Story
The Battle for Doldrey concluded with the warrior Guts parting ways with the leader of the Band of the Hawk, Griffith, a man who was unusually obsessed with Guts. Their bond was truly special as Guts was the only person the pragmatic Griffith considered his equal, a real friend. Guts’ decision drove Griffith mad wh0 then bedded the princess of Midland out of frustration. This lead to his arrest by orders of the king he served and imprisonment where we are left with the final movie, The Advent.

One year has passed since the Band of the Hawk lost their leader, and the group has been doing everything it can to find Griffith while trying to avoid death and capture at the same time. During an ambush sprung by the kingdom, Guts reappears in time to save the Casca, Griffith’s right hand girl and devotee, and joins the Band of the Hawk to recover Griffith. The pacing at the beginning is unusually weak, probably the weakest part of the movie, and that’s a common side effect of condensing the manga into not just an anime, but an anime film. 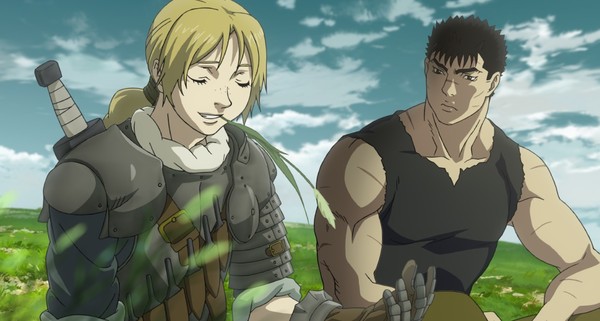 When they find Griffith, he’s not in an ideal state. After being tortured for over a year his tendons are cut, his skin burned and his tongue cut out. The once proud and beautiful man is reduced to useless skin and bone. Not only is his body ruined, but Griffith can now see Guts and Casca falling in love. For Griffith, who placed ambition over love and never saw his right hand sword as a love interest, this humiliation is too much to bear.

Griffith flees the camp in a spate of madness, foregoing his comrades and remembering his childhood ambition of wanting to rule his own kingdom. It’s when he is on the verge of suicide that he comes across the red “egg” that was always around his neck, lost and now found. As viewers of the movies, we have no idea what it actually is other than it being some supernatural relic. 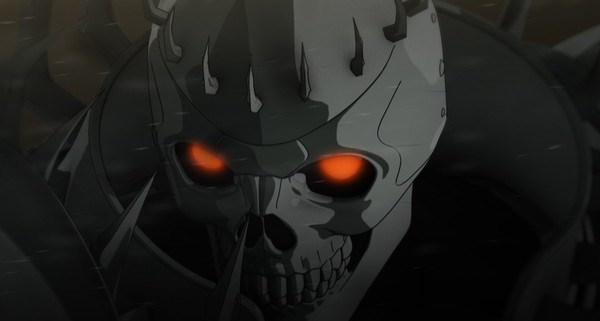 The second half of The Advent is where everything in this trilogy leads to. Without spoiling what exactly happens next, there are copious amounts of death, demons, blood and rape in a savage display of everything nasty that humans are capable of. You will be riveted seeing everything fall apart because of the ambitions of one man.

When you reach the end it’s clear that The Advent is less of a conclusion and more of a gateway to the next Berserk arc, an arc that’s far more sinister and otherworldly. I’m not sure whether it adapts the manga well as I’ve never read it, but the story and atmosphere in The Advent is the best out of the three films. The ending is masterfully done and you really feel the characters this time around. 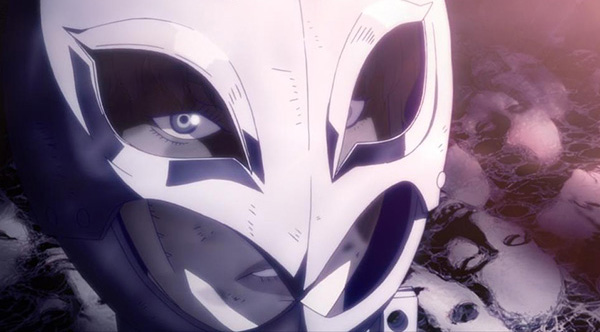 Visuals
The Advent maintains the same art style and visual quality of the previous movies in the trilogy. Whether or not you’re a fan of the CGI it still looks great despite the fact that Berserk would still be more at home in a gritty 2D anime style instead. The colour palette this time around is a lot darker to suit the madness that’s going on and red (blood) is probably the most used colour here.

The animation in the second half is particularly impressive when Hell and the Skull King come into the fore. It’s just awesome to look at despite the blood, guts and nudity. This is probably the most well-deserved R18+ rating I’ve seen for an anime and if you’re squeamish or easily offended, you’ve been warned. This movie is intense. 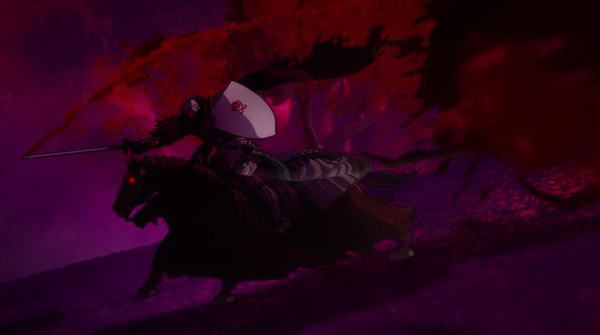 Audio
If you hate the CGI used in the Berserk films, at least the sound is good for everyone. The films use high quality sound effects fit and a great sound track composed by Shiro Sagisu (Rebuild of Evangelion). The theme song is still the same here; Aria by the incredible Hirasawa Susumu who sang Forces for the original anime, and it’s still an epic composition. The man’s voice is truly unique.

Extras
There are a suprising amount of extras included on the disc including interviews with the anime’s makers, art gallery, trailers, outtakes and best of all is a live performance of the theme song Aria. This is how all anime films should be released as often the price tag in Australia makes it an expensive 90 or so minutes. 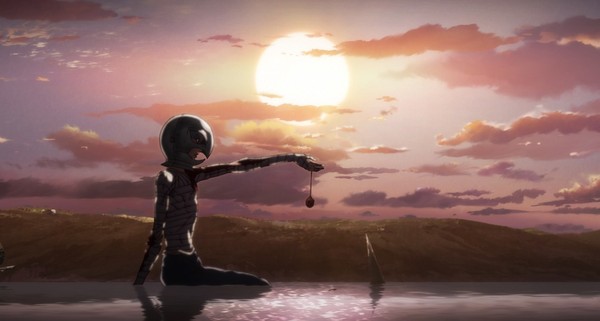 Overall
Whether or not the Berserk: Golden Age Arc trilogy is a good adaptation of the manga is debatable. It’s clear pacing is the biggest problem with this trilogy. But for viewers like myself who have never seen Berserk, these films were still a great watch and The Advent was both an incredibly shocking and a rewarding conclusion with plenty of promise for a follow up. The character development between Guts and Griffith was fascinating to see and The Advent delves into the worst of human nature.

For much of the first two films you’re left wondering where this is all going but the third film shows off what Berserk is truly all about. It had this reviewer scrambling for the manga to find out what happens next and one can only hope a new animation, preferably a proper anime series, is announced soon to continue what is a truly epic story.