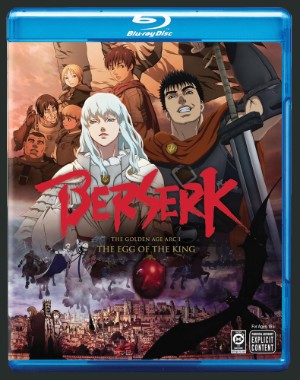 Overview:
Berserk is a a manga series going back more than 20 years best known for its level of violence and popular enough that it got an anime series back in 1997 thought was able to cover the entire arc up until that point.  But, as is often the case, anime can cover so much more ground in a such a short time that the original anime came to an end when it had caught up.  Now, after the manga has had many more chapters and covered much more ground it was considered time to go at it again with another adaptation to include the entire manga series, though albeit taking a different direction.  Instead of an anime series the approach this time is a set of movies, the first three covering The Golden Age Arc.  The first now being released in North America as Berserk: The Golden Age Arc 1: The Egg of the King.

Story:
Berserk is the story of Guts, a mercenary that fights seemingly for the sake of fighting, to the point of moving from group to group and never wanting to be caged by or belonging to anyone.  A far different opening than in the previous adaptation, the idea seeming to keep the story more linear than debuting him as The Black Swordsman, just to go back later, which makes sense both to ease new viewers unfamiliar with the manga or original series and because being formatted as a set of movies linearity is key.  After proving to be a truly skilled fighter, though incredibly reckless and badass, he is noted by the leader of the Band of the Hawk mercenaries, the ridiculously good looking Griffith, to the point of mistaking him for a woman on the cover. After being defeated by Griffith, Guts is resigned to what he hates most of becoming one of Griffith’s men being forced to be apart of the Band of the Hawk, which thankfully all being out of the way the story can actually get started.

Three years after Guts becomes a member of the Band of the Hawk, Guts himself is already a captain leading men himself.  While some think his methods rest solely with fighting alone to be a hero, its interesting to see that Guts true goal is to fight alone to protect his men, without specifically coming out and saying it.  A quality that the movie continues throughout, it shows more than tells, such as the opposite natures of Guts and Griffith.  Guts being the scarred reckless fighter using any means necessary to win and Griffith being the perfectly handsome skilled in honorable fighting, but no one is ever needed to come out and state it about the two bromancers.

Aside from Guts and Griffith, the rest of the characters seem for the most part to play a minor roles, with the only exception being Casca.  The mercenaries seem to have several interesting characters, but so far they exist as (barely) named and having no real role in the plot.  Casca though is played plenty important, consistently at odds against Guts and vying for a true place at the side of Griffith, she is (hopefully) set up to be far more important in the later movies and not just an excuse to show a woman naked.  The character of Guts, as main a character there is, leaves viewers wanting more, while there is a few brief glimpses into his past, it comes in a way that leaves more questions than answers for those that don’t already know it.  Something that would also be great to see better fleshed out later as well.

The story itself feels a little disjointed, with big battles and character moments, the plot itself progresses in large steps to make up for the limited time. After just introducing the princess to the king, the next scene is Griffith already trying to get closer to her and his enemies trying to get rid of him. While this doesn’t make the story hard to follow, it continually feels like maybe more time could have been spent in a number of places as with a run time of about 80 minutes there shouldn’t have been any issue with a bit better pacing with 20 more minutes. Though in a story that encompasses about episodes 2-10 of the series, it may be that they are condensing it down in hopes of focusing more when they get to the new material when they get there.  The closing of the movie leads directly to a trailer for the next part, though with the fast paced nature of the show it is hard to distinguish it as a trailer until the most of the way through it, perhaps being better placed after the credits to not distract from the final more dramatic moment.

Visuals:
The visuals for the movie come with a stark contrast, in action scenes the animation is 3D CGI, while in every other scene is utilizes standard animation.  The reasons for this probably comes down to the CGI being cheaper or easier to use for battle scenes as character assets only need to be created once and then animated, but it is a terrible distraction when trying to enjoy the movie.  In later scenes, while using the standard animation, the change between them is done well enough that the change isn’t initially realized instead taking it as growing accustomed to the style, at least until the next big battle and the distraction returns.

In a story known for its violence, the level of blood and gore does go pretty high, from limbs being cut off and people suffering incredibly deep wounds, so it does deserve its explicit content label, putting aside the one and a half scenes involving Casca being naked.  Seeing it on Blu-ray the level of detail is amazing, from distinguishing the individual stones on a castle to other excessive detail on the beautiful backgrounds.  The only unfortunate thing being that that level of detail is mainly for the backgrounds, so characters don’t benefit as much from the high definition.

Audio:
Thankfully, the music in the movie is far improved from the incredible Engrish that marked the opening and closing themes of the anime, instead going with an actual orchestra.  With a high quality score that uses a wide variety of instruments to set the mood of scenes, there is a better emotional depth to the music as well.  Its good to see that they’re embracing the movie format fully and not trying to hybrid the feel of a movie and series, even with the arc format they are using for these movies.  The voice acting is well done by both casts and with only minor differences in translation, such as the “devil’s luck” of Griffith’s behelit.  Griffith’s voice is masculine enough to counter any confusion, despite how attractive his character is designed as, without feeling out of place either.  In short, the audio plays a good job somewhat rounding out the problems of the distracting visuals.

Extras:
For a first release of a set of movies, it is understandable that there be a bit of a limit to the extras included, but to  only have two is very limited.  The first extra is a trailer for Viz Media’s Neon Alley service, showing off a lot of their series’ that are popular.  The other extra is a gallery showing off drawings of different characters and locations for The Egg of the King.  Mainly just sketches, the gallery has the different major characters most likely used as a reference for the CGI animation.  The most interesting piece probably being the height comparisons for the major characters, with Guts being the base.  While not a lot of content, hopefully there is more and better extras for the remaining movies.

Overall:
Berserk: The Golden Age Arc 1: The Egg of the King isn’t an outstanding movie or adaptation of the manga series, but it is at least a step in the right direction.  While suffering from distracting CGI in the action sequences, the standard animation is amazing and beautifully done, that only if utilized for the whole movie could have made for a consistently better end result.  The music is great and far more appealing than that of the anime series, though lacking in stand out pieces where  the original anime opening was at least memorable.  While not a knock out, it is at least a good set up for what is to come.