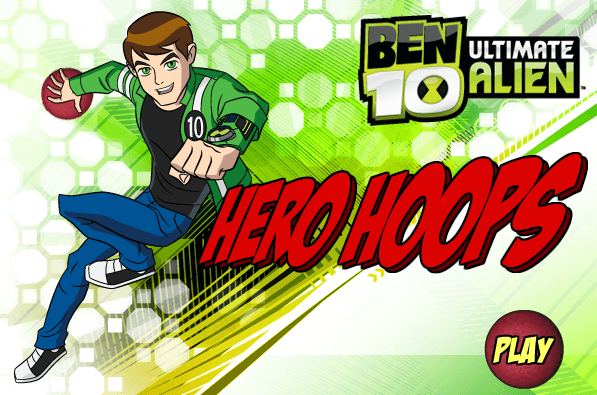 Ben 10 is an extremely strong and popular franchise, and in some instances the name may be attached to things without any true reason apart from gaining popularity or attention that it would not otherwise get. So, is Hero Hoops guilty of this?

Hero Hoops is a standard flash game, with a simple goal and a count down (which is reminiscent of a health bar, rather than an actual count down). Your goal is to shoot hoops, with three different rows of hoops moving above you, in a sort of ‘duck shoot’ style that you’d expect from a carnival. There are a variety of hoops, which can give you anything from points to certain bonuses that can help you out such as slow motion, giving you extra time, or increasing the hoop size. The colour of the hoops also affects how many points you get, but the higher pointed hoops appear what seems as commonly as others, and it doesn’t affect the placing of the hoops either. 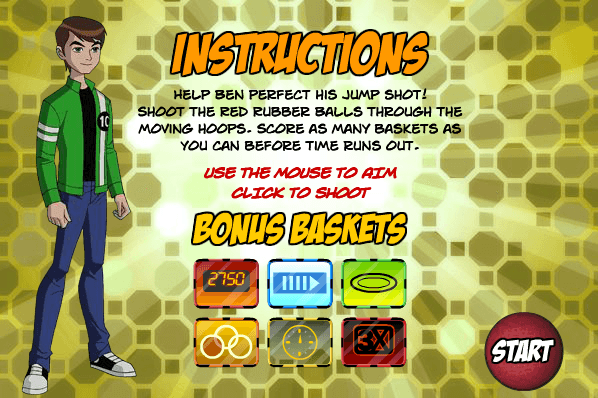 The gameplay is utterly simple, with a point and click shooting system. As per usual, it will take some judgment on your part in terms of where and when to aim for certain hoops, even though you are given a crosshair to aim with (which is very unsports-like, and definitely adds to the ‘duck shoot’ feel of the game). As you continue playing, if you are good enough with your timing then you can even do combos with the ball falling through two, or three, hoops in one go. 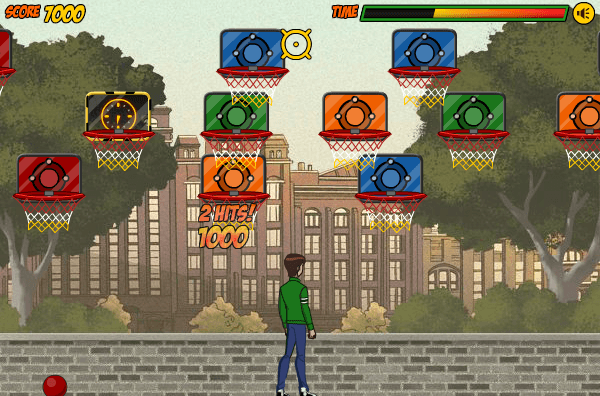 The time will last a while, especially if you get the bonus time hoops, and to be honest the game doesn’t actually pressure you that much to try and get points, it all feels fairly relaxed and you may even forget that you’re being timed at all. You will probably start feeling the time a little more if you’re aiming to get some badges for your Cartoon Network account, which you can compare with friends. These badges include getting a three basket combo, getting ten baskets without missing, getting fifty baskets in a single game, or scoring 10,000 or 100,000 points. 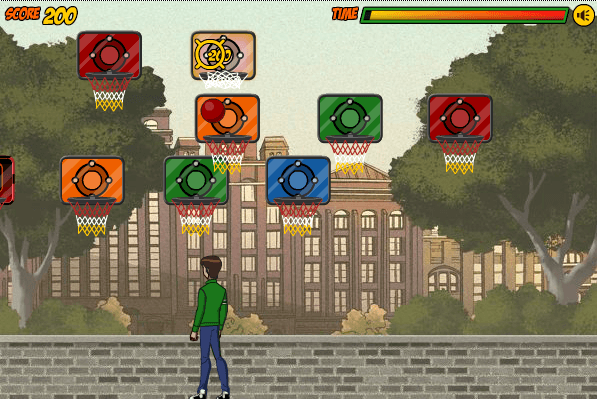 Hero Hoops doesn’t have any of the other Ben 10 characters; it’s a very quick sort of flash game that gets you addicted to it but doesn’t have any real depth to it. And in this the game itself doesn’t have much to do with Ben 10, or the franchise, apart from having Ben as the shooter that you control. So if you’re after a game that has any real tie to Ben 10 then this may not be the right game, although it definitely is entertaining and can be something that you waste quite a bit of time on. 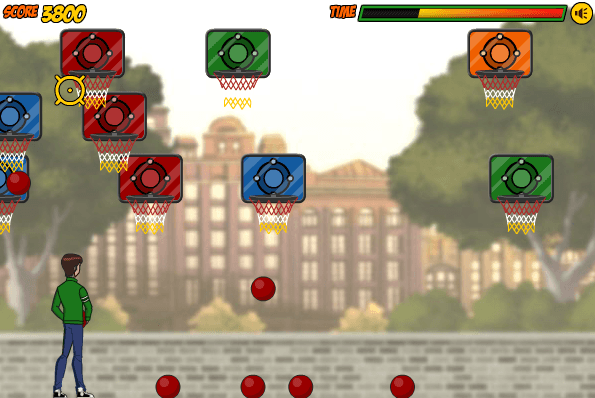 With all of the bonuses, and the commonness of the hoops, it won’t be difficult to get a fairly high score in the game, so don’t be surprised if your score skyrockets a bit. It certainly does well for your ego, but if you’re after a challenge you’ll most likely get that if you start comparing to other’s scores, or aiming for combos. Otherwise you might find that the game loses your interest because there isn’t much challenge to it.

The game is quite simple looking, without too many flashy things. It’s unsurprising given that there are only three graphic aspects to the game, Ben, the balls, and the hoops. The game is rather simplistic, and apart from Ben’s avatar I can’t see anything else that ties it to the franchise.

The soundtrack is fairly repetitive, with a certain arcade feel to it. It will keep your energy up while you’re playing but you may also find that it gets on your nerves after a while. Still, this stereotypical soundtrack comes as no surprise.

Ben 10: Ultimate Alien Hero Hoops has almost nothing to do with Ben 10, apart from having your avatar be Ben. So if you’re after a game that does the show justice, this won’t be it, but that’s not to take anything away from game itself. It is one of those utterly addictive games that you can play regularly without getting sick of it, because the concept is so simple that you’re just in a constant state of improvement.

It’s a refurbishment of an old formula, but that doesn’t mean that it isn’t enjoyable. It certainly is an easy way to while away the hours and if you’re the type who loves to challenge yourself then this game will be right up your alley.