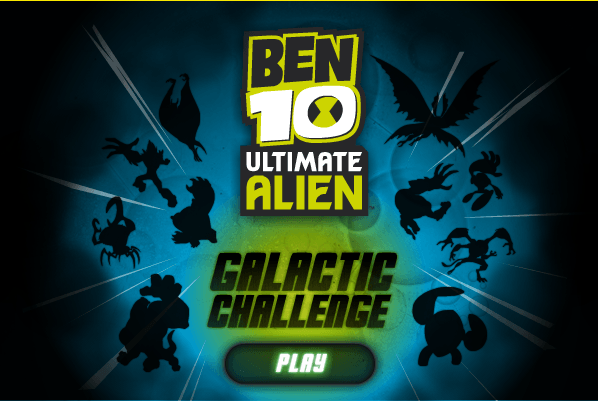 Overview
Ben 10: Destroy all Aliens is a movie based on the popular cartoon series.  It was released in March of this year. However, Cartoon Network’s website also hosts a game that ties into the movie.  The name of the game is:  Ben 10 Ultimate Alien – Galactic Challenge.  The backstory to Destroy all Aliens  is this:

“Ten-year-old Ben Tennyson is finally back from his summer vacation… and his life is mess! Humiliated by his teacher, harassed by bullies, grounded by his parents, upstaged by his cousin, and cursed with a malfunctioning Omnitrix that’s vaporizing his homework, Ben finally gets the opportunity to “get away from it all” when his alien buddy TETRAX offers him the chance of a lifetime: to step up his Omnitrix hero training with a “total alien emersion program” on the far side of the galaxy. But what Ben comes to realize is that “total alien immersion” means he can’t turn human again! Crashing back to Earth and stuck in his alien forms, Ben soon encounters a deadly Mechamorph– just like Ben’s Upgrade alien, but armed with explosive high-tech armor and a single-minded goal to DESTROY ALL ALIENS! As Grandpa Max, Gwen and Tetrax race to track him down, Ben’s battle with the Mechamorph takes them to the Omniverse– a strange world that exists within the Omnitrix itself – and a deadly battle with an evil version of Ben’s most powerful alien of all: the hundred-foot-tall Way Big! But little does Ben know that neither the Mechamorph nor the Evil Way Big are exactly what they seem!” (CartoonNetwork.com)

The game doesn’t really explain the story, except in the the text box below the game itself.  All in all, the game doesn’t really explain anything about what is going on, so it is helpful to either read the text above that was copied from Cartoon Network’s site, or to already have a deep knowledge of the universe by watching the movie and TV show. Since the game itself doesn’t have a story attached to it, I will start this review with the gameplay section. 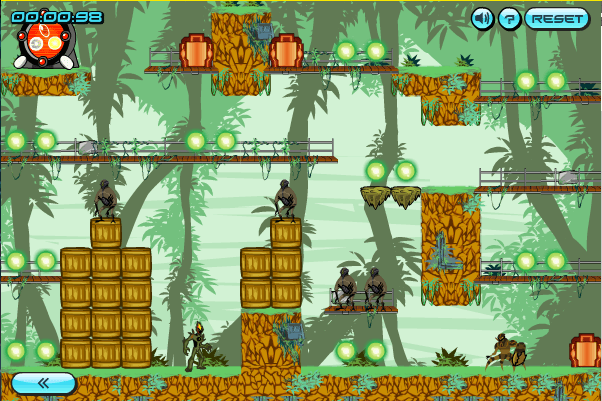 Gameplay
When the game loads, you are asked to choose what alien you wish to play as.  At first, you can only pick one: an alien that shoots fireballs.  However, after you finish this level, you can then choose to either replay the level with the same character, or you can choose a new character that has been unlocked.  In all, there are about 10 aliens to be unlocked and each alien has their own unique level. These levels are all played on the Easy difficulty.  Most of them require that you merely collect all the Orbs in the area, or that you attack each enemy.  However, each alien also has a Hard level. The hard levels usually have two objectives, like killing the enemies and collecting all the Orbs.  Getting shot by an enemy,  falling in a pit, or just touching one of the bad guys will instantly reset progress in each aliens respective level and you’ll have to restart. However, each level is really short, and it usually only takes about 5-10 minutes to beat each level. Hence, in total, the entire game can be beat in about 2 hours, and there is no real reason to go back and play it again.

Nevertheless, some of the aliens do have really cool powers and each one of them is fun to master.  One of them can hover, which is really neat, while a different alien can shoot energy out his hands. However, the energy is shot out in an arching pattern, meaning that you have to use some trial and error trigonometry to effectively use his power. It was great figuring out how to master each alien and using their different powers.  However, since you can only use their powers for about 20 minutes while your beating the 2 levels that each one has, its over disappointingly fast. 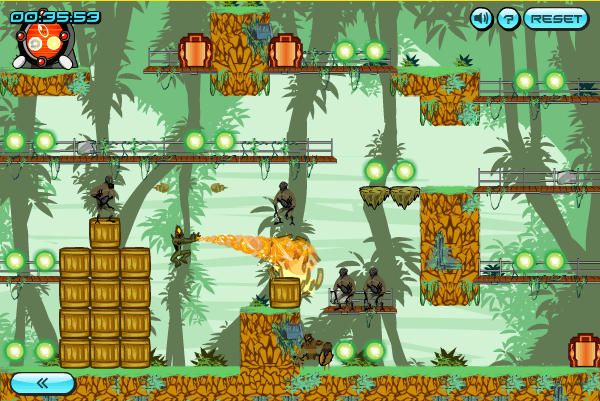 Cartoon Network also included a variety of badges, or achievements, that you can unlock while your playing the game. If you sign up for the site, you’ll be able to save them.  There are maybe 10-20 badges that you can earn. Other games on the site also have badges.  So, if you play a plethora of games on CartoonNetwork.com, its probably worth it to sign up so that you can display your prowess in all your games. If you don’t sign up, then you don’t earn any badges.  In addition, joining the site also gives you the ability to save your games.

One interesting idea that Cartoon Network had is that you can build your own levels.  The website guides you through 6 stages of picking your background scene, choosing a character, building a level, testing it out, etc.  You must be able to beat the level yourself before you can submit it to Cartoon Network.  Once its submitted, you can share the level with the entire world.  This adds some re-playability to the game, but the toolset in the Creator is incredibly limited and basic.  In addition, just finding the game creator was a nightmare.  In the main game, it mentions that you can create your own levels, but it doesn’t link off to anywhere.  I literally had to hunt this Creation mode down through a variety of website portals before I found it. 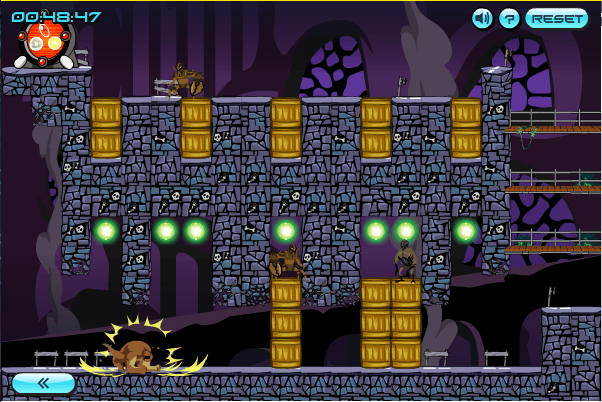 Audio and Visuals
The audio in Destroy all Aliens is not enjoyable. While each alien does have their own musical theme to go along with their level, it is all based on the same generic cartoony music.  It contrasts with the alien motif and it made my ears ring in agony.  The sound effects are also incredibly dull.

I was surprised that the visuals in this game were as good they were.  Each level has a detailed scene behind it and all the enemies, aliens and other pieces of the game were nice to look at.  This isn’t an AAA title or anything, but for a simple Flash game, the fine graphics were a treat to behold. 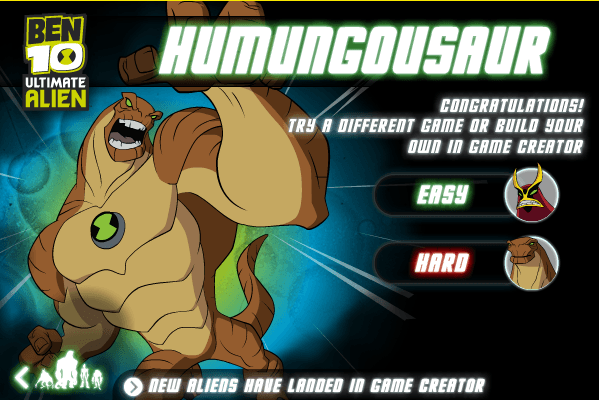 Overall
In conclusion, this game was built was for the hardcore fans of the series, mostly kids in the 6-12 age range. Undoubtedly, they will enjoy playing as their favorite alien from the movie and they will love smashing the enemies out of existence.  If they play the other Ben 10 games on the website, that will make the experience even more cohesive.  Even people not into the Ben 10 universe might enjoy spending their lunch break playing the game.  All in all, this is a free game that will surely delight fans of the series and draw them even further into the Ben 10 mythos.  But, its a good thing this game is free as there is no way  anyone should spend any money on it.