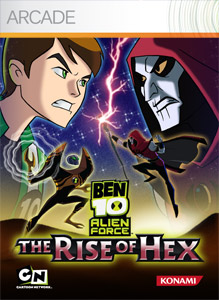 Story
“Ben 10 Alien Force: The Rise of Hex follows Ben Tennyson as he finds himself in the middle of Hex’s villainous plan to control the Earth. Utilizing the powers of the Omnitrix, transform Ben into ten different alien forms including Big Chill, Spider Monkey, and for the first time ever, Lodestar, as he battles Hex and his minions. Choose from 10 different aliens to platform your way through 15 levels completing puzzle challenges along the way. Fight through menacing villains and bosses in Ben’s newest adventure. Experience the world of Ben 10 Alien Force with 3-D characters set in a vibrant, 2-D styled environment.” [Via Xbox.com]

Kevin and Gwen have been taken by Hex and it is up to you to use the powers of the Omnitrix to stop him. There isn’t much of a story present in the game. You go through the levels to get to hex and beat him. My younger brother, who watches the show, says the game relates pretty well to the actual show and he was able to understand what was going on in the game better than I could. The story of the game seems to heavily rely on you watching the show in order to understand what is going on which alienates any newcomers. 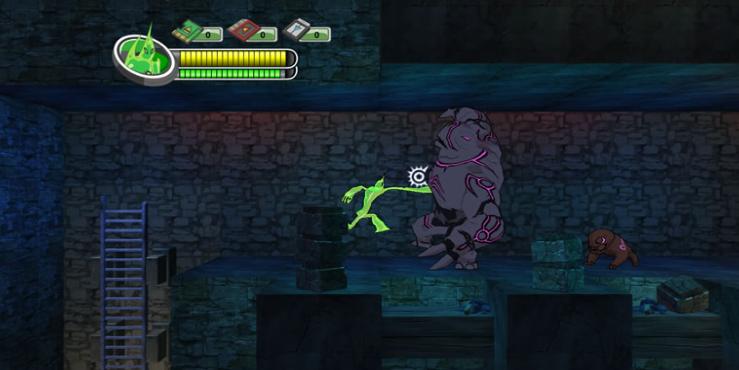 As you progress through the levels you will also run into monsters on the way. The combat in the game lacks luster; however, and attacks are slow and clunky. The enemies are pretty much all the same and just require button mashing to destroy. There a few that can fly and others that shoot lasers. Like I said; however, combat is slow and clunky and you can pretty much kill any enemy before they are even able to attack you.

There are multiple modes located in the game, which extend the game in length slightly. Survival mode, time attack, and multiple difficulty modes help a bit, but the game is short anyway. Survival mode has one stage and just keeps throwing enemies at you, but due to the clunky combat it becomes boring. Time Attack lets you replay all the levels in the game and post your best time on the leaderboard. The difficulty modes don’t change much other than the health of the enemies and the damage they cause, which just becomes tedious due to the clunky combat.

Audio & Graphics
The Audio in Ben 10: The Rise of Hex is extremely repetitive and only includes a few small music tracks that continually loop as you progress through the level. It isn’t as bad when you first hear a new song but you listen to each song loop so many times that you become grateful when a new song pokes its head out to play. The graphics are also nothing to be amazed at, a majority of the levels take place underground as you progress through buildings, caves and catacombs in search of Hex. A little bit of sunlight would’ve helped, but even the outdoor stages had rain and stormy weather. 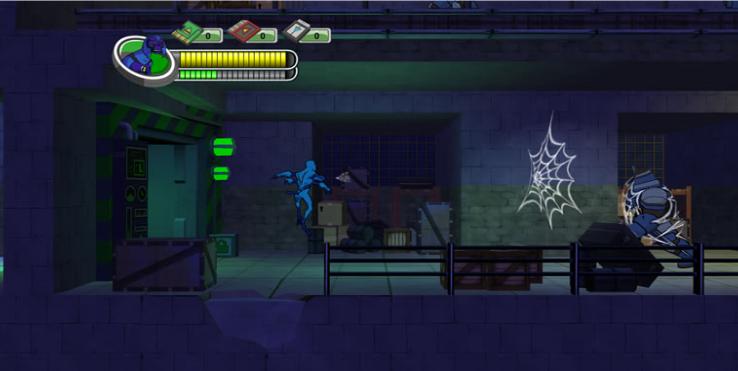 Achievements
The achievements in Ben 10: The Rise of Hex are straight forward and easy. Overall the achievement list has a very nice mix of tasks which shouldn’t be too difficult to anyone. The hardest one is “All Powered Up” because it is kind of hard to find all the extenders, but while working towards that achievement the rest should unlock.

Overview
Ben 10: The Rise of Hex is a platformer with an interesting concept. Change between multiple aliens to pass the level and each level has multiple routes depending on your strategy and the aliens you have available. The only problem with the game is the slow combat and the fact that the game relies too heavily on you watching the actual show. I enjoyed playing the game but had absolutely no idea what was going on and who I was saving. My little brother tried to fill me in on the details that he understood from watching the show, but the game just didn’t have the same feel it could have had if I had seen the show. Ben 10: The Rise of Hex is a game that a fan of the show will enjoy playing but sadly there are just too many problems with it to enjoy it to the fullest, if you don’t watch the show.
I give Ben 10: The Rise of Hex