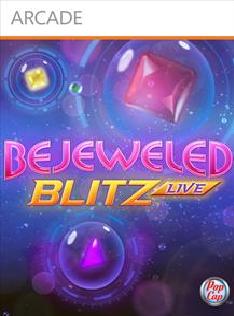 PopCap have came a long way with the Bejeweled series as a whole with many different sequels and spin-offs for the series, spanning both the PC and console marketplace alike. Since it’s original release on Facebook a while back, Bejeweled Blitz has became a staple in puzzle genre itself with it’s own success and now looks to bring the intense gem-swapping madness to the Xbox Live Arcade with Bejeweled Blitz LIVE. Not a lot has changed with this new version, but there is still plenty buried under this classic title that makes it an excellent addition to the Xbox Live Arcade’s library. So without further ado, here is my review for Bejeweled Blitz LIVE!

Gameplay
By now I would imagine that most of you should by now know how the formula for Bejeweled works. Swap 3 gems, cause them to break, more fall down, and then you reap your reward of points depending on how many gems you smash as well as the avalanche of combos caused along the way. This same formula is at the very forefront of Bejeweled Blitz LIVE throughout the whole game, and there is nothing wrong with that at all as this title is still as addictive as ever. 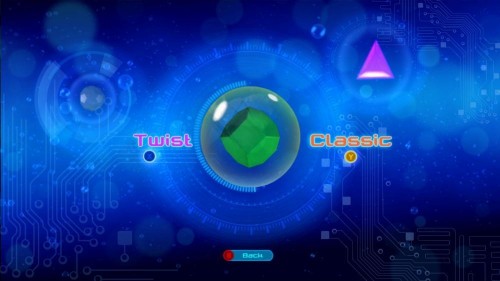 In Bejeweled Blitz LIVE, there are a couple of modes to choose from, but none in my opinion are as fun as the classic mode. Classic mode is pretty much the same game many of you might have played on Facebook, where you only have sixty seconds to smash and swap as many gems as possible, with the goal to rack up points and top your high score. Many familiar power-ups are also rewarded, so if you hit four gems at once, you then get a much stronger block known as a “power gem” that can blow up the surrounding pieces as well as the infamous hypercubes and multiplier gems which can be rewarded for performing other various swaps. If this sounds more of the same, you would be correct as the whole game plays nearly identical to the original title.

In this version, the main difference can be found in the controls. For those worried that the transfer from the point and click method of play to the Xbox 360 controller might come off as awkward, fear not as PopCap have perfectly ported the controls to the Xbox 360 controller without any issues. Using the analog to move your cursor and the face buttons to perform swaps is done both smoothly and effectively, which was great to see considering how intense each sixty second round ends up being. 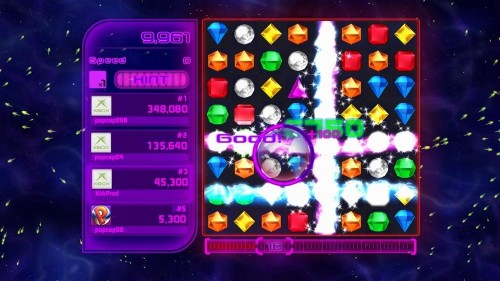 The sixty second timer is truly the key behind what makes Blitz stand out in PopCap’s Bejeweled franchise, and for good reason. Each round must be thought out if you want to have a chance at making a top score. With random gems appearing with each new game, it can make things a bit difficult to plan for but that is what makes Blitz so addictive. You must quickly come up with a strategy to make the biggest combo possible. This on your toes method also rewards those who think ahead with a “last hoorah” that will have all of your powered up gems and multipliers explode at the end of a round leading to a ton of points, so sometimes it just comes down to quick thinking and perfect placement.

For those who might want to mix things up a bit more, Bejeweled Twist is also available from the start. Twist plays differently than the classic Blitz though, as instead of swapping vertically and horizontally, players must control a cursor that covers a square of four gems, rotating the pieces until a match 3 combination is found. Twist may be different, but it still packs the same timed madness as it’s cousin which makes it just as addictive and a great change of pace.

Online leaderboards are also a welcome addition as they truly do give the player something to shoot for at all times, putting you against all of your friends’ scores in both modes. Normally I really don’t pay much attention to leaderboards, but just like the Facebook version of this title, I found myself spending hours just to remain at the top spot for bragging rights alone. 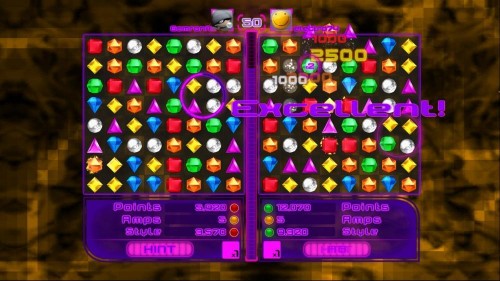 Multiplayer
If there is anything that can make an already addictive title even more addictive, it is competition. PopCap have accomplished this well with how multiplayer was integrated into Blitz LIVE. For those who just want a standard local match-up, the local duel mode is a great way to compete to swap gems quickly with some friends. The online however is a product of it’s own as there is quite a bit of variation mixed in. Standard duels can be found, putting you up against a random player in quick match (or by invite). If you have a lot of friends on at once or create a lobby, up to sixteen players can go at it for a minute straight with icons shown during the match on the side to show score progression. Winning one of these matches is highly rewarding and the whole concept is pulled off well as fighting for that top spot is a true test of skill. Both Twist and Classic can be chosen for any multiplayer match so mastering both can be something else to aim for if you want to proudly boast yourself as king (or queen) of Bejeweled Blitz Live. 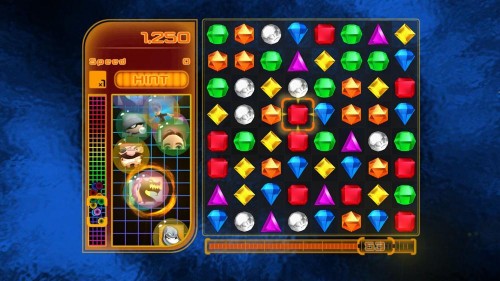 Graphics/Audio
As far as the visuals go, Bejeweled Blitz LIVE really doesn’t have any distinct changes from the many other incarnations we have seen on the Xbox 360. By no means though is that a bad thing, as each gem still is loaded with glisten and shine and every board has a somewhat animated backdrop which lets you fully immerse yourself in the game with ease. Menus however are a bit on the generic side, but since they do not effect how the game is actually played, this can be put off as more of an afterthought.

The same thing can be said when it comes to the tunes in this title. Each get the job done, and while not quite memorable, they do fit perfectly with the hectic gameplay. There is however a female announcers voice which will chime in during certain points, adding intensity to rounds with warnings for time and cheering you on for combos. Altogether, both the sound and the visuals make Blitz LIVE feel as it should with quite a bit of stylized flare and eye candy mixed in, creating yet another Bejeweled experience fans of the series should expect.

Overall
While I was playing Bejeweled Blitz LIVE, I tried to put the controller down, I honestly did, but that same addictive formula is always there to suck you back in every time. That is what is great about Blitz though. It takes the age old swap-3 formula, speeds it up, and then adds in the demand of the leaderboards to keep you competing and playing. I also believe that the multiplayer mode is one of the most complex we have seen for a puzzler to date on the Xbox Live Arcade as of now due to the 16 player matches which was a fantastic addition to the series. If you are looking for a great puzzler that is great to jump in and out of with solid gameplay that can lead to hours (or even whole nights like myself) of pure joy, look no further than this “gem” on the XBLA.

I Give Bejeweled Blitz LIVE: