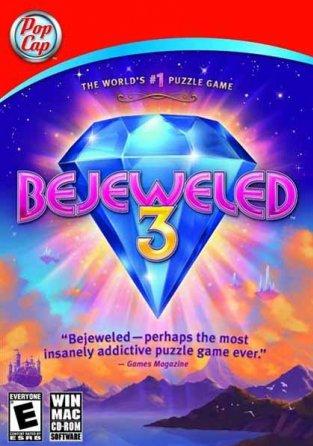 For nearly a decade, Bejeweled and it’s many incarnations and spin-offs have kept us distracted from our work with it’s addictive yet simple swap-3 gameplay. Bejeweled 3 is the third in installment of the series which as a whole has already sold over 50 million copies, a number that is still growing as you are reading this. Bejeweled 3 brings new modes as well as a nice coat of HD shine to the gems we all know and love while providing a sometimes hectic yet relaxing experience yet again. So how does this new title do? Here is my review for Bejeweled 3. 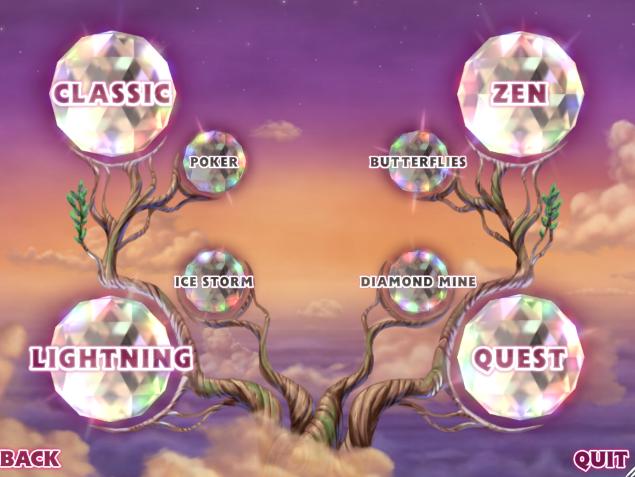 Modes & Gameplay
I know Bejeweled has received many different entries into the series such as Bejeweled Blitz and Twist over the past few years, but Bejeweled 3 returns to the series roots with the old-fashioned swap 3 gameplay we all know and love. Now that doesn’t mean that Bejeweled 3 doesn’t bring anything new to the table as I assure you there is plenty to discover in this game that will feed your gem bashing fix for eternity if you let it. So let’s start breaking down these modes, shall we? 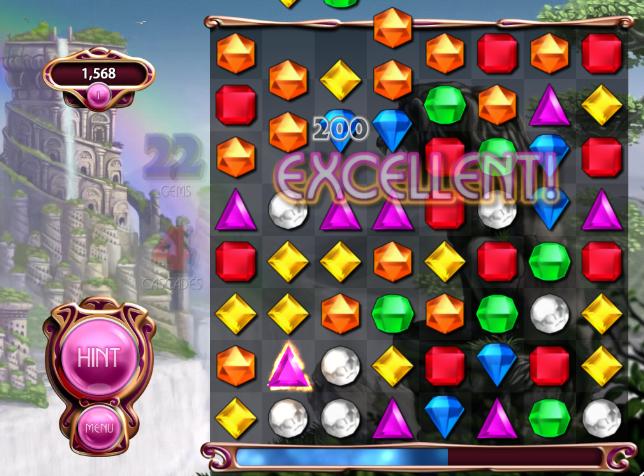 Classic Mode
Ah yes, Classic Bejeweled. This comes as advertised and is just the classic game of Bejeweled wrapped up in this pretty new package. Swap-3 gems, create combos and try to rack up a high score to precede to the next level, gain a high score and start over when you are out of moves. I think most of you know the drill. Simplicity at it’s finest. I honestly am lucky I was able to finally able to pull myself away from this mode to try the others in the game if that shows you how addictive Bejeweled really is. 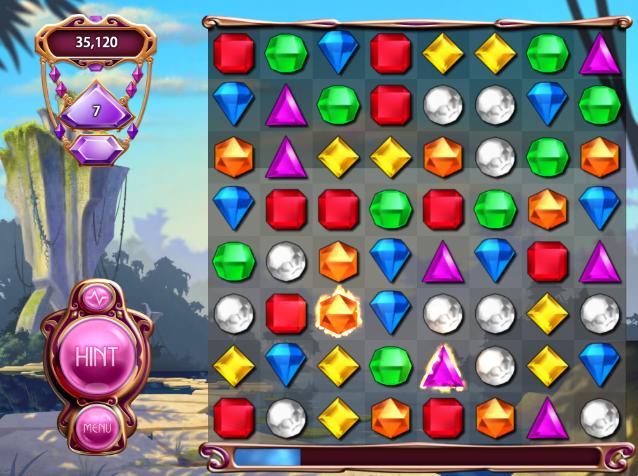 Zen Mode
One of the best things about Bejeweled is how relaxing the gameplay can be, and of course the people at PopCap know this and created an even better Zen Mode which may be one of the best features in the game. Zen Mode takes the classic formula for Bejeweled and uses different settings to create a complete atmospheric experience which can work wonders on the nerves.

All settings are optional and can be adjusted to best fit how you want to feel or what can best make you relax. Your grid’s background will fill up and down providing a visual on how deep to breathe as you play as well as music and ambient noses which can also be turned on and off. Some sounds include things like rainy leaves, sounds of waves crashing on a beach and crickets chirping just to name a few. As well as the sounds and music, an option is also available for encouraging text to appear which are more like messages of motivation. It is quite a nice feeling and a boost of self-confidence to have these mixed into the experience so that was just another great addition.

If you haven’t been bought yet by this mode, the most interesting feature to the Zen Mode experience are binaural beats which if you have headphones on can trigger parts of the brain and relieve stress. I found it interesting that a warning was given before I tried these out, but they actually do seem to work and can really put you in a relaxing trance but I imagine results may vary for everyone. For a puzzle game to actually have all this in just one mode made Zen Mode alone worth the price of admission as I found it somewhat therapeutic to play with all of these elements turned on. 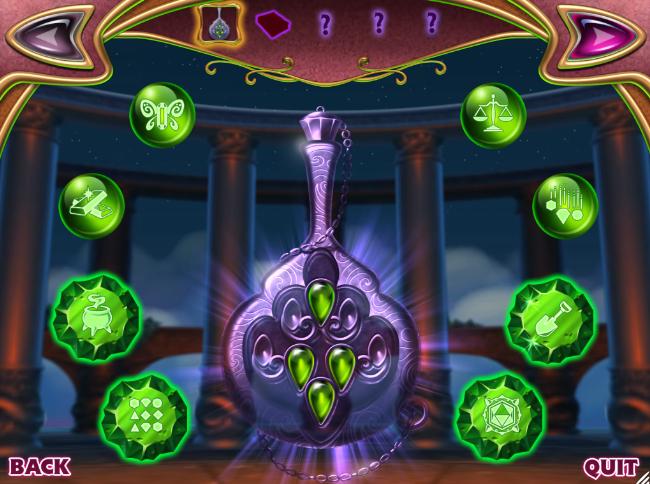 Quest Mode
In a first for the series, we now have a quest mode. Quest mode takes mini-games which are all played in a standard swap-3 fashion and has 8 challenges you can perform to gather gems to complete a relic. Once you complete the relic, you simply move on to the next as you perform certain tasks such as making combos break until reaching the bottom of the level to find gold, defusing a set number of bombs by breaking the correct color in a set number of time, and many more that seem to increase in difficulty as you move on.

One thing about quest mode is that there is around 40 different variations of these mini-games to try and each have a unique feel which keeps things feeling fresh and exciting the whole way through. The content in this mode is probably the largest in a Bejeweled game to date and requires a lot of careful thinking and strategy to finish, but having a relic become complete is a very rewarding experience to all of this which really makes this feel like the most memorable mode in any Bejeweled game to date.

Lightning Mode
Lightning Mode can best be compared to Bejeweled Blitz, except add in ten times more intensity. You have a set amount of time to rack up a high score while earning time bonuses which are set up in the board. The main thing that makes this challenging is that there a few time bonuses laid out and many times it can be quite a heated wait for the proper gem to drop down do break one of these said gems. To me, this was where my main addiction with Bejeweled 3 really took place as it may be time based, but it is easy to get lost in Lightning mode for hours just trying to stay alive long enough to topple your next high score.

Unlockable Modes
If the main four modes were not enough, Bejeweled 3 also features four more unlockable modes as well. If you think unlockable or bonus modes means less of a game, you would be wrong there. These four modes can be found mixed up in quest mode, but they all stood out strongly enough that the option to play them individually is great.

Poker mode is one of the first I unlocked while playing. This mode is simple to understand for the most part, as all you need to do is knock out a certain type of gem in a poker style pattern. For instance, two red breaks and three yellow make a full house. As time goes on, a skull will cover one of these possible hands, limiting you to the remaining four combinations and of course those all go as well so the goal is to get as many of the best “hands” as possible to obtain enough points to break the skull and continue to rack up points. 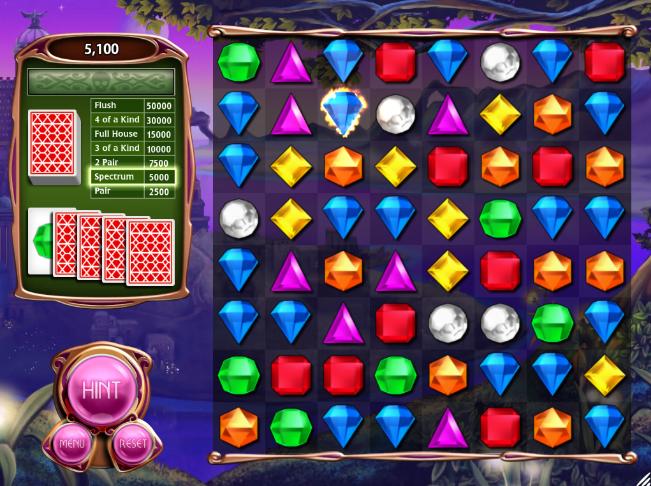 Next up is the very challenging Ice Storm. You must be quick on the trigger for this and make combos to stop the water from reaching the top. If the water does make it’s way to the top of the screen it will begin to freeze and just like that, your game is over and you must try again. This mode really comes down to strategy like others in the game, but it was fun attempting the whole time and each time I lost I had an itch to go back in for more punishment every time.

Butterfly mode puts gem-style Butterflies that slowly climb their way up the screen throughout each turn on the board. The only problem is an evil spider is at the top and you must match the color of the butterfly with nearby gems and ensure that the butterflies make it off the map safely. The last mode to talk about is the Diamond Mine mode which turns the map into soil which you must blast away by clearing gems to reveal gold and other treasures.

It is honestly crazy thinking about all the content and variations of gameplay that went into Bejeweled 3. There is so much to do and discover as you move through the game that the phrase “replay value” should not even be a issue for even the casual puzzle fan. For completionists out there with goals, there are also tons of badges to achieve to add in even more of a reward for trying everything.

Graphics & Audio
When I first turned on Bejeweled 3, I was like “oh, this looks the same”. First impressions can be deceiving though as Bejeweled 3 has a completely stunning presentation as you start to play the actual game. If you have a higher-end video card, you can even add to the visual eye-candy with Ultimate mode which was made for a 1920 x 2000 resolution. Add in some of the amazing level transfer animations and smooth as ever gem-clearing madness and this is the must beautiful puzzler the PC has seen.

The music in Bejeweled games has always been something I have never payed much attention to as I am usually so busy getting lost in clearing gems I don’t even think about the tunes. This time around seemed a bit different though as the music was actually quite memorable. Zen mode also provided some high quality sounds as I mentioned so sound in general seemed to have gotten the game kind of overhaul that the graphics received which made the game that much better in the end..well..since there is no end I guess I would mean til the end of my last session.

Overall
It is really hard to re-invent a puzzle game. Most sequels for puzzlers either go so far away from the original concept that the game feels completely different or just flat-out awkward. Bejeweled 3 is not one of those titles though as it stays true to the original formula the whole way through while creating a huge smorgasbord of new and original gameplay. From fast-paced intense matches to innovative ways to actually relax a players experience and plenty of customization, each user can find the mode that truly clicks with them. Content is also not an issue as it feels as if there are games inside of games inside of games in Bejeweled 3 that create endless ways to play. Of course the icing on the gem shaped cake is that experience feels complete and well thought out, making this one of the best puzzle games to come along in years.