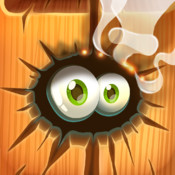 Beetle Breaker is a free, explosive physics-based puzzler developed by Master of Code and published by mobile heavyweight Chillingo. The player must use different kinds of bugs at their disposal to slingshot at, and destroy, a spinning target. Could Beetle Breaker be the next big addiction for iOS users? Or should we turn on the zapper, take out the bug spray and kill it before it breeds?

Have you played Dekovir Entertainment’s 2011 mobile game Amazing Breaker? If so, you’ll already know exactly what’s in store for you here. The gameplay is pretty much identical, although it would also be clear to those same people that the theme is radically unrelated. The most common primary goal is to sling your army of war-faring, kamikaze bugs at the target in hopes of destroying at least 90% of it with one bug remaining. Bug types range from mime-laying bugs, to plain explosive bugs, split-direction bugs and many more that become unlocked as you play. Adopting the now commonplace 3-star rating system, using them all to your advantage in successfully completing secondary objectives will ensure full completion. These can be as simple as destroying a specific part of the target that has a star lodged inside it. 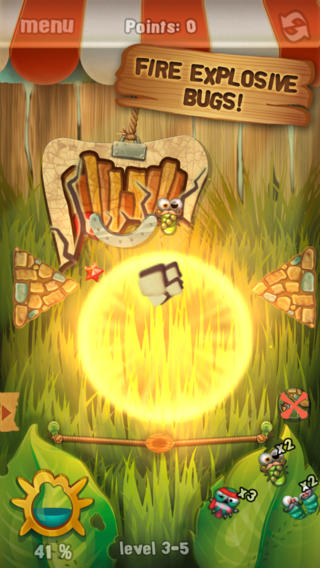 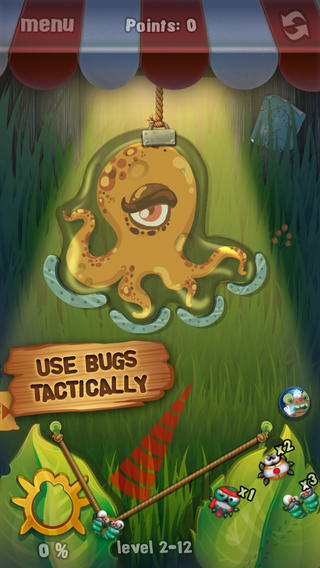 White bug outlines may also appear on the play-space, and causing an explosion within range of the different bug representations will grant you an extra bug of that type (treat them like opportunities for extra ammunition). Failing a level leads you to a Spin Wheel. Every now and then you will receive a free spin and whatever bug the arrow lands on can then be used as a sort of final chance to succeed. When you don’t have a free spin, spins are bought with micro-transactions (in-game coins). As if this inclusion won’t do enough to turn off cynical gamers, the constant advertisements will. The game is free, so it’s a given that it is supported by ads, but in a trial-and-error title, having one pop-up between tries and levels so often can be infuriating.

Beetle Breaker aptly presents the aesthetic of a backyard setting… although I have no idea who has a candy-striped awning in theirs, but let’s just ignore that, shall we? Otherwise, there is a great consistency with the visual theme as levels are represented as leaves on a growing pot-plant with the U.I. elements taking on a wood-grain texture. The targets themselves are of many forms (not necessarily bug-related as the above octopus proves), but again, exist as wooden objects. The bugs themselves are uniquely designed, however they magically get catapulted behind the slingshot upon release. Pretty sure that’s not how the laws of physics, motion and the mechanics of solid objects work. 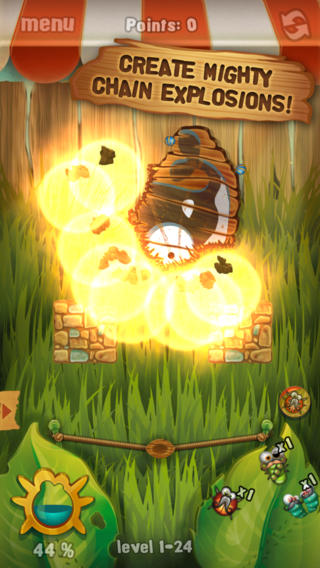 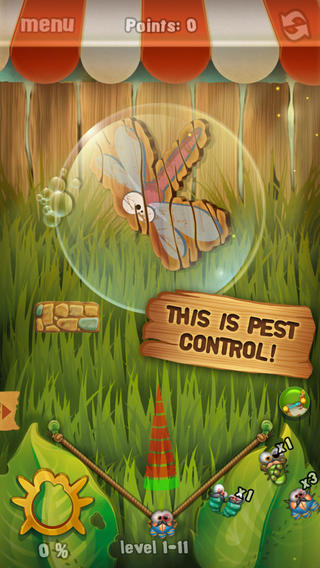 A small nuisance is the easily miss-able menu and restart buttons at the top of the screen. For some reason the developers felt they would possibly be a distraction and faded them substantially. And when following through with tapping the restart button, there is rarely any visual feedback; only a small audio cue. On the odd occasion, you will be asked ‘if you’re sure’, but only if you’ve already made some progress in the stage. The secondary objective symbols also do not expand, so it is near impossible to understand what each means without any text. Audio-wise, you get what’d you expect, with a light, playful theme and familiar garden sounds… although the bugs do make odd noises – seemingly recorded mouth noises from Master of Code employees.

Beetle Breaker is a challenging puzzle shooter (is that even a genre?!), but almost to a fault. It’s not so much that the levels themselves are too hard to pass, but the high star requirements for the next worlds means you’re going to have to achieve three out of three stars on most to progress past the initial 24 levels. That can be tough and trying. Annoyances such as the lack of visual feedback on the inexplicably faded buttons, unclear secondary objectives and the controls being locked-out as you await seemingly never-ending bouncing bugs/bombs, the overkill of advertising really ruins the experience. Yes, it’s a free title, but an ad after every level? Truly overkill. If you can somehow avoid utter frustration at these things, then Beetle Breaker may become your new go-to time waster.