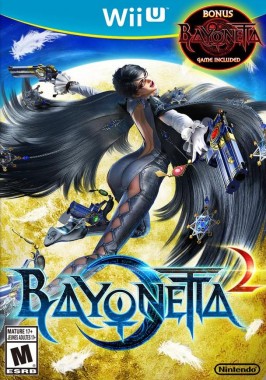 Overview
Five years ago, Platinum Games brought us Bayonetta. She was stylish, fast, and over-the-top, but at that time, that little title hit the spot and set a bar in the action genre, instantly cementing the female figure as a mainstay within the industry. Even though the game performed well, a lot of companies lacked the faith to back a sequel, so Platinum turned to the unlikely source of Nintendo for publishing rights. The Wii U itself seems like an unlikely home to such a wild beauty, but oddly enough, this sequel feels right at home on the platform. The big question for Bayonetta fans is what did we want out of a sequel and how much can be delivered this time around compared to the first game, which turned the knob up to the top and then proceeded to break it off completely. Let’s find out.

Story
Bayonetta was one of my favorite titles of the last generation. While the gameplay was great, the narrative was so much in its own world that it was a bit much to just jump into. You had a plot about an Umbran Witch who was extremely confident and killed angels, but there was not a lot of background on the characters – and the backstory we did get mainly painted a portrait of supporting faces, rather than Bayonetta herself. This sequel fixes that issue completely, as the true Cereza has been fleshed out entirely as the player goes on a ride to save Jeanne, who served as a strong ally and rival and ally during the first title. After Jeanne’s soul is taken to hell, Bayonetta aims to go on a rescue mission to repay the debt she owes the white haired witch, and this time, there are plenty of flashbacks and side narratives running parallel to the journey that give us a better look at Bayonetta’s motives and vulnerabilities. 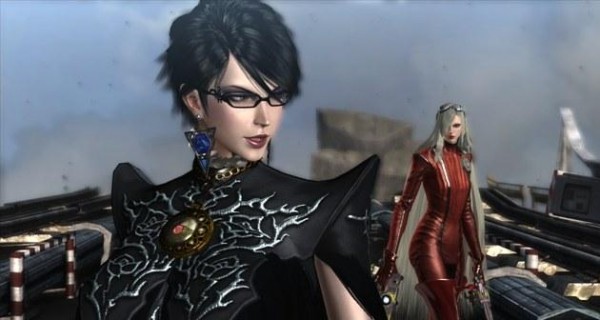 Loki is a new character that players run into rather early in the game, and serves as the plot device that ties everything together. Sure, we get a lot of great dialogue between Bayonetta and Loki as the immature kid deals with the protective and snarky witch, but there is a layer of humanity underneath their chemistry that brings new insight to the namesake. Yeah, Bayonetta is a sexy witch that kills “naughty little angels”, but the sequel takes us a bit further this time and shows that she still has depth and a caring spirit to boot underneath those flashes of skin and sexual gazes. I honestly enjoyed every single cutscene within the game as the writing is on point for the entire experience. It is hard for any title to keep an upbeat, sense of self when it peels back layers of its characters, but Bayonetta 2 does it with grace and still manages to capture that light and airy atmosphere of the first title, where its hard not to crack a smile while underneath the most extreme pressures. 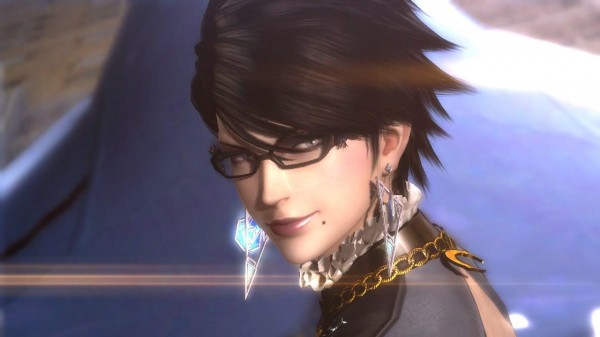 Gameplay
No matter how entertaining the narrative is, it will never be able to compete with the main course of this title as a whole, which is the gameplay. For returning players, you will be greeted with a game that feels a great deal like the first, as the gameplay is still fast and fluid, never missing a beat when it comes to excitement. Bayonetta has retained her trademark guns strapped to her feet, and still performs her stylish acrobatics while dodging enemies to go into “witch time”. Witch Time was a large part of the combat system of the original game, and that statement is even more true within the sequel, as proper timing is key to victory in order to temporarily slow down time and unleash intense combos and attacks on foes. Thankfully, the Wii U meets its expectations to pull off all of this chaos at once, as even though Bayonetta already felt highly polished, the sequel adds a couple of extra coats just for quality’s sake. 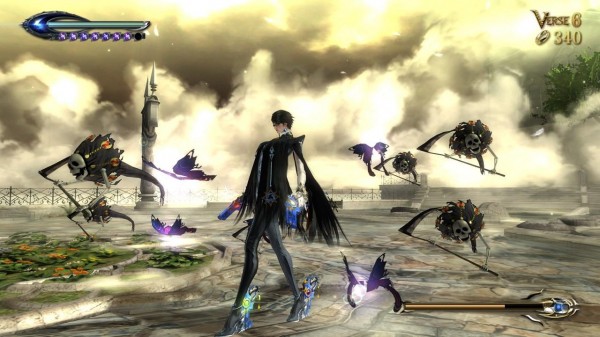 All is not old in this follow-up when it comes to the combat as well. The “Wicked Weaves” have gone infernal, and have a much larger area of effect when players manage to activate their Umbran Climax mode. Bayonetta now can switch styles of combat instantly as well this time around. When I say that, I am not speaking of the panther or other animal transformations that are still available, but more of the environmental changes that now explode onto the scene in the blink of an eye and greatly change the way the player has to control our female hero. One minute you will be on land, battling a few angels. The next the whole ground can rise up underneath the player and take you and the enemy to the skies as you sprout demonic wings. Interestingly enough, the combat still manages to maintain its feel, even though you may be in the sky or even underwater, so while it feels fresh – it still keeps a familiar essence to keep the player in a comfortable place. 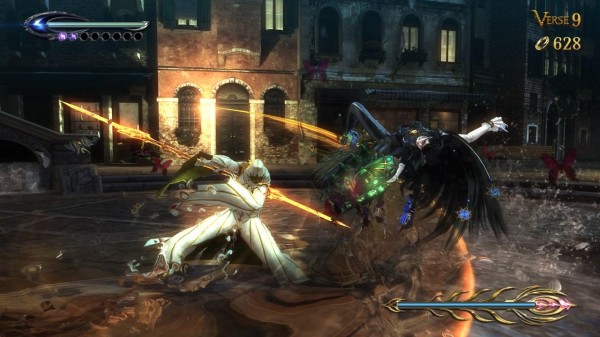 Even though the first title received critical praise, there were a few little features that some fans felt slowed down such a fast-paced title and it seems Platinum have listened to those voices. Remember the little mini-games that required us to dodge a lightening bolt in order to open a door or activate a switch? Those moments have been greatly reduced this time around and when one does show up, its nothing more than a trickle of nostalgia. Boss battles also feel a lot more immersive this time around as the number of quick-time events has shrunk, meaning most of the damage an enemy takes is by your own skillset, and not at the hand of a button. These are just minor changes, but they do a lot to keep the game flowing freely. It also helps that the Gamepad works well as a main controller, as I completed the main story two times with the device, and felt comfortable right from the start. 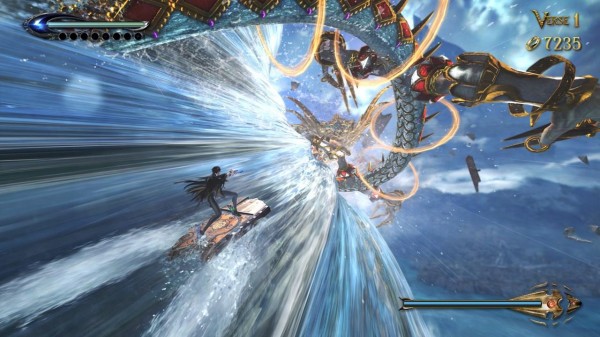 Whats great about Bayonetta 2 is that it gives the player a choice. You will beat this enemy in front of you. The challenge is a bit lighter and you are one of the toughest women in existence, so that will be a given. However, you can decide to take whatever route needed to defeat an enemy. Want to go through a stage and only use standard combos? Have at it. Feel like attaching trinkets to provide a handicap? That is ok as well. This title constantly rewards the player with medals after every battle, so no matter how you play, there is always another peg in the ladder to climb up and get better. With every chapter feeling completely distinct from the next, its very hard to feel bored as the gameplay doesn’t just change in this sequel, but constantly evolves so the player constantly improving as the challenges grow and new toys are unlocked for this witch to play with. 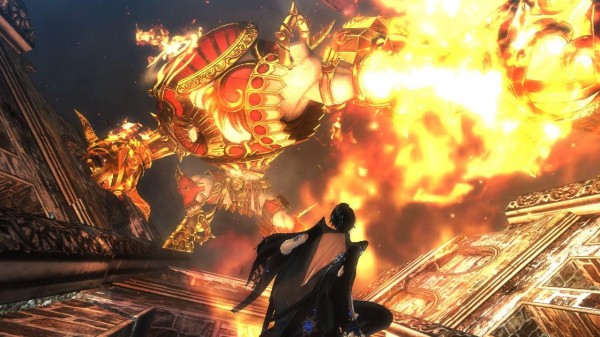 Those looking for a little something extra will be able to go back with a friend and try the new Tag Climax mode, which allows you to team up and take out enemies to earn halos. This mode has each player make a wager, where the winner will get the entire pot. Yeah, its not something you will play a lot, but it is a well crafted distraction and with AI partners possible, something anyone can participate in and garner more halos to unlock even more goods within the main game.

Visuals
Aside from the blue textures and shorter hair, Bayonetta 2 doesn’t look too much different from the first at a quick glance. As you begin to play however, you will notice the changes as the framerate is higher and the animations are even more fluid. There is something about just holding a button to shoot a watching Bayonetta walk with one hand on her hip that speaks volumes about this experience, as you can really tell how much attention to detail went into development. I would also say that Bayonetta 2 is a much brighter title, as the locales feature a ton of color, compared to the more brown and dark hue of the first adventure. No matter how much action was going on – be it the television or gamepad, I never once had slowdown or drops of framerate, and that alone is a testament in days where publishers are putting out titles that can barely handle walking animations. 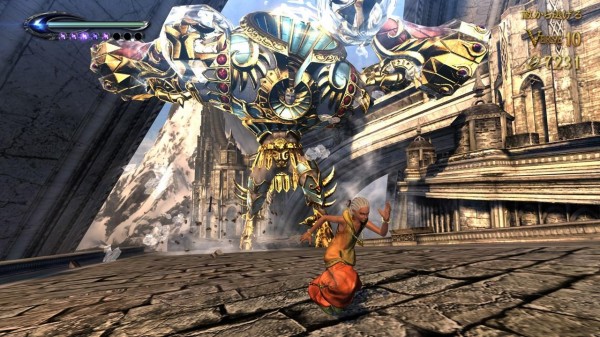 Audio
The soundtrack is absolutely phenomenal. Featuring new vocal tracks that still have a nice pop music twang, Bayonetta 2 has replaced the “Fly me to the Moon” with melodies that fit this new world perfectly. There are also orchestral tunes that set the stage for some larger-than-life boss battles, and bring hell to life by setting an intense atmosphere through song. Fans of Enzo, Luka, Jeanne, Rodin, and Bayonetta herself will be thrilled to know that the voice team have remained the same, and the actors do a superb job of bringing these characters to life. Our characters in this journey take on a wide variety of emotions, and it was nice to see that every one came across as legitimate.

Overall
Bayonetta 2 could best be compared to the likes of The Ocarina of Time, Metroid Prime, and even Super Mario 3. Sure, none of these titles have anything to do with Platinum Games’ follow-up, but in the same way that those sequels defined their franchise, Bayonetta 2 delivers nothing but perfection to send a strong message to the industry, proving that you don’t have to sell out to gimmickry to deliver a top of the line product. Bayonetta is a proud female hero that has earned her spot as a top mascot of her genre, and I can easily say that with the quality of this sequel, this is just the beginning of great things to come for the stylistic witch. While all of these other franchises on other consoles try to re-brand and change themselves to fit in with the current image of today, Platinum hit it out of the park and sent a wink to the other kids in the park by allowing Bayonetta to simply be herself in what is sure to go down as one of the greatest sequels of all time. 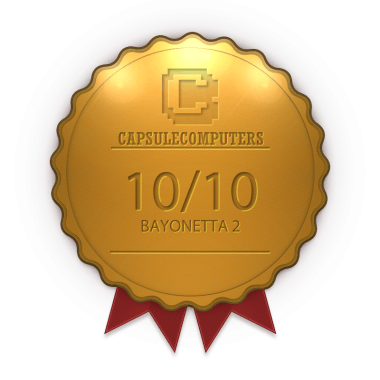