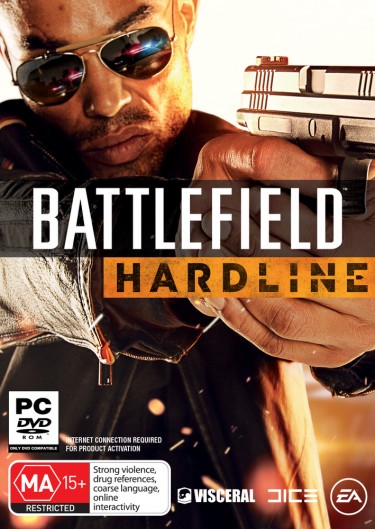 Visceral Games wanted to take the venerable Battlefield franchise in a new direction, so DICE took the Dead Space developers up on the deal, bringing the Battlefield Hardline to life. Battlefield Hardline takes the battle to the mean streets of Los Angeles and Miami that puts an explosive twist on the classic childhood game of cops and robbers. The game features a single player campaign with a star studded cast and some serious changes to Battlefield’s multiplayer formula.

The single player campaign stars Detective Nick Mendoza (Nicholas Gonzalez), the newest member of Miami’s drug squad. Mendoza is the good cop who believes in justice and doing the right thing by the book. Unfortunately, his new unit is full of cops who would prefer to do things in a not so legal manner in hopes of keeping the peace. With his partner Khai (Kelly Hu), Mendoza dives into the murky waters of street justice, corruption, and drugs. 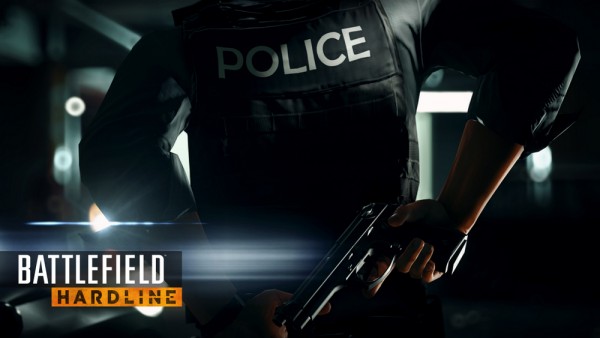 Visceral Games sought to create a cop show in a video game with Battlefield Hardline’s single player campaign. The cast packed with TV actors, the short “next time on Hardline,” and the arc like pacing of each episode calls for a hearty mission accomplished! Battlefield Hardline hits all the TV cop show tropes and would fit right in on prime time TV with the likes of Hawaii Five-0 and Chicago P.D. The writing is solid and hits the right tempo of intensity interspersed with some genuine laugh out loud moments. 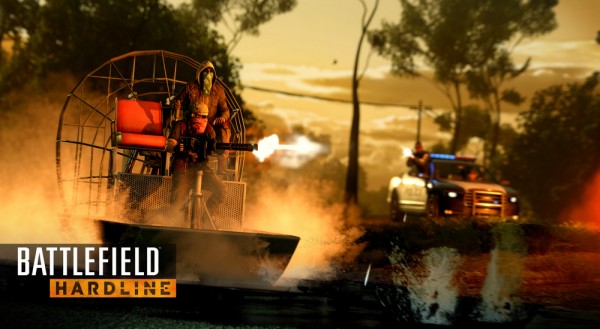 The solid story is backed up by some interesting new mechanics, including a new emphasis on stealth and non-lethal takedowns. The entire game can be played with a body count that barely pushes past a hundred dead, quite a low number for modern first person shooter. Players are encouraged to arrest enemies or incapacitating them with non-lethal weapons by enticing players with extra goodies from Expert Points. The stealth mechanics are well done, though not too difficult for any player patient enough to methodically lure enemies away. The only thing I could find wrong with the stealth mechanics was the occasional issue when an enemy could hear a brass shell through a thick cement wall.

There are plenty of collectibles in the single player campaign. Evidence collected throughout the game solves a few extra mini-stories that is separate from the main plot. The player’s cellphone will ring throughout the level to remind them to scan the area for evidence. Additionally, an arrow on the scanner will help guide players to the general direction. The other collectible is a little more hands on. Before each level kicks off, players are given a list of open warrants of wanted criminals. Enemies scattered across the level can be scanned and once a wanted criminal is found, players are encouraged to either arrest or execute a non-lethal takedown for a heaping bonus of expert points. I really enjoyed these warrants, as they added an extra challenge to the single player campaign. 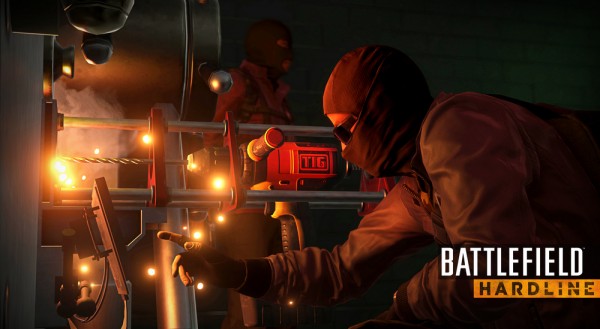 Multiplayer serves as the unfortunate counterpoint to the strong single player campaign. Although the game uses a modified Frostbite 3 engine used in Battlefield 4, the game doesn’t feel like a Battlefield title in all the wrong ways. There are some great ideas that I hope to see implemented in Battlefield, but the overall feel of Battlefield Hardline just feels sloppy.

The four Battlefield 4 classes have come back with some serious shuffles. The classes have been rebuilt with a new focus on infantry combat. Machine guns and rocket launchers have been given the boot in favour of zip lines and grappling hooks that players have been drooling about since Battlefield 2: Special Forces. The Assault class is now known as the Operator and refocused as purely a medic. This is probably my favourite change and one begged for by Battlefield players, as the loss of the grenade launcher severely cuts down on the number of selfish Assault players who refuse to carry any sort of team oriented gadget. The grenade launcher has shifted to the Engineer class, now known as the Mechanic. The 40mm launcher replaces the rocket launchers, which now only spawn as special pick-ups scattered across the map. The Mechanic has also taken over the mobile spawn point from the Recon/Professional class and the PDW type weapons that were previously available to all classes. The Support/Enforcer class has largely remained the same, serving as an ammo mule packed to the ears with explosives. Except now, the Enforcer can haul around a ballistic shield. The Recon/Professional class has probably seen the most disappointing changes overall, as they now have no close quarter options with the loss of cross-class weapons. 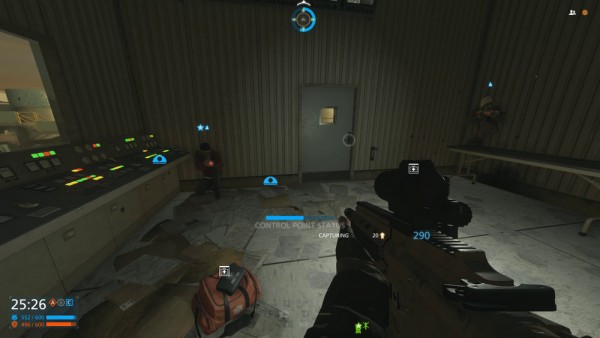 Weapons and gadgets are now purchasable with cash earned by playing the game. No longer are players forced to play a class to unlock some later weapon in a specific order. Instead, certain weapons are locked to one faction and a certain number of kills must be reached to unlock it for the other faction. Weapon accessories are also locked behind a kill counter. Personally I’m rather fond of this system gives player a lot more flexibility to play the game how they want to sooner, versus grinding things out.

Commander mode makes a return as Hacker mode. It is possibly the best commander implementation in the series so far. Hackers have been given access to more tools to support their respective teams. The traditional UAV and jammers are back, along with a much needed tweak to the orders system. This time, squad leaders do not have to explicitly accept their orders. Instead, the point of interest automatically show up on the squad HUD and give the hacker bonus points when followed. Cameras, weapon drops, gas valves, and power transformers are scattered across the map. Dueling hackers will fight for control of these points to give their squad the strategic upper hand. These can range from damaging and dazing enemies from the gas and power transformers, intelligence from cameras, or access to heavy weaponry. The only problem with the mode is the unintuitive controls from Battlefield 4 have carried over, with left clicks handling all the selection, right clicks immediately clearing the current selection, and an annoying menu that blocks the screen. I would have preferred a control scheme a little more familiar to RTS players. 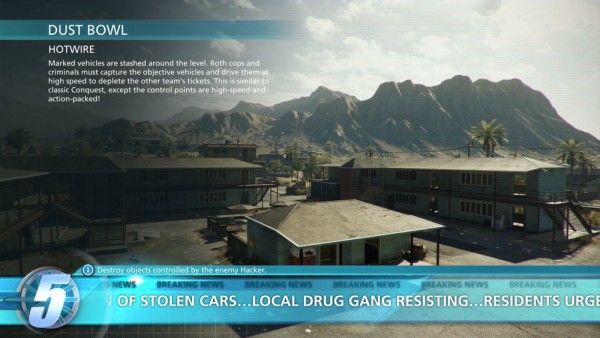 Visceral Games has brought back the classic Conquest and Team Deathmatch modes to complement their new game modes. Blood Money lets the two teams to fight over one pile of money. Players load up their bags and hustle off to their vault to stash their cash; however, crafty enemy players can circumvent the intense firefight near the stack of money by raiding the enemy vault. The mode is possibly the best of the new modes, but it isn’t saying much. Games often end in a team deathmatch style dog pile over the cash pile, which isn’t really inspiring. Hotwire is possibly the most disappointing of the bunch. It is billed as a high speed version of conquest where players need to drive special vehicles at high speeds to gain conquest points, while being relentlessly chased by the enemy. In actuality, the game mode is a rather boring exercise in driving around until the player hits an ambush and gets blown off the road. Heist is a slight twist on Rush mode, where the attacking team must plant their bombs on a safe and then run the contents back to their base. The two final modes will come as the biggest shock to Battlefield veterans. Crosshair and Rescue removes ability to respawn, instead favouring round based combat ala Counter Strike. Crosshair is a VIP-based mode while Rescue will see cops attempting to rescue a hostage. These two modes are not particularly popular, but are a refreshing new take on the franchise. 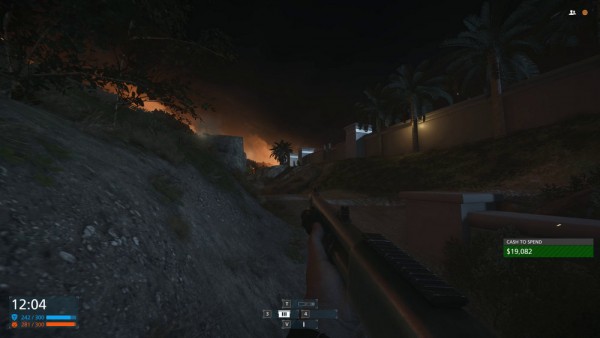 Battlefield Hardline refocuses the franchise on infantry combat. A vast majority of the vehicles now serve as transportation, with the exception of one or two vehicle spawns per map. Instead, players are encouraged to poke themselves out of the window and serve as their vehicle’s firepower. It’s a great idea, but does little to recreate the epic vehicle battles the series is known for. Mixed in with the game modes that either encourages bottlenecked infantry combat or general wandering around, the multiplayer mode feels like it is lacking some depth.

The new maps are decent, though it lacks a stellar map that will be forever cherished to the point that remakes are demanded in every future Battlefield game. I give credit to Hollywood Heights as being the best demonstration of the Frostbite 3 engine’s destruction capabilities. By the end of the game, the lines of fire are completely different due to the extensive destruction of the walls.

The dreaded net code issues with Battlefield 4 feel like they have been largely fixed in Battlefield Hardline. Hats off to Visceral, as the hit registration feels pretty darn good to me. It is worth a mention that a lot of Visceral’s work on the net code will be reflected in Battlefield 4 in a future patch. 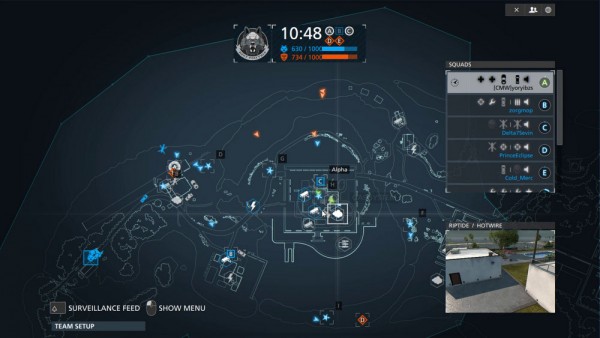 Battlefield Hardline looks great. Great care has been taken to recreate the TV experience, including camera angles and the new report type intros for the loading screens. The maps scream LA and Miami. Since the game is running on Frostbite 3, the system requirements shouldn’t come as a shock to any players, as they remain largely the same.

The single player voice acting is stellar, thanks to the star studded cast Visceral landed. I only wish they used some of that studio time to have the cast record some lines for the multiplayer gamer, as there are spots of weak voice acting showing through at times. The soundtrack is spot on, with plenty of urban tracks to compliment the game’s setting and the in game radio in the multiplayer cars. The sound effects are solid, with Battlefield Hardline continuing the tradition of strong surround sound audio effects. 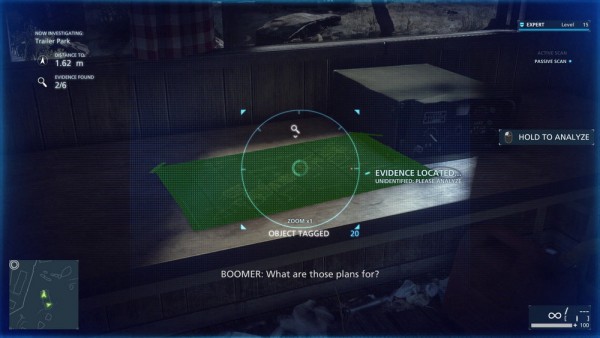 My feelings with Battlefield Hardline are pretty mixed. On one hand, it delivers the best single player experience in the franchise, on the other hand, the multiplayer doesn’t feel worthy of the franchise name. For Battlefield players who frequent infantry only servers, Battlefield Hardline may be the game they have been waiting for all this time. The major changes to the class system have some hits and misses. Hats off to Visceral for taking a huge gamble with the franchise, I genuinely hope they handle all future single player campaigns. Unfortunately, the big draw of a Battlefield game is the multiplayer. It feels pretty hollow due to the focus on infantry combat and the uninspiring game modes.