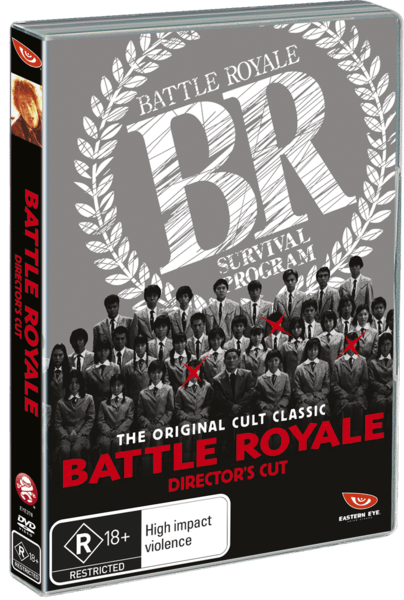 Overview:
More than a decade on since the conception of Battle Royale, this film shows little signs of ageing. A lot of films over time can become stagnant and their message can be lost on future generations. That is not the case though with Battle Royale. It is a true testament to the films quality that it can still stand up today and leave just as much of an impact as it did over a decade ago. This isn’t just an ordinary film, this is art.

Quentin Tarantino has went on record to say that Battle Royale is his favourite film and a big influence to his work (Kill Bill in particular). It’s little wonder why such a critically acclaimed director as Tarantino looks to Battle Royale for inspiration, as this film features many elements that film buffs would recognise now as hallmarks of his work.

Whether it’s the aestheticism of violence, the deep plot and rich characters, the profound message beneath it all or it’s impact and affect on film making itself, it’s hard to argue that Battle Royale isn’t a cinematic classic. 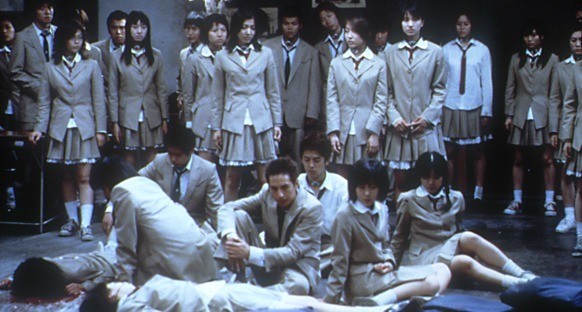 Story:
Battle Royale is a film that sets out to make an impact. It’s clear from the get go that this is not your ordinary run of the mill film. We see early on that there are bigger things being set into motion and a large scale plan set in mind.

The film revolves around a survival game. Not just any survival game though, the survival game that began all survival games. If you have seen or read any survival game fiction in the past decade there is a high chance that it was inspired by Battle Royale. A current example of which is The Hunger Games, which might as well be the American version of Battle Royale, it’s just that similar. The point I’m making is that this film is genre defining. It’s impact is still felt to this very day and it’s not simply about being a landmark film but being a cultural landmark.

At the time of it’s original release this film received a large amount of backlash from the Japanese public, mostly due to it’s overwhelming amount of violence. At the time youth violence was a major issue in Japanese culture and continues to be to this day.  The film is notable for it’s lavish violence involving young people. A lot of politicians and parents were outraged by the film and considered it as promotion of youth violence, when it is in fact the opposite.

The film does not stop to question the actions of the youths, in fact it openly shows the level of violence these teens can unleash. Instead the films poses a question to the adults, ‘why is it that these kids are the way they are?’ Throughout the film we are given hints towards that answer, but it isn’t until the final moments that the question is even asked. The film’s director, Kinji Fukasaku, a visionary of his craft, does this intentionally. After the final scene the viewer is left to think back on the events of the film and the answer is as clear as day. The youths are a product of the adults that shaped them. That is what he has to say to the adults. You can not blame the children for what you made them, you can only blame yourself. What he has to say to the youths is perhaps the most profound of all. He beckons them to run. Because in a world where you are powerless, what more can you do?

Fukasaku wants to make a change with this film, that is clear from the outset. It’s hard to not be stirred by a film such as this, the acting is deft and the pacing is precise, the message is clear and the timing is right. The emotion of this film could leap generations and even cultures, the message still rings as close to home as it did more than a decade ago and the weight of this film is almost too much for society to handle. It damn near tore apart Japan upon release and to this very day it continues to speak to people. That is the benchmark of a work of art. 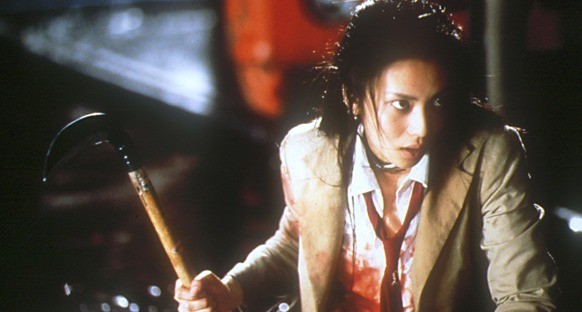 Visuals and Audio:
From an aesthetic stand point, Battle Royale is a feast for the eyes. Fukasaku shows that he definitely has an eye for creating atmosphere through his direction and he uses the gorgeous scenery of this moist Japanese island to it’s utmost limits. The beauty of it all is juxtaposed with the gratuitous violence and gore. Through the violence Fukasaku shows passion, emotion, elegance and above all humanity. His visual direction is stunning and has not aged a day in a decade.

When it comes to the film’s sound, it’s best described in one word – ambient. For a film so harsh and brutal, it’s easy to miss the quiet moments and the peaceful melodies intertwined with the darkened world these characters are stuck in. The soundtrack is simply as gorgeous as the films visuals and provides the perfect backing to every single scene, there is never an off moment. That’s what makes it so very good. 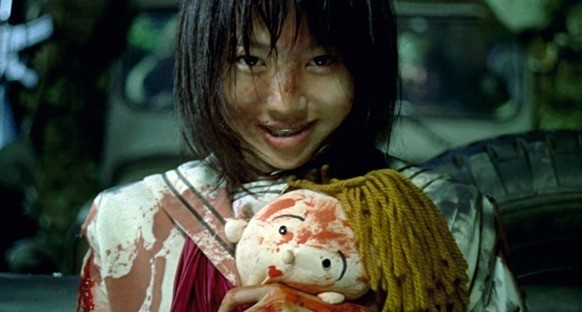 Extras:
This special edition DVD release features a plethora of extras for fans to plough through. It is without a doubt the most bonus features I have ever seen for a film, and they aren’t just trivial frivolities, they are full blown behind the scenes content and extra footage that has never before been seen. There is so much on disc that there is just too much to list.

If you are into special features or just a huge fan of Battle Royale, you will have more than enough extras to sink your teeth into, making for what is without a doubt the definitive release of this film. 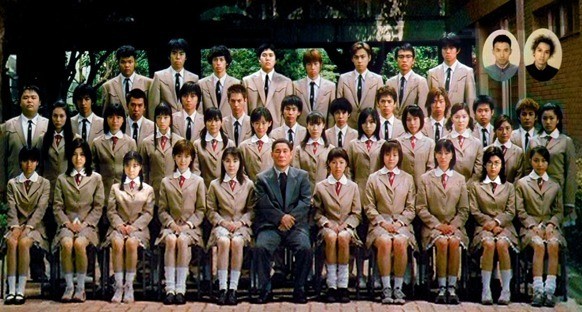 Overall:
Battle Royale is a masterpiece. There is no two ways about it. From start to finish, it is a film that challenges society, breaks down the boundaries of what is right and wrong and even forces the viewer to question themselves. After more than a decade, Battle Royale is still as ground breaking as it was when it was first released. It’s still as profound and it’s still one of the greatest films ever made.

What are you waiting for? Run. Run for all you’re worth.