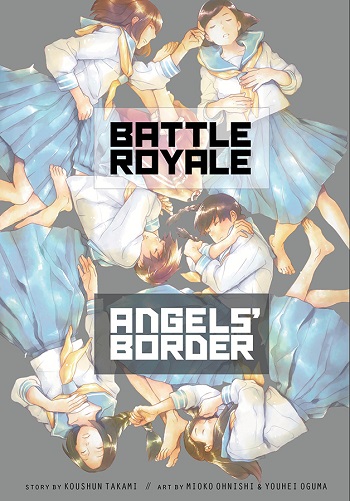 Overview
Koushun Takami’s Battle Royale is a novel that many are very familiar with due to its dark content and an extremely successful live-action movie. Despite being filled with numerous deaths and despair, Battle Royale’s death game has a few scenes that will specifically stand out in many readers’/viewers’ mind and that is the scene that unfolds in the lighthouse. Due to this being such a memorable event, the girls in the lighthouse have been given their own spin-off manga in Battle Royale: Angels’ Border. Now with this spin-off being released in North America, should fans of Battle Royale pick it up?

Story
For those unaware, the story of Battle Royale takes place in a world where Japan is under the power of the totalitarian rule of Greater East Asia and every year a horrifying military experiment is held where one class of ninth graders from the area is forced into a program where every student of the class is in a battle against one another. These ninth graders are forced to kill one another until there is only one person left standing, or if they choose to not kill each other, then every one of them will die.

Battle Royale: Angels’ Border takes place during the events of the Battle Royale story and while those familiar with the series are aware of some of the events that happened in the lighthouse where six girls have holed up in an effort to survive together only for events to unfold in a gruesome manner that epitomizes the horrific situation these students have been placed in.

The story in Battle Royale: Angels’ Border is told through two chapters, with the first chapter focusing primarily on Haruka Tanizawa and Yukie Utsumi as the two keep watch at the top of the lighthouse. During this time Haruka struggles with her own feelings as she realizes that she is in love with Yukie and will do anything to protect her, even though she knows that Yukie is in love with someone else. Little do they know that while they are up keeping watch, the rest of the girls are beginning to turn on one another.

The second chapter deals more with the events that take place before what happened at Battle Royale and involves Chisato Matsui and Shinji Mimura having a chance meeting on a day off of school where the two discuss past tragedies that have occurred in their families and how they both want to take and live for themselves and not be moved away by the flow of everything around them.

These two chapters wrap up in a manner that anyone familiar with the material expect since this is more about expanding the characters as well as giving a face to the tragedy that takes place in the story since these girls had lives and hope for a future before they were forced to participate in Battle Royale. This creates an emotional and tightly knit story despite being short and readers knowing the outcome, though it feels like there was a missed opportunity here by focusing so heavily on the past in the second chapter.

It is worth noting however that those unfamiliar with the original material will probably not be able to enjoy Battle Royale: Angels’ Border quite as much because not only does the manga only briefly go over the whole situation but also references events that take place outside of the releases’ scope.

Artwork
It is worth noting that this is a Viz Signature release, meaning that the release is larger than normal being sized at 8.2” x 5.8” meaning all of the artwork is larger and more detailed than a standard release. As mentioned before, Battle Royale: Angels’ Border is separated into two separate chapters and the artwork for each chapter is handled by a different artist. The first chapter, following Haruka and Yukie, is handled by Mioko Ohnishi, while the second chapter is handled by Youhei Oguma. Both artists have a similar looking style, with Oguma being more detailed with smaller aspects such as clothing and character details while Ohnishi’s drawings having more emotional impact and better character expressions.

This does cause a problem however due to the fact that any time that the story focuses back on the events happening in the lighthouse, there are variations in the way that some characters look, such as Haruka having a completely different hair color. Though this isn’t much of an issue due to the way the second chapter focuses on the past, it is a distracting oversight. There is also a problem with the way that the manga tends to jump from scene to scene with very little transition, which is hinted at in the bonus script.

Extra Content
There is a fair amount of extra content included in Battle Royale: Angels’ Border, beginning with a color illustration of the lighthouse and a brief rundown on what the world is like in the story. At the end of the book the original script for both chapters is included and not only does the original script give extra detail about certain scenes that were not shown in the release, perhaps due to page restrictions, as well as alternate ways a few scenes could have been shown. The book closes out with an “Afterword” from author Koushun Takami, talking about writing the story.

Overall
Rarely does a side-story add extra detail to the events that occur in the main story, especially over a decade after the original story was released, but that is what Battle Royale: Angels’ Border manages to accomplish. With the lighthouse being one of the iconic moments in Battle Royale, this release adds some extra depth to these characters that once had hope before being thrown into this twisted game, even if it does have a few issues.