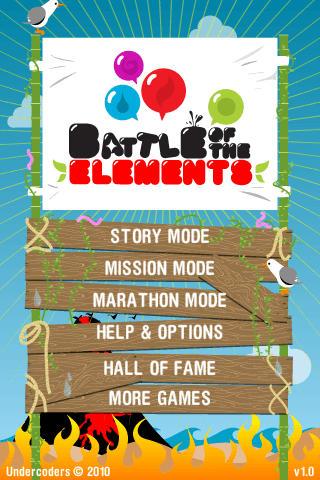 Overview:
Wind, Earth, Fire, and Water.  These four elements govern our way of life and make the world as it is today.  What if we could master these elements and turn them against foes?  In Battle For The Elements for the iPhone you will be able to.

Story:
There are six different selectable characters to choose from and each has their own unique story.  Though each story revolves around hatred for the human race and what they have done to their species.

Whether it be the direct murder for food, or the loss of their homes due to the ever growing human population, the animals in which you play are out for one of two things.  Either revenge to make their species safe again, or to restore the balance which has been broken in the world.

As you begin the story, the game tells you a small bit of the character’s backstory, and there is no mention of the story throughout the game.  Only the ending is told after you reach the end of the game.  As it stands the storyline is pretty weak, but passable for a puzzle game.  If anything it is great to see that they actually incorporated a coherent storyline to go along with the elements. 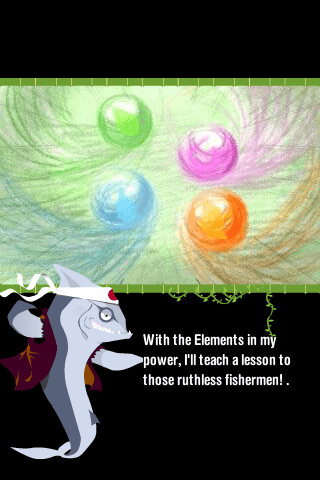 Graphics:
As you play through the game, your characters are animals which have both human reactions and human clothing.  The characters are drawn in a cartoonish childish style, however this does not take away from the game and their overdone reactions are great for comedic relief when you are either winning or losing.

Gameplay:
There are three variations of gameplay offered by Battle of the Elements.  There is the marathon mode which is a race against the descending elemental blocks.  You can continue endlessly until the blocks reach the bottom line. There is also another variation called Mission Mode.  Which offers forty different puzzles that must be eliminated completely to be completed.

Then there is the final mode, story mode.  As I said before story mode involves six different characters, and there are a total of six battles you will fight as you continue on your story.  Against the five other characters, a mysterious reflection of yourself, and finally a mystery boss to receive the elements and change the world in your favor.

The gameplay is simple, but complicated.  Thankfully there is a tutorial offered right at the beginning of the game, and is recommended to be taken.  The tutorial explains all the bits and pieces of the game that are necessary to win.  Without the tutorial the game would be much more difficult and harder to manage.

There are four different elements, each with their own color and symbol.  Blue is a water droplet, purple is a wind current, red is a burning flame, and green is an earth leaf.  Unlike other puzzle games of this type, there is no bonus for matching colors together.  Instead you must take one of each of these colors to have any effect. 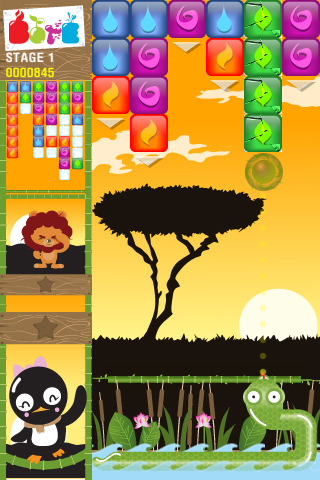 At the bottom of the screen is a snake, and you must slide your finger down, and the snake will take the bottom most block of element into itself.  Sliding your finger back up will force the snake to spit the element back out into its current column.  Unfortunately due to the fact that the game is entirely focused on dragging controls, there are some recognition problems which force the snake to pick unwanted blocks from unwanted columns.

The true way to beat the game is to take each of one element, forming a super element that will take the same color of the first element in your combination.  Meaning if the snake consumes a blue water, red fire, purple wind, and green earth; a blue water super element would be formed.  This element can then destroy any block of the same color it is touching, and any block that is touching that block of the same color causing a chain reaction of destroyed elements.  There is also a special kind of ice block that has no element, but takes the element of any super element thrown against it or near the destruction.

The first person to have their elemental blocks breach the breaking point, loses.  The winner then will advance on to the next stage and closer to finding the true elements and their location.

The gameplay is quite enjoyable if not difficult to master at first.  Once you learn how to play it, it is a great little puzzler and the marathon mode offers plenty of quick enjoyabilitiy. The tutorial is a great help, though unfortunately due to the learning curve there may be a lot of people who will find it difficult at first and may not attempt to do better.

I give Battle of the Elements for the iPhone/iTouch