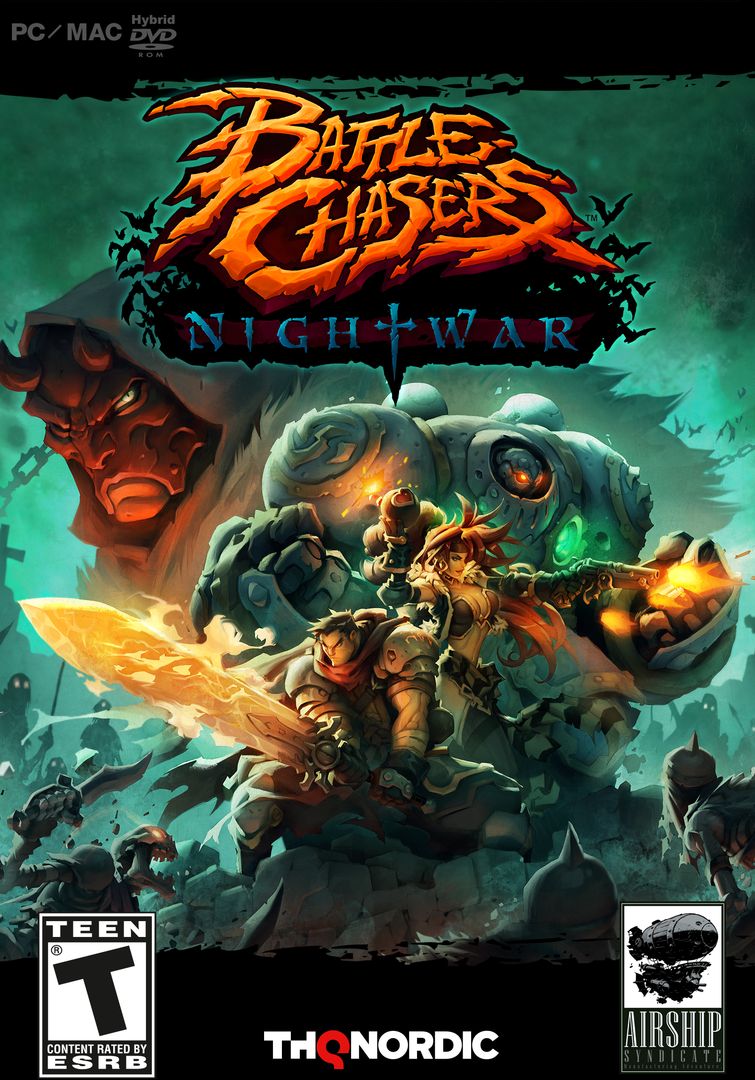 Battle Chasers: Nightwar follows the adventures of Gully and her defenders as their airship is shot down by bandits. They land on an island known to hold vast stores of mana, drawing the interest of the wizard Knolan, one of Gully’s defenders. Their investigation gathers steam as the team discovers the bandits are employed by an unknown woman who is skilled in dark magics.

As a person who never read the original Battle Chasers series, the game serves as a decent jumping off point. Characters are introduced slowly, and the game’s plot works well as a standalone story for franchise newcomers. The writing is decent, though the dialogue can get a little shallow at times. There is plenty of optional lore for players to dig into, but I didn’t find it to be a riveting read. 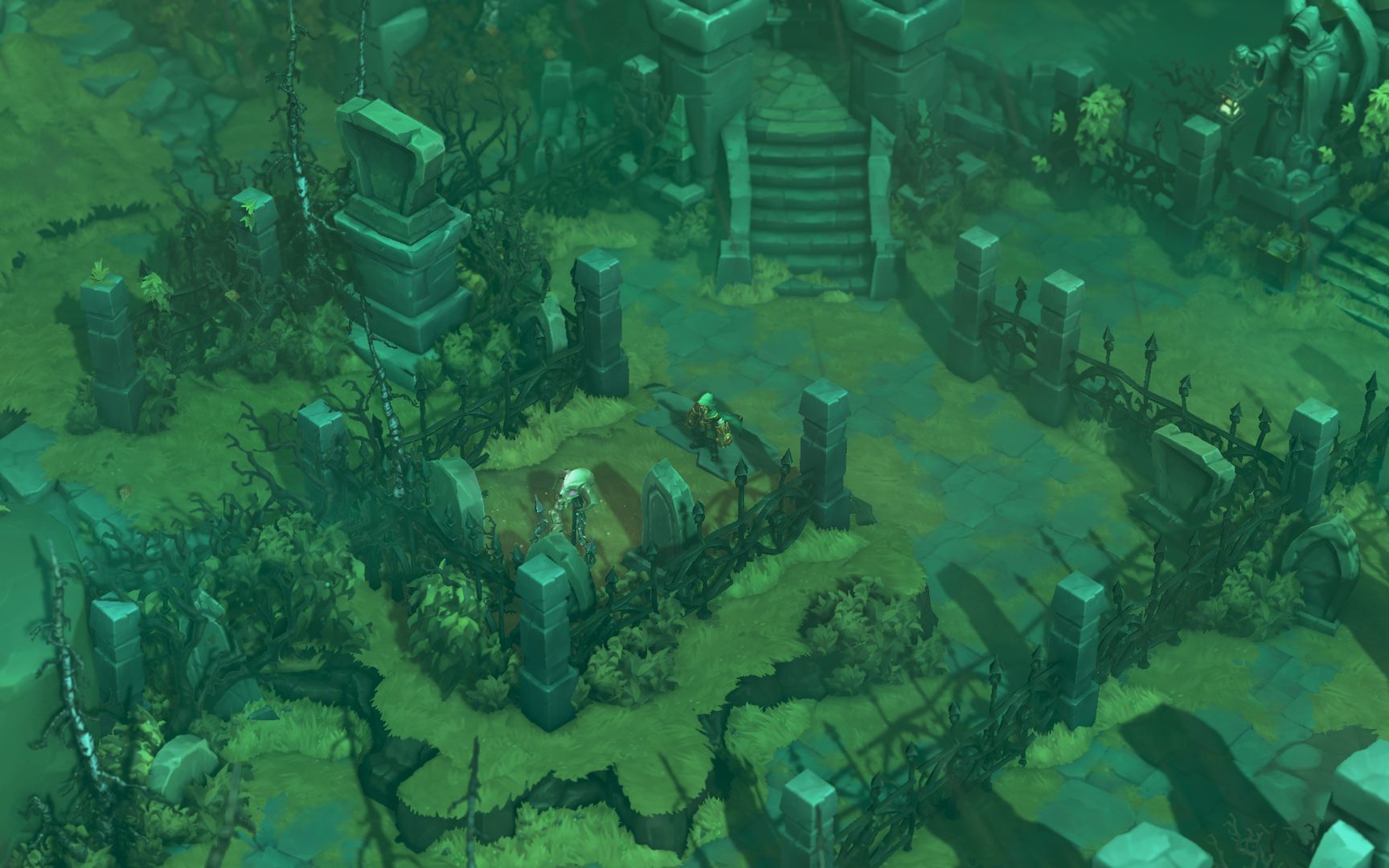 Battle Chaser: Nightwar is a modernized take on the classic turn-based JRPG. The battle system lets players pick three of the five main characters. Each character has two perk trees that allows them to specialize. During battle, characters can use weaker instant abilities generate overcharge to gain temporary mana that will disappear at the end of the battle or consume mana for more powerful abilities. Using these abilities will drop the character down the turn order, so players need to strategize accordingly.

The game design has elements of top down action RPGs like Diablo with randomly generated dungeons and a decent item grind. The crafting system is deep, with options for crafting equipment, enchanting equipment, and brewing a variety of potions for both offensive and defensive purposes. Players can select up to three difficulty levels in dungeons, with higher difficulties offering better quality loot. The highest legendary level adds an extra challenge by resetting the entire dungeon on death.

The level design is solid. The dungeons are an enjoyable mix of randomly generated sectionsand pre-made segments for puzzles and boss fights. The puzzle segments are light enough to stimulate the brain a bit, but not hard enough to be a serious roadblock to progression.

Battle Chaser: Nightwar can be a tough game. Inn prices gradually rise with levels. Dying is punished with a gold penalty. Items are expensive, and the only crafting station consistently available is the alchemy station. The mana cost for major abilities is quite high compared to the available mana pool. Players need to rely overcharged mana to get them through most of the dungeon, so they can save mana for the most challenging fights. While players have some control over dungeon difficulty, part of the challenge is several enemies in the game hit incredibly hard and often. I have a hard time imagining a successful party at higher difficulties that doesn’t follow the holy RPG trinity of damage, heals, and a tank. 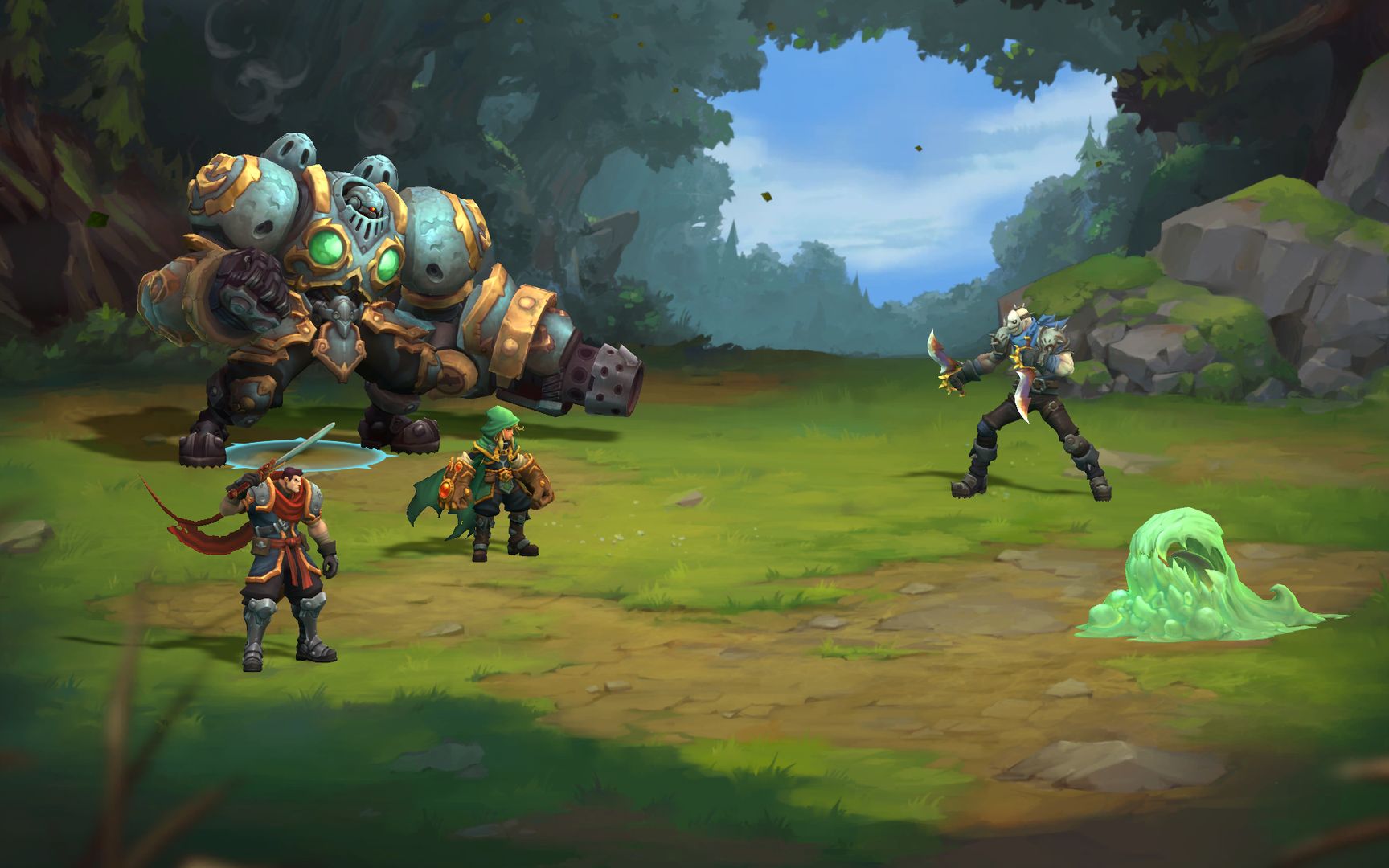 The game’s tutorial system could use a little work. The tutorial itself is very short and only teaches players the absolute basics. The rest is left for the players to figure out on their own. The most frustrating aspect is the lack of documentation. The game has plenty of writing for just about everything but the actual game mechanics. The only way to find how stats affect characters is to check online, as this information only pops up occasionally as a menu tooltip.

My biggest gripe with Battle Chaser: Nightwar is its slow pace. The movement speed is bit too slow in both the overworld map and the dungeon map. In the dungeons, opening chests and boxes takes a few seconds to fill a timer. One character has a short sprint as a dungeon ability, but the charges are limited. I feel a 10% movement speed increase and removing the loot timer would go a long way in tightening the game’s experience.

The controls for Battle Chaser: Nightwar is excellent. The controller works well, and the layout should be familiar to anyone who has played a JRPG. The keyboard and mouse offer traditional bindings that replicate the controler and a left click to move option for those who prefer Diablo-style controls. 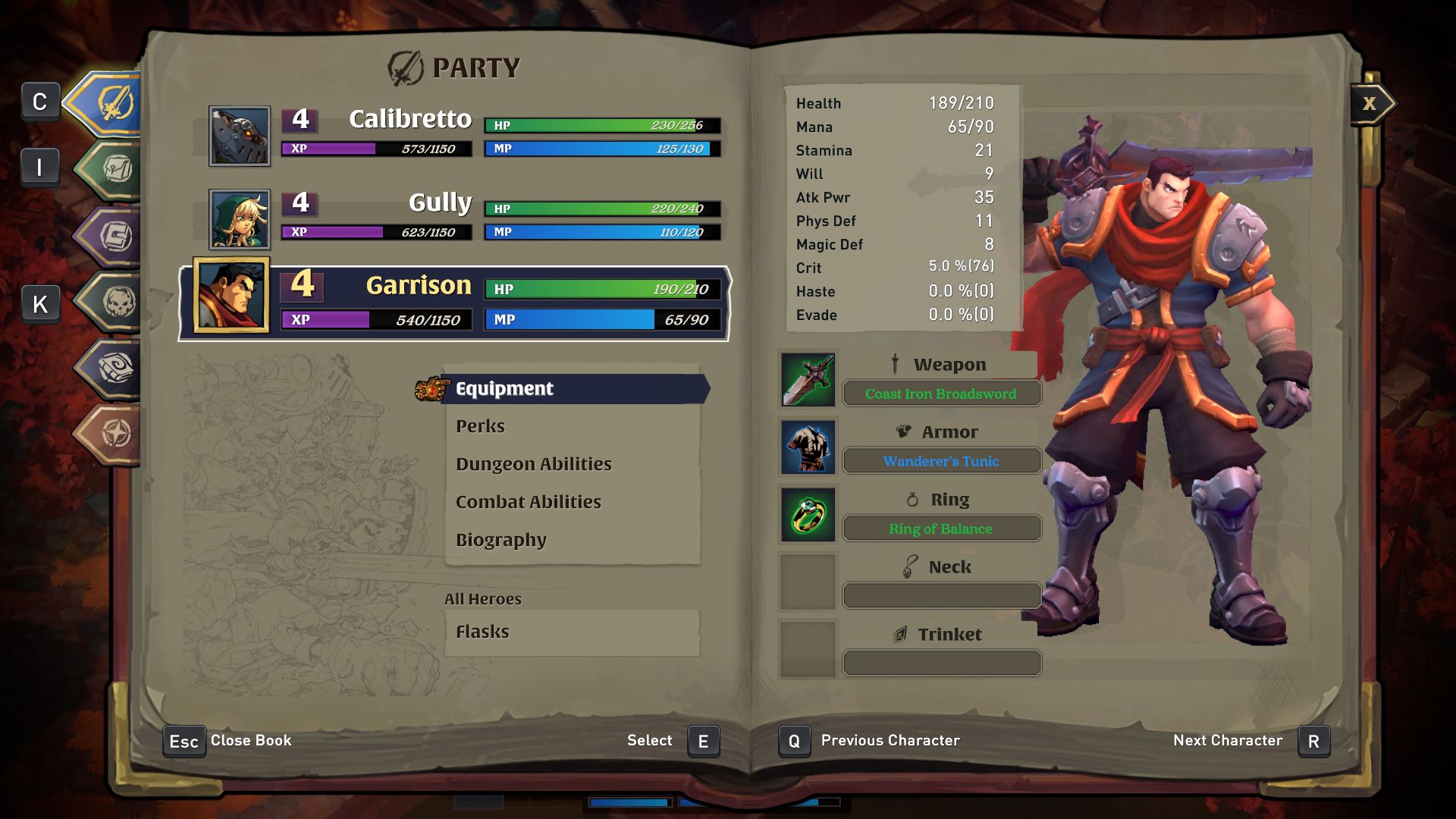 Battle Chasers: Nightwar is a fantastic looking game. The textures, models, animations, and special effects are all high quality. The game transitions nicely between the 2D comic book-style overworld and the more traditional 3D video game dungeons. The artists have done an excellent job reframing Battle Chasers’ western comic book art style as a JRPG. The animations and camera angles all scream original PlayStation era Final Fantasy. At the same time, the game still pays tribute to its comic roots by using comic book style dialogue boxes and keeping the models and textures true to the original work.

The audio experience in Battle Chasers: Nightwar is generally very good, except for the voice acting. The sound effects have a decent amount of variety. The attack sound effects have a very nice impact that pairs well with the heavy controller rumble. The soundtrack sounds a little more modern than the classic JRPG score, but it pairs nicely with the game. The voice acting on the other hand isn’t awful, but it isn’t good either. There are some voice actors who do a passable job, which makes the poorer quality voice acting even more obvious. I think the game may have been better off without any voice acting. 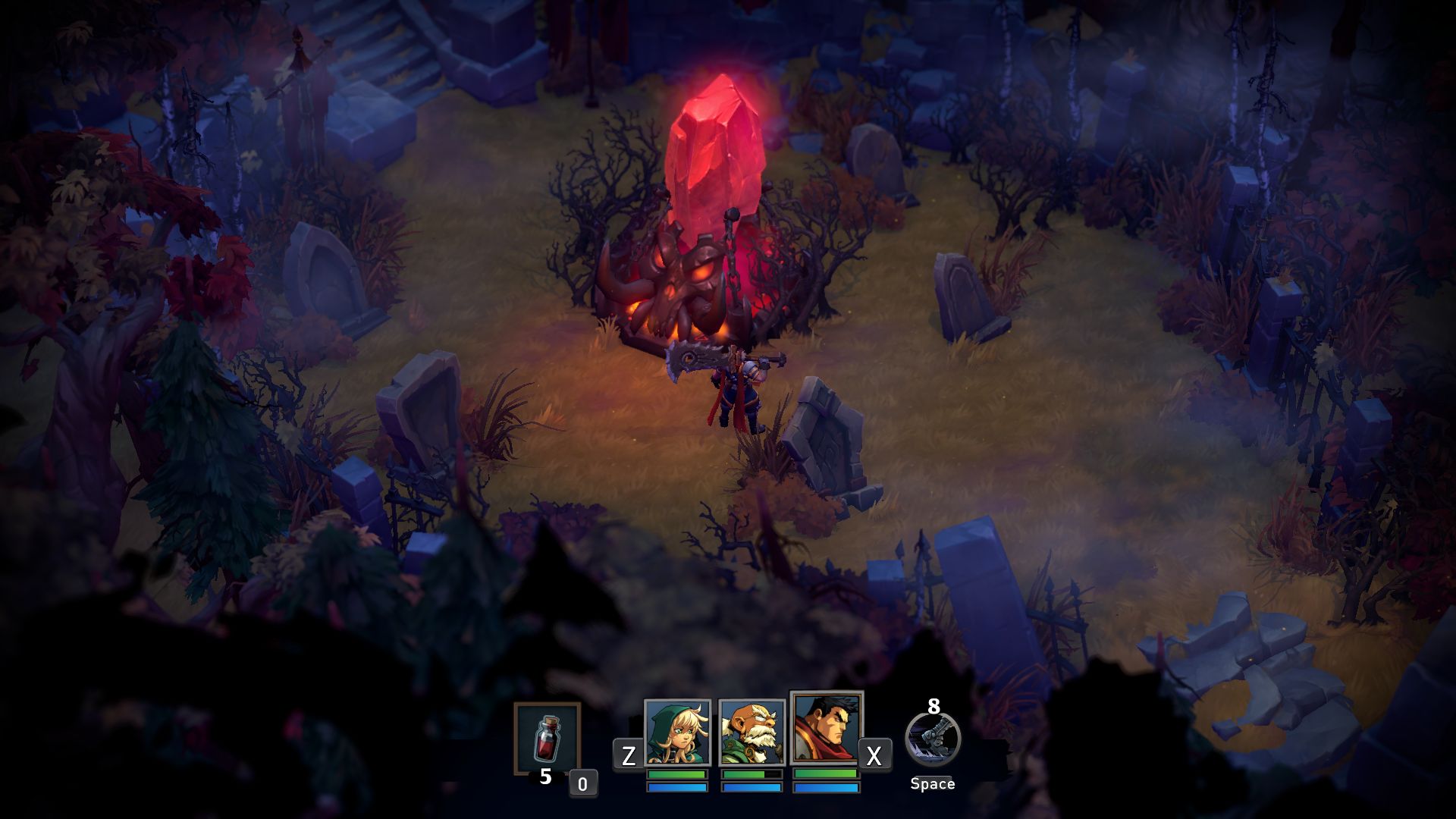 Battle Chasers: Nightwar is a very good JRPG that is slightly hampered by its slow pacing. The combat system will challenge JRPG veterans in an enjoyable manner. The level design is excellent, and the randomly generated dungeons provides plenty of replayability. The art style is an excellent example of East meets West aesthetics. Whether you are looking for the next installment of the Battle Chasers franchise after waiting almost two decades or you just like JRPGs, Battle Chasers: Nightwar is a solid choice.

Although a bit slow in pace, Battle Chasers: Nightwar is worth a purchase by Battle Chaser and JRPG fans alike.
8