Overview
Let’s be honest for a few moments. Major console and PC releases that get ported to mobile platforms are usually a hair better than movies that get a video game release and vice versa. Yes, I am looking at you Alone in the Dark movie. So can Batman Arkham City: Lockdown break out of a depressing trend and impress jaded iOS gamers?

Visuals
Batman Arkham City: Lockdown is a good looking game. Tested on the new iPad, the game ran as expected, without a single hiccup or slowdown. Graphics are slick and well done. However, there’s a lack of variety in the game. You will usually see at least two of the same generic thug in every level that looks exactly the same. I do like the fact that each of the four zones’ cannon fodder shares a common theme with their level’s respective boss. However, seeing the exact same thug you just beaten into submission a few seconds before can become irritating quickly. 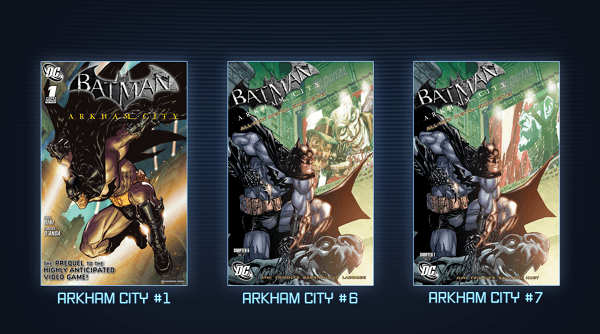 There is a distinct lacking of separate environments to fight in too. But they are so well done, filled with expected debris and junk scattered around as expected, it is easy to forget about it. I would have liked to seen a more interesting looking sewer level. It was probably one of the least interesting areas to fight in in Lockdown.

Batman’s animations however are impressive; many of them feel like they were copied straight from Arkham Asylum and Arkham City. Watching Batman pull off a successful counter move is both painful looking and utterly satisfying. One small complaint in regards to the counter moves is some of them are not correctly timed to the sound effects.One that comes to mind is Batman’s arm break counter. On the new iPad, you clearly hear bones crack before Batman applies any torque to the limb. It is a very small annoyance that can be easily looked over though.

Audio
The sound effects for Batman Arkham City: Lockdown are well done. Impacts from punches and kicks sound painful, broken bones can cause anyone to wince. The voice acting is also well done; although I am not 100% sure it utilizes the same voice cast from Batman Arkham City on the consoles and PC. Music is dark and intense, providing a good mood for fighting. Overall, Lockdown’s audio experience provides a polished package. 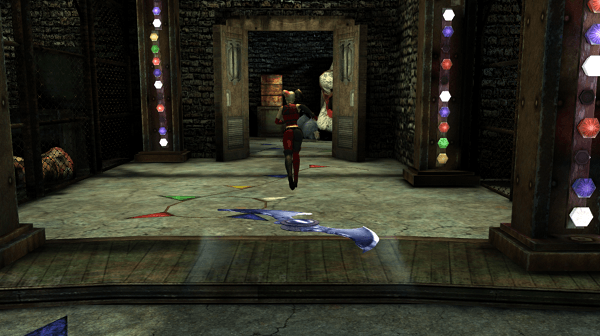 Gameplay
Unlike Batman Arkham City and Arkham Asylum, Batman Arkham City: Lockdown is purely a beat em up controlled by swipes and taps on the screen. Inevitably it will be compared to Infinity Blade II due to their similar gameplay and design. Controls on the most part are tight and responsive.

There are the odd times dodges (taps) and deflects do not register correctly, but these instances aren’t particularly common. But of course, Murphy’s Law demands these to happen at the worst possible times. But of course we can’t hold Murphy’s Law against the developer. 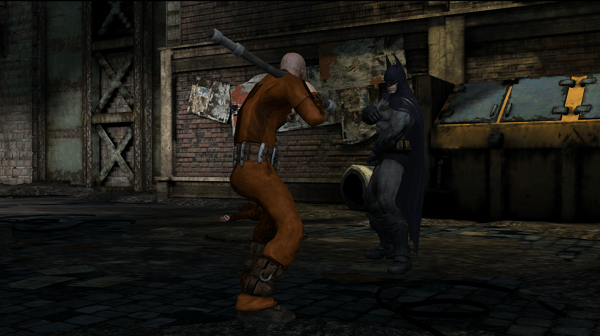 The RPG elements in the game allow you to upgrade Batman’s skills and unlock four gadgets to use in battle. The more skilled performance you do in a level, the more bonus experience you can earn. The upgrade system will allow you to play Batman the way you want. In addition to the RPG elements, different Batsuits will tweak Batman’s stats. They range from the cartoonie Animated Batman Series suit to Bruce Wayne out of costume and in a sleek business suit with a blue tie.

However, for the exception of the default and Bruce Wayne suits, these Batsuits will cost you 99 cents a pop. Additionally, extra WayneTech points to purchase upgrades for Batman’s gadgets and stats can be purchased in the app. The extra Batsuits seem to be fun value added DLC, but frankly purchasing extra WayneTech points seems completely unnecessary.

There are currently five levels broken down to three to four brawls against four to six generic thugs each and one boss battle per level. I find the generic thug levels to be rather repetitive and boring. The only game play variations with these fights is the odd thug that carries a lead pipe instead of brawling bare fisted. 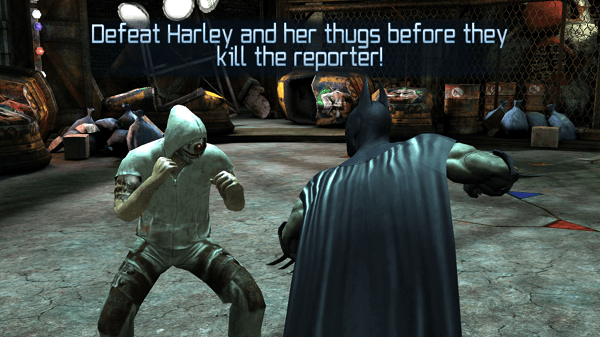 The game really shines during the boss fight levels. These fights have imaginative and fun twists to the brawling. Each boss has their own little unique little change up that make the fight memorable and fun. I only wish there were more of these boss fights. A full play through of the game will take half an hour to an hour depending on how skilled you are at the game. After completing the game, you can play the levels all over again with a cranked up difficulty level.

Overall
Batman Arkham City: Lockdown is a pretty good game that can hold its own against Infinity Blade II. Priced a dollar cheaper, Lockdown is a great alternative to Infinity Blade II. Although at times Lockdown is even more repetitive than Infinity Blade II, Lockdown adds extra value through its bonus content, packing in a smorgasbord of wallpaper and three full issues of the Batman Arkham City comic book. Currently the wallpaper is not available in the iPad Retina resolution, but I hope it will be added in a future update. Lockdown updates have already included a brand new level, adding the Harley Quinn level to the game. On-going updates for games are always a good sign. If you’re a Batman fan or looking for a fun beat em up game for iOS then definitely take a look at Batman Arkham City: Lockdown.