Overview
I’ve never played Bang! as a boardgame, although I can’t think as to why that would be because anything titled ‘spaghetti western’, ‘best-selling’ or ‘board game’ is usually pretty high on my purchase list. Still, I got the chance to fix this grave error, and got to do it on an iPad! So all is forgiven, self. There’s a certain love and delight which I believe should come with board games, its why I adore them, and why I am a sore loser. So lets see if Bang! managed to translate that to the mobile screen. 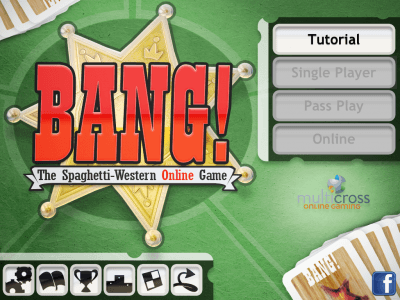 You have to play the tutorial when you first install which is good because if you don’t know the rules you will be as clueless as I used to be when I was a kid playing hearts and just moving whatever could be moved in the deck (referencing another classic card game just cos I can). If you already know the rules, just tap through and you can complain about that 1.4 seconds of your life that you wasted later. The tutorial takes you through a game that has clearly been set up to show you situations and its pretty awesome because it doesn’t feel like a tutorial half the time. Instead of taking you by the hand and pointing at things from afar, they let you do your own thing as well.

The default setting of five characters has two outlaws, one renegade, one deputy and a sheriff. Your goals differ depending on whom you play as, but unless you’re the deputy pretty much you just want the sheriff dead. Cue Bob Marley. The sheriff is revealed to all the players and then cue the tactical shooting and whatnot. 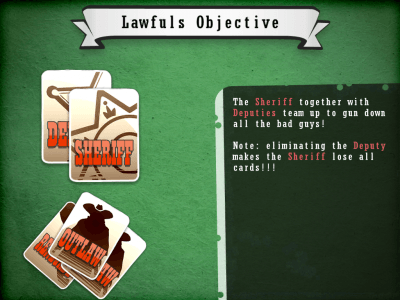 The controls are extremely simple, you select a card and drag. That didn’t stop me from doing things I didn’t mean to do like stealing the wrong card because while I was dragging I brushed past the top of another card, or accidentally shooting the sheriff when I was the deputy and was only trying to innocently pass my turn. The sheriff then thought I was an outlaw and proceeded to try and kill me for the rest of the game. I guess that is one of the downfalls of this game, shooting people accidentally. 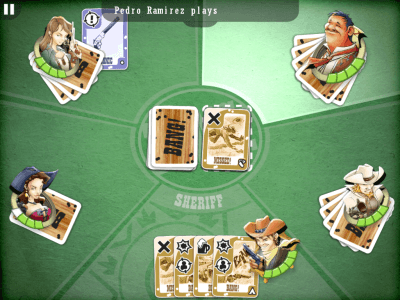 Another downfall that I’m only picking on because this is based on a real-life game, is that I can imagine in the original version most of it is based on bluffing. Playing a game with your friends, looking around the table, trying to make them smile or laugh as you make that final decision about who to shoot. Playing Bang! online, or by yourself, is like playing online poker. A key component to the game is missing, and its great for people who are good with probability but for those of us relying on charm and good looks, it ain’t gonna work out so great.

There is also a play and pass option, but it just isn’t the same! Plus, if you’re playing and passing you don’t get the chance to see some of the gameplay that might be of important tactical information. Also, I don’t like other people touching my stuff. 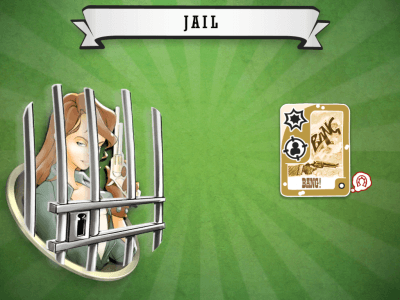 The best solution I can come up with is setting up an online game on portable devices and then sitting in a circle and playing like that. But then, the online connection isn’t super stable so you might experience some drop outs from the person sitting across from you.

Putting bluffing issues aside, Bang! does in fact do a great job at bringing on the interest and involvement. It isn’t too fancy so that it tries to pretend it wasn’t a card game, and it’s just fancy enough to make it suitable for online play. Plus, the amount of platforms they’ve brought it to is quite impressive, so if you do like playing online there are definitely plenty of people for you to play.

Visuals
The visuals are certainly stylised to Spaghetti Western, the characters all scream Western, from the well-dressed Southern gentleman, to the cowboys, to the belles who look like they could kill you while smirking seductively. Like I said before, there are animations, but they’re not over the top. There aren’t any cool-but-gets-old-quickly cut scenes to skip through, in fact a lot of the animations for things that happen are there for a second or two and then are gone. The developers seem to have had Gen Y in mind when they were designing this game.

Audio
I pretty much always play on silent, so it’s a huge compliment to the game when I can’t play on silent because I feel like something is missing. The audio for the game almost completes the game, it isn’t just some soundtrack that they’ve thrown in or thought was just about there, it is the game. The Western soundtrack that just brings the game to another level, the sound effects, everything is perfect for it.

Overall
In Bang! I have discovered a great, fun game. The rules of the original game stand well on their own, and this virtual version do bring some improvements in the way of well-placed animations and awesome sound effects and soundtrack. Multi-platform has really been brought to another level in this game, and that is definitely a huge credit to those who are into playing anonymous strangers on the internet (or friends, if you have them). The only downside is one that can’t be helped, it is the medium rather than the game itself.