Simple arcade puzzlers are a great and popular type of app, with a huge range available on the Apple store. Ball on a wall pocket is a new version of one of these arcade puzzlers, so the question is, how does it far in comparison to those already on the market? And does it set itself apart?

Ball on wall is, funnily enough, about a ball. There is a perpetually moving ball that you have to direct around using your power to make blocks appear, and your goal is to pick up as many bonuses as possible from pickups, cogs, special coloured boxes, and coins. 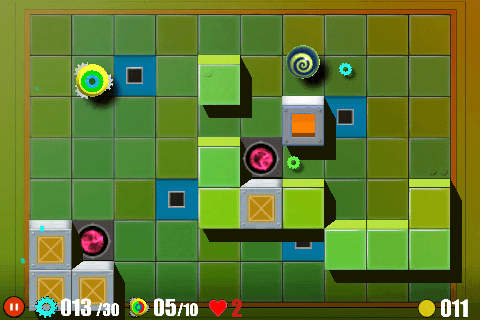 There are 10 levels with 5 stages to each level. The end of each stage comes with the collection of a final pickup, which are full of cogs that explode all over the stage when you hit the pickup. As you finish each stage you are given a score out of five stars depending on how many bonuses you’ve grabbed in the level. This depends on if you are willing to take your time in the stage, grabbing everything you can, or just racing towards the finish line and not risking the possible mistake which could send you back to the beginning of the level. Don’t worry too much though, you do get three lives and if you fall you’re reminded back to where you were before, heading in the same direction, and given a couple of seconds to get your bearings. 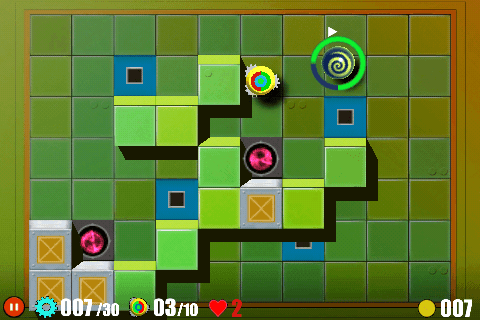 The ball continually moves around, changing direction when it hits a block, so to successfully navigate the wall you have to strategically place blocks. You can also make the ball bounce higher by touching the ball, up to three times after the ball touches a block. This is something you’ll find very useful for the higher, hard to reach bonuses. 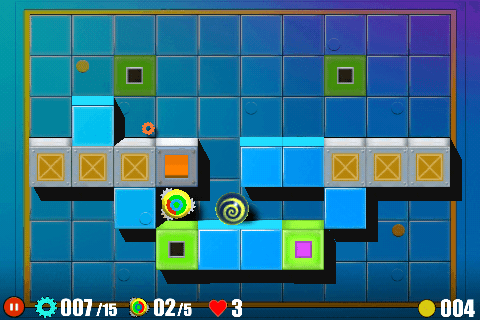 Getting good control of the ball is something that requires some practice, given that you have to get a feel for the momentum of the ball and how to react under pressure. However, unless you do try to get all five stars you’ll find that the challenge isn’t huge once you get a feel for how to successfully direct the ball.

There are a few things thrown in there, with certain blocks getting locked in or being unable to build blocks in certain places. These offer a little extra challenge, and can be quite annoying if they appear at wrong times, but with the three lives and the unlimited blocks ability, it didn’t phase me too much. 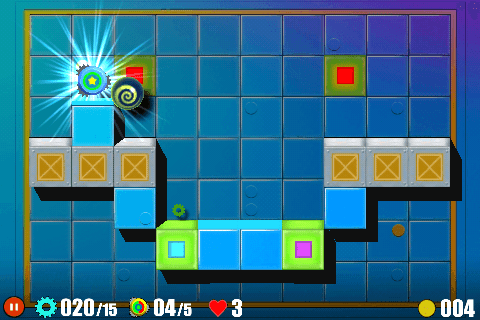 Visually, Ball on a Wall is a fairly simple game. There’s the ball, the wall, the blocks, and the bonuses. There is a nice 3D element to the graphics, but there isn’t really anything super flash to it. Not that that’s a negative, after all, that is the kind of thing you’d expect from a game belonging to this genre. 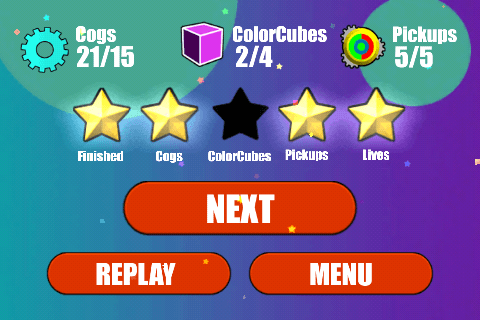 The menu soundtrack to Ball on a Wall sounds like something you’d hear in an elevator, or maybe at a jazz bar, with a bit of a synth twist. Fortunately the music does change within the game, since I don’t know if I’d be able to cope with jazz music while trying to navigate the bouncy ball. It turns into something that is reminiscent of an arcade game, complete with the sound effects when you bounce the ball or collect a bonus. There aren’t a lot of games that have a suitable soundtrack that I feel comfortable listening to while playing the game, but this is one of those where they’ve managed to pick it just right.

One of the main issues that faced the game in development was producing a version of Ball on a Wall that worked well on the smaller screen of the iPhone and iTouch. If I hadn’t already been aware that this game had spawned from a bigger predecessor I would not have noticed it at all. The game works perfectly well on the smaller device, and once you get a feel for how to control the ball smoothly, it is quite fun. However, the learning curve does peter out once you have learned ball control, and this means that rather than offer a challenge, after a couple of levels the game is simply just a fun way to pass the time.

Ball on a Wall Pocket is definitely a game to look at getting, especially if you love your old school-style arcade games.