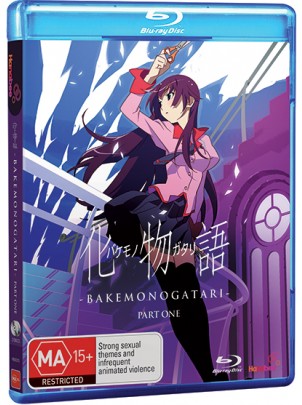 Overview
Bakemonogatari, a title that can be translated as “Ghost Story” is a fairly recent hit in the anime industry. The light novels written by popular author NisiOisin have spawned continued adaptations such as Nisemonogatari, Nekomonogatari and Kizumonogatari.

Bakemonogatari, the first of which to receive an anime, has been re-released in Blu-ray format by the folks at Hanabee. Previously, only the pricey import by Aniplex of America was available in rich 1080p. Is this bizarre, supernatural anime for you? If you’ve already seen it, is this the set to own? Read on to find out! 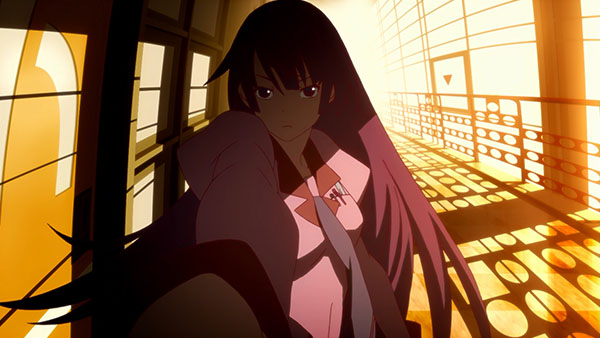 Story
The plot launches right away, leaving almost no time for the viewer to orientate themselves. Koyomi Araragi is a fairly normal high school student who happens to be part-vampire. Being the token nice guy in the anime, he gave his blood to save a vampire and in-turn sacrificed his humanity. Although Meme Oshino, a Shinto exorcist in a Hawaiian shirt, helped him become mostly human again with a few perks such as a rapid healing ability. This is already set up once the show starts, as Koyomi’s back story is only established with clues and offhand conversations. Speaking of conversations, these make up the bulk of Bakemonogatari and are arguably its main selling point. While some action does happen, the back and forth conversations can be intense if you can keep up with the flow. 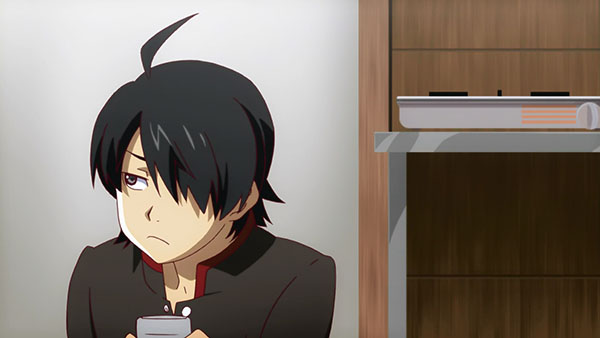 The series is split into several arcs as Koyomi meets various girls who are possessed by troublesome spirits, usually because they have issues themselves in some way or another. The typical harem elements are obviously here, albeit stylised upon with an art direction characteristic of SHAFT. You could almost call this a harem for classy folk. Ancient Japanese lore and superstition is heavily borrowed from, with paranormal ailments caused by crab, snail and snake spirits.

When push comes to shove during the rare action scenes, it’s simply spectacular. Possibly something of a mix between Tarantino and Sin City, you see limbs break and blood splatter viscerally. It’s really unique in this respect.

Bakemonogatari is riddled with frames of writing that offer clues and insights into character thoughts. These flash by way too quickly however, to the point where you’d have to pause to read everything. Being a subtitled-only release with no English dub, this makes it pretty much impossible to read. You can keep watching without reading these bits just fine, but it is disappointing as any normal person would simply miss this element in the anime. Personally I’m not prepared to pause what I’m watching every few seconds, but if you love these quirky aspects then more power to you. It makes for a unique experience at the least. 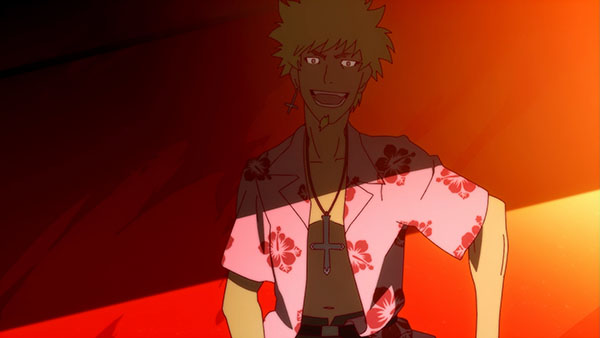 Another niggling issue is that the general consensus agrees with “Senjougahara” as the proper way to spell one of the girl’s names in English. For some bizarre reason the translation went with “Senjyogahara” which really stands out in the subtitles. Again, a small issue but it just doesn’t make sense given that it’s incorrect.

The plot and story arcs are the major focus here, with hints of an even greater back story. It is a little frustrating when characters keep referring to events that you haven’t seen or know about, though.

Visuals
Bakemonogatari combines modern and crisp animation with eclectic art design. Backgrounds and scenery are often jumbled, random bits of objects that are interesting to look at, if not making much sense. Bakemonogatari’s visuals fit perfectly with the direction of the anime. While the quick frames and shots are part of the show’s appeal, it does get tiresome at times. The quality has been beefed up from the previous DVD release to what you’d expect from a shiny Blu-ray that hasn’t been upscaled.

At the end of the day, this is top quality production and it’s hard to genuinely fault Bakemonogatari anywhere in its visual department. 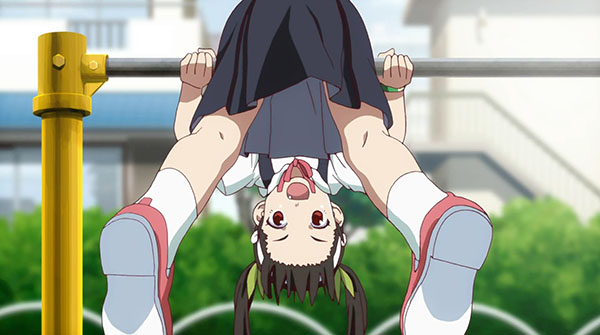 Audio
The music in Bakemonogatari is hard to pin. It’s probably best described as a mix of pondering, subtle tracks that match the atmosphere and help keep the conversations going. Melodies range from playful to the fittingly creepy as supernatural scenes play out. The opening and ending music themes are a treat to listen to as well. It’s a neat touch to have different theme songs for each arc, reflecting the girl Koyomi is busy helping. It has to be said that Kimi no Shiranai by supercell remains one of the best songs in the franchise.

This is a Japanese audio release with no English dub. While this is a minus, Bakemonogatari may be simply too “Japanese” to dub effectively. The show relies a lot on speech nuances, play on words and inside jokes to the point where I can’t see it working in another language, unfortunately. That being said, the Japanese cast perform outstandingly. 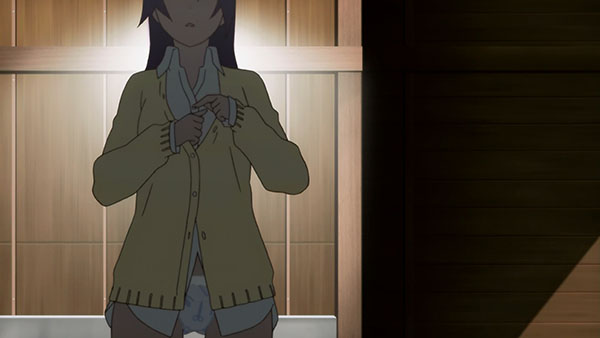 Extras
You might remember Hanabee released this is in a special art book format for the DVD version. Well the Blu-ray release, labelled Region B, is in a standard box this time which is a little disappointing. On the plus side the image quality is loads better, not just an upscale, and I think that’s a decent tradeoff. On the second disc you get a set of clean openings and endings which is great as there’s multiple themes in this show.

Audio Commentary from the voice cast is available and is a welcome addition. Part 1 includes 8 episodes and deals with three of the girls in the series. While eight episodes isn’t enough for a roughly full price release, it’s difficult when the studio decides to release an odd 15 episodes overall. 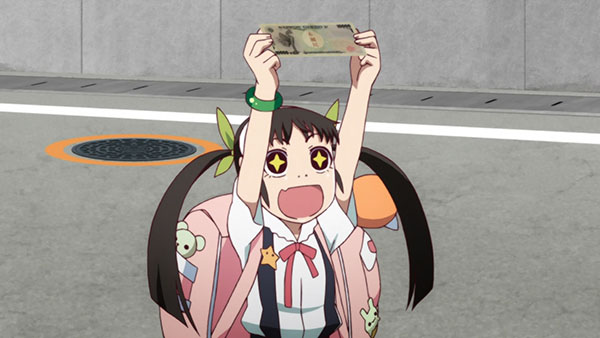 Overall
It’s surprising how popular Bakemonogatari became when it first aired in 2009-2010, and its rabid fans continue to reap the benefits in the form of multiple sequels and DVD/BD releases. This isn’t for everyone, particularly if you’re after a concrete, linear plot with action. I would call this an example of anime for hipsters, but that would do Bakemonogatari a disservice and unleash a horde of angry emails. Instead, I’ll say it takes the stereotypes of the medium and weaves them into a haphazardly brilliant piece of art that is sure to even make you laugh at times.

Part 1 wraps up the pretty brutal Suruga Monkey arc, with the only hint of what’s to come in the form of the remaining heroines, Nadeko Sengoku and Tsubasa Hanekawa. For the Western viewer, Bakemonogatari was the start of Studio SHAFTs fame that later culminated in the insanely popular Puella Magi Madoka Magica series. If you know and love the show, now is the perfect time to pick up Part 1 in crisp 1080p. If you haven’t seen it, well you should probably see it anyway, interested or not. At least you will know what all the fuss is about.