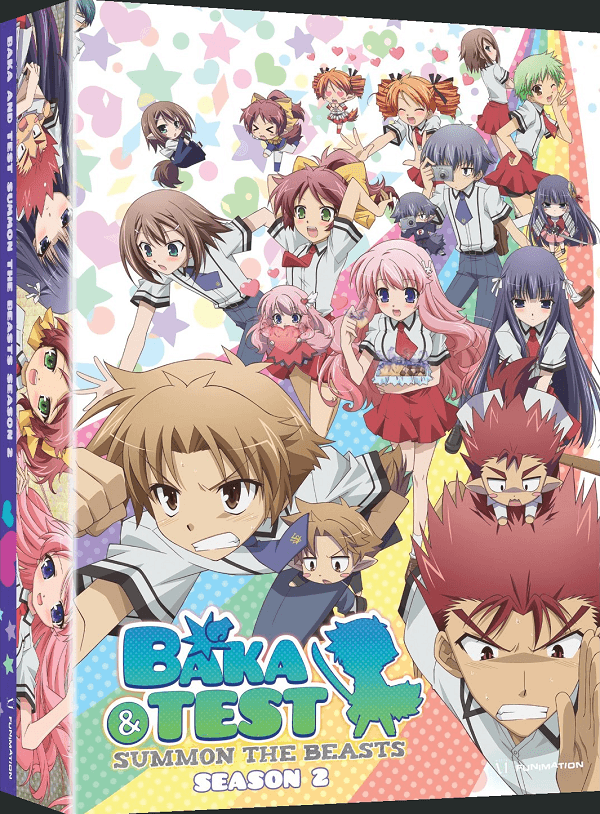 Overview:
Attending a school in an anime is always risky business. There could be a magical girl showing up at any minute or even a zombie apocalypse about to break out any day. Of course the whole purpose of school is to learn things and become better people, so why not throw in inter-class fighting to spice things up? Such is the case with Baka and Test and FUNimation has now brought the second season of the anime over to North America a year and a half after the first season was released. Is Baka and Test Season Two just as enjoyable as the first? Let’s find out.

Story:
In Baka and Test, a certain Japanese school called Fumizuki Academy has created a new way to encourage students to learn and strive for higher test scores. They have done this by creating a Summoning system that allows the students to summon Avatars of themselves to battle against other students, with their strength gauged by how well they have done on various tests. As such, these classes are ranked by grade, with Class A being the best, and Class F being the worst and to help motivate students, their school supplies match their grade. 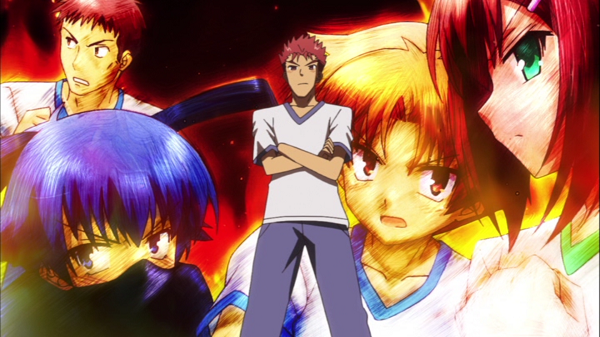 The story of Baka and Test revolves around a group of students who mostly reside in Class F and Season One provided a great introduction to not only the biggest idiot in the school Yoshii and his friends, but also the entire system. As such, Season Two makes no effort to actually explain neither the character relationships nor any of the past occurrences, meaning that viewers who jump into season two first will unfortunately be left in the dark regarding the summoning system and character history.

In fact, Season Two goes ahead and gets rid of one of your classic school-based anime clichés immediately by taking the main cast of characters and their friends to the beach for some classic beach antics, however whenever Class F is involved, things never are simple. Things take a turn for the worse when both Yuuji and Yoshii are blackmailed with a marriage proposal and cross-dressing image. In fact, that is only the tip of the iceberg for how crazy the lives of this group of friends can get. 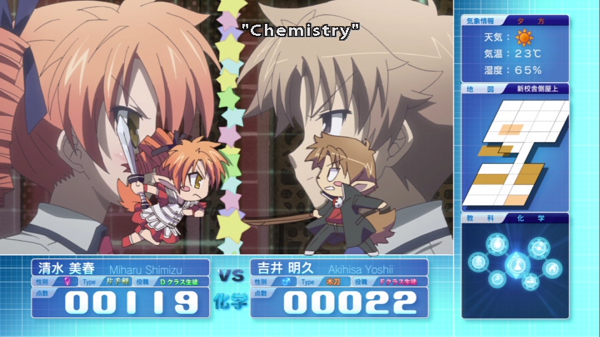 While the basic premise for the series may revolve around the various inter-class battles that Class F goes through, the Season Two of Baka and Test shifts away from focusing heavily on the summon battle system and more on character development and hilarious situations this time around. The reason for both Minami and Mizuki’s affections for the completely oblivious Yoshii is explored and expanded upon in touching episodes that while emotional and heart-warming, are still comedic throughout.

Ultimately the biggest draw for Baka & Test in this second season remains the charming cast of characters and downright hilarious situations they find themselves in. Yoshii remains as dumb as a sack of bricks, which may be insulting the bricks; Yuuji keeps up his cool-guy persona despite the fact that he is constantly being chased by an obsessed Shouko; Minami continues to angrily take out Yoshii while Himeji’s poisonous cooking rears its head often. These characters may seem rather cookie-cutter but when combined together, the comedic outcome is priceless. 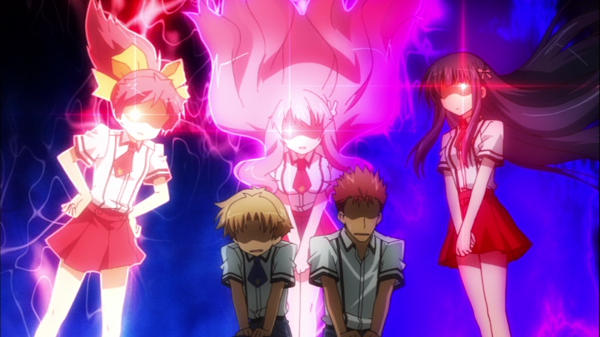 That doesn’t even touch upon the ever androgynous Hideyoshi making both guys and girls jealous and lovable pervert Kouta erupting into fountains of blood at the slightest hint of sexiness. As such, while Baka and Test Season Two may move a bit away from the summoning battles, the witty comedy, visual gags, well-crafted cast of characters and building love-triangle shine in the spotlight in Season Two and the result is a gut-busting anime that’ll leave you wishing this release contained twice as many episodes.

Visuals:
Something that stuck with me over a year and a half ago when the first season of Baka and Test wrapped up was how spectacular the series was visually. The combination of well-designed characters, great use of a wide-ranging color palette and impressive visual effects left quite an impression. Now Baka and Test Season 2 has taken everything that made the first season gorgeous and upped the ante. 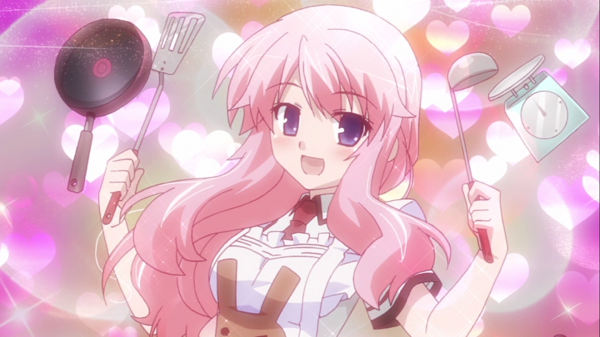 With what appears to be an increased animation budget, the series has never looked better than it does in Season 2. The anime continues to make use of the monochrome serious faces for certain gags and plenty of chibi looking moments for explanations, while the bulk of the anime makes use of a standard art style. This is not a bad thing however, as the characters are not only very expressive, there are also tons of visual gags spread throughout the season, many of which work wonders thanks to this art style.

Of course the chibified Avatars are back in full force, though rather than spend nearly their entire screentime battling against other Avatars, they are instead used more for comedic situations or even haunted house creatures. It is also worth noting that the atmosphere tone-shift whenever a summoning field is opened is still a treat as it provides a nice backdrop to any event occurring at the time, regardless if it is for action or for comedy. 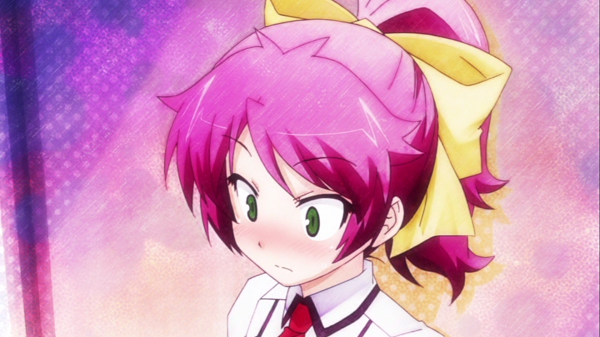 It is worth mentioning that while FUNimation did provide subtitles/translation for most of the inserted text in Baka and Test Season 2, the mid-card questions and answers from the characters were not given any translation, and the ending-card translation was left simply to standard voice over, not full translation of the image.

Audio:
As one would expect, FUNimation’s release of Baka and Test Season 2 contains both the original Japanese voice track as well as the new English dub. Considering this second season is being released around a year and a half after the first season, FUNimation has managed to retain all of the English voice actors and actresses from the first season. This is very beneficial to the anime thanks to the fact that the English cast does a phenomenal job voicing these characters. Alexis Tipton’s portrayal of the soft-spoken Mizuki Himeji is superb and special mention should go to Leah Clark’s great sounding German accent for Minami in episode eight. 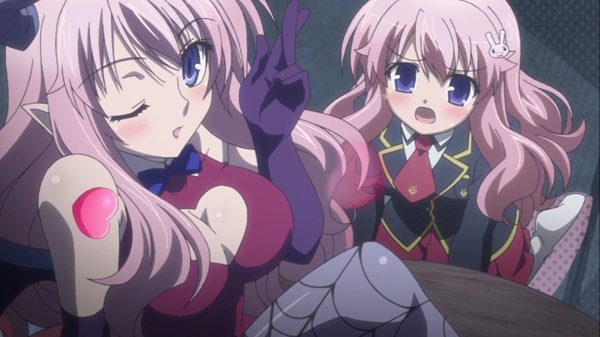 Baka and Test Season 2 sees some rather simple use of background music that, while catchy at times, doesn’t remain memorable and often is not noticeable. That being said, both the opening and ending tracks for Season 2 are excellent. The opening song is “Kimi+Nazo+Watashi de Jump!!” by Larval Stage Planning which is set to colorful animation that makes the opening difficult to skip, while the main ending theme is “Eureka Baby” by Natsuko Aso.

Extras:
As far as bonus features go, Baka and Test Season 2 actually comes with quite a few offerings, though only one of which is outside of your standard offering. It is worth noting that thanks to printing issues, we were only able to access these special features on the Blu-ray version of the show, though this is something currently being fixed by FUNimation and the final release will have both DVD and Blu-ray versions of these bonuses. 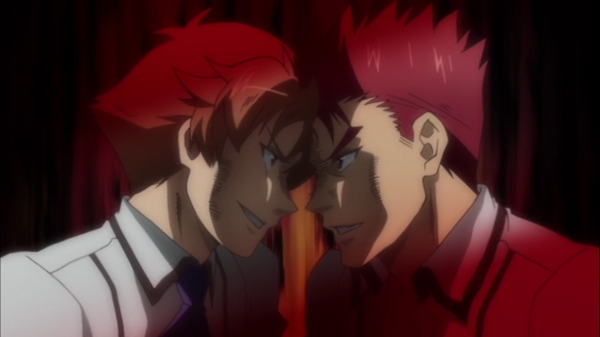 As for the extras themselves, there are two commentary tracks, one for episode 3 and another for episode 13, various promotional videos from Japan, a US trailer as well as previews for other FUNimation releases. There are also clean versions of the opening song, as well as the main ending song and the two special endings “Hi-Ho!!” and “Baka to koshitsu to kodoku mesh!.” Also found in these bonuses are nine three to six minute long videos called Baka and Test: Summon the Beasts Spinout! These videos contain the original Japanese dub only and feature chibi artwork of the characters in random humorous situations outside of the main story.

The commentary for Episode 3 sees Jamie Marchi, the lead writer and voice of Shouko and Brina Palencia, who voices both Hideyoshi and his sister Yuuko discuss plenty of technical aspects of the show. The two spend nearly the entire commentary providing some nice information about the recording process and how they go about getting into a certain mood-set with specific characters. While not very comedic and does not follow the episode at all, this commentary is certainly very informative. 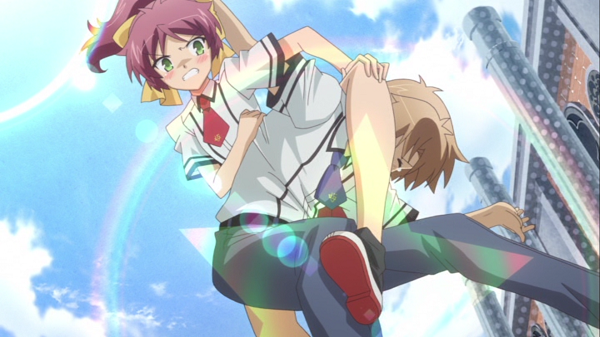 As for Episode 13, the commentary features two engineers so if you’ve heard past commentaries featuring engineers then you know roughly what to expect. This commentary stars Stephen Hoff who engineered the first half of the series and also Kevin Leisure who took care of the second half. The two discuss various things and even talk about a few other members of FUNimation’s staff, however most of it is unrelated to anime and can be very uninteresting at times.

Overall:
Viewers will find themselves more than happy to repeat a year and experience Baka and Test once again as Baka and Test Season Two takes everything that made the first season great and does it even better this time around. By moving the focus away from the battles and more onto character interaction, viewers are treated to an entertaining cast of characters that work so well together it will be impossible not to laugh at their misfortunes or become enthralled whenever things turn serious. With magnificent animation and character design, a stellar English cast and the well-developed cast, Baka and Test Season Two deserves high marks in almost every way.