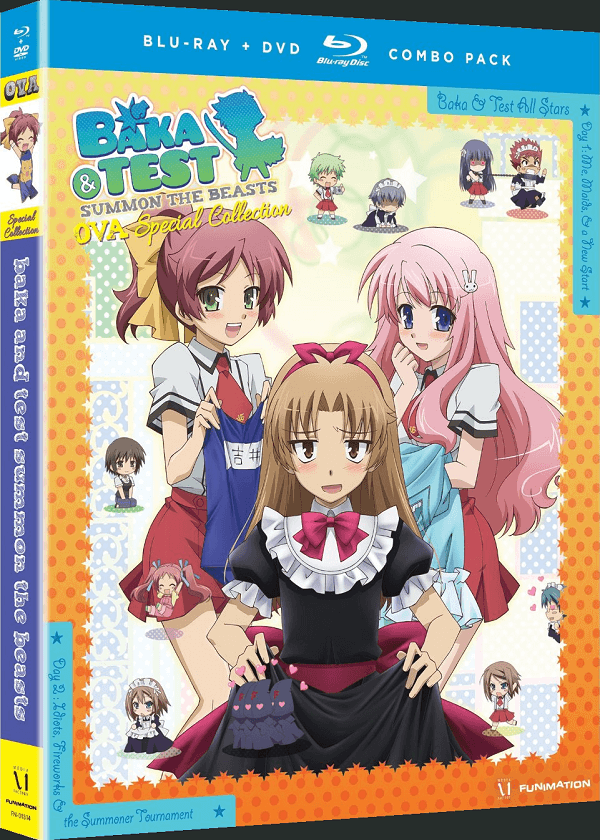 Overview:
Comedy is a fickle thing. While many may enjoy a joke or hilarious situation and find themselves in a fit of laughter, others may look at the same situation with disdain and turn away. Anime tends to be rather polarizing at times when it comes to comedy, either viewers will enjoy it or they won’t. However every so often a series comes along that has something for everyone. One such series so far has been Baka and Test. Following on the heels of Season 2’s release FUNimation has brought the Baka and Test: OVA Collection to fans. Does the series remain as amusing as before?

Story:
Before we begin, it is worth noting that knowledge of at least the first season of Baka and Test is required to understand most of what is happening during these two OVA episodes. That being said, the story of Baka and Test follows the life of a group of highschoolers who attend Fumizuki Academy, a school that allows students to summon Avatars to do battle with one another with their Avatar’s strength based off of their grades. As such, each student’s grade level, from A to F ranks not only their Avatar power and intelligence, but their learning environment as well. 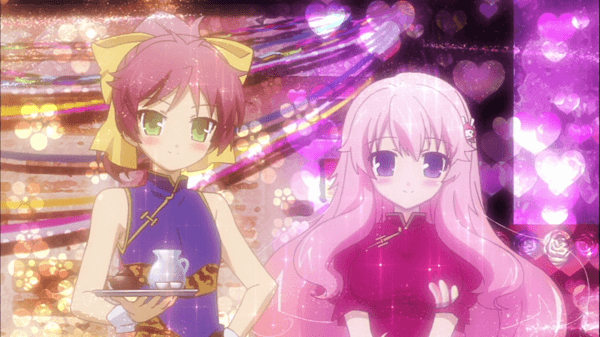 Because of this continuity issue, viewers should not expect anything in the way of story or character development that extends past the events of Season Two. In fact this OVA series does bring up a few issues mentioned during the second season that viewers simply may not have noticed were continuity problems in the first place. 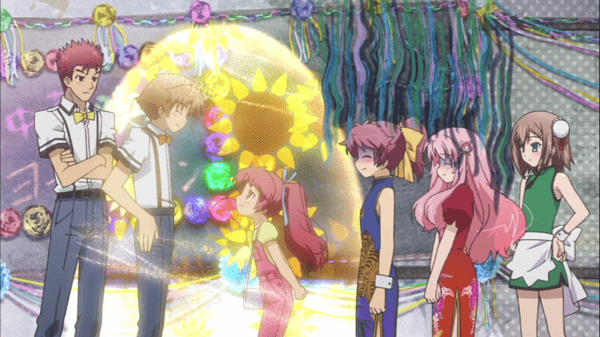 Anyways, this small OVA set features two episodes focused around the cultural festival called the “Refreshing Festival” that is held at the school once a year. Rather than preparing for the festival, the idiots of Class F spend their time goofing off but that all changes when they learn that Himeji’s parents are considering moving her to another school thanks to the poor learning environment provided by Class F’s dilapidated classroom and lack of learning materials.

As such, the group must try to raise money for better classroom equipment to show that Himeji should stay with Class F and not leave Fumizuki Academy. By creating a “Chinese Café European” the class actually starts pulling in money, however when two upperclassman start spreading terrible rumors and the school creates a Summoner Battle tournament where only the winner can buy equipment with their raised money, the idiots Akihisa, Yuji, Hideyoshi and Kouta must do what they can to make sure their class pulls-through. 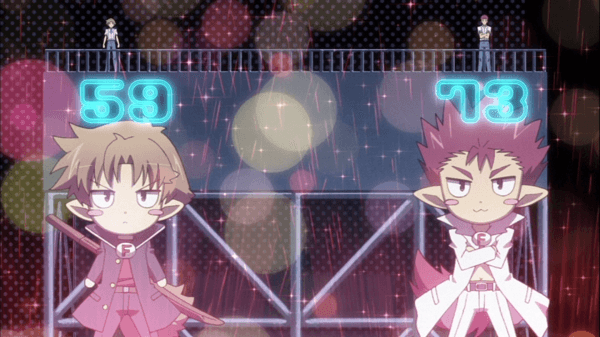 Altogether, these two OVAs represent everything that makes Baka and Test such an entertaining series. We have Akihisa being a dense idiot around Himeji and Minami and being physically abused, Yuji dealing with the overly obsessed Shoko‘s idea of marriage and more all wrapped up in two episodes. To make things even better, besides the show’s hilarious sense of humor providing plenty of laughs, there is a decent amount of action found within this small collection as the second OVA focuses heavily on the Summoner Battles. 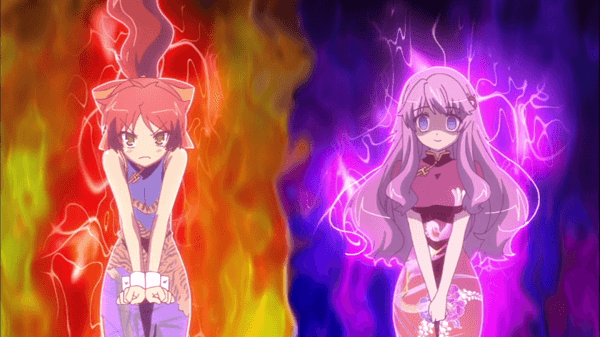 Despite the entertaining comedy found within these episodes, it is worth noting that this collection clocks in at under an hour with only two episodes contained in this release. While this hour is full of cross-dressing, blood-spurting hilarity, it does feel like these OVAs should have been included in one of the full releases. Other than Minami’s little sister Hazuki receiving some time in the spotlight, these couple of episodes could easily have been extras or an extension to one of the other Baka and Test releases instead of a standalone release.

Visuals:
Those looking for beautiful artwork need look no further than the Baka and Test series. So far the series has sported gorgeous character designs and a stunning art style and this set of OVAs is no different. In this OVA set viewers are presented with plenty of visual flair and sparkling scenes with a style that shifts depending on the situation. 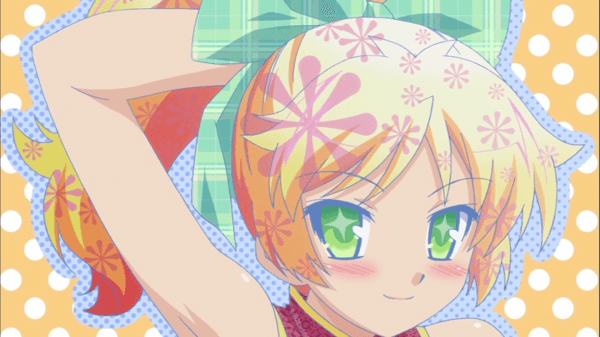 One moment the anime may feature the standard art style people have come to expect from the series, and the next it will shift to an overly dramatic and detailed scene to heighten the drama or highlight an important sequence. These scenes are augmented further by the fact that the Baka and Test series’ wide-ranging color palette featuring both bright and pastel colors is exquisite.

As mentioned earlier, this OVA set does feature a number of Summoner Battles which means that the chibi-fied Avatars return with plenty of style to battle against one another. While these fights are focused in only one area, they are presented with superb quality and consistent animation even when the scene is made overly dramatic for the sake of being dramatic. 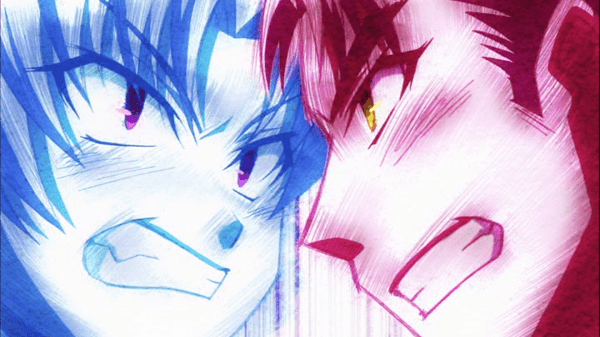 Once again however, it is worth noting that FUNimation did not provide a translation for a few of the mid-card sequences which originally featured a question and answers from the cast. While a minor gripe it is noticeable that this has been left out and viewers will probably be curious as to what these may have said and the jokes that they contained.

Audio:
The Baka and Test: OVA Collection comes with both you’re standard Japanese voice track as well as FUNimaton’s newly recorded English dub. As one would expect, all of the English voice actors have returned to voice their own characters and once again I am reminded on how well suited the cast is for voicing their characters. Tipton’s soft-spoken Himeji remains wonderful, though Josh Grelle and Scott Freeman take the lead as Akihisa and Yuuji this time around as the series focuses more-so on these two than before and their work with these two characters has never sounded better. 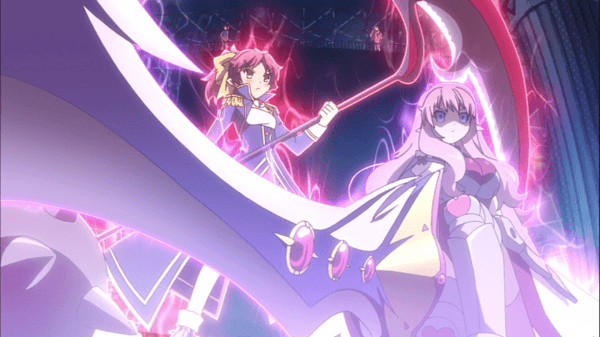 As far as the soundtrack goes, these OVAs feature suitable background music that works well with the scene and often helps accentuate the mood, though it can be forgetful. As for opening and ending themes, this set of OVAs features a new opening track titled “Renai Koujou Committee” by Natsuko Aso and a new ending titled “Getsuyou wa Kirai” by Milktub. The opening theme is rather catchy though the closing song is unfortunately something I found myself skipping through.

Extras:
Interestingly enough, the release of Baka and Test: OVA Collection sees the inclusion of no commentary tracks, something somewhat standard for FUNimation, but it does feature some additional Baka and Test content outside of the norm. Sure there are still promotional videos, original commercials, trailers for other FUNimation releases and a clean version of the opening and ending song, but there are also additions to each OVA’s ending. 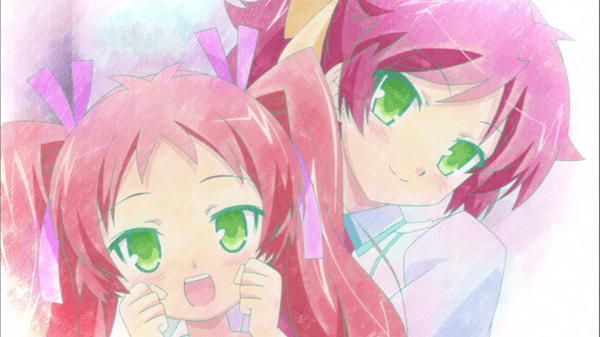 OVA 1 Split: Hideyoshi, Himeji and Minami sees the alternate endings for the waitress popularity system and how each of these characters react to winning the popularity contest. As for OVA 2 Split: Ending, it only features a slightly altered ending sequence that is barely noteworthy. It is worth noting that both of these OVA Splits are presented in Japanese audio only as FUNimation did not provide a dub for this extra content.

Overall:
The Baka and Test: OVA Collection demonstrates that even a small dose of a series is enough to  provide an hour of non-stop laughter. While this release would have been better suited at a cheaper price or placed in another season’s extras, there is no denying that these two OVAs are a great way to return to the halls of Fumizuki Academy with the lovable idiots of Class F. With a stellar English dub, beautiful visuals and enough hilarity to almost justify this separate release, no fan of comedy should go without picking this up.