Overview
It isn’t every day that a mobile game can take your breath away. But BADLAND does just that. It is a breathtaking game that can be enjoyed both casually on-the-go as well as in more serious gaming sessions. There is a certain magic to BADLAND thatis simply undeniable. What Frogmind have crafted is a beautiful game, that is as fun as it is absorbing. If you haven’t yet gone to the BADLAND, you are missing out on one of mobile gaming’s finest experiences. 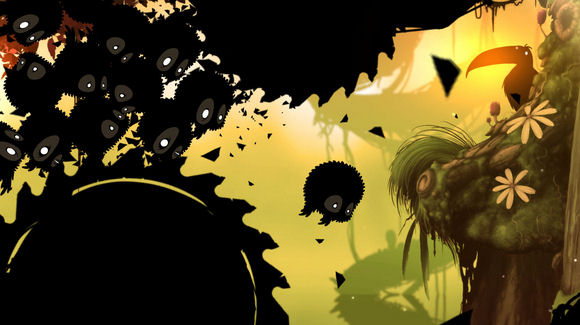 Gameplay
BADLAND is a simple game with an undercurrent on complexity, the likes of which are just about unmatched. It plays similarly to games such as Jetpack Joyride, with the player touching to fly and maneuver through the game’s awe-inspiring world.

With shades of Limbo and Rayman: Origins, BADLAND’s visuals feel just as much a part of the gameplay as anything else. With the darkened foreground, it becomes difficult to determine how an object will react to your presence or touch. Part of what makes this game so special is its world which feels so very alive. The small details of how the world reacts to you make this game all the more fun and simultaneously all the more challenging.

As you progress through levels in the single player mode, you will come across a number of different orbs that each have a different effect. Some orbs change your size to either bigger or smaller, others multiply your character forcing you to control a swarm of little critters. There are also orbs that change the way your character behaves, such as orbs that make him stick to things, roll on things or bounce off of things. All of this adds even further depth to the gameplay, creating multiple situations and possibilities for each and every level. The full extent of which is seemingly immeasurable, but regardless of that you have to use your head with this game otherwise your little critters will end up as mush.

The single player mode is very creative, with inventive level design that feels varied and complex. The game itself is relatively easy to play, with just about anyone being able to get a grasp of its mechanics, but it can be very difficult to master. 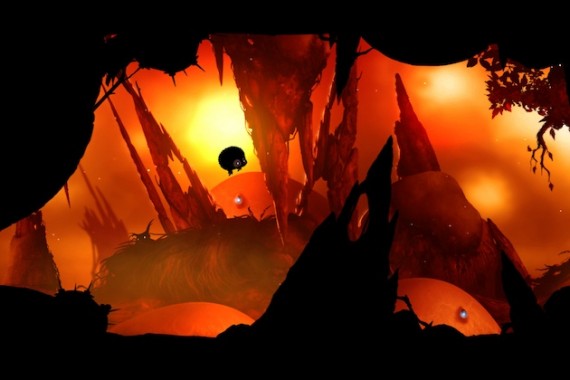 BADLAND’s also features a multiplayer mode which involves several players using one device for local play. On the iPhone the multiplayer mode can be rather frustrating as there is little room for each player to touch with players being designated a certain portion of the screen. I feel that this mode would work far better on the iPad, but it was still very much playable and enjoyable on smaller devices such as the iPhone.

This game is addictive to its core, it will hook you in and drag you into the BADLAND for an experience you’ll not be able to forget.

Visuals and Audio
Make no mistake about it, BADLAND is a beautiful game through and through. It is atmospheric, with an ominous tone that is counterbalanced with the cute design of the fluffball protagonist. The shadow drenched aesthetics serve BADLAND well in immersing the player into this mysterious yet compelling world. It is a visual delight that is among the best looking mobile games on the market.

The soundtrack of BADLAND is suitably dark, with slow moving tracks that build tension and excitement with the deftest precision. Using droning sound effects BADLAND builds upon its visual atmosphere with ease, bringing the game’s mood full circle. 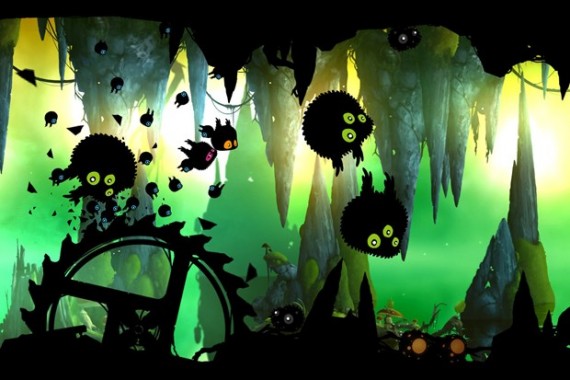 Overall
If there is a mobile game out there as unique and captivating as BADLAND, I haven’t found it. This is a game that comes along once in a blue moon. With BADLAND, Frogmind have stamped out a place in the mobile market as one of the platform’s most inventive developers. This is a game that must be played. It proves that mobile games can be just as deep an experience as any other game. BADLAND is many things, but bad is not one of them. It is simply phenomenal.