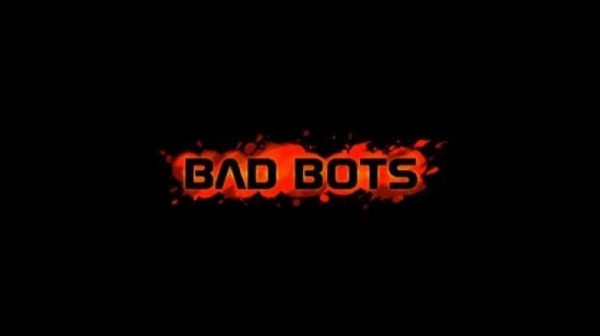 Bad Bots is a side scrolling platform shooter set aboard the “Titan Hauler” – A space faring cargo ship on its way to Earth from some exotic, undefined interstellar location. You play as Sam McRae, a grease mechanic who wakes from cryosleep to find the vessel under attack from a seemingly endless torrent of killer robots. Not only this, but the ship also happens to be inconveniently plummeting straight in the direction of Earth. Sam must fight his way through the ship’s structure to try and save our beloved planet and rid the vessel of its unsavory boarding party. It’s essentially Captain Keen on steroids. 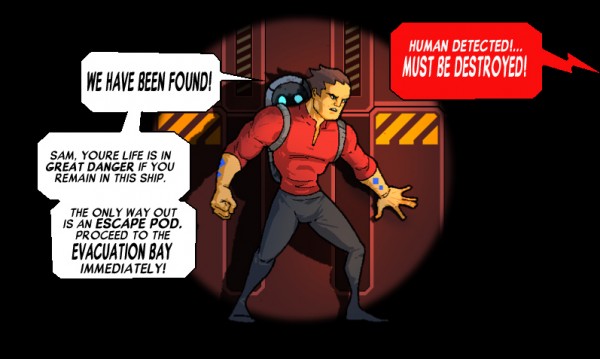 Although a storyline is present it’s clear that this is not exactly a ‘narrative-driven’ title. Indeed, side scrollers in general aren’t exactly known as facilitators of deep storytelling, and this case is no exception. Most of the plot is communicated through a series of XIII style comic strip cut scenes that work much like a PowerPoint presentation. Don’t get me wrong, I quite liked the comic-strip visual style, but the need to click every time I wanted to read the next speech bubble wore thin after a few seconds. I caved in the end and skipped the opening cut scene entirely. It seems therefore as though the Bad Bots story acts as a purely functional device, a means of letting the player know roughly where they are, what needs shooting and which direction to move in (although in the first level that isn’t exactly clear.) 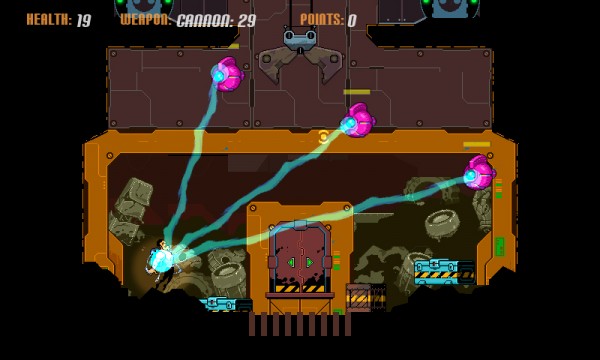 Now, this is where the game hits the mark. Although a side scroller, the inclusion of a very modern control setup removes the feeling of claustrophobia often afforded by the genre. It’s not simply a straight run and gun deal (like say, Metal Slug) – Instead, there are switches, elevators, ventilation shafts, obstacles and traps to avoid, the list goes on. In terms of weapons, Sam has access to several weapon classes and powerups throughout the game, although he may only carry two at any given time. One of the most interesting features (for me personally) was the melee weapon that is first acquired in the game. A mighty axe, used to smash in vents, open crates and leave many, many robots ‘cleft in twain’ about Sam’s feet. The controls are intuitive and in keeping with most FPS keyboard control schemes and feel intuitive right off the bat.

In terms of replay value, the game comprises of a single player campaign and a challenge mode. A simple survival mini game with three levels of difficulty. Of course, I went straight for the hardest difficulty, and then things swiftly went downhill. The only thing that prevents the challenge mode and indeed, aspects of the single player from being any fun is the presence of one class of enemy, a red robot that carries a knife and runs about 18x faster than your character. Also, when attacked by more than one of these particular NPCs, you immediately lose the ability to move, shoot and jump. Add to that their immense spawn speed and you’ve got yourself the perfect recipe for sheer, unbridled rage.

I will say however that the presence of save stations in the single player mode works to counter these frustrations somewhat and also helps to remove the arcade-ish feel communicated by the 90s pastiche artwork. 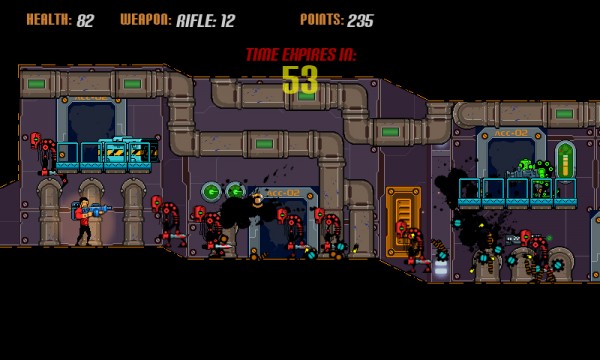 Speaking of the visuals, which emulate the graphical style of Windows 95 titles like ‘Wolf 3D’ and ‘Captain Keen’ – I must admit to developing an attachment to Bad Bots on the sole basis that it caused me to ‘nostalgia hard’ for the first few hours of play. Huge praise should go to the animators and artists who put together the stills used in the cut scenes, as they really do add to the presentation of the story in a medium that doesn’t really allow it.

In terms of audio, I have to admit to being a little disappointed. The sound quality is in keeping with the visual style but there appears to be only three to four sound effects present in the whole game. There’s the open door sound, which also doubles as the elevator sound, the save station sound, and anything else remotely mechanical, sound… Then you have all of three different types of ‘blip’ to represent your gunfire. I was hoping for some repetitive arcade-esque MIDI music to pulse away in the background, but instead there is none, nothing at all. This is especially noticeable when you have no idea where you’re supposed to go next, and so you wander around for twenty minutes in silence going back through rooms you’ve already visited. With only the ‘door sound’ punctuating all of your frustrated efforts. 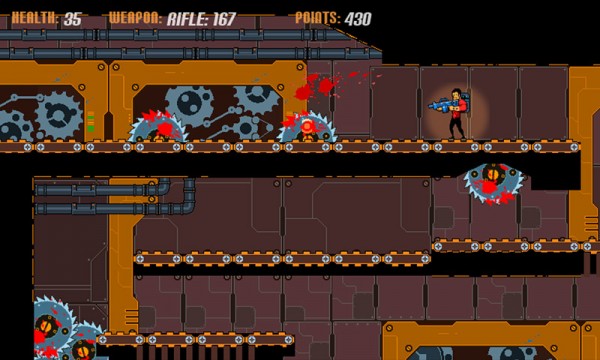 Generally, Bad Bots is a well put together and highly enjoyable retro styled indie title brought to us by a small development team. They have successfully married the chaotic visual and combat elements of the side scroller shooter against proven modern control schemes to create a deeper experience. The result is a strange “I’ve been here before” sensation coupled with several genuinely surprising “oh, nice.” moments. I would definitely recommend giving this game a chance. But I will say this, don’t expect to get lots of replay value out of the challenge mode, as it’s no Nazi Zombies.